Why would a company tell its customers to not download its latest offering? Because that version includes a nasty bug that can’t be quickly fixed.

On 27 February 2013, Amazon released version 3.6.1 of its Kindle iOS app and then quickly recommended that users not apply the update due to a “known issue with this update.”

Updating forced you to log back in to your Amazon account, removed all titles from the device, and marked them as New when you downloaded them. However, it still retained your last-read location in the books.

How is a situation like this possible? When a company submits an update to Apple for release in the App Store, it must wait for the update to be approved. In this case, an installation bug slipped through that Amazon probably couldn’t fully test against.

But once an update is submitted to Apple, the developer can’t do anything to fix such bugs other than re-submit another update that corrects the problems — which must again go through Apple’s review process.

The only other action Amazon could take was to change the release notes, which developers can do easily. And then wait for Apple to approve the new version. Unfortunately, users often don’t read the release notes, although at least the iOS App Store app has made it easier to do so on the iPhone. In an earlier version, you had to tap exactly on the tiny What’s New triangle, which was nearly impossible; now you can tap anywhere on the app’s name to show the release notes. 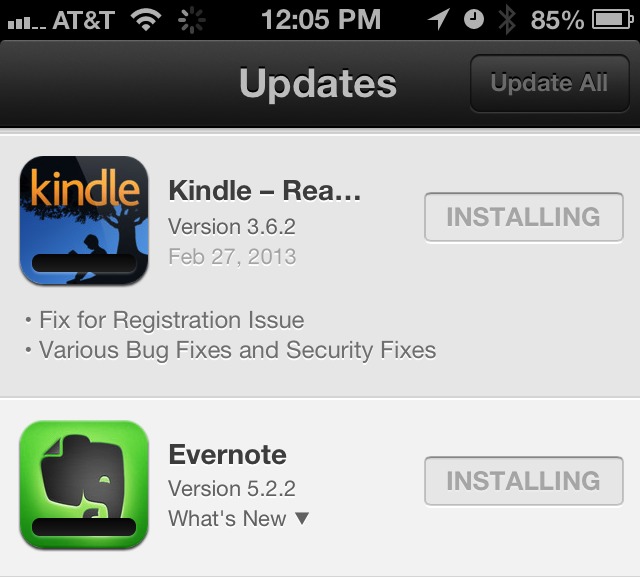 To reduce the impact of similar bugs in the future, Apple could make it easier for users to revert back to a previous version. As Matt Neuburg pointed out, reverting manually is possible, provided a couple of conditions apply: that you update apps only via iTunes syncing and that you don’t empty the Trash after updating. If so, you can pull the previous version out of the Trash and swap it with the one in your Mobile Applications folder.

But if you’re like me and hate to have badges appear on the App Store app icon, don’t be so quick to update everything. This isn’t the first time unexpected bugs have appeared in updates, and won’t be the last.