In the ongoing saga of excessive cellular data usage, the furor seems largely to have died down over the past few months, presumably as Apple has silently fixed bugs in iOS 6 — I personally haven’t had any runaway data days since upgrading to iOS 6.1 (see “Mysterious iOS 6 Cellular Data Usage: A Deeper Look,” 24 October 2012). But I’m willing to bet that there are people still experiencing problems who are either suffering quietly or who have adjusted their habits (such as by toggling cellular data manually) to compensate. For anyone who remains concerned, the good news is that the DataMan Pro iPhone app that tracks
cellular data usage has once again reappeared in the App Store (see “Track Per-App Data Usage in iOS with DataMan Pro,” 20 November 2012). For a limited time, the $9.99 app is available for half-price, at $4.99.

DataMan Pro has a checkered history in the App Store, having been pulled by Apple — after initial approval and significant sales — not once, but twice. The problem is that DataMan Pro needs to do things that Apple doesn’t approve of — notably run in the background and read various internal log files. Apple removed version 6.1 of DataMan Pro from the App Store because it implemented a voice-over-IP client (which can run in the background) but was not primarily a VoIP client. Yes, it was an attempt to work around Apple’s restrictions, but any system that restricts developers from providing the useful features that users want invites such workarounds.

The new DataMan Pro 6.3 switches to a different approach, and the bad news is that not being able to use the VoIP trick means that some of DataMan Pro’s most compelling features have been removed. Notably, there’s no more hourly, daily, or weekly tracking — both overall and per-app usage stats exist only at the monthly level. Regarding the more-granular tracking, Johnny Ixe of XVision, DataMan’s developer, told me:

“We needed to leave it out so that we could overcome the technical constraints that Apple imposed on us. Since we can’t use the VoIP mode, we can’t reliably display hourly stats. Daily tracking has also become more challenging, and so we left it out to negate any objections from Apple and to get DataMan Pro back quickly. We were hoping that Apple is more receptive of this “less detailed” app watch. And we were right — they approved DataMan Pro again. We hope to bring daily stats back in the future.”

The other hassle required by the new version is that you must open DataMan Pro before any restart to maintain accurate data. Opening it after restart is not necessary.

On the plus side, DataMan Pro is far more attractive than in the past, featuring a color-coded main screen that provides an at-a-glance sense of how in danger you are of exceeding your monthly data cap. More than just a simple green-yellow-red color coding, DataMan Pro’s Smart Forecast feature predicts how likely you are to remain within your allotted data limits at all times, taking into account both how much data has been used in the month, and how close you are to the end of your billing cycle. So if you’re at 90 percent of your limit but have only 1 day remaining in the month, it will be green to indicate that you have nothing to worry about. However, if you hit 90 percent with 21 days remaining, it turns red to warn you that
you’re extremely likely to go over your limit.

Swiping up from the main screen reveals a list of per-app usage details (cellular only), along with location pins. Settings are available by swiping left in the main screen. 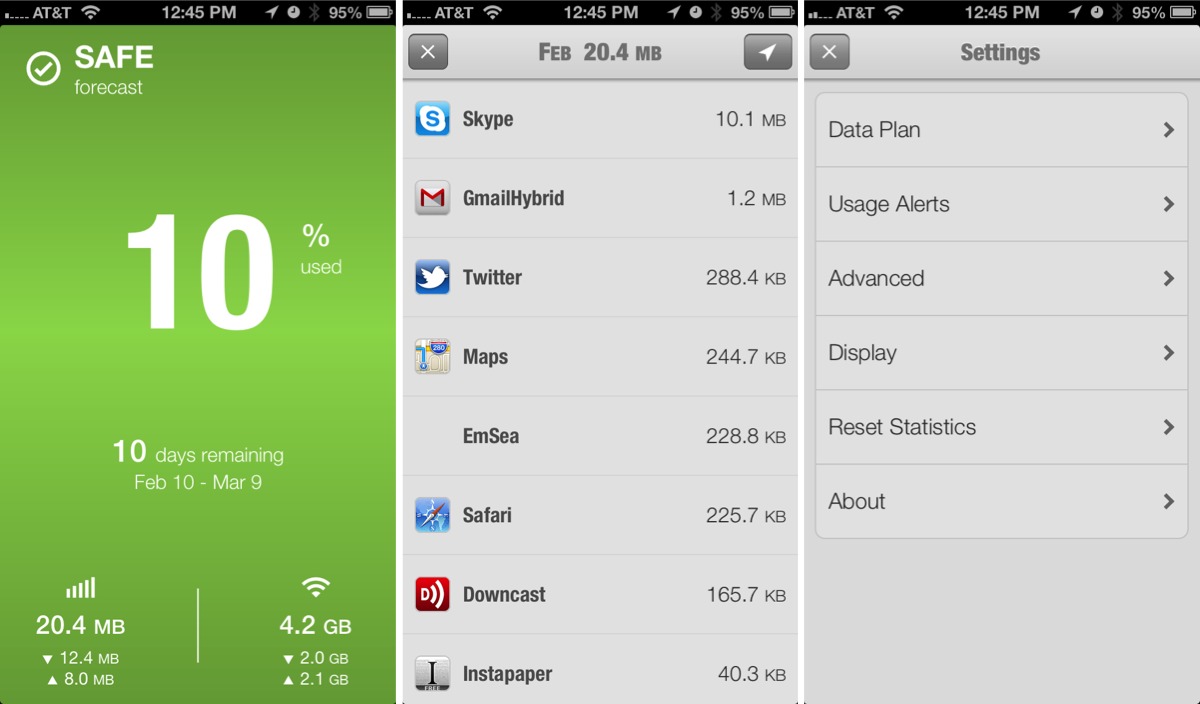 Even though DataMan Pro 6.3 is far more attractive than in the past, and is one of the best options for tracking cellular data use on the iPhone, the loss of the more-granular tracking features is disappointing. If you have DataMan Pro 6.1 and rely on those features, I recommend avoiding this update. If you don’t yet own DataMan Pro for the iPhone, version 6.3 will provide more guidance than iOS’s built-in reporting, and we can hope that XVision is able to get those features past Apple’s restrictions in a future update.