I seem to have accidentally created a Twitter sensation by rearranging the icons on my iPad’s home screen. What started as a silly late-night tweet turned into a surprisingly big deal.

First the picture, then the story. 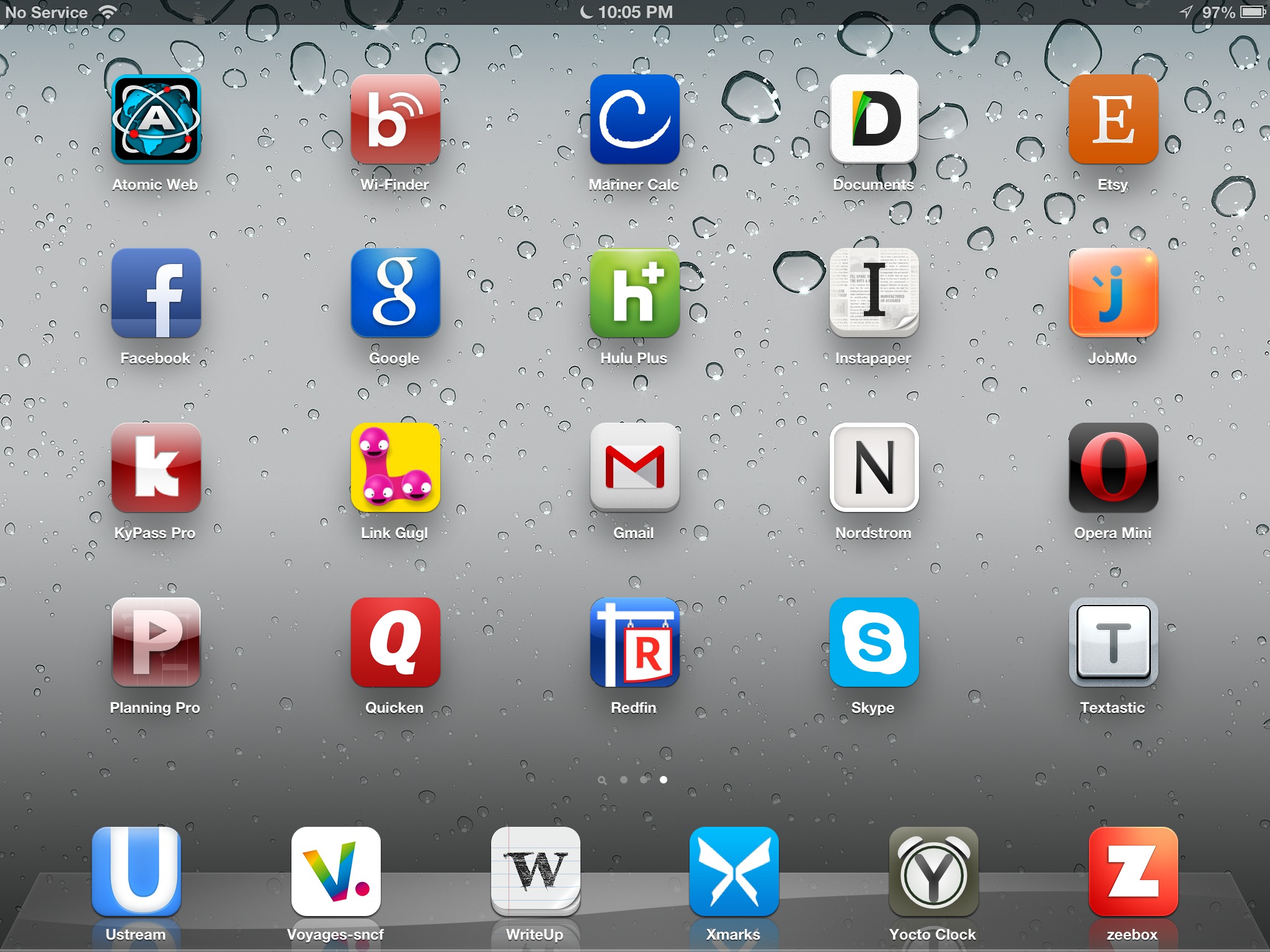 It was around 10 PM and I was supposed to be writing. (Yes, I have odd work hours.) I couldn’t decide whether to work on the overdue outline for an upcoming Take Control book or an overdue TidBITS article. Faced with that difficult choice, I did what I usually do in such situations: I procrastinated.

I had noticed many times before how many of the apps on my iOS devices have icons consisting mainly of a single letter, and I had occasionally entertained the idle thought that maybe someone could spell out the whole alphabet that way. So, with no more motivation than wanting to waste 10 minutes, I found all the apps I’d ever downloaded whose icons fit that profile and put them in order. There were maybe 18 or 20 of them. A few quick searches in the App Store turned up apps whose icons supplied the missing letters — and better yet, they were free downloads. It just so happened that, including the Dock, there were 26 possible slots. Perfect! I took a screenshot, sent it to Twitter, and that was that.

I noticed that two people — Macworld’s Jason Snell and my wife — retweeted me almost immediately. I thought that I might receive a couple of “har-har” comments, but nothing more. Now that it was 10:10, I figured I should abandon the whole work idea after all and just go watch TV with my wife. So I walked from my office into the bedroom, where Morgen’s first words were, “Holy cow, you got retweeted 93 times!” I was agog. Together, we watched as the numbers of retweets and favorites kept growing. By the time I went to bed a couple of hours later, I’d been retweeted more than 1,000 times. I woke up to find that my Twitter handle @joekissell had trended overnight in both the United Kingdom and Australia. Within three days after that tweet, I had over 3,800 retweets, the tweet had been favorited more than 1,200 times, I’d received hundreds of replies, and I’d gained about 160 new followers.

My use of Twitter is casual at best, and prior to what I’ll now refer to as The Incident, I had just over 1,200 followers. Maybe celebrities with gajillions of followers see this kind of retweet action all the time, but for me it was shocking. Nothing I’ve ever produced in any medium over more than a decade as a professional writer has ever come close to generating as large a flash of attention or response as this one tweet.

Because the tweet went out late at night, Pacific time, the first wave of responses came mostly from people in Europe and Asia. A number of replies were in French, which I could read, or in German, which Morgen could read. I used Tweetbot’s Translate feature to tell me what people were saying in Italian, Russian, Greek, Korean, Polish, Turkish, and other languages. Many of the responses were along the lines of “Cool!” and “Brilliant!” (thanks very much), but there were also quite a few criticisms (all of which, I assume, were tongue-in-cheek). For example:

The crazy thing is, I actually thought about this stuff in advance. I could have taken greater care to select apps that were especially popular or meaningful, or whose icons were clearer examples of the letter in question. As a recalcitrant perfectionist, that’s exactly the sort of thing I normally fret about. But I figured a throw-away tweet like this simply wasn’t worth the effort. It would do the trick as is.

More interesting to me were comments pointing out how unoriginal my screenshot was. Admittedly, I didn’t research prior art before tweeting; I went entirely by the fact that I hadn’t seen this before. And indeed, no one showed me another example of the alphabet on an iPad screen as such, but without question many other people have had similar ideas, some of which were far more elaborate than what I attempted:

So, props to all the iOS app icon artists who came before me, as well as to those who will come after me and, no doubt, improve upon my work. Well done.

I enjoyed my moment in the Twitter limelight, but it does raise another question for me: Does any of this do me any good?

Social marketing mavens stress the importance of gaining Twitter followers and using Twitter as a marketing tool, but my personal experience — as well as our experience using Twitter for TidBITS and Take Control — is that marketing is just not what Twitter is good for. For example, despite the numerous tweets sent out and retweeted by several accounts to many tens of thousands of followers about my latest book, “Take Control of Your Passwords,” only two people purchased the book after following a link from Twitter. And both of those were existing Take Control customers who would have found out about the book another way, even without Twitter. This is
consistent with our earlier experiences, and similar to the results we see from Facebook.

What I conclude from this is that although social media is great for a number of things — it allows news and entertainment (including funny screenshots) to spread rapidly — it’s probably not going to help the average non-celebrity achieve fame or fortune, or even sell a handful of books. I’m happy to have the additional followers, of course, because it’s always nice to have someone listening when I tell a joke. But I think “social” is exactly the word here — Twitter is a fantastic forum for chatting, and a poor one for inducing people to take actions in the real world, including buying things.

One final note. The fact that I could so easily find apps whose icons were a single, slightly embellished letter (and that for most letters, I could have selected among several) tells me that the world’s app designers could stand to be considerably more creative. Developers, if you’re thinking of putting a single letter on your app’s icon, I’m here to tell you that’s not a way to stand out from the crowd.

Comments About The iOS App Alphabet