CloudPull 2.2 — Golden Hill Software has updated its CloudPull Google-data backup application to version 2.2 with several improvements. First off, its snapshot feature switches from using OS X’s Versions to storing both current and previous backup snapshots within the CloudPull database file, which should reduce the amount of disk space that CloudPull uses. Because this adjustment requires a change in database format, CloudPull needs to migrate your data into the new format when you first open version 2.2, which could take from one to several hours depending on how often you set snapshots to be saved and how many you
elected to keep.

The Mac App Store version of CloudPull has now been sandboxed, which requires a change of location for your backup files, modifies the behavior of starting CloudPull at login, and removes the CloudPull Monitor (these changes are detailed in full in a Golden Hill blog post). Additionally, CloudPull has been split into two apps in the Mac App Store: CloudPull Premium and CloudPull Free (the latter of which has been available since mid-January 2013). CloudPull Free enables you to back up a single Google account for
an unlimited amount of time, and it provides an in-app purchase option to upgrade to CloudPull Premium for $9.99 (which supports up to 10 Google accounts and has the capability to run in the background). The direct download trial version from the Golden Hill Web site now has the same terms as the Mac App Store CloudPull Free version (unlimited backup of a single Google account). CloudPull 2.2 now requires Mac OS X 10.7.5 Lion or 10.8.0 Mountain Lion or later (with support for 10.7.0 through 10.7.4 removed). ($9.99 new, free update, 11.9 MB, release notes)

Default Folder X 4.5.7 — St. Clair Software has updated its Open and Save dialog enhancement utility Default Folder X 4.5.7 with a single fix to resolve a conflict with the BetterTouchTool gesture utility (and other mouse drivers) that caused file dialogs to hang in some instances. This version follows the release of Default Folder X 4.5.5 earlier in the week, which fixed an issue that caused the menu bar menu to fail to respond on occasion and corrected a problem with inconsistent rebound functionality after launching or switching between applications. The update also adds Quick Look previews to the Default Folder
X’s contextual menu within Open and Save dialogs (accessed via Control- or right-clicking). ($34.95 new, $10 off for TidBITS members, free update, 11.4 MB, release notes)

Read/post comments about DEVONthink and DEVONnote 2.5.1.

Evernote 5.0.6 — In the midst of a week with a major data breach, Evernote has released version 5.0.6 of its information management app. The update redesigns its menu bar helper, switching from a simple list of menu items to a new Quick Note entry scheme that enables you to create a note directly from the menu bar. You can activate it by pressing Command-Control-N when in any application (previously, invoking this command opened the Evernote app and then opened a new note window.) In addition to simply typing text, you can drag documents and images into the Quick Note menu bar window and add annotations. And you can still take
a screenshot (either full screen or a just a clipping) or add an audio note. Other changes include the added capability to select multiple tags from the sidebar by Command-clicking, improved speed for larger pasting operations, and a new feature for Premium subscribers that promises improved searching through Office documents. 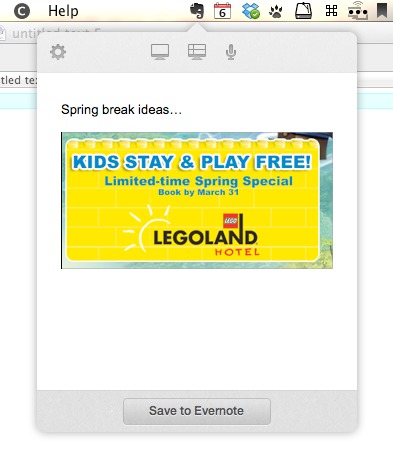 Discovered on 2 March 2013, the data breach exposed some personal information of Evernote’s 50 million users, but the company says there was “no evidence that any payment information” was accessed; nor was “any of the content you store in Evernote was accessed, changed or lost.” For the time being, all passwords are being reset, which means that you’ll be prompted to create a new password the next time you open Evernote (even a version
previous to 5.0.6). (The press release gives a couple of tips for creating a new password, but you can go deeper with password security and learn how to manage passwords with Joe Kissell’s new “Take Control of Your Passwords.”) Going forward, Evernote told InformationWeek that it is accelerating plans to implement an optional two-factor authentication process. (Free from Evernote or the Mac App Store, 34.6 MB)

ScreenFlow 4.0.3 — Telestream serves up a heaping helping of bug fixes with version 4.0.3 of its ScreenFlow screencast recording app. Amongst the highlights of the nearly 50 changes, the update ensures that recording in Mirrored mode works with VGA outputs, fixes a bug that multiplied the mouse image when recording Java, keeps the duration window at the right side of a project, updates localizations, and fixes an issue with the Mac App Store version that prevented exporting to Windows Media format. (Note that the Mac App Store
version is still stuck at version 4.0.2 as of this writing.) For a complete rundown of the new features, download the PDF release notes from Telestream’s support page. ($99 new from the Telestream Web site or $99.99 from the Mac App Store, $29 upgrade from version 3 or earlier via Telestream, 27.7 MB)

GraphicConverter 8.5.3 — Lemkesoft has released GraphicConverter 8.5.3, featuring a mix of new additions and welcome bug fixes. The update adds the option to geotag images from the map view (which also adds a search field), a new Copy EXIF Tags to IPTC Caption feature (as well as an option to open a separate IPTC window in the browser), batch support for image catalog creation, and an option for defining overlap printing width. In the user interface department, the update adds a command that enables you to move your cursor left or right without invoking the command for image change, and lets you use the
default display behavior for zooming or scaling after an image change. The release also fixes a bug that affected the import of uncompressed PSD files (a glitch that bedeviled one TidBITS staffer), a problem with GIF loop detection, a possible memory leak in image-to-QuickTime conversion, and an issue with renaming files in the browser that switched names from lowercase to uppercase (and vice versa). ($39.95 new from the Lemkesoft Web site or $38.99 from the Mac App Store, 150 MB, release notes).

Java for OS X 2013-002 and Java for Mac OS X 10.6 Update 14 — Less than two weeks after its last Java updates, Apple has released Java for OS X 2013-002 for OS X 10.8 Mountain Lion and 10.7 Lion and Java for Mac OS X 10.6 Update 14 for 10.6 Snow Leopard. Apple’s security page notes that these updates address two critical vulnerabilities (CVE-2013-0809 and CVE-2013-1493), the latter of which has been actively exploited to, according to Oracle,
“maliciously install the McRat executable onto unsuspecting users’ machines.” Once installed, McRat can then download further malware onto the affected computer. Both updates bring Java SE 6 up to version 1.6.0_43. The updates are available via the App Store app or Software Update and direct download, and Apple reminds you to quit any Web browsers and Java applications before installing either one.

If you don’t rely on Java for any critical apps, it might be time to remove Java entirely from your system. Over at Macworld, Rich Mogull recommends doing this, and describes how to extricate it from your Mac. If you need Java to run an app (such as the CrashPlan backup utility), Rich also explains how you can isolate Java by disabling it in the Safari, Chrome, and Firefox browsers. (Free, 63.8 MB and 69.3 MB)