Google says it will shut down the Google Reader RSS aggregation and synchronization service on 1 July 2013. (For simplicity, we’ll use the familiar term “RSS” to mean both the RSS and Atom news feed formats, and the overall ecosystem of syndicated news feeds.) This comes despite the fact that Reader reportedly generates more traffic for publishers than the company’s Google+ service. It’s bad enough to lose the Web client, but because many RSS app developers relied on Google Reader to handle syncing and update retrieval, the future of many independent RSS readers is in doubt. This includes the venerable NetNewsWire for Mac OS X, currently owned by Black Pixel. (For more general pondering about what the Google Reader shutdown means, see Adam Engst’s “Thoughts Prompted by Google Reader’s Demise,” 14 March 2013.)

Developers, including Zite and Digg, are scrambling to fill the gap left by Google’s announcement. The RSS race is on, and we’re sure to see new developments by the time Google Reader goes dark. However, that does little to help Reader users now. Fortunately, several existing products can ease the pain of transition. Paul Bradshaw of the Online Journalism Blog posted a call for comments on Google Reader alternatives, and was
then nice enough to compile a spreadsheet of the results that lets you check out the field and compare competitors.

Get Takeout from Google — First things first. Export your subscription data from Google Reader so you have the flexibility of switching to another RSS reader at any time in the future. Google offers a direct method via its data portability site, Google Takeout. Visit the site, login if prompted, and click the Choose Services button. From the list of buttons that appears, click Reader and then click Create Archive. The file won’t be huge, but it will probably take a while for Google to build it. If you get tired of waiting, you can select the “Email me when ready” checkbox and do something else as it builds.

The Google Reader export is compiled as a downloadable Zip file. Inside are several JSON files with various metadata, but most important is the file called subscriptions.xml. This is an XML file in the OPML format, a standard import and export format for RSS readers. You can import this file into just about any RSS client to restore your Google Reader subscriptions. 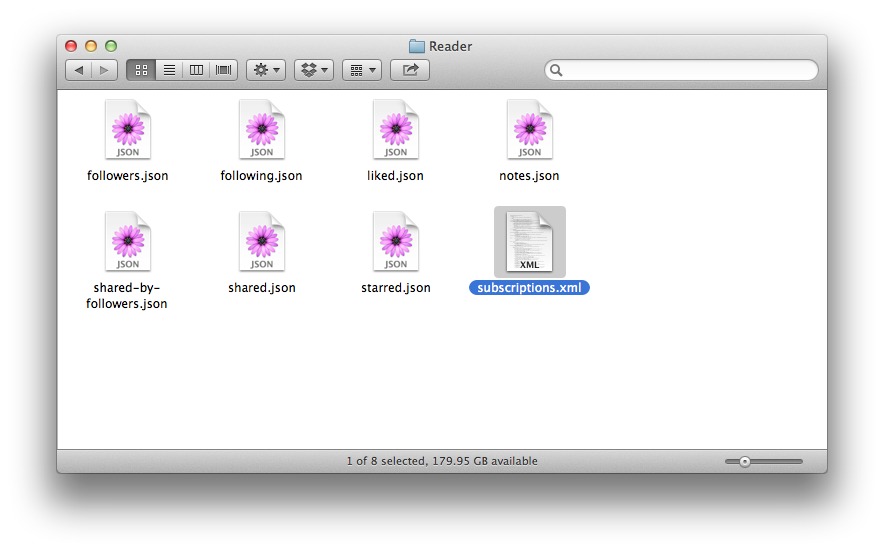 (If you use NetNewsWire and sync with Google Reader, you can export your subscriptions locally. Make sure you have performed a sync and then chose File > Export Subscriptions to create an OPML file.)

Feed Me an Easy Solution — If you’re looking for a one-click transition, your best bet is Feedly, a Google Reader client that comes in a variety of forms, including a Web client, Chrome extension, Safari extension, Firefox add-on, iOS app, and Android app. Log into your Google Reader account from a Feedly client, and it presents your subscriptions in an attractive, magazine-like format that’s particularly nice on touch screens. 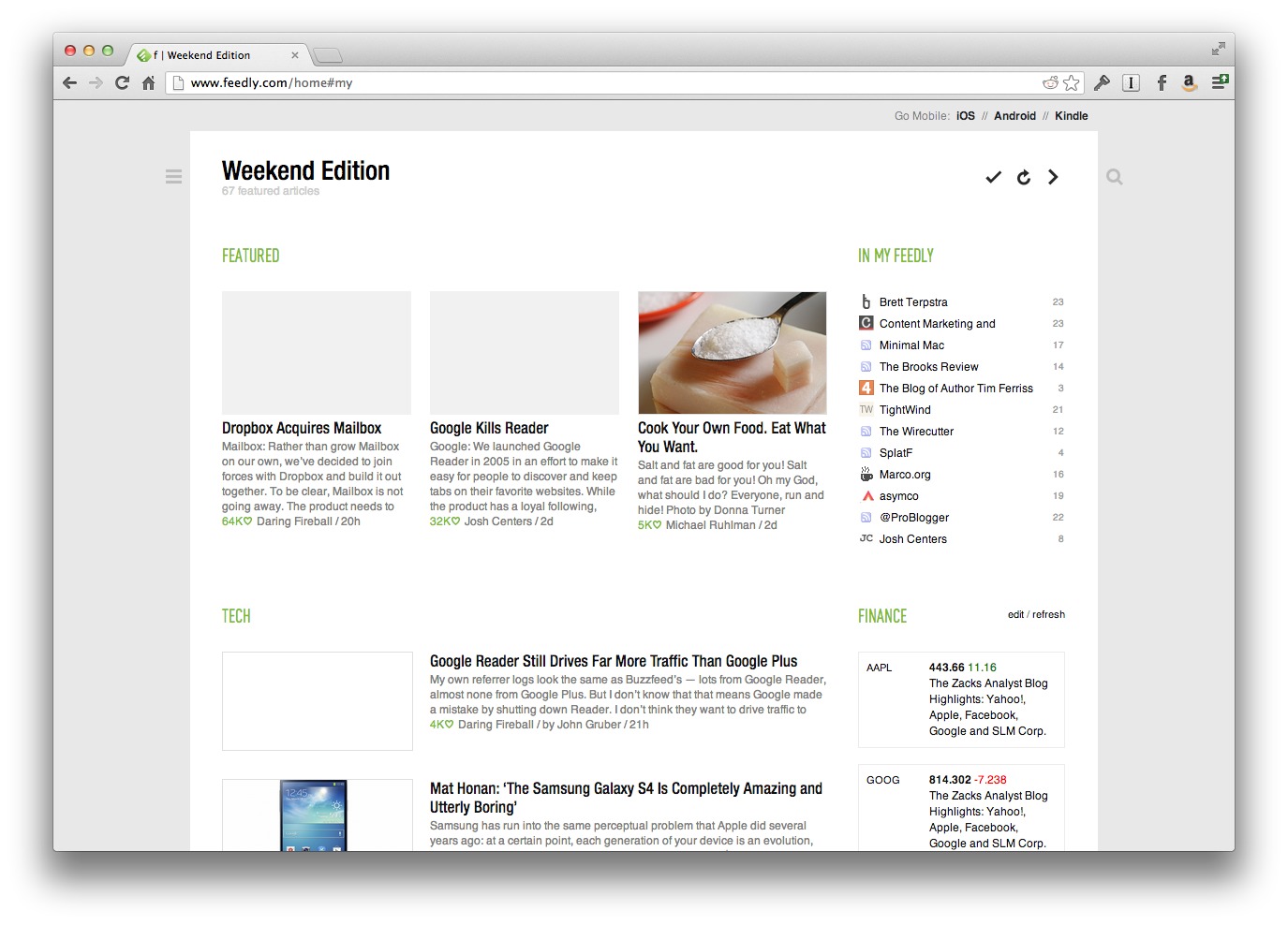 What’s most compelling about Feedly isn’t its looks, but its upcoming Normandy service for synchronizing your subscriptions between devices. When Google Reader shuts its doors, Normandy will take over on the back end, in what will hopefully be a seamless transition. Other developers can integrate support for Normandy, too.

Run a Fever — Nice as Feedly is, it requires that you rely on yet another company for your RSS-reading needs. If you can handle a bit of system administration, Fever is worth a look. Fever is a self-hosted news reader and feed aggregator. It costs $30, and you have to provide your own Unix server running Apache, MySQL, and PHP. If you have no idea what I just said, then Fever is not for you.

Fever and Google Reader are functionally equivalent. You read news in Fever through its Web client. Fever does set itself apart from Google Reader by sorting and compiling articles by “temperature,” a rating calculated by how many links and how much discussion the article has garnered.

Fever is particularly interesting for fans of the Reeder RSS client for the iPhone and iPod touch, since it already supports Fever in addition to Google Reader. Unfortunately, the Mac and iPad versions of Reeder don’t yet support Fever, so you have to turn to Fever’s Web app on those platforms. However, Fever does work via the site-specific browser Fluid on the Mac, which turns the Web interface into a Mac app, complete with a count of unread items in the Dock. For another dedicated Fever client for the iPhone and iPod touch, check out Sunstroke.

Good Vibe-rations — Google isn’t just killing Reader, it’s also shutting down iGoogle, its personalized Web portal, as of 1 November 2013. Fortunately, there’s a blast from the past that can replace both: Netvibes.

Netvibes started years ago as a personalized Web portal, like iGoogle, but has since evolved into a RSS reader as well. You can switch between modes with a click. In widget mode, each of your feed folders shows up as a tab, and each feed is its own widget. This mode is awkward for reading, so most will probably prefer the reader mode, where feeds are presented in a more-traditional style. 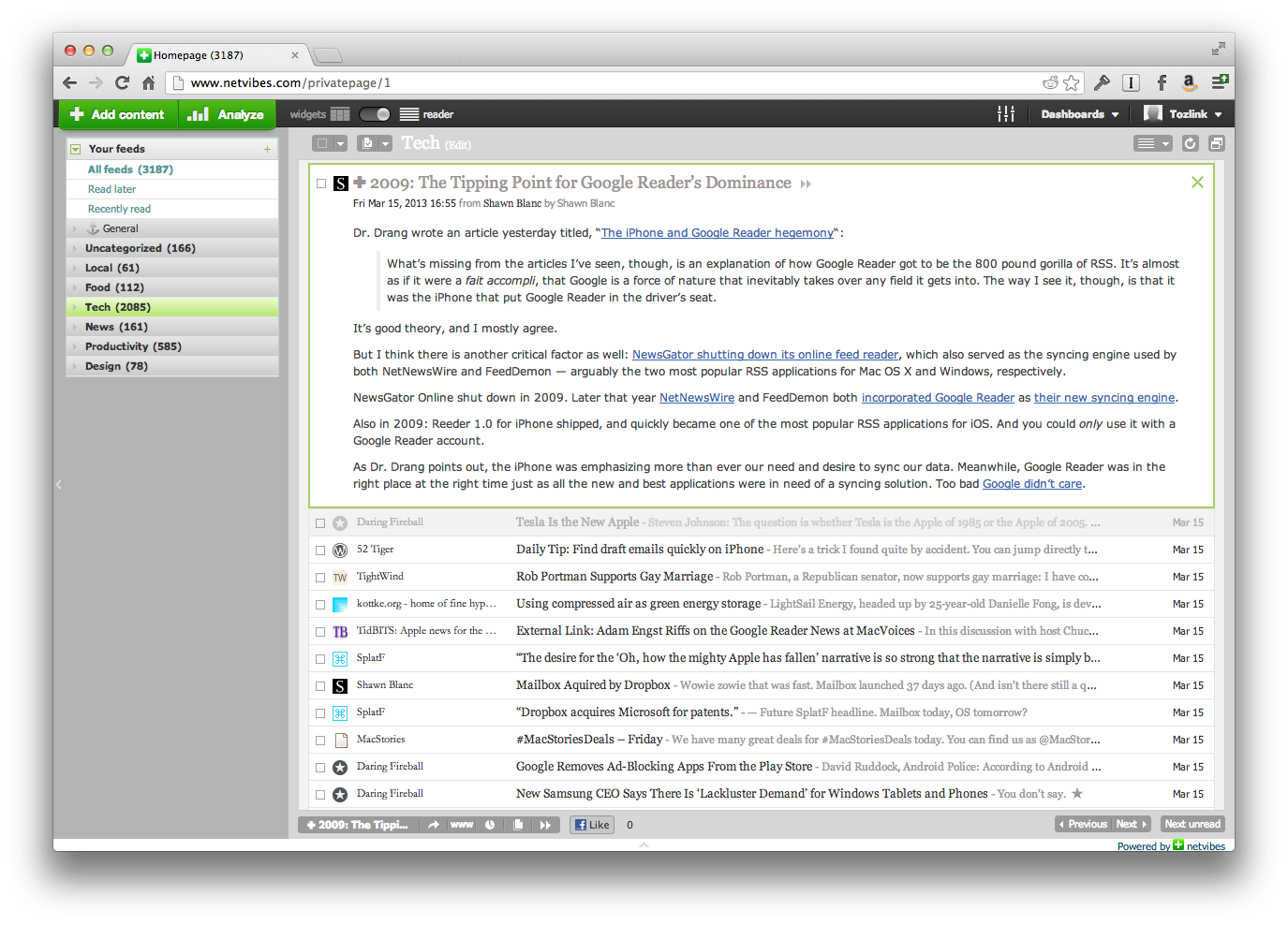 Netvibes’s extra juice comes from adding more than just RSS feeds to your interface. There are widgets for email, Google Analytics, weather, and more. There’s also a respectable mobile site, though for some reason if you save it to your iPhone’s home screen, the resulting Web app doesn’t fill the iPhone 5’s screen.

Unfortunately, Netvibes is showing its age. Its design is outdated, and it feels slow and clunky. However, if you’re hurting from losing both Google Reader and iGoogle, it’s a decent stopgap. And Netvibes lets you export your feeds, so it’s easy to move on to greener pastures later on.

RSS: I’m Not Dead Yet! — Google has given neither users nor developers much time to respond to the shuttering of Google Reader. While several alternatives already exist and more will arise, the transition will break many apps that rely on Google Reader’s synchronization capabilities when developers choose not to update their software or users fail to migrate in time.

But fear not, RSS lovers. Useful Internet technologies always evolve to meet the ever-changing environment. There’s no better proof of that than the persistence of email, which remains the primary form of communication for most professionals. Email is based on open standards, has no central authority, and can’t be controlled by a corporate behemoth, unlike social networking services Google+, Facebook, and Twitter. If the online outrage over the death of Google Reader is any indication, syndicating Web updates via RSS and Atom feeds will remain viable into the foreseeable future.

Rather than suffering from the Three Horsemen of the Techpocalypse — Fear, Uncertainty, and Doubt — RSS aficionados should rejoice. By providing a good solution for free, Google Reader has essentially monopolized aspects of the overall RSS world for many years, and its upcoming death has inspired countless developers to build alternatives that will undoubtedly look not just to replace Google Reader but also to go well beyond it.