Security Update 2013-001 for Snow Leopard and Lion — Apple has released Security Update 2013-001 for Mac OS X 10.6 Snow Leopard and 10.7 Lion, with each big cat getting two versions: Snow Leopard (316.63 MB) and Snow Leopard Server (391.63 MB); and Lion (31.42 MB) and Lion Server (79.33 MB). The updates close a variety of vulnerabilities, including Apache HTTP authentication, handling of JSON data by Ruby on Rails in Podcast Producer Server, and a buffer overflow when viewing
MP4 files in QuickTime. The complete list of fixes can be found on this Apple support page, which combines the details for these security updates with those for the just-released Mountain Lion update (see “OS X 10.8.3 Mountain Lion Fixes Nagging Bugs,” 14 March 2013). The security update also runs a malware removal tool that will notify you only if anything is removed. It’s interesting to see Apple releasing this update for 10.6 Snow Leopard, since Apple generally maintains security updates only one version behind the current cat. (Free)

Read/post comments about Security Update 2013-001 for Snow Leopard and Lion.

MacBook Pro Retina SMC Update 1.1 — Apple has issued MacBook Pro Retina SMC Update v1.1, which provides a fix for a “rare issue” for slow frame rates while playing graphics-intensive games on the 15-inch model of the MacBook Pro with Retina display. The System Management Controller update also provides bug fixes for Power Nap and wake from sleep, as well as a fix for a fan control issue. While the latter isn’t detailed in the release notes, it most likely addresses the overzealous fan spinning that’s been discussed at great length on Apple’s support
forums and noted at Geek.com. After installing, the SMC will be updated to version 2.3f35. (Free, 504 KB)

Pear Note 3.1 — Useful Fruit Software has released Pear Note 3.1 with full support for Retina displays on Macs. The multimedia note-taking app adds support for using images (like photos of slides in a lecture!) in the just-updated Pear Note for iOS 2.1, and it now saves documents in an updated format that can be read by the iOS app. For older Pear Note documents that include images, Useful Fruit suggests opening and re-saving them so they work properly with the iOS app. The release also fixes a bug with saving that caused slides to move back, an
issue where shared documents with special characters displayed improperly when hosted on Dropbox, and bugs associated with Spotlight results and the Quick Look generator. Finally, the Mac App Store version is now sandboxed. ($39.99 new, free update, 4.6 MB, release notes)

LaunchBar 5.4.2 — Objective Development has released LaunchBar 5.4.2 with improvements in indexing actions, services, and applications for the keyboard-based launcher. In addition to an overall performance boost to LaunchBar’s indexing engine, the update now recognizes executable shell scripts more reliably (even if they have filename extensions), ignores iOS apps when indexing applications, and improves 1Password indexing (especially on systems with multiple installed versions of 1Password). The release also replaces the previously used generic category icons in iTunes (Albums, Genres, Playlists, etc.) with
dedicated icons, and it fixes a problem with the Play from Album option that started playing from the beginning of the album rather than the selected track. Finally, LaunchBar 5.4.2 fixes a bug with determining the originator of a copy operation when triggered with a mouse click (instead of pressing Command-C), an issue with sending a labeled email address via Instant Send, and the appearance of double quotes in conjunction with Instant Send or Clipboard History. ($35 new with a 20-percent discount for TidBITS members, free update, 2.5 MB, release notes)

Microsoft Office 2011 14.3.2 and 2008 12.3.6 — Microsoft has released Office 2011 14.3.2 and Office 2008 12.3.6, both of which address a security vulnerability that could “allow information disclosure if a user opens a specially crafted email message.” According to the security bulletin on Microsoft’s Web site, the updates ensure that both versions of Microsoft Office for Mac require user consent to download content from external sources.
Additionally, the Office 2011 14.3.2 update includes several fixes, primarily aimed at Outlook. It squashes a bug that didn’t save BCC recipients in Gmail IMAP draft messages, fixes an issue where messages were undeliverable if addressed to contacts that were created in x500 format, ensures that contractions aren’t marked as spelling errors, and fixes a problem with the Offline Address Book that wouldn’t update for some Office 365 users. The update also improves stability when using Track Changes and scrolling through a large Word document and fixes a problem with artifacts appearing during slideshow transitions in PowerPoint. (Free updates via the Office for Mac Web site or through Microsoft AutoUpdate, 113 MB/210 MB)

Dropbox 2.0 — While not a groundbreaking version jump in functionality, Dropbox 2.0 does significantly improve the interface available from its menu bar icon with an improved view of recently changed files as well as a new method for accepting shared folder invitations. Clicking the Dropbox icon in the menu bar now opens a window that displays buttons for opening the Dropbox folder and visiting the Dropbox Web site, plus a list of the three most recently changed files. When you mouse over one of the changed files, a Share button appears. However, clicking the Share button doesn’t engage an in-app sharing capability. Rather,
this action opens a Web browser to the file’s page on the Dropbox site, where you’ll need to click a Share button again to send a file’s link to an email recipient, share it on Facebook or Twitter, or copy the link to your Clipboard.

The redesigned window also includes notifications of new shared files and folders from other Dropbox users, which appear above the Recently Changed section. Mouse over an invitation to join a shared folder, and you can click the Accept button that appears to add it to your Dropbox folder (you can also click Decline). However, accepting a shared file (by clicking it in the window) again requires a visit to the Dropbox Web site, where you are given the option to download the file directly from the browser or add it to your Dropbox folder. 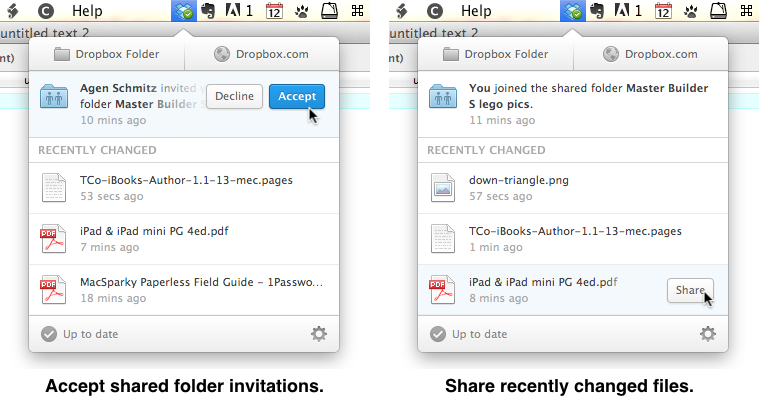 Other changes for the latest release include a fix for a bug that switched on discrete graphics for Mac laptops and added localization for Brazilian Portuguese. It’s available for Mac OS X 10.6 Snow Leopard and later. (Free update, 26.1 MB, release notes)