When we came up with the idea of doing TidBITS Presents and “Take Control Live: Working with Your iPad,” we knew we’d need some serious technology backing it up. Joe Kissell had some strong opinions about features he as a presenter would want, and we set about checking out the many different services that offer webcasting and videoconferencing options. We were rather surprised to discover that Google+ Hangouts On Air had the best combination of features, and as an added bonus, it was free to use. So we did.

But then something funny happened. As much as we had planned on using Google+ Hangouts On Air only for major events, we found ourselves using it more and more for small groups as well, including our staff meetings and even person-to-person calls that we had previously done in Skype.

What Do You Need? — There are a variety of requirements to participate in Google+ Hangouts, whether or not they’re On Air. 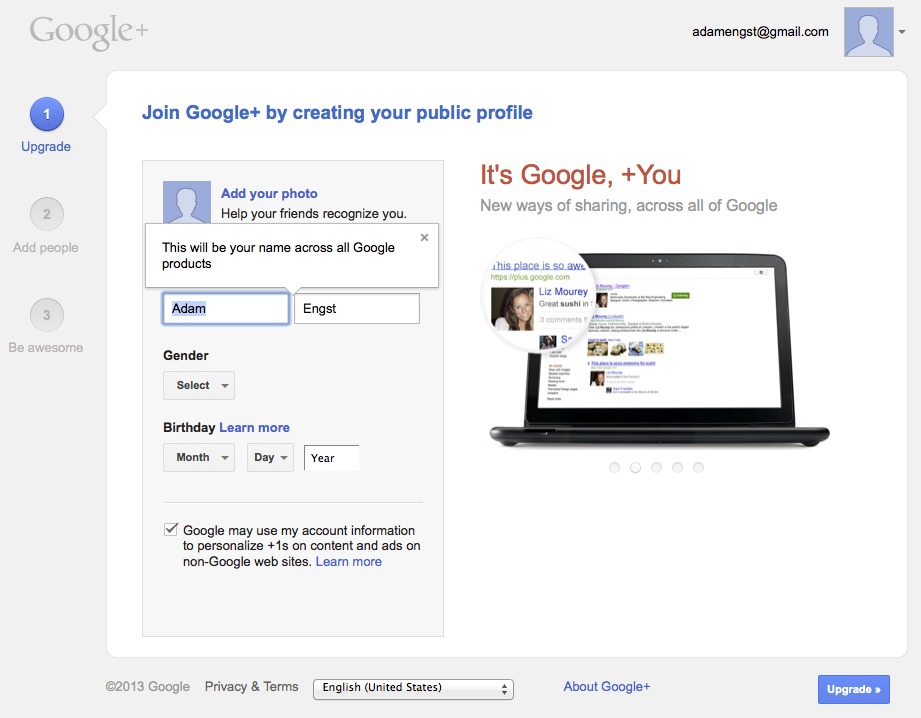 Setting Up a Hangout — One of the places we’ve found Google+ Hangouts to be a bit confusing is in the “call” phase. With Skype and Messages, for instance, you generally make sure everyone involved is running the application and is available, and then starting the call generates notifications that are nearly impossible to miss.

With Google+ Hangouts, though, since it’s mostly being used in a Web browser, notifications aren’t nearly as obvious. (This is an advantage of having the Google+ app for iOS or Android — it has notifications that alert invitees.) So there are three basic ways to set up a hangout. 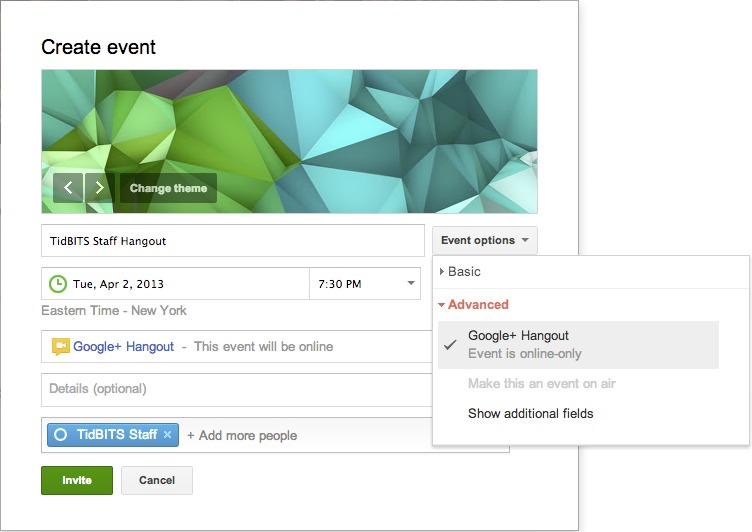 For the first two methods, here are the basic steps you as the coordinator should follow to start your hangout. 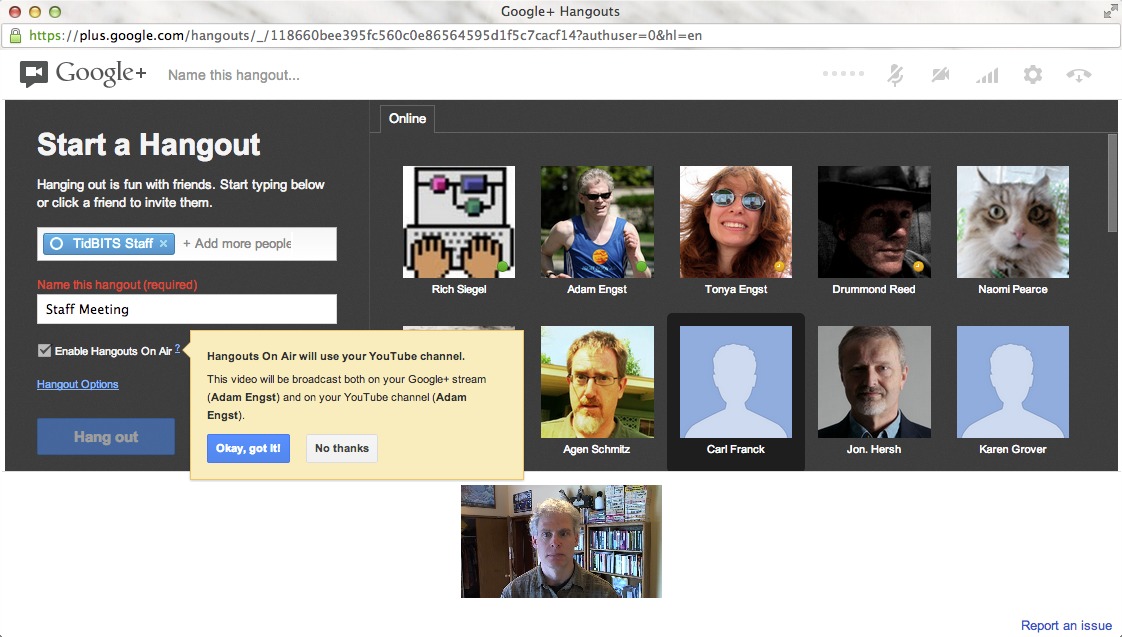 A few usage tips: If you’re doing a public Hangout On Air, you choose when to start the broadcast and recording by clicking the Start Broadcast button in the Hangouts window. Similarly, when you’re done, you click End Broadcast. Starting and stopping broadcasting doesn’t affect the people in the hangout, so you can talk before and afterwards without fear of being overheard or recorded.

For the most coherent recordings, make sure you have the desired person in the top spot (click their thumbnail in the bottom row — more on that shortly) when clicking Start Broadcast so there isn’t a confusing switch right at the start. There’s a 10-second countdown before going live, and my experience is that it’s best to make sure it’s live before starting in on the introduction.

Similarly, before clicking End Broadcast, make sure the top spot is focused on the appropriate person so other people saying goodbye don’t cause it to swap among different video feeds.

When you’re done with the hangout, click the hangup button (the phone icon) in the upper right corner. If everyone leaves a hangout, that has the same effect.

Joining a Hangout — On the other side of the equation, when you’re invited to a Google+ Hangout, the most reliable way to join in is to go to your Google+ home page and look in your notification stream for the invite. As noted before, the Google+ mobile apps will also notify you, and if you have Gmail’s Web interface open, you may also hear a sound and see a Google Talk message box appear in the corner with a Join Hangout link to click. 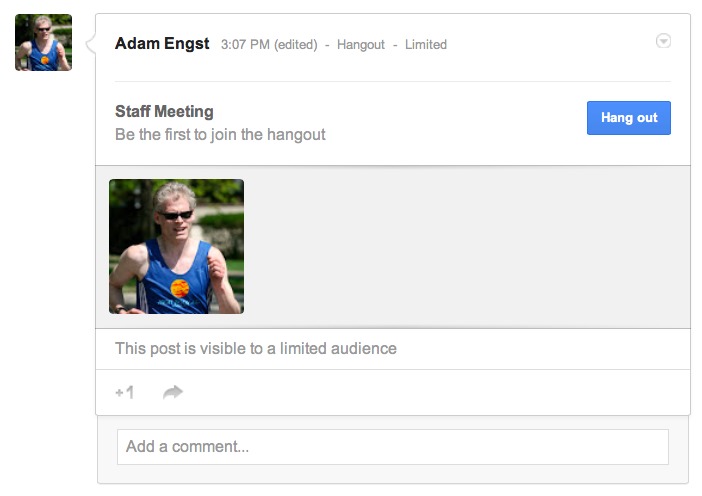 Once you click the appropriate Hang Out button or Join Hangout link, a Hangouts window opens, showing you a preview of your video image and giving you a chance to adjust audio and video settings via the gear button, before you click the Join button. (In general, the default audio and video settings are fine, unless you want to use a particular headset for audio input and output that’s not set as the system default.) 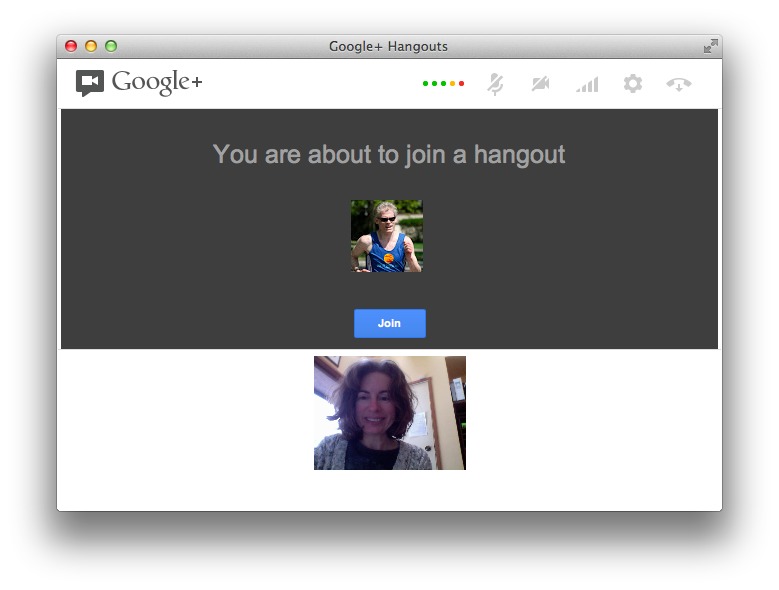 Thumbnails of each participant show up on the bottom of the window, with the large image up top showing the person who is currently talking. If you want a certain person to appear in the top spot, click that person’s thumbnail below to lock them in — a blue outline indicates which thumbnail is locked in the top spot. You can click a different person’s thumbnail to switch to them manually, or click the locked thumbnail to unlock it and let Google’s audio detection code take over again. 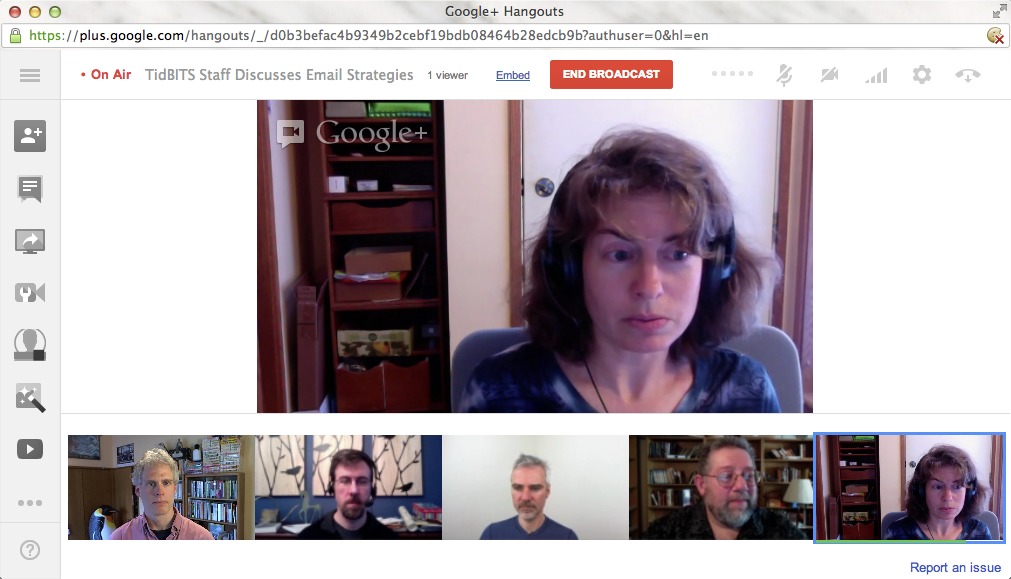 A series of buttons along the left side provides access to more functions. (Click the hamburger button at the top to toggle between icons and icons with text.) The Invite People button lets you add more people to the hangout, the Chat button opens a group text chat on the right side (handy for sharing links or for maintaining a back channel during a public Hangout On Air), the Screenshare button lets you share your entire screen or a particular window instead of your face, and the Capture button takes a picture of what’s
happening on screen and saves it to an album that’s shared with everyone invited to the hangout. (Fortunately, when someone opens Capture, everyone else is given the opportunity to turn off their cameras.)

The rest of the buttons are apps that you can add or remove — Google Effects is particularly fun, letting you play sounds to all the participants, and add headwear, eyewear, and facial hair to the video image of your head. I’ve also loaded Google Drive, which promises to provide shared note-taking and sketchpad spaces. There are other apps that you can add, but I’ve had minimal success in using them.

Two quick observations about the screen-sharing capabilities. First, they’re view-only — you can’t control someone else’s screen through a hangout. Second, you can share your entire desktop (or, in my case, either of my desktops, since I have two monitors), or any particular window that’s open. That’s key, since sharing a specific window makes for a more-focused presentation that’s easier for participants to see.

I also want to share a screen-sharing trick we’ve used very successfully with our TidBITS Presents and Take Control Live presentations. Once you’re invited to a hangout, you can join multiple times from different computers logged in with the same Google+ account with no problem. So you can join once from a computer on which you’ll share your face, and a second time from another computer that will be sharing only its screen. That way you can have both your face and a presentation showing in the hangout at all times. Of course, you must mute the microphone and the speakers on the second computer to avoid feedback, and the people watching will have to lock the presentation in the top spot in the window to be able to read it.

Once you’re in a hangout, there’s not much to do but interact with your fellow participants. A few more usage tips:

Watching a Hangout On Air Live or Later — To watch a public Hangout On Air to which you haven’t been invited, the only key is knowing its link, which the people giving the Hangout On Air can copy from within the hangout — there’s an Embed link at the top that provides both the raw URL and a snippet of code that enables the YouTube video player to be embedded in any Web page. When we do a TidBITS Presents event, for instance, we always copy that link and share it around on Twitter, Facebook, and Google+. In addition, we embed the video in a particular page that we’ve told our audience to visit at the appropriate time.

Watching one of these videos after the fact is no different than any other YouTube video, but we’ve learned some useful tricks for watching a Hangout On Air live.

Give It a Try! — I’ll be honest. It took us a couple of tries to become comfortable with Google+ Hangouts, in part because it’s not nearly as app- and call-centric as Skype or iChat/Messages. But it’s more reliable than either, and has become our go-to solution for group calls, and even some person-to-person calls. Google+ Hangouts may not be the ultimate video chat service ever, but it’s pretty darn good, and we haven’t found anything better on today’s Internet, particularly for the price.

Comments About How to Set Up and Use Google+ Hangouts