While at Macworld/iWorld this year, I stopped in at the booth of accessory maker Kanex. Last year, their featured product was the Sydnee (sid•née), a four-device iPad/iPhone charger, but I didn’t give it much thought at the time. This year, though, the image of the eight different USB devices and their tangled charging cables strewn across my desk came to mind, and I decided to see if the Sydnee would bring order to this mess. 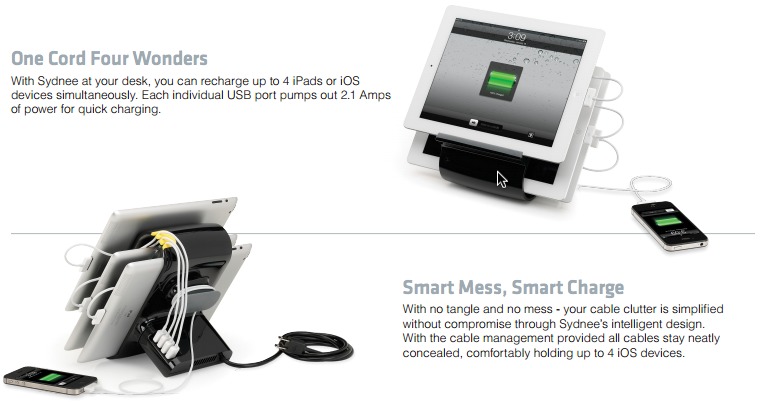 The Sydnee is a plastic stand that holds three tablets or smartphones with a power supply that powers four USB ports. The ports carry only juice; there is no way to connect the Sydnee to your computer to transfer data. That would have been more problematic in the days before iTunes Wi-Fi syncing, but today it doesn’t cause any consternation. All four ports are 2.1 amp “high power” ports, so they can charge an iPad and fast-charge an iPhone.

Setting up the Sydnee is simple; you plug it in, and then place your devices on the stand. It comes with three 16-inch (40-cm) standard USB-to-dock connector cables, which is helpful, but you’ll have to provide your own Lightning cables if you have an iPhone 5, iPad mini, or fourth-generation iPad. Similarly, if you have a Kindle or other device that can charge from USB, you’ll have to bring the appropriate cable. These cables plug into four USB ports on the back of the Sydnee. The odd mismatch between slots and cables means that one device has to sit on the desk next to the Sydnee.

Physically, the Sydnee’s front-facing shelf holds one device, and a pair of angled slots sit behind it, for sliding in two additional devices. The slots are wide enough to hold an iPad, even in most protective cases, though something like the iBallz probably won’t work. A yellow plastic cable router on the back of the Sydnee, coupled with a knob around which extra wire can be wrapped, helps keep the cables from getting tangled. Still, I recommend using short cables when possible to keep the clutter to a minimum.

I was able to use the Sydnee to reduce the clutter on my desk significantly, retiring four different USB charging bricks, and freeing up three power strip ports (after plugging in the Sydnee). My iPad and iPhone sit on the front bracket and the desk in front of the Sydnee, respectively. The two lesser-used tablets (Google’s Nexus 7 and the Samsung Galaxy 10) slide in behind the iPad. This arrangement also lets me watch video (now that it is almost baseball season) on the iPad while it is charging on the Sydnee.

The only annoyance is with the Galaxy 10. Its charging port is located on the long side of the tablet, rather than on the short end, where the Sydnee expects it to be, focused as it is on iPads. This means that getting the Galaxy 10 in and out of the slot in the Sydnee is tougher than it ought to be.

This minor nit aside, the Sydnee has been a big win. Though made entirely of plastic, it seems to be well constructed, and I have no worry about it breaking or my devices falling out. At $149, the price is a bit steep, but Amazon and other online retailers sell it for closer to $130. Nonetheless, if you have significant cable clutter resulting from needing to charge several USB devices every day, the Sydnee might be worthwhile.