If you’re like me, when reading email on an iPhone, you spend a lot of time moving between messages, which generally entails either tapping a tiny arrow or switching back and forth between a list of messages and the actual content. That’s no longer necessary in the recently released version 2.1 of the free Gmail app for iPhone or iPod touch (but not iPad), in which you can now swipe left and right to move between messages while reading.

Like many gestural interfaces, this approach is simple and sensible, but what it isn’t is obvious, until you’ve learned that it exists at all. In this particular case, all that it takes is being told, but other gestural and small-screen interfaces often need more explication.

For instance, there’s another new feature in version 2.1 of the Gmail app that is again simple and sensible, but not necessarily obvious. When you select a message in the list by tapping its checkbox, that puts you in an edit mode in which you can continue to select additional messages and then tap one of the three buttons at the top to archive or delete the selected messages, or (if you tap the down-pointing arrow) move them, label them, report them as spam, or mark them as unread. 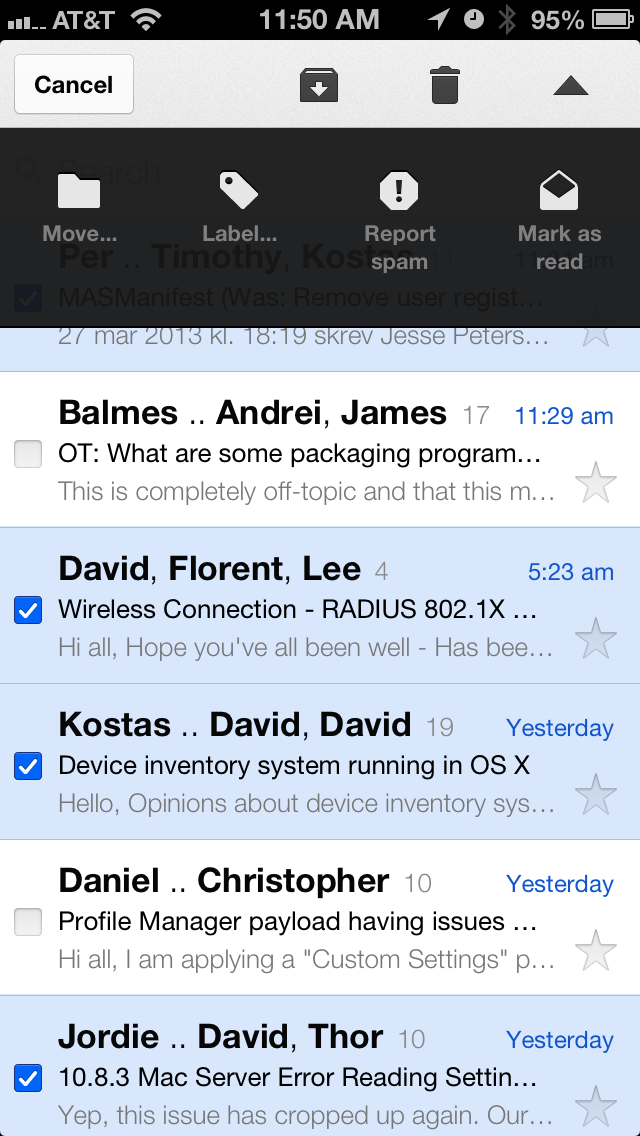 So, two points. First, gestural interfaces are good, because they can be both easy and powerful while occupying no precious screen real estate on mobile devices. Swiping between messages is a step in the right direction, but it would be nice to see more experimentation in this field, as in the Mailbox iPhone app (see “Mailbox for iPhone Eases Email Triage but Lacks Key Features,” 22 February 2013).

Second, developers need to keep user education in mind, and should build in-app hints for otherwise hidden gesture-based features, such as swiping between messages, pull to search, and swiping in lists to delete. Otherwise, we users must resort to “playing” apps like games to discover what they can do, with the price of failure being inefficient usage patterns.