For most people, typing significant amounts of text on an iOS device, particularly an iPhone or iPod touch, is difficult, slow, and error-prone, and that’s on a good day, with practice and a tailwind. Yes, Apple’s virtual keyboard is generally well-designed, and auto-correct often helps with missed keys, so if there’s no alternative, you can tap out enough text to carry on an understandable Messages or Twitter conversation, or reply tersely to an email message. But overall, typing on the iPhone is far, far harder than on a decent computer keyboard.

Of course, since iOS 4, the iPhone has allowed Bluetooth keyboards to take over for the virtual keyboard. For those people who, for instance, take notes on an iPhone in class using something like Pear Note 3.1, a separate Bluetooth keyboard is a worthwhile investment.

There’s a third group, though, that falls in between the people who can rely entirely on the virtual keyboard and those who always have a Bluetooth keyboard in their bags. These people — and I’m one of them — need to type significant amounts on the iPhone only occasionally. In my case, it’s because I’ve started using a diary-like app to record some daily events, but while I want it on the iPhone so I can access it at any time, I generally tap out only a few notes on the iPhone and fill in the details later. For people like me, Houdah Software’s Type2Phone utility is just the ticket. It has been around for a while, it turns out, but I learned of it when version 2.0 appeared in
early March 2013.

(If you’re in the market for a new keyboard anyway, Matias’s One Keyboard — available in Standard, Slim, and Tactile models — lets you switch between typing on your Mac and your iPhone with a single key press and works well. Logitech’s Easy-Switch Keyboard is similar, though I haven’t tested it. But both are a lot more expensive than the $4.99 Type2Phone. )

Simply put, once you pair the Type2Phone app with your device via Bluetooth, Type2Phone lets you use your Mac’s existing keyboard to type on your iPhone, iPad, iPod touch, or Apple TV (a second- or third-generation model, with version 5.2 of the software from January 2013), just like any normal Bluetooth keyboard, optionally showing the keys in the Type2Phone window as you press them (there’s even a silly “flying key” animation). This works regardless of what type of keyboard is attached to your Mac; I’m currently using it with my MacBook Air’s built-in keyboard and with a USB-based Das Keyboard; there’s something particularly satisfying about replacing the iPhone’s virtual keyboard with a seriously tactile keyboard. 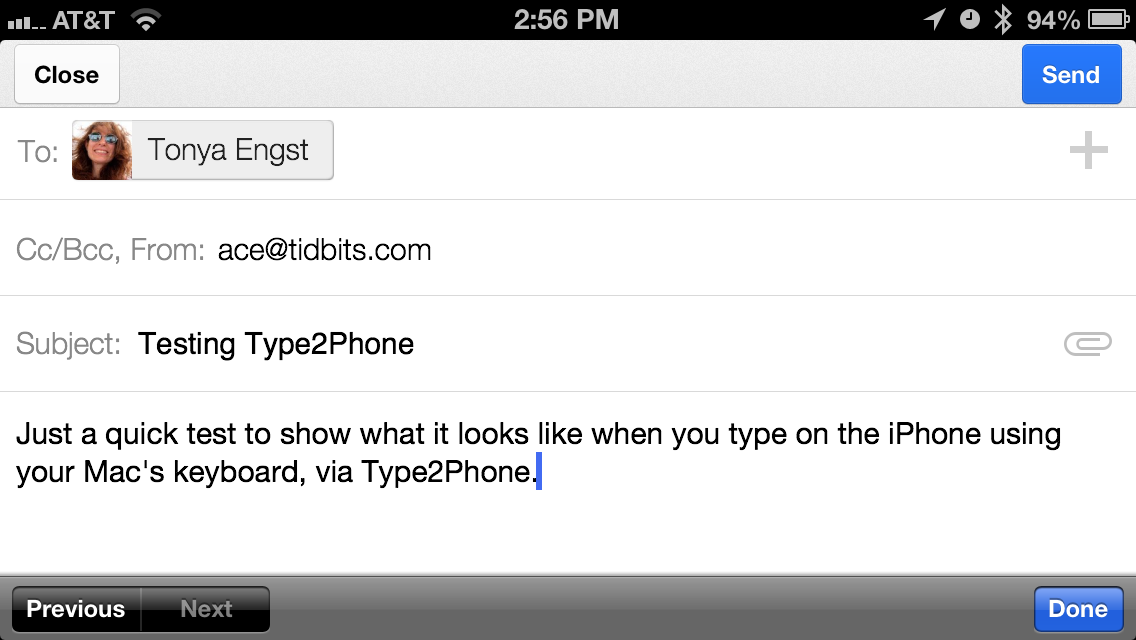 On its own, this capability is quite interesting, but Type2Phone extends it in even more interesting ways:

By default, Type2Phone disconnects from your iOS device when you send it to the background or after 5 minutes of idle time, largely to work around an iOS bug that causes later reconnection problems if you walk out of range while still connected. Both options can be turned off, but since Type2Phone reconnects automatically when you start typing in it, there’s little downside in disconnecting regularly. A pop-up menu also makes it easy to reconnect, or to switch between typing on different iOS devices if you’ve paired Type2Phone with multiple devices.

In my testing, Type2Phone has worked well, with only one problem, which is that Bluetooth can be as flaky as a fine pie crust. My iPhone pairs perfectly, with my Mac Pro running Mountain Lion asking appropriately for the passcode displayed on the iPhone screen. It also paired to my MacBook Air fine. (Type2Phone does have to be running at this point, so the Mac advertises itself as a keyboard.) But when I attempt to pair my original iPad or third-generation iPad with my Mac Pro, the Mac instead presents me with a pairing dialog that doesn’t verify the passcode from the iPad, rendering the pairing unsuccessful every time. On my MacBook Air, however, pairing works fine from both iPads.

As far as I can tell, this is all about Bluetooth and Apple’s implementation thereof; it’s unrelated to Type2Phone. Pierre Bernard tells me that the solution in every previous instance that has been reported to him is to make both devices forget each other’s Bluetooth pairings (if necessary), power them both down, bring them both back up, and try again. That hasn’t worked for me, but my iPads can’t pair with my Mac Pro in the other direction either, so there’s something else going on.

Type2Phone requires Mac OS X 10.6.6 Snow Leopard or later, and is available only from the Mac App Store, currently for $4.99. It works with the iPhone 3GS and later, all models of the iPad, and the third-generation iPod touch and later, running iOS 3.2 (only available on the original iPad) or later.

Comments About Type2Phone: Use Your Mac as a Keyboard for iOS Devices