Talk about a targeted update! Apple has released iOS 6.1.4, but it’s only for the iPhone 5 (both GSM and CDMA models). And please, forgive me for reproducing Apple’s release notes in their entirety, but I think I’d lose the nuance if I dropped even one of the five words: “Updated audio profile for speakerphone.” No, I haven’t the foggiest idea what the practical upshot of that is either, but at least it’s only 11.5 MB.

As always, you can update either on the iPhone 5 through Settings > General > Software Update, which is easiest, or through iTunes. Although I installed the update, confirmed that the speakerphone still works, and haven’t noticed any other ill effects, I can’t recommend bothering with this update unless you use the speakerphone often and aren’t happy with the audio quality. I don’t know that this new profile is any better, but Apple clearly thinks it is and is worth its own update. If you do install it, and can hear a change in the speakerphone’s audio afterwards, let us know in the comments. 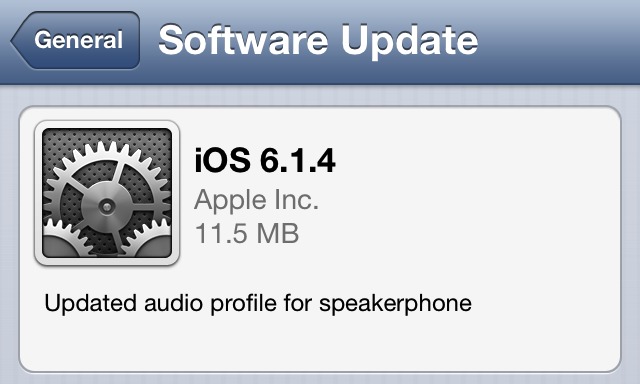