In “Adobe Flies from Creative Suite into the Creative Cloud,” 8 May 2013, Josh Centers described the stunning announcement made at the Adobe MAX conference that future versions of the sun-dried brick company’s Creative Suite products, including Photoshop, would be available only on a subscription basis. Many Photoshop users — particularly hobbyists and those who don’t live and die by the program — were outraged at the announcement and its implications (see “Creative Cloud Complaints Darken Adobe’s View of the Future,” 17 May 2013). In particular, many worried about the prospect of being locked out of all of their accumulated
Photoshop documents if their previously purchased version of Photoshop should stop working (because, say, of an update to the operating system) unless they gave in and subscribed.

As someone whose own purchased copy of Photoshop, an ancient CS1 release, had already met such a fate at the hands of Mac OS X 10.7 Lion, I understand their fear. In my own case, though, Photoshop CS1’s inability to run on my current Mac did not mean that I had to abandon my old Photoshop files. Thanks to Pixelmator, from the Pixelmator Team, I can open and edit all of my old Photoshop files just fine (or, at least, those that I’ve tried — some old sins are not worth remembering).

I’m not the only one who has turned away from Photoshop to embrace Pixelmator. It seems that the most recent update, version 2.2, achieved 500,000 downloads in its first week of availability in the Mac App Store (see “Adding Context to Big Number News,” 17 May 2013).

The answer to that, I’m afraid, may disappoint those who want cut-and-dried answers to complex questions: it depends on how you use Photoshop, and what you use it for. In my case, and in the cases of other members of the TidBITS staff whom I asked, the answer seems to be “Yes.”

As writers, of course, we scribblers at TidBITS tend not to have intense or complicated image editing needs: the most common needs recounted to me by my colleagues were for cropping and sizing images, composing screenshots, putting borders and text on images, and making minor adjustments to the colors and levels of images. Add to that my own peculiar need to manipulate the truly terrible cartoons I occasionally draw (see “iPad Tools for Bad Cartoonists (and Good Ones, Too),” 29 November 2012), and you end up with a list of use cases that make the feature set of Pixelmator, let alone Photoshop, seem like overkill on the level of a thermonuclear fly-swatter.

Pixelmator has a set of image editing and manipulation tools far in excess of our needs, with some of them similar in both operation and presentation to their Photoshop counterparts. For example, it has a Tools palette similar in many ways to the Tools panel found in Photoshop, with tools arranged in a similar order and sporting icons that won’t look unfamiliar to a Photoshop user. 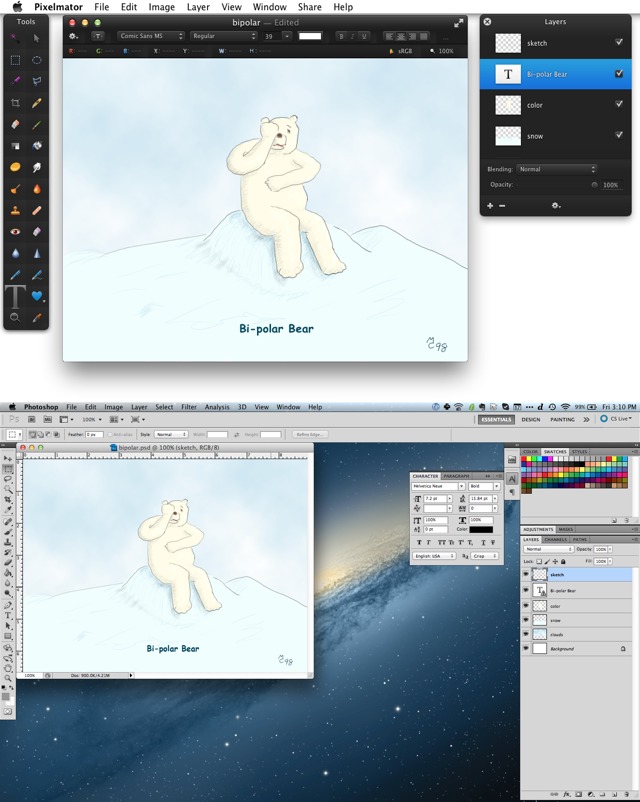 Pixelmator also has a rich array of vector shapes you can use and stylize for those times when bitmap graphics don’t fill the bill. It has a bunch of gradient fills and controls to customize and adjust them. It provides all sorts of effects — color adjustments, blurs, distortion, sharpening, tiling, styling, and more — presented in a browser that enables you to preview them. It has lots of brushes, from simple to complex, and offers the capability to modify and add to them. It has layers, of course, and
commands to link them, group them, merge them, adjust their blending with other layers, hide them, and use them as masks. It offers a Photo Browser so you can quickly peruse and choose from images in iPhoto, Aperture, Photo Booth (yes, Photo Booth!), plus any other images in your Pictures folder hierarchy. Put all of Pixelmator’s various palettes onscreen and you’d be hard-pressed to find the image you’re working on amid their vast richness of offerings. 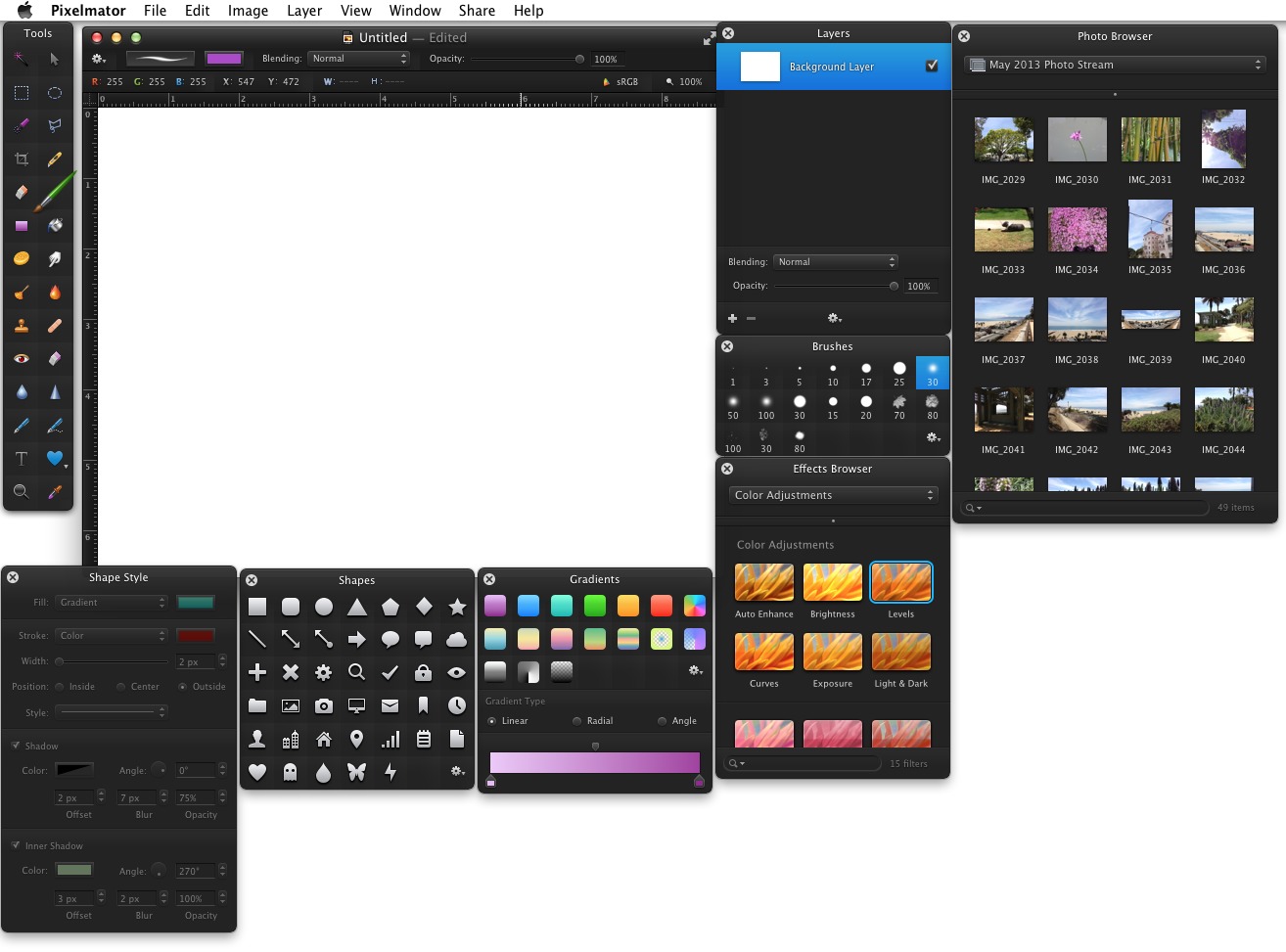 Even Pixelmator’s menus bear a passing resemblance to Photoshop’s, with commands like Transform, Stroke, and Fill on the Edit menu, and a Layers menu with some familiar layer manipulation commands. You’ll also find an Image menu with the basic image and canvas size commands and color adjustment commands. These are not one-to-one copies of Photoshop’s offerings, of course — that application has many more commands and options — but if you have come to Pixelmator from Photoshop you will, at least, have a
reasonable chance of finding the command you want if Pixelmator offers it. 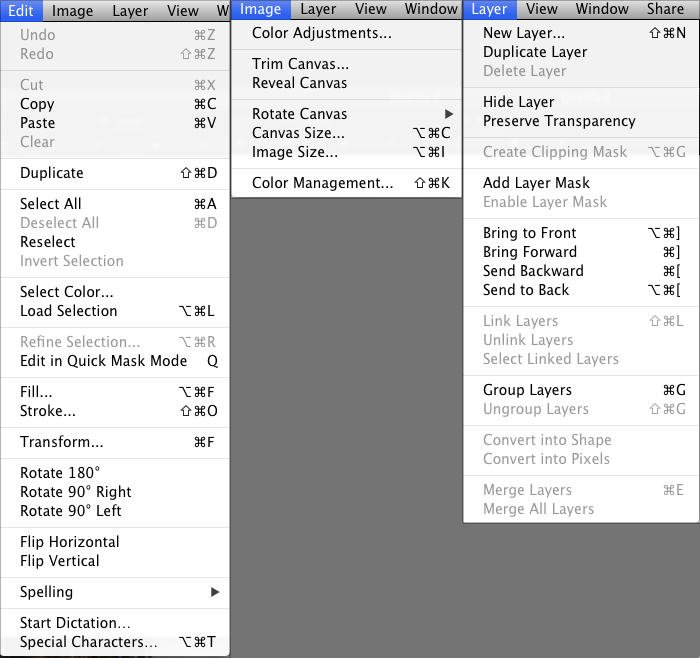 But among some of the things that Photoshop offers that you won’t find in Pixelmator are the following: layer styles, adjustment layers, saved masks, editing in the CMYK color space, non-destructive editing, and channel chops. There are many other lacunae in Pixelmator’s capabilities as compared to Photoshop’s, as well, and if you regularly need any of those capabilities, Pixelmator is obviously not the right Photoshop replacement for you.

Here’s the possibly inconvenient truth: if you are a graphics or pre-press professional, Photoshop remains the best tool for your job, and whether you like the new Creative Cloud subscription-only model or not, you will eventually need to subscribe.

But if you’re not sure, investigating Pixelmator is hardly a wallet-buster. As I write, Pixelmator is available in the Mac App Store at a special half-price “introductory” cost of $14.99. Putting it in perspective, that’s half the $29.99 cost of a single month’s subscription to just Photoshop in Creative Cloud.

When you compare the two programs, it’s clear that Pixelmator is not the best choice for fully employed illustrators and graphic designers who must interact with others in the Photoshop-driven community of creative professionals. Instead, it is well positioned to meet the needs of users who Adobe’s new strategy has largely abandoned: hobbyists, people doing occasional photo touch-ups, and students and starving artists who can’t afford the overall cost of the Creative Cloud and who don’t need all of Photoshop’s professional (and sometimes arcane) features. If you’re trying to get your head out of the cloud, the combination of Pixelmator’s low cost and rich feature set may be just what you need to brighten your day.

Comments About Can You Replace Photoshop with Pixelmator?