Released less than a month ago for the iPhone and iPod touch, the free Dots app has taken the App Store by storm, climbing the charts and destroying productivity around the world. What’s so fascinating about its success is how simple the game is, being a modern take on Connect the Dots. But developer Betaworks, who recently resurrected Digg and purchased Instapaper (see “Betaworks Takes over Instapaper,” 25 April 2013), shows its finesse with a clean design and simple interface that makes Dots irresistible.

Eventually, Everything Connects — When you first launch Dots, it wastes no time teaching you the game. You’re presented with two red dots, which you must connect by drawing a line with your finger. Next, there are four purple dots, which you must again connect. Then the game asks you to connect those four dots in a square. When you do, your iPhone buzzes with delight. 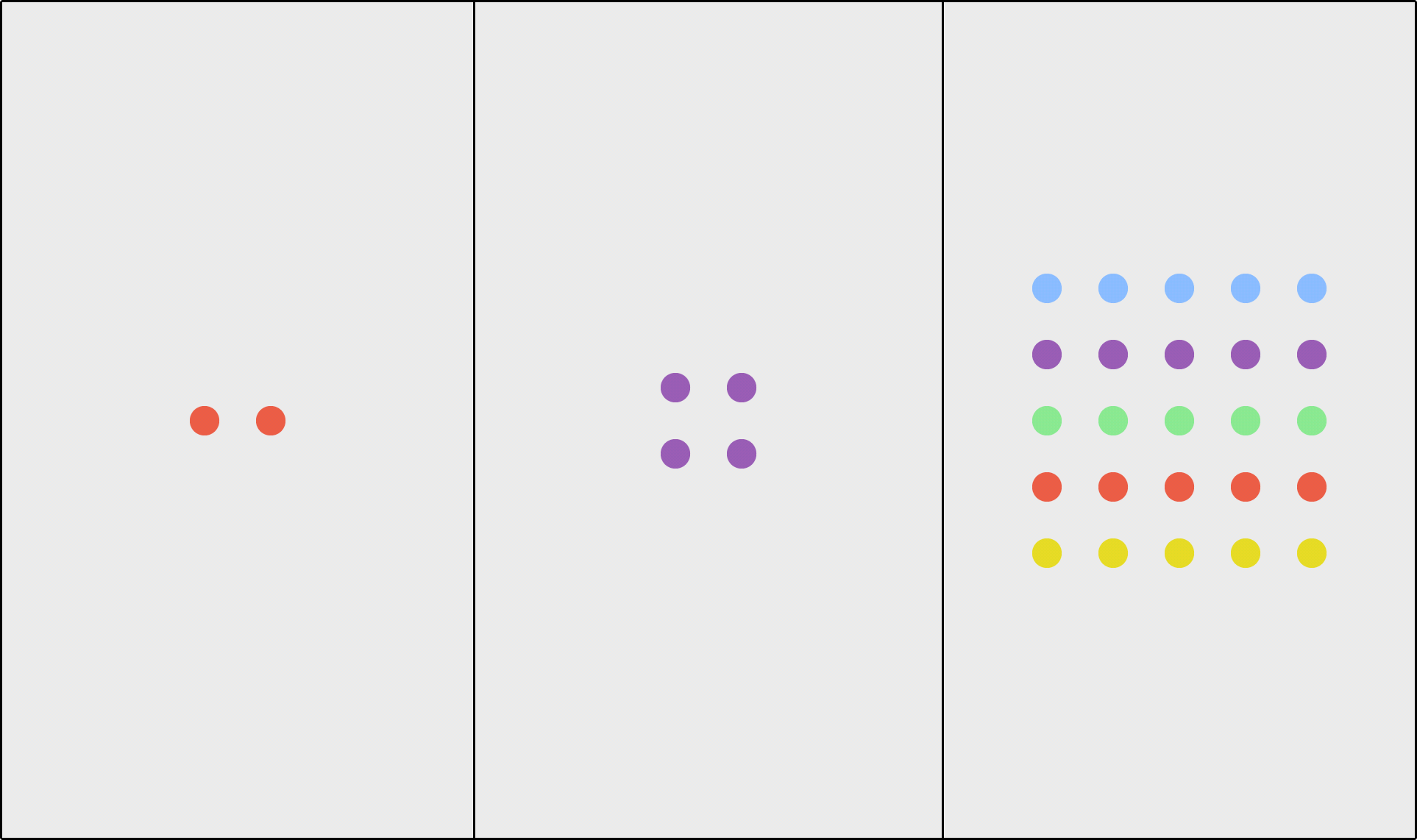 Finally, you’re shown a grid of dots, sorted in rows by color. Draw a line through each colored row to eliminate it from the board. That’s it, you’ve got the basics of Dots!

Of course, there’s more to it than that. Each game of Dots gives you 36 colored dots and 60 seconds to connect as many of the same color as possible. When dots are connected, they disappear from the board, the dots above them fall down, Tetris-style, and new dots fall into place on top. You can connect any adjoining dots of the same color that can be connected by horizontal and/or vertical lines. It’s like a minimalistic (and time-driven) version of Matt Neuburg’s LinkSame (see “FunBITS: The Deceptively Simple Games of Matt Neuburg,” 10 May 2013).

Dots are not only the chief game mechanic, they’re also the game’s currency. As you clear dots off the board, your tally of dots rises, with more dots awarded when you connect four dots in a square or connect a long series of dots. You can use these dots to purchase various boosters, like Time Stops, which pause the clock for 5 seconds, Shrinkers that remove a single dot from the board, and Expanders that remove all dots of a certain color from the board. Of course, you can purchase dots as an in-app purchase, starting at $0.99 for 5,000 dots. While in-app purchases can often ruin a game, Betaworks doesn’t push them very hard, they’re not necessary to enjoy the game, they’re reasonably priced, and they can be earned through
gameplay, though it could take a while. 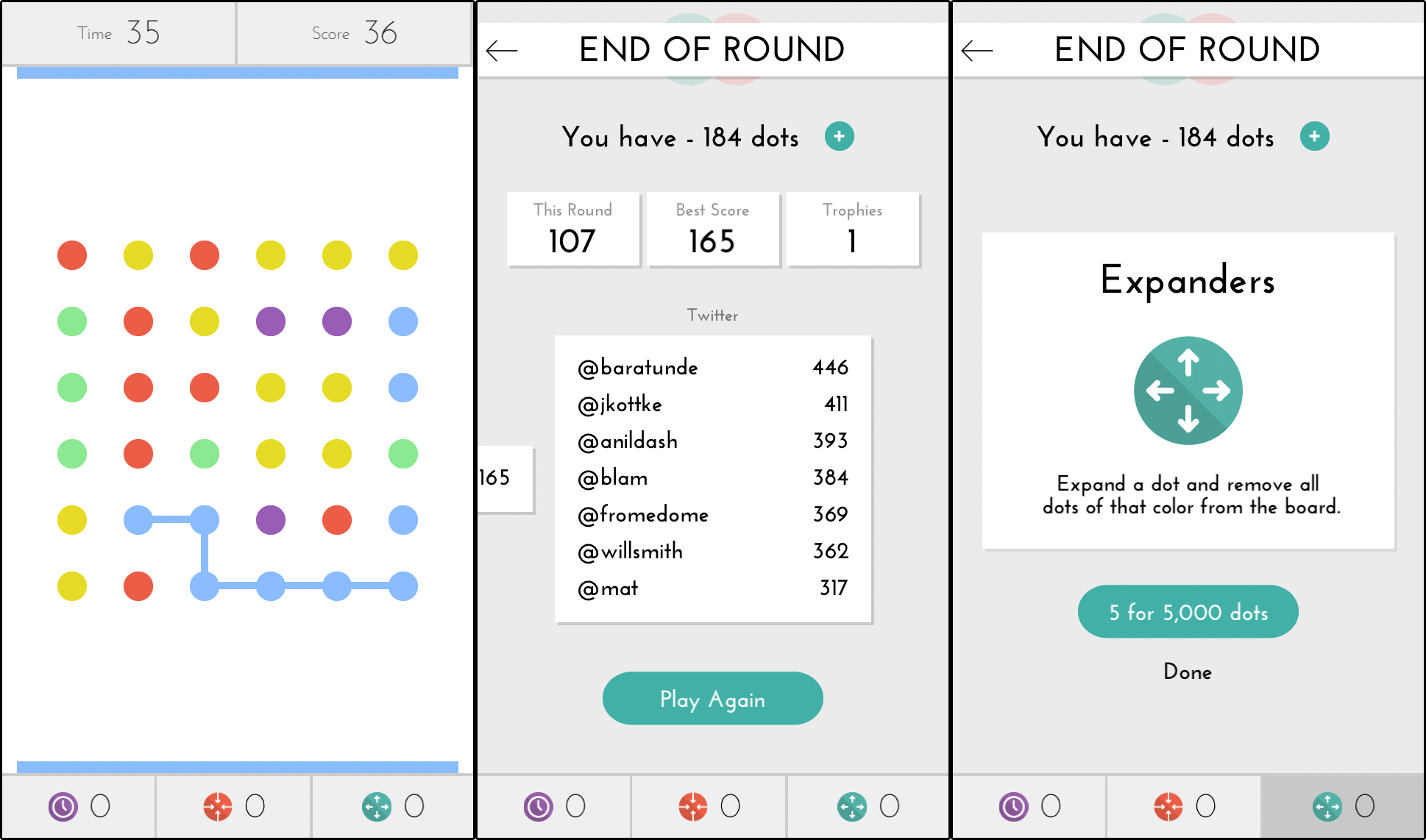 There are other rewards in the game besides currency. You also earn trophies for various achievements, and you can connect to Twitter or Facebook to see how your scores compare to your friends. While there’s no multiplayer aspect to the game, it’s fun to see the leaderboards, and Dots has yet to spam my social media feeds.

Do One Thing Well — Although Steve Jobs wasn’t much of a gamer, one could imagine that he would have appreciated Dots, which sticks to his philosophy of doing one thing and doing it well. It’s as simple as a game can get, but every aspect of the game is refined to perfection: the flat design that’s reminiscent of Letterpress (for which I wrote a strategy guide in The Magazine), the slick animations, and my favorite, the joyous crescendo that plays as you connect more dots. Simply delightful.