Since replacing my MacBook Pro’s hard drive with a solid state drive (SSD), I’ve enjoyed a wonderful increase in performance that’s given the aging laptop new life (see “SSD Optical Drive Replacement Speeds a Sluggish MacBook Pro,” 20 July 2012). The tradeoff of getting a much faster drive, though, was dealing with a smaller footprint. I downsized from a 500 GB hard drive to a 256 GB SSD as my primary drive, but kept the original drive by replacing the computer’s optical drive (which I haven’t needed since).

Having both drives has made the transition manageable; for example, as I describe in the article above, I moved my iTunes library to the 500 GB disk. But recently I ran into a snag: I wanted to enable Dropbox’s Camera Upload feature, which automatically copies photos from an iPhone, iPad, or a connected camera or memory card to the Dropbox folder. The photos are then uploaded to Dropbox’s servers, giving me an offsite backup of my images I can access from anywhere.

The problem is that my Dropbox folder is located on the SSD in my Home directory. That’s where I keep all of my active projects, taking advantage of the SSD’s speed and, again, Dropbox’s capability to store backups of my files. This arrangement is no problem when dealing with a bunch of articles, but the capacity required for storing photos can be immense — certainly enough to devour the free space on the SSD. I wanted to keep the Dropbox folder in place, but move its Camera Uploads folder to the more capacious 500 GB drive.

Dropbox isn’t cemented to the Home folder. I can specify that my Dropbox folder lives anywhere on my system by opening the Dropbox preferences, clicking the Advanced button, and choosing a new destination from the Dropbox Location pop-up menu. That applies only to the entire Dropbox folder, however. The software doesn’t allow relocating its subfolders. 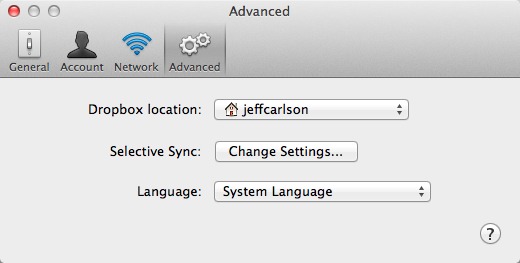 The answer to making it work lies outside Dropbox’s options. Specifically, I needed Mac OS X to trick Dropbox into thinking it was still copying files to its Camera Uploads folder, even if the folder is located on another disk. That’s possible using symbolic links (“symlinks”), which act like aliases in the Finder, but work at a deeper level in the operating system. As far as Dropbox knows, the folder is still within its hierarchy, which is key to ensuring that the images are uploaded to the Dropbox
servers.

I don’t spend much time on the command line in Mac OS X, but creating a symlink is easy. I followed instructions written by Weldon Dodd at GigaOM, who pointed me to the technique after I inquired on Twitter. Here’s how to do it:

With the symlink set up, I then connected my camera and let Dropbox copy the contents of its memory card to Camera Uploads. The image files themselves appear in the destination folder on my WinterXData volume, and copy successfully to Dropbox’s servers.

Should you ever wish to remove the symlink (such as when you get that 1 TB SSD!), just delete it as you would any other file in the Finder, after which you can move the Camera Uploads folder back into place.

Let me leave you with three thoughts. First, you can do this with any other folder in Dropbox as well, should you wish to offload Dropbox storage to a larger secondary disk.

Second, this technique doesn’t work if the destination hard drive is likely to be disconnected. In my case, both drives live in my MacBook Pro and are thus always available. But when I tested it using a different directory in my Dropbox folder and an external disk, Dropbox treated the broken symlink as if I had deleted the folder. After I ejected an external drive, the folder disappeared from my directory on the Dropbox Web site. When I re-mounted to disk, the symlink worked again but Dropbox didn’t recognize it; the folder was still gone at the Web site.

Third, this symlinking technique also works like a charm for moving any other large folder off a small SSD to a hard disk. It’s best done with folders that hold large amounts of data that’s not accessed constantly (like your Music folder), since you lose the performance benefits of storing that data on the SSD. If you’re moving one of Mac OS X’s default folders from your Home folder to another disk, you’ll need to authenticate the action with your username and password when you move the folder. And, as always, make sure you have backups before you do anything major!

(In addition to Weldon Dodd, thanks to Nik Friedman TeBockhorst and Rick Baumhauer for suggesting on Twitter that I try a symlink.)

Comments About How to Relocate a Dropbox Subfolder to Another Disk