Marvel Comics has always held a special place in my heart. One of my earliest memories is of my mother reading me a Spider-Man comic book as she put me to bed. In fact, I even remember the exact issue: Spectacular Spider-Man #145, published in December 1988, featuring the villain Boomerang.

My involvement with comics grew even more in the ’90s, with Jim Lee’s X-Men, the summer-long Spider-Man Maximum Carnage event, Todd McFarlane’s Spawn, and of course, Batman. It was a great time to be a comic nerd, with trading cards, card games, action figures, Wizard Magazine (RIP), and a seemingly endless stream of new titles and story lines.

But then, somewhere around the end of the decade, I lost interest. It wasn’t due to a sudden burst of maturity (far from it), but rather a string of ridiculous, disheartening story lines (Spider-Man’s clone from the ’70s has returned, but it was the real Spider-Man after all!) that became increasingly hard to follow. You might have to buy eight or more comics to see a story arc all the way through, like Age of Apocalypse. It became such a mess that Marvel eventually spun off the alternate Ultimate Universe in an attempt to start with a clean slate that wouldn’t overwhelm new readers.

I wasn’t alone in my waning interest. Marvel filed for bankruptcy in 1996, and in the 2000s, comic books, once a mainstay of practically every retailer in America, even supermarkets, vanished from the shelves and were relegated to book stores and comic book shops. Comic books went from being a common childhood pastime to being something only “enthusiasts” (i.e., freaks) pursued.

Even after the success of Marvel’s movies, such as Iron Man, I didn’t spot many kids reading the comic books that spawned their favorite superhero movies. The comic book seemed like a dead art form…

…until the iPad came around. All the major comic publishers smartly teamed up with the ComiXology service, which made buying and reading digital comics a joy, whether on the Web or the iPad. The free ComiXology app is great. Page loads are fast, and it even includes a Guided View feature that zips from one enlarged panel to the other, making the most out of the iPad or even iPhone screen.

But cost is still a factor. Most issues on ComiXology cost $2, with frequent $1 sales on back issues. That sounds cheap on the face of it, but when you consider that I can read an issue in 15 minutes and still be left wanting more, you’re talking an addiction that can rival cocaine or Fabergé eggs in cost! “Why, oh why,” I asked, “in this day and age of Netflix and Rdio, can’t I just subscribe to a cornucopia of comic books for a low monthly price?”

The fact is that you’ve been able to do just that for a while now. Marvel Unlimited has existed as a Web service since 2007. But Marvel made the unfortunate decision to build their service on Adobe Flash, which gave it the double whammy of a subpar desktop experience coupled with a complete lack of compatibility with iOS devices. And who wants to read comic books on a desktop or laptop computer, anyway? (You could conceivable hold a MacBook sideways to read, but you’d be taking a chance with an expensive piece of hardware.)

Marvel seemed to have finally gotten the hint in March 2013, when it released the Marvel Unlimited app for iOS. Now, you can access an enormous back library of the Marvel Universe from the comfort of your couch for only $9.99 per month or $69.00 per year! Excelsior!

But hold on before you click that subscribe button, True Believer. Unfortunately, Marvel has once again made some unfortunate choices that make Marvel Unlimited rather… limited.

For one, Marvel chose to base the app on HTML5, and while I don’t know whether HTML5 or just poor implementation is to blame, the result is a slow, clunky experience. Page turns are unresponsive, pages sometimes take ages to load, and the app just feels clumsy. To add insult to injury, while the Web app now provides an HTML5 reader, it’s available only to paying subscribers, meaning you need Flash to view samples and free issues (thanks to Jason Snell, Editorial Director of Macworld, for cluing me into that). Marvel would attract customers more successfully by putting their best face forward. Instead, potential subscribers are shown the worst of two worlds: HTML5 on mobile, Flash on the Web.

Once you’ve loaded a comic, the interface is minimal. Controls are hidden until you tap the screen, or more realistically, tap the screen multiple times before it responds, at which time the controls slowly appear. You have a tracking bar that lets you navigate an issue “quickly,” an information button to see credits for the issue, and a button that lets you change the page layout. You can choose between a one or two-page layout, or Marvel’s own implementation of Guided View, called Smart Panels. However, the Smart Panels are not nearly as clever as ComiXology’s Guided View, breaking the page up in weird, often unreadable ways. 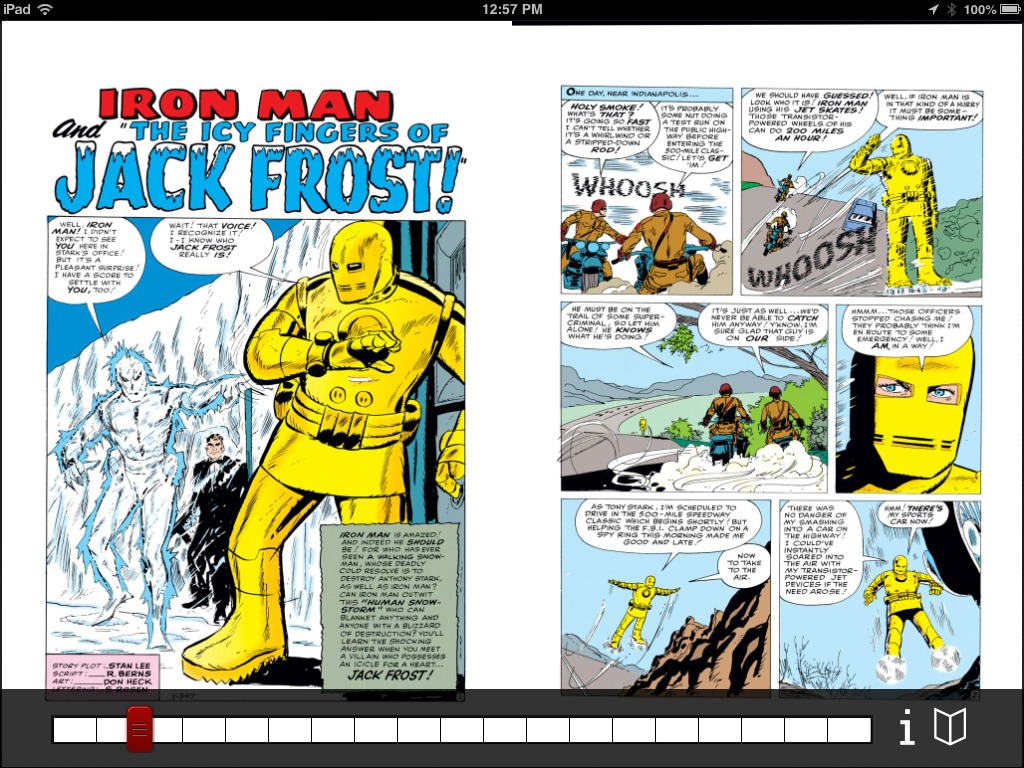 The sluggish interface is bad enough, but what’s worse is that Marvel has done a much poorer job of cropping pages than ComiXology. The result is excessive whitespace around the content, which effectively shrinks the text, making it harder to read. The difference is small, but makes a huge impact on readability. (See what I mean in the screenshot below, with Marvel Unlimited on the left, ComiXology on the right.) Admittedly, I’m reading on a non-Retina iPad 2, but that’s never slowed me down when reading in
ComiXology. Sure, you can pinch to zoom in, but the page-turning algorithm doesn’t adapt to the content width, leading to a maddeningly slow page bounce when you turn a page. 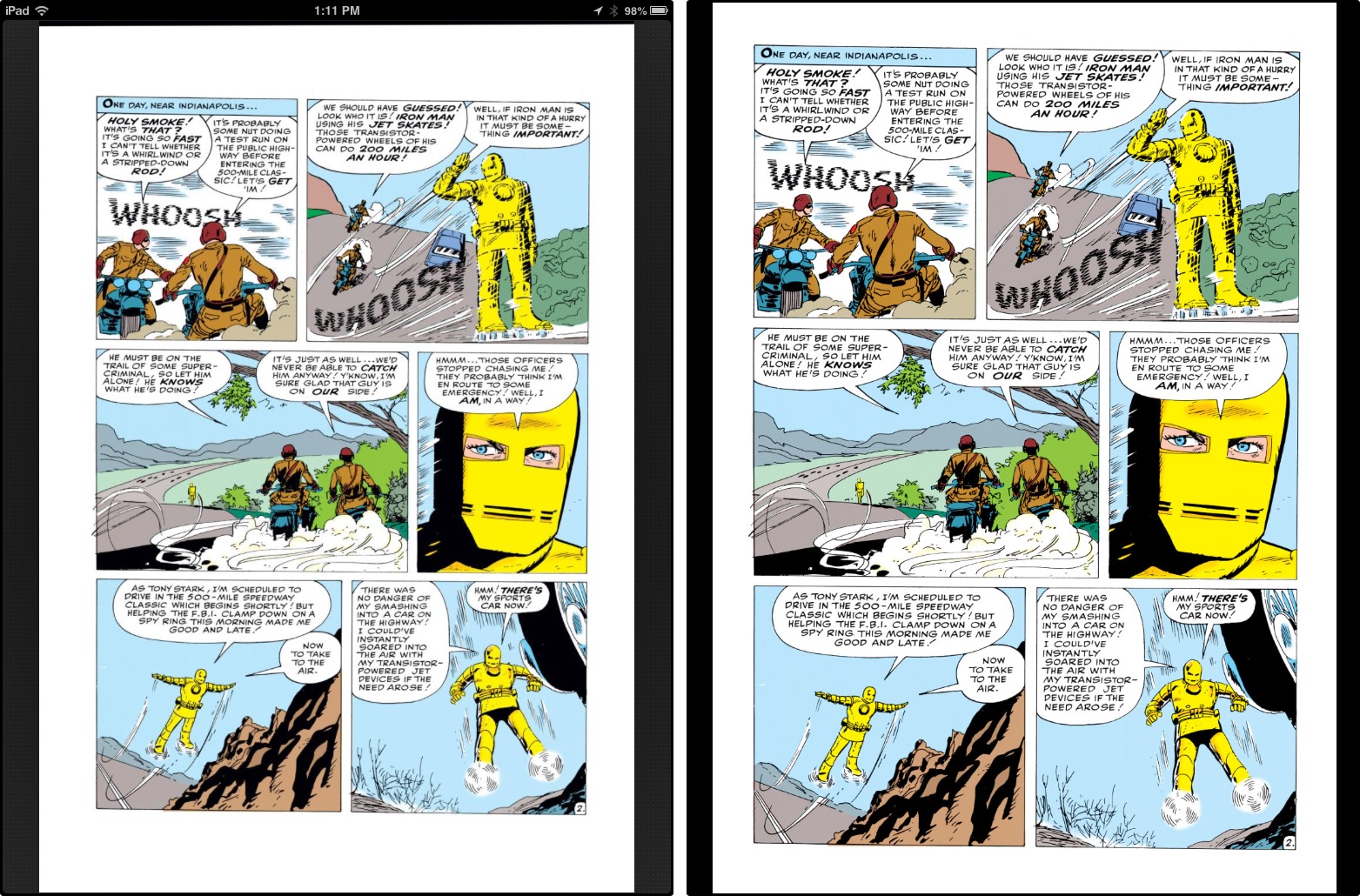 Marvel Unlimited requires a persistent Internet connection, but the app allows you to save up to six issues on your device for offline viewing. While this is nice, and something Netflix could mimic, six issues is not enough. I could blow through that many in the first hour of a long airplane trip. Needless to say, there’s no way to read the comics downloaded via the Marvel Unlimited app in any other comic-reading app.

I would love nothing more than to be able to recommend Marvel Unlimited, since $69 a year is a bargain to gain access to the Marvel back catalog, even if issues from the last six months have been withheld (I’m more interested in catching up and reading previously unexplored titles, than in staying up with the latest fictional happenings). But as the app currently exists, it’s an exercise in frustration and disappointment. I’m not alone in this view; as of this writing, the Marvel Unlimited app has a rating of only two stars in the App Store.

The entire effort seems half-hearted, and I suspect there’s a reason for that. It’s a well-known fact that subscription services bring in less revenue than a comparable number of outright sales, but Marvel has to realize that it’s now competing not only against DC and Image, but also against myriad other forms of entertainment and BitTorrent. One could easily download an entire comic collection from an aquatic-themed BitTorrent site, load it into any of the iPad’s excellent comic readers, and be reading in a matter of minutes. That’s what Marvel’s up against, and Marvel Unlimited has to improve if it doesn’t want to have sand kicked in its
face by all the other comic apps.