Some iOS app categories are a dime a dozen, like text editors, to-do lists, and camera filter apps. However, Realmac Software hasn’t been thwarted by this endless sea of competition. After reinventing the to-do list with the gesture-driven Clear, they’re attempting the same thing for photo apps with the $0.99 Analog Camera for iOS. (It’s designed for the iPhone and iPod touch, so while Analog Camera works on the iPad, it has only a scaled-up iPhone interface.)

Analog has existed as a Mac app since 2011, enabling you to create Instagram-style photos on your desktop. With Analog Camera, Realmac brings those same features to iOS, along with a gesture-driven interface, reminiscent of Clear.

While I always found Clear to be unintuitive, held back by its lack of visual clues, Analog Camera is much more obvious. The main screen consists of your Camera Roll, presented as a grid. Unlike some other iPhone camera apps, there is no separate camera roll to manage. Also, your Photo Stream is accessible with a single flick. 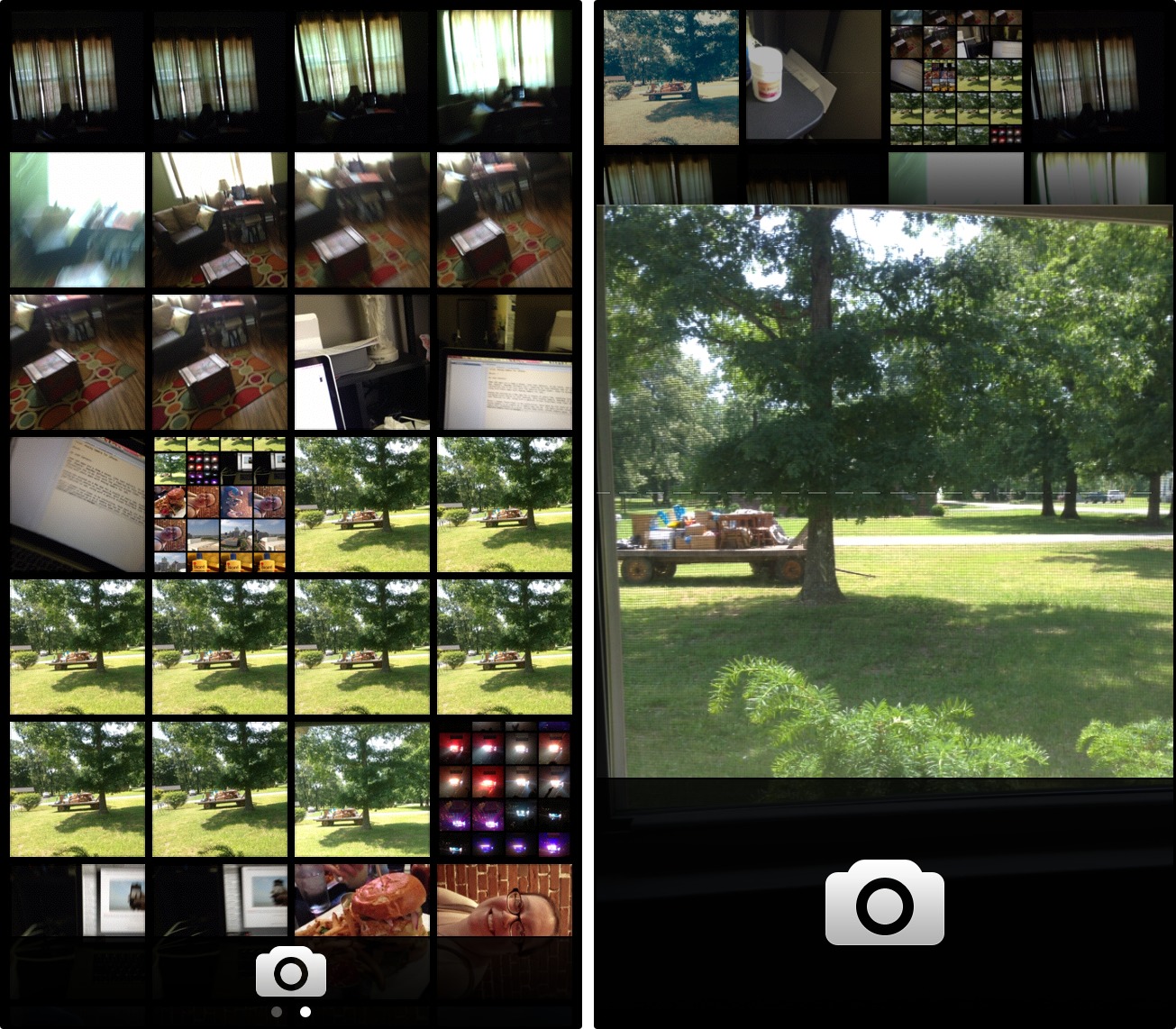 Also unlike most camera apps, including the iPhone’s built-in app, viewing and taking photos aren’t split into separate interfaces. Simply tap or slide the camera icon at the bottom of the screen to display the viewfinder, which is a cool visual trick. The viewfinder itself looks like a giant image amongst the rest of your photos (as can be seen in the right-hand screenshot above).

Once you have the viewfinder on the screen, tap the camera button to take a photo. You can take photos in rapid succession, which rewards you with a series of ascending tones that makes taking snapshots even more fun. Analog Camera enables more precise controls by tapping on the screen to change the combined focus and exposure, or tapping with two fingers to set separate exposure and focus. Double-tap the screen to return to automatic mode. When you’re done snapping photos, slide the viewfinder down to return to your camera roll.

My sole issue with this otherwise fun and delightful app is that it forces you to take square pictures. Even if you import pictures taken in other apps, it makes you crop the image into a square before applying filters. Dan Counsell, founder of Realmac Software, explained to me that they like the way square photos look, and square photos make it easier to share to services like Instagram and Path. While I understand the rationale, I would like at least the option to import pictures in other aspect ratios.

Tapping on any photo in your camera roll lets you apply filters — the core purpose of Analog Camera. So far, only eight filters are available: Camden, Superior, Marble Arch, Brunswick, Pavilion, Honeycomb, 1978, and Inky. By comparison, Instagram’s app offers 19. However, while you have to preview Instagram’s filters one at a time — a slow, tedious process — Analog Camera shows you a preview of all eight filters at once, in a grid. Simply choose the one you like and either save a copy or share it. As you tap each preview, it pops up with an animation and a swoosh sound. 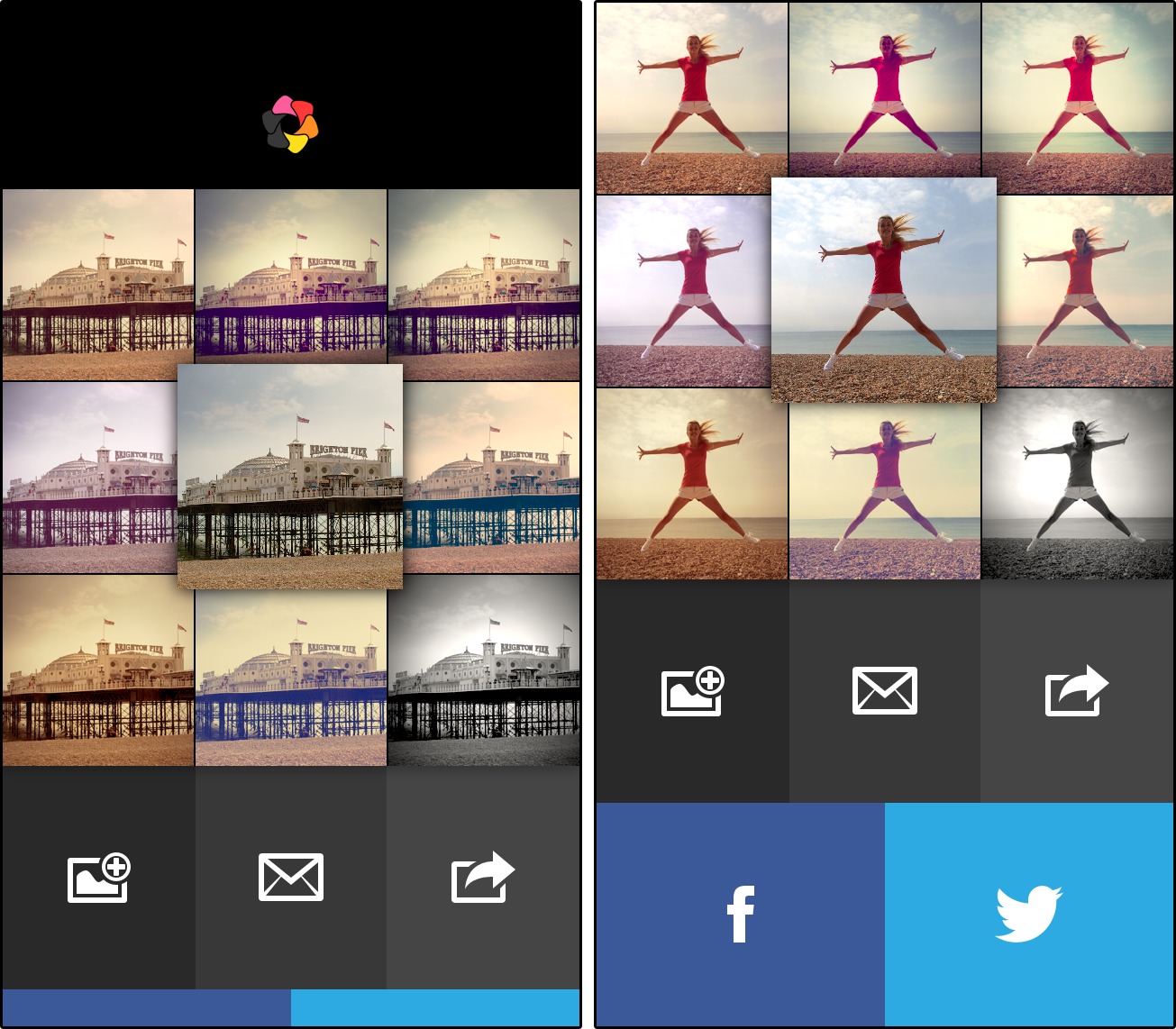 When you’re done editing your photos, you can save them to your Camera Roll, email them, or share them with Facebook, Twitter, or any other app that can accept photos, like Instagram and Evernote. There are big buttons for email, Facebook, and Twitter that are easy to tap and change depending on what you have installed. If I were much of an Instagram user, I would prefer to add photos through Analog Camera’s interface, as I’m offered a good set of filters in a much faster interface.

Serious photographers might scoff at Analog Camera, but it does a nice job with the kind of photography the iPhone does best: quick, fun snapshots. The iPhone is the Polaroid camera of our generation; everyone has one, it’s easy to carry around, and you probably shouldn’t use it for professional work, but it’s a lot of fun to use. Analog Camera is the most fun I’ve had with an iOS camera app yet, and for a buck, why not give it a try?

Comments About Putting Analog Camera in Your iPhone