The Opera Web browser is getting an overhaul for its 15th version, with a number of new features and a big change to its rendering engine. The new release switches away from Opera’s home-brewed Presto engine to Blink, the new rendering engine being developed by the open-source Chromium Project. Originally forked from WebKit (the rendering engine used by Safari), Blink will soon become the foundation for Google’s Chrome Web browser.

While it’s not wrapped with a “beta” label, this new version of the Norwegian Web browser is being offered as a “sneak preview” through the Opera Next portal (where new builds become available for testing), and it is titled Opera Next when you install it on your Mac. The full public version of Opera (version 12.15) is still available for download, and you can run both browsers concurrently for your own comparisons.

Front and center to the new features in Opera Next is a switch to a unified search/address bar that uses Google as its default search engine. Unfortunately, unlike the current full release of Opera, there’s no way to switch to another search engine. The Speed Dial start page, where you can store graphical bookmarks of your favorite sites, adds a Google search box (which seems superfluous in light of the search/address bar unification), and now enables you to place shortcuts into folders. Similar to grouping apps in iOS, just click and drag a bookmark and then drop it onto another bookmark to create a folder (or drop it on an already created folder). 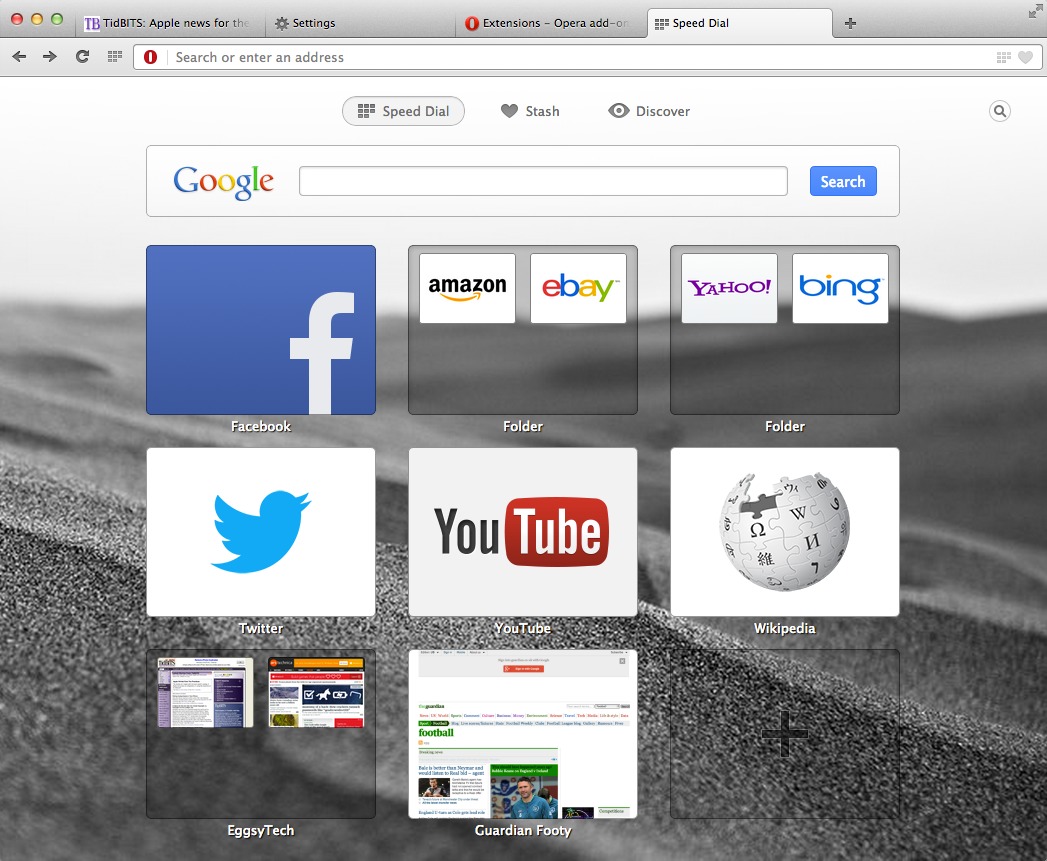 At the top of the Speed Dial page, you’ll also find icons for Stash and Discover (the latter of which was also recently added to Opera’s Android browser). Much like Safari’s Reading List, Stash enables you to save Web pages for reading later, while Discover is a news recommendation engine with a variety of subject themes that can be configured to pull stories from specific regions (and in the regional language).

Several features from Opera 12.15 didn’t make the cut to Opera Next, including notes, bookmarks (Opera Next seems to be relying solely on Speed Dial), and the internal mail client. However, Opera is now offering its M2 email client as a standalone app for Mac and Windows (available for download via this blog post from the Opera Desktop Team). Additionally, the extensions format in Opera Next has changed to the Chromium model, so extensions for Opera 11 and 12 are no longer supported. Happily, Opera Next does start out with a few available extensions, including popular ones from Evernote, Feedly, and LastPass.

If the feature changes in Opera Next seem a tad underwhelming (or even a temporary step backward), there is more of a seismic shift happening with the underpinnings of the Web browser, as Opera moves to its new rendering engine. The saga of the switch started in February 2013 when Opera announced that it would phase out its own Presto rendering engine in favor of WebKit, which at the time powered both the Safari and Google Chrome browsers (see this Ars Technica article for details). However, Google announced in April 2013 that it would replace WebKit in Chrome with a new rendering engine called Blink — forked from WebKit and born
out of the open-source Chromium Project.

Shortly after Google’s April announcement, The Next Web reported that Opera would follow Google’s move to Blink (as Opera had also pledged fealty to the Chromium Project). With the release of the Opera 15 preview, Opera Next is the first of the two browsers to include Blink in a version meant for the public at large. (Blink has been added to the developer-focused Chrome Canary pre-release browser as well as the Chrome 28 beta, and it’s
anticipated that the full version of Chrome 28 will be released by mid-June.)

Opera Next has a decidedly Chrome feel to its user interface, from the new unified search/address bar to Settings viewed in a browser tab. Under the hood, Opera Next also embraces the SPDY networking protocol (pronounced as “speedy,” and developed primarily by Google), which is used in the newly monikered Off-Road Mode (formerly called Opera Turbo) to load pages more quickly on slower Internet connections. According to this Opera Developer News blog post, choosing Off-Road Mode from the Opera menu starts sending Web pages through Opera’s servers, where image compression is combined with SPDY magic (which includes the capability to stream
multiple requests and responses over a single TCP connection) to reduce page size and speed up load times.

Opera Next (a.k.a. the preview version of Opera 15) is available as a free download, which weighs in at 43.8 MB. There’s no official word on when Opera 15 will move out of its Opera Next status.

Comments About Opera Releases Chromed Preview of Next Browser