For years, I drove nearly 100 miles to an office every weekday. Listening to podcasts was one of the things that kept me sane during the long commute, so I naturally grew picky about my podcast listening experience. A while back, what began as a review of Instacast 3 for iOS grew into an analysis of the major iOS podcatchers (see “Five Alternatives to Apple’s Podcasts App,” 22 December 2012). My winning app out of the bunch was Downcast, which is still a great podcatcher, but a change in lifestyle and a fortuitous release from Vemedio have caused me to tune back into Instacast. 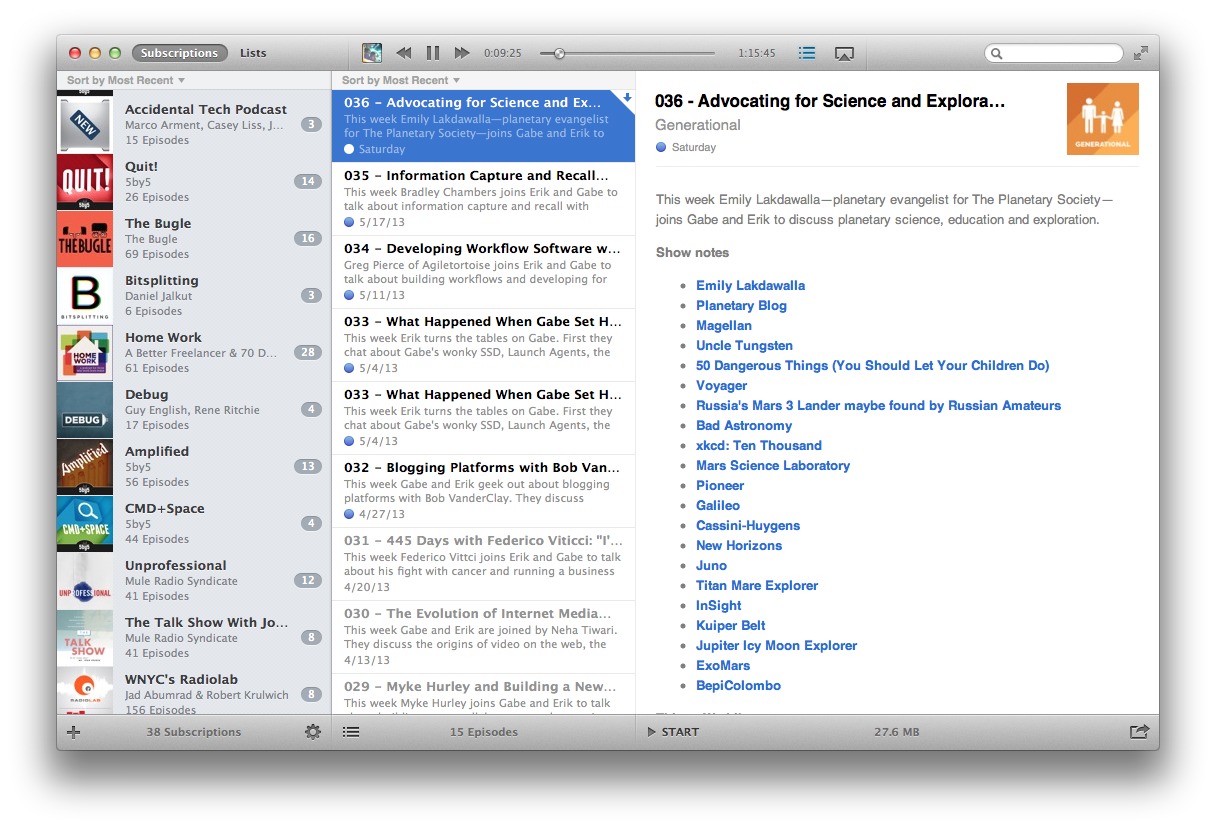 A month ago, I became managing editor of this very Internet publication (see “Please Welcome Josh Centers as Our New Managing Editor,” 6 May 2013), and my tedious commute suddenly morphed into a morning stumble from bedroom to office. While I don’t miss the exhausting drive, I was afraid of losing track of the podcasts that educated me, inspired me, and played a big role in my eventual hiring here at TidBITS. As luck would have it, the beta for Instacast for Mac was released just before I took the job, featuring full sync with the iOS clients. While the beta was free, I was so impressed that I took the option of pre-ordering it for $14.99 (the price rose to $19.99 after 31 May 2013).

So why did I pay $15 for something that iTunes can do for free, and in the process abandon an arguably better iOS podcatcher in Downcast? In short, podcast syncing. Instacast for Mac lets you start a podcast on your Mac, pause it, and then grab your iPhone and head out for a walk, picking up where you left off (or 30 seconds before you left off, if the Replay After Pause feature is enabled). Later that evening, you curl up on the couch with an iPad and keep playing. While I originally criticized Vemedio’s decision to drop iCloud in favor of its own sync solution, in retrospect, it was the right move. The sync works so well that it justifies the $25 combined price for both the Mac and iOS app (Instacast 3 for iOS runs $4.99)
for podcast fans on the go.

In terms of features, Instacast is identical to its iOS counterpart, offering a set of simple, yet competent capabilities, like a basic set of smart playlists and 30-second skip. However, it does a offer a few Mac-specific goodies. Just about every command has an associated hotkey, and it’s technically compatible with the Mac keyboard’s built-in media keys. However, to use the media keys, you must enable the Gatekeeper security feature introduced in OS X 10.8 Mountain Lion, which blocks any app that isn’t sold through the Mac App Store or digitally signed with an Apple-issued Developer ID. Even with Gatekeeper turned on, media key recognition is spotty at best. Sometimes
pressing Play would launch iTunes, sometimes Rdio would start playing. Of course, this is more Apple’s fault than Vemedio’s.

Fortunately, there are other ways to control Instacast. If you click and hold on the Instacast dock icon, menu commands enable you to play or pause a podcast, or skip forward or back 30 seconds. Also, much like iTunes 11, Instacast features a MiniPlayer that enables full control with a minimum of screen real estate. You can even set the MiniPlayer to float on top of all other windows, so it’s easy to access. Like iTunes, Instacast’s MiniPlayer features an Up Next list, which contains podcast episodes you select. 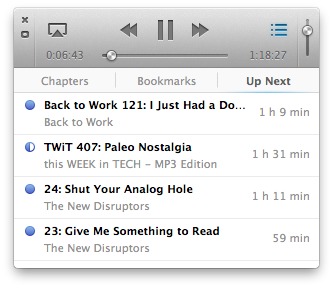 One design decision that initially left me scratching my head is the fact that Instacast for Mac, just like its iOS counterpart, insists on downloading individual podcasts, rather than streaming on demand. While this makes sense on the iPhone, where you often want to download episodes on your home Wi-Fi network to avoid cellular data caps and problems with intermittent connectivity, it made less sense to me for my Mac, which has a fast, solid Internet connection. That is, until I discovered that Instacast
for iOS automatically hooks up to Instacast for Mac and downloads episodes directly from it, saving time and bandwidth. This is a brilliant feature that many users will appreciate. Like Instacast for iOS, the Mac version lets you specify a pre-defined amount of storage for downloaded podcasts, so Instacast won’t fill your hard drive or force you to manage files manually.

Instacast for Mac is certainly a niche product. To get your money’s worth, you have to love podcasts, switch between Apple devices a lot, and own the Instacast iOS app. If you listen just on your Mac, iTunes will fit the bill, and if you listen only on iOS, Downcast offers more features and a better value (the developer of Downcast also has a Mac app in the works). However, if you fit the target market for Instacast for Mac, then it’s indispensable. Instacast for Mac costs $19.99, requires OS X 10.8 Mountain Lion, and is a 5.7 MB download.

Comments About Instacast for Mac Fills the Desktop Podcatcher Gap