Now that Apple’s Worldwide Developer Conference has receded into the past, and the tympanum-shattering chatter about the Jony Ive-led redesign of the iOS interface and its (almost) complete abandonment of skeuomorphic design has begun to devolve into an Internet screaming match over whether the colors and gradients of iOS 7’s newly redesigned icons are the cat’s pajamas or the dog’s breakfast, reasoned discussion of when skeuomorphic design is appropriate and when it is not has been lost in the cacophony.

For those late to the polysyllabic geek-jargon game, here’s one of the several definitions of “skeuomorph” that Wikipedia offers:

Common examples of skeuomorphs in Apple’s user interface designs cited by the anti-skeuomorph faction include such popular whipping boys as the leather and torn-paper look of the current Calendar app, or the green-felt-table appearance of Game Center — examples where the look of the app’s interface adds no real clues about how to use it but is simply reminiscent of real-world artifacts that have a similar function (you can’t tear a virtual page off the Calendar — I know; I’ve tried). Supporters of skeuomorphism in turn cite counter-examples of useful skeuomorphs, such as the buttons on the Calculator app (which are useful in a touch environment like an iPhone screen).

But not all skeuomorphs are graphic interface elements. I came across another, less obvious, kind of skeuomorphism a few months back while I was doing the preliminary research for an updated edition of “Take Control of iBooks Author” — footnotes. In my Web travels I’d encountered more than one discussion of Apple’s newly released iBooks Author 2.0 ebook authoring tool in which the writer had complained that even with the release of a whole new version of the program Apple had omitted automatic footnote numbering (“unconscionably” was the implied subtext).

My initial reaction was, “Yep, that seems really lame.” And, superficially, it seemed so, since most word processors worthy of the name can handle that task.

But then I thought a little more deeply about the issue, employing a trick that has often worked well for me: ask a simple question.

In this case, my simple question was “What is a footnote, anyway?” And with that question came a bunch of related questions, such as, “What is a footnote’s purpose?” and “Why do footnotes look the way that they do?” and, finally, the big one: “Do we really need traditional footnotes in interactive digital books?” By the time I had answered them, I had come to realize that employing numbered footnotes in the kinds of books that iBooks Author makes would actually be a form of skeuomorphism.

To understand how I reached that conclusion, let’s start with my first question: What is a footnote? 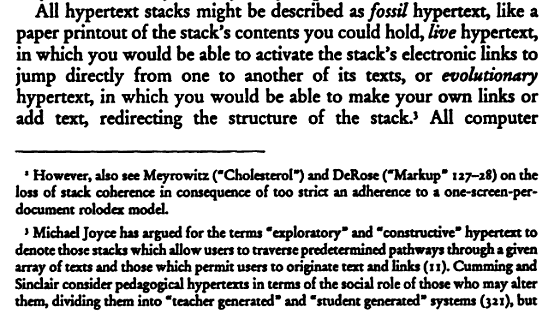 And the purpose of a footnote? Actually, it can serve several possible purposes: to explain or expand upon something in the main text, to provide a citation or a translation, or to make some sort of comment. Regardless of the footnote’s specific purpose, its general purpose is to provide additional information to a text without interrupting the flow of the main text: the footnote marker in the main text signals that additional content is available, without actually bringing the text to a screeching halt to present it. Instead of
the text running smack into a boulder of digression, the marker merely signals the existence of the digression, but lets the main text flow easily over it, like a pebble in a stream. It is the reader who, upon seeing a note marker in the main text, decides whether to interrupt the text to seek and to view that additional information, or ignore it and keep on reading.

Which brings me to my next question: Why do footnotes look the way they do?

There are two aspects to this question’s answer: the production aspect and the usability aspect.

From a practical production standpoint, it’s an easy task for a typesetter to include a superscripted symbol in a line of text when typesetting a book. And, while a typesetter might find that composing a page of type with two sections – one for the main text, flowing down from the top of the page, and one for the footnote content, flowing up from the bottom — is not without its challenges, it is still much easier to do than to replicate in metal type how annotations appeared in manuscript texts prior to typesetting, with their various margin notes and interlineations placed on a page wherever they would fit. 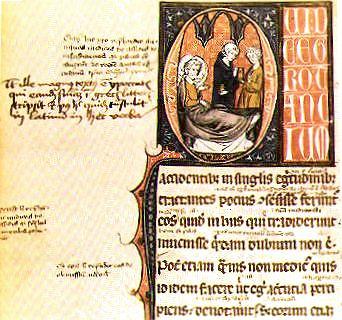 From a usability standpoint, I’ve already hinted at the answer: the markers are easy for a reader to see while not being overly distracting, and the content that they signal is easy to find. All a reader needs to do is match the marker in the text to the marker that precedes the footnote, employing just a flick of the eye.

Even in the worst-case scenario for the reader (and the best-case scenario for the typesetter), the notes can be made into endnotes instead, so the reader has to turn to another page in the book to find the note that matches the marker, but that is not a huge challenge: a finger stuck in the book, or a paper-clip, or a paper bookmark, leads the reader quickly to the note page, and, once there, another flick of the eye serves to bring the reader to the note that corresponds to the in-text marker.

But that’s in a printed book. On a screen, a whole page may not be seen at once, and a glance often won’t suffice to lead a reader from a text marker on the page to a note at the bottom. Worse, the entire concept of a page may not exist in a digital environment. Instead, a reader usually has to click the note marker to get to the note content, using the miracle of hypertext.

Again, though, clicking such a marker is not hard: mouse pointers and trackpads are accurate devices, and clicking even a small footnote marker in on-screen text is not beyond the abilities of most computer users, even if it is does require more accuracy than most mouse or trackpad gestures.

But now we come to tablets, the realm in which the Multi-Touch books created by iBooks Author are found, and things become more problematic. In that realm, the pointing device is not a precision instrument, but a blunt fingertip. And, while a tablet screen can appear quite page-like, screen size and screen resolution constrain the amount of text that can appear on a tablet screen at any one time.

Including notes on the same page as the note marker, as one may do in printed books, becomes more wasteful given the limited display area available on a tablet — and certainly not an efficient thing to do, given that tablets are computing devices, quite capable of providing a hypertext link from marker to note. It’s much better to devote the limited page space onscreen to the main text and shunt the note content to someplace else.

At the same time, replicating the print convention of a tiny superscript number within the text to signal a note’s existence, and then making that marker into a hypertext link, results in a target that’s much harder to hit accurately with a finger than with a pointing device like a mouse or trackpad.

As a result, the print conventions of footnote markers, and on-page footnotes or endnotes, become either a much less efficient use of screen real estate (in the case of footnotes) or (for hyper-linked endnotes) a frustrating hit-or-miss experience for the reader when they are translated to the tablet environment. To attempt to replicate those print conventions in iBooks Author would lead to the creation of a skeuomorph: a design element that is functionally necessary in one medium but not so necessary in another.

Note that I’m not saying that notes and their markers are unnecessary in iBooks Author books, but, rather, that the specific implementation of them as numbered notes and superscript text markers may well be.

After all, iBooks Author provides oodles of annotation capabilities: As a result, I’m much less upset by the lack of automatically numbered footnotes in iBooks Author than some critics are. Nonetheless, I would be happy to see them appear in some future revision of iBooks Author, even with all the problems they present in interactive text on a tablet. Why?

For starters, if tiny footnote markers in text act like pebbles in a stream, words that are highlighted by underlines, weight, or color are rather larger pebbles, and even a small embedded graphic marker is visually weightier than a traditional superscript footnote marker.

More importantly, though, the traditional footnote convention makes a rhetorical point: superscripted number markers and on-page notes look serious, much more so than underlined colored text or easy-to-tap Pop-over triggers. They have inherited that seriousness from the thousands upon thousands of books that have used them over the decades. This inherited gravitas is no small thing if it makes the reader have more confidence in a text because it looks scholarly.

Apple could certainly come up with a best-of-both-worlds solution to the use of traditional footnote marks in an interactive text: for example, a numbered footnote mark in a text, along with the word it follows, could be made the trigger of a Pop-over just as readily as an inline graphic. But even if Apple merely implemented the automatic creation of bottom-of-the-page numbered footnotes like other word processors do, that would still address the needs of those authors who want, for stylistic reasons, that traditional annotation apparatus in their interactive Multi-Touch books. Not everything in an interactive book needs to be interactive.

Like many other skeuomorphs, traditional footnotes in a digital text may not be the best interface solution to the problem of annotation, but that does not mean they have no worth. Stylistic messages are messages still, and they can have something worthwhile to convey. That, in itself, is worth considering in a time when many designers and critics have declared total war on skeuomorphism.

Comments About Ebooks, Footnotes, and Skeuomorphs, Oh My!