While they lack the lush sexiness of the redesigned Mac Pro, Apple introduced new models of the MacBook Air and AirPort base stations at the Worldwide Developer Conference. The MacBook Air models get a significant increase in battery life, while the AirPort base stations have been overhauled with a new, taller design and a boost in Wi-Fi throughput with the addition of the 802.11ac protocol.

MacBook Air Bumps Up Battery Life, Processor Speeds — Taking an iterative approach, the refreshed 11- and 13-inch MacBook Air models offer no cosmetic changes, focusing on under-the-hood hardware refinements with the addition of 802.11ac Wi-Fi, faster fourth-generation Intel dual-core processors (from the new Intel Haswell lineup), and improved Intel HD Graphics 5000 internal graphics. However, the biggest change is the battery life for each size of the MacBook Air, with Apple claiming a 9-hour battery life for the 11-inch (8 hours of iTunes movie playback) and a full 12-hour battery life for the 13-inch (10 hours of movie
playback). Previously, the 11-inch MacBook Air topped out at 5 hours of battery life, while the 13-inch model had a theoretical max of 7 hours.

Faster Wi-Fi, Now with Beamforming — Shifting away from the squat, square look that has been its signature since 2007, the new AirPort Extreme and AirPort Time Capsule both feature a taller profile that’s akin to the Mac Pro’s design makeover, though both Wi-Fi base stations continue with the rounded square motif rather than going fully cylindrical. Each of the base stations stands 6.6 inches tall and 3.85 inches square (16.8 by 9.8 cm), which represents a 75-percent reduction in footprint for the Time Capsule and a 64-percent reduction for the AirPort
Extreme. (Comparatively, the Mac Pro stands 9.9 inches tall and 6.6 inches in diameter.) The ports remain the same as previous models — one WAN, three Gigabit Ethernet, one USB 2.0, and a power supply connection. 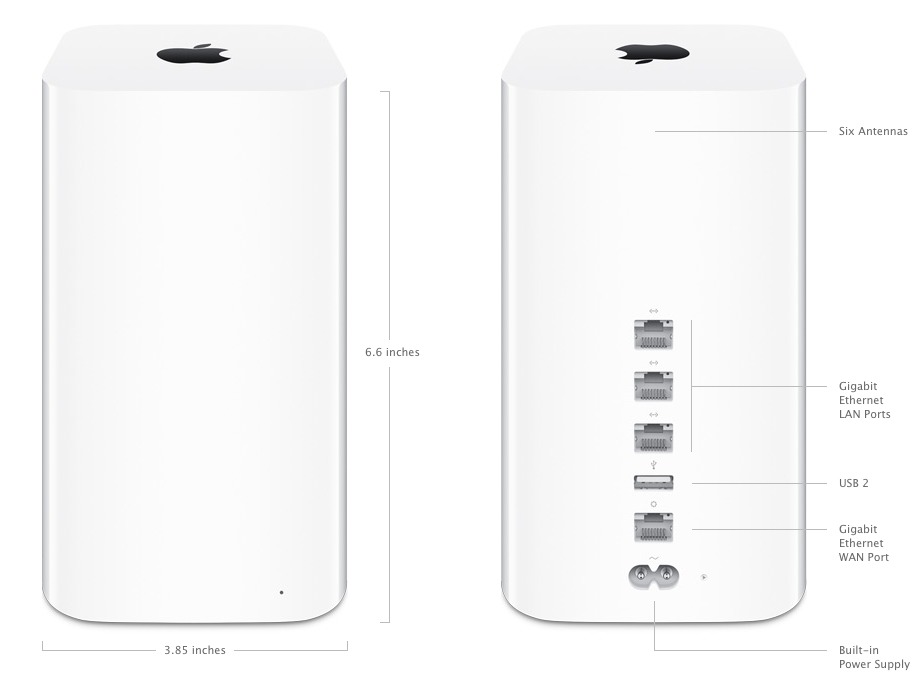 But the biggest change for Apple’s AirPort line is the addition of the 802.11ac Wi-Fi networking protocol, which makes use of three streams of data to provide claimed maximum bandwidth speeds of 1.3 Gbps to 802.11ac-enabled devices (triple that of the 450 Mbps data rate for 802.11n). Each of the base stations has three 2.4 GHz antennas and three 5 GHz antennas, all placed at the top of the devices for improved Wi-Fi disbursement. This six-element “beamforming” antenna array can also be focused to direct its Wi-Fi
stream to an 802.11ac device on the network. Thus, rather than having your Wi-Fi signal emitting in all directions in a constant stream, the new base stations can detect those devices connecting via 802.11ac and target them with more bandwidth. Like the previous 802.11n base stations, the new AirPort models support simultaneous dual-band transmissions over the 2.4 GHz and 5 GHz bands.