At the Worldwide Developer Conference today, Apple showed off the next generation of its mobile operating system, with iOS 7, featuring a complete redesign led by Senior Vice President of Industrial Design Jony Ive.

The New Look — While the basic iOS interface remains intact — a grid of icons on the home screen and the Dock — almost every aspect of that familiar interface has changed. The icons are all new, featuring a flatter design. The primary font is now Helvetica Neue UltraLight, giving iOS an even sleeker, more metropolitan look.

Older, often-loathed skeuomorphic elements have gone by the wayside. No more stitched leather, green felt, or even signal bars, which have been replaced with dots. Likewise, the icons are now more cartoonish than photographic, being composed of simplistic line drawings.

That’s not to imply that iOS is lacking in stunning visual effects. The new Weather app includes cinematic representations of the current weather, like lightning, snow, and rain. And the home screen features a new parallax view that integrates with the iPhone’s gyroscope. As you rotate the phone, the app icons move with it, enabling you to see behind the icons, a 3D effect similar to the one used in the Nintendo 3DS. The task switcher has also been redesigned, showing not just app icons, but full app previews, not unlike the cards used in WebOS.

Behind the Scenes — Speaking of task switching, iOS 7 isn’t just a pretty new face. It features dozens of core improvements, like multitasking for all apps, which Apple says won’t be a detriment to battery life, thanks to iOS 7’s awareness of your individual usage patterns.

Notifications are also being greatly improved. You will be able to specify apps that can send notifications to your Mac, so you don’t have to keep your iPhone handy to view all of them. Not only that, but notifications are now synced between devices. No more clearing the same notifications on three different devices!

Viewing notifications in the lock screen should be easier too. They are now split into three tabs: Today, All, and Missed. The Today tab shows only the notifications you’ve received in the current day, including traffic alerts. Missed includes missed messages, phone calls, and more. Of course, the All tab shows you everything.

In what is perhaps the most awaited new addition to iOS 7, Newsstand can now be placed inside a folder! And those folders now longer have a limit of 12 apps — you can have as many apps as you like inside a folder, and you can scroll through them easily.

An exciting new security improvement is an anti-theft feature called Activation Lock. Without your Apple ID and password, Find My iPhone can’t be disabled, the device can’t be restored, and the phone cannot be reactivated, hopefully rendering it worthless on the black market. Even if a thief somehow wipes the device, Find My iPhone will still display your custom message.

Control Center — For years, users have begged for a way to access common settings quickly, and it’s here at last: Control Center. Swipe up on any screen in iOS 7, including the lock screen, to reveal controls for Wi-Fi, Bluetooth, Airplane Mode, Do Not Disturb, rotation lock, volume, and brightness. There’s even a button that lights up the camera’s LED like a flashlight now, as well as quick access to the Clock, Calculator, and Camera apps, and of course, music controls.

Control Center may be iOS 7’s best new interface feature, as it reflects what most people are going to want to access quickly. 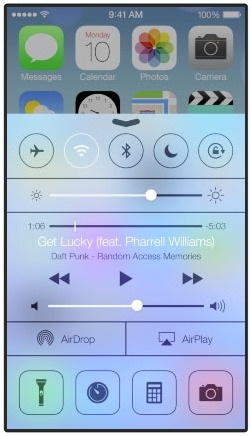 Camera — The Camera app has also been completely overhauled in iOS 7, cribbing many features from the great Analog Camera (see “Putting Analog Camera in Your iPhone,” 29 May 2013), like eight built-in filters and a live preview grid that allows you to compare them. You can even take Instagram-friendly square photos directly from within Camera now. 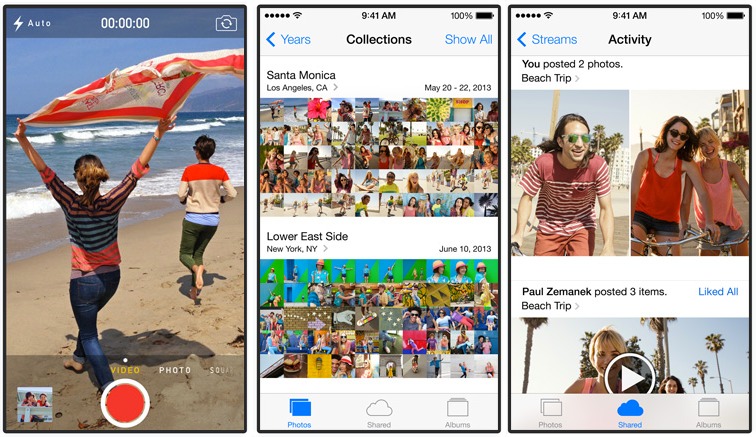 Shared Photo Streams have also been improved, allowing videos to be added, and providing a timeline of all your shared streams. Although Apple said nothing specific, we can hope that Photo Stream will support video syncing more generally as well.

Siri — One of the most welcome overhauls is Siri, Apple’s beleaguered voice control and search service. Apple has taken a cue from Google’s Voice Search, with faster voice recognition that displays on screen as you speak.

Even Siri’s voice is different. The American Siri will feature a brand-new female voice, designed to be softer and less like GLaDOS, as well as a new male voice. New voices will also be available for French and German, with other languages to follow.

Siri is more powerful than before as well. It can play voicemail, return phone calls, access Twitter, and display search results from Wikipedia and Microsoft’s Bing search engine. We presume that searching Google will remain an option, but the implication is that Siri will not display Google search results internally. Siri will also be able to access iPhone settings, like turning Bluetooth on and off. 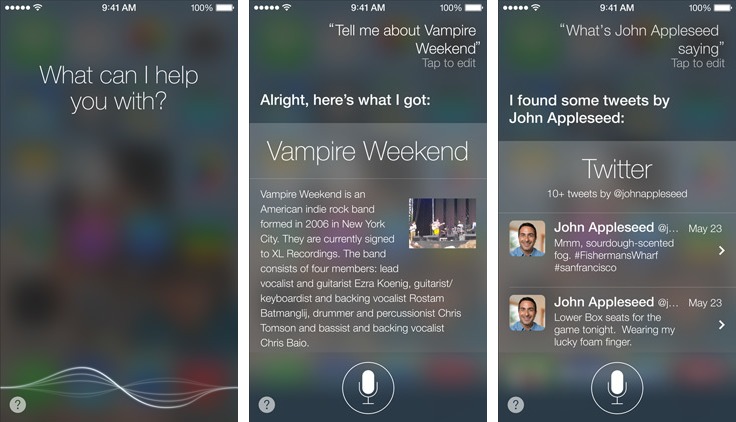 For those with long commutes, iOS in the Car promises to make Siri even more useful when it arrives sometime in 2014. While iOS has offered car integration for some time, iOS in the Car will be able to take over the in-dash display on supported car models. However, it’ll probably be some time before we see this feature in widespread use — most people hold onto their cars longer than their iPhones.

Safari — Safari has also received some redesign love. Gone is much of the app interface trimming of the current version, including the location and search fields. Apple has instead moved to a full-screen interface that hides until you swipe to reveal it. You won’t need the interface much, since you can move backward or forward in your browsing history with a thumb swipe. The search field has also been unified with the location field as well, much like Google Chrome and Safari on the Mac. 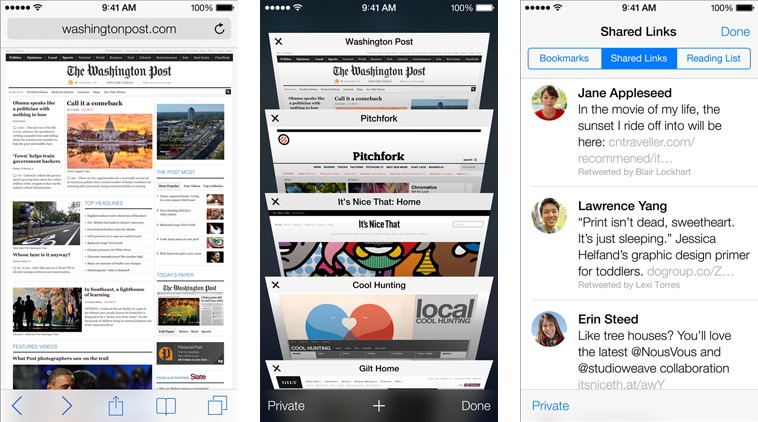 Other features are shared with the new version of Safari promised for OS X 10.9 Mavericks (see “Apple Previews OS X 10.9 Mavericks,” 10 June 2013). The limit of eight tabs is gone, with support for unlimited tabs, in a scrollable 3D view (at least on the iPhone — Apple didn’t show any of these new iOS 7 features on the iPad). Also in both versions is support for iCloud Keychain, which brings much of the feature set of 1Password to iOS and OS X, at least in Safari. And Safari in iOS mimics
the Reading List and Shared Links features in the OS X version, with a list of links shared by your Twitter and LinkedIn friends and scrolling between articles as you read.

iTunes Radio — The Music app has also been redesigned, making it look more like Rdio. But most interesting is the much-rumored iTunes Radio. Feature-wise, it looks identical to Pandora, but Apple TV owners will be pleased to know that the service will be built in. It will also be available in iTunes on the Mac. 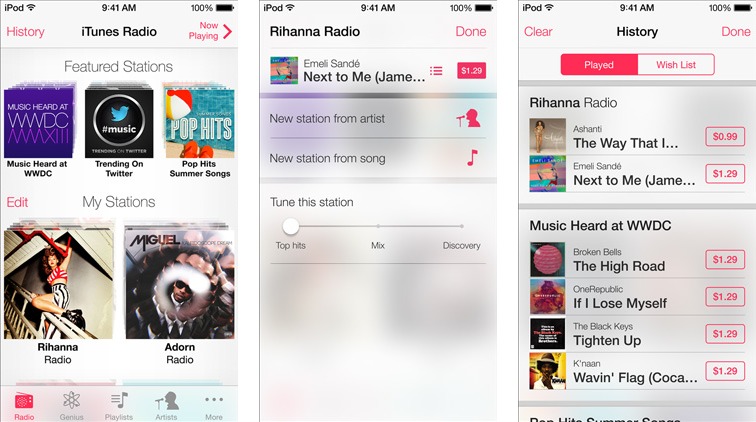 iTunes Radio is a free, add-supported service, but iTunes Match subscribers get an ad-free experience for their $24.99-per-year subscription fee.

Communications — Apple has implemented a number of miscellaneous communication improvements in iOS 7. Like the Mailbox app (see “Mailbox for iPhone Eases Email Triage but Lacks Key Features,” 22 February 2013), messages in Mail and Messages can be acted upon with swipes. FaceTime now allows pure audio calls, a boon to those who don’t wish to do everything via video and turning the iPod into something more closely resembling a cell phone. And in a welcome addition, you can now block incoming unwanted phone, FaceTime, and Messages connections.

AirDrop, which first debuted in Mac OS X 10.7 Lion, finally makes its iOS debut. AirDrop lets you make encrypted file transfers of photos, videos, contacts, and more with other nearby iOS 7 and, presumably, Mac users. While it never saw much use on the Mac, it’s far more compelling in iOS. 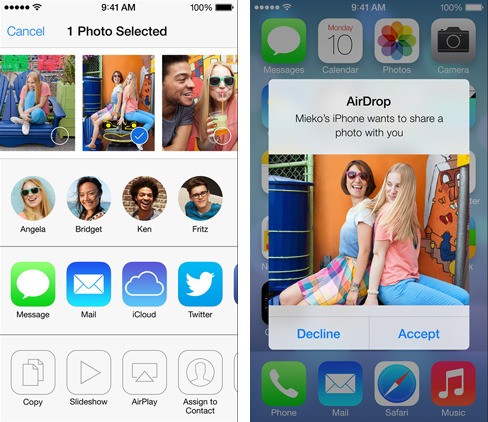 Notably missing in iOS 7 are improvements to inter-app communication and sharing, such as Windows Phone’s Contracts or Android’s Intents. If, after all of this rework, we still have to share data between apps with clunky URL schemes and copy-and-paste, we’ll be frustrated.

When Can I Get It? — You’re no doubt excited by all these changes coming to iOS. Developers can access a preview build now, though we wouldn’t advise installing it on your main device. The final version of iOS 7 is due sometime in the fall, likely at the same time as OS X 10.9 Mavericks, since so many of the apps sync back and forth between the operating systems.