The App Store has been around for 5 years, and while some frequently requested changes remain on the wishlist, like coupon-based discounts and allowing developers to respond directly to reviews of their apps, Apple has at long last responded to one significant request: the desire to transfer apps between developers. This is important because developers have a lot of intellectual property value wrapped up in apps, in part due to the app’s metadata in the App Store. Until now, it wasn’t possible to transfer an app between developers without losing rankings and reviews and severing the connection with existing customers for updates, thus stripping an app of much of its hard-earned value.

In email to developers, Apple said:

Apps can now be transferred from one developer to another within iTunes Connect, for example after an acquisition or when a distribution deal expires. Transferring the ownership of an app does not affect the app’s availability on the App Store. All ratings and reviews will be transferred and your customers will continue to have access to all available app updates.

This move is extremely positive, since it will allow developers to sell apps they don’t wish to continue developing or to set up distribution deals in order to hand off marketing efforts — in essence, it turns Apple’s App Store ecosystem into something that begins to resemble a free market. 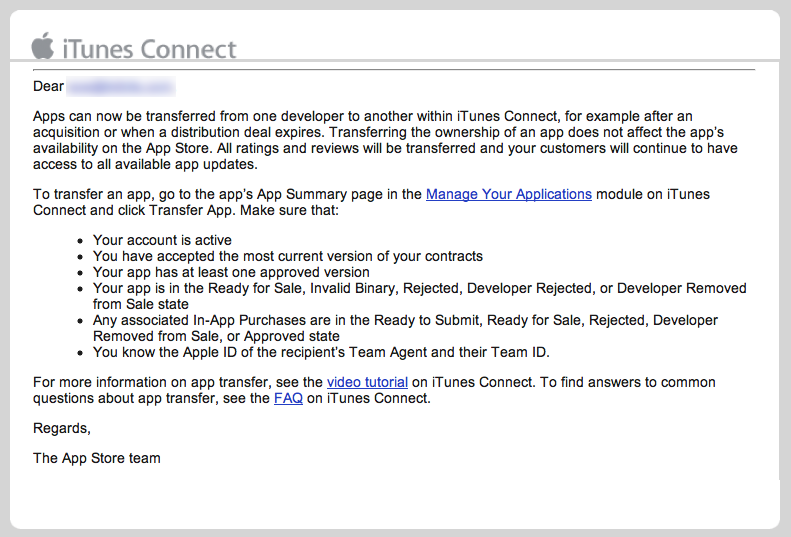 (For what it’s worth, Google Play developers can now reply to user reviews. Here’s hoping Apple sees the benefit to both users and developers of such a policy and follows suit.)

Comments About Apple Allows Apps to Be Transferred between Developers