We recently published the second edition of Joe Kissell’s “Take Control of Backing Up Your Mac.” It’s one of Joe’s best books, and across all versions and editions is our best-selling title of all time. But I’ll be honest — the last version, 2011’s “Take Control of Backing Up Your Mac,” wasn’t the same kind of success the previous books had been, despite the fact that its content was better than ever before. Nonetheless, we have high hopes for the second edition, which brings an already excellent book up to date with all the changes in backup technology over the last few years.

But I’ve been pondering what might have changed with regard to backing up, and I’d really like to hear your opinions in the comments. I see three main reasons why people might not be thinking about — or even doing! — backups as much any more: Time Machine, cloud services, and new bogeymen.

Ivan Drucker, a consultant at IvanExpert in New York City, concurred with my assessment that increased cloud usage, coupled with a bit of a “post-document world” has removed some of the urgency to back up, but he added that, in his consulting experience, Time Machine usage is hardly ubiquitous. Making it doubly concerning, he sees drives failing far more frequently than a few years ago. I can’t argue with that — in the last 18 months, I’ve replaced three drives under their 1-year warranties, and had at least two others die outside of warranty coverage.

Needless to say, not paying attention to backups is a dangerous trend — despite Apple’s excellent work with automatic iOS backups to iCloud and Google’s cloud-focused Chrome OS, we’re still years from a mainstream computer operating system that will automatically and reliably back up all local data. (Of course, if the NSA is keeping copies of all our files, perhaps they could let us restore too!)

The good news is that, unlike even Joe’s password management advice in “Take Control of Your Passwords,” a good backup strategy requires no extra effort once set up. Following Joe’s advice, I have Time Machine creating versioned backups, SuperDuper making bootable duplicates nightly, and CrashPlan backing up home folders to a hard drive at a friend’s house, and I go for weeks or months without even thinking about my backups. They just happen, and they’re there when a drive goes south, which happens more often than I’d like.

I’ve also put a lot of effort over the years into helping friends and family back up appropriately, since I know I’m on the hook for drop-everything assistance if they lose data. To that end, “Take Control of Backing Up Your Mac, Second Edition” now has one of our “Teach This Book” sections with links to a one-page handout and a PDF-based presentation that you can use to help others improve their backups.

Finally, I wanted to share our latest “Joe of Tech” comic with you. Snaggy and Nitrozac at Joy of Tech did another great job. It has been huge fun working with them — comics are a lot harder than they look! Hope you enjoy the comic and find “Take Control of Backing Up Your Mac, Second Edition” useful! 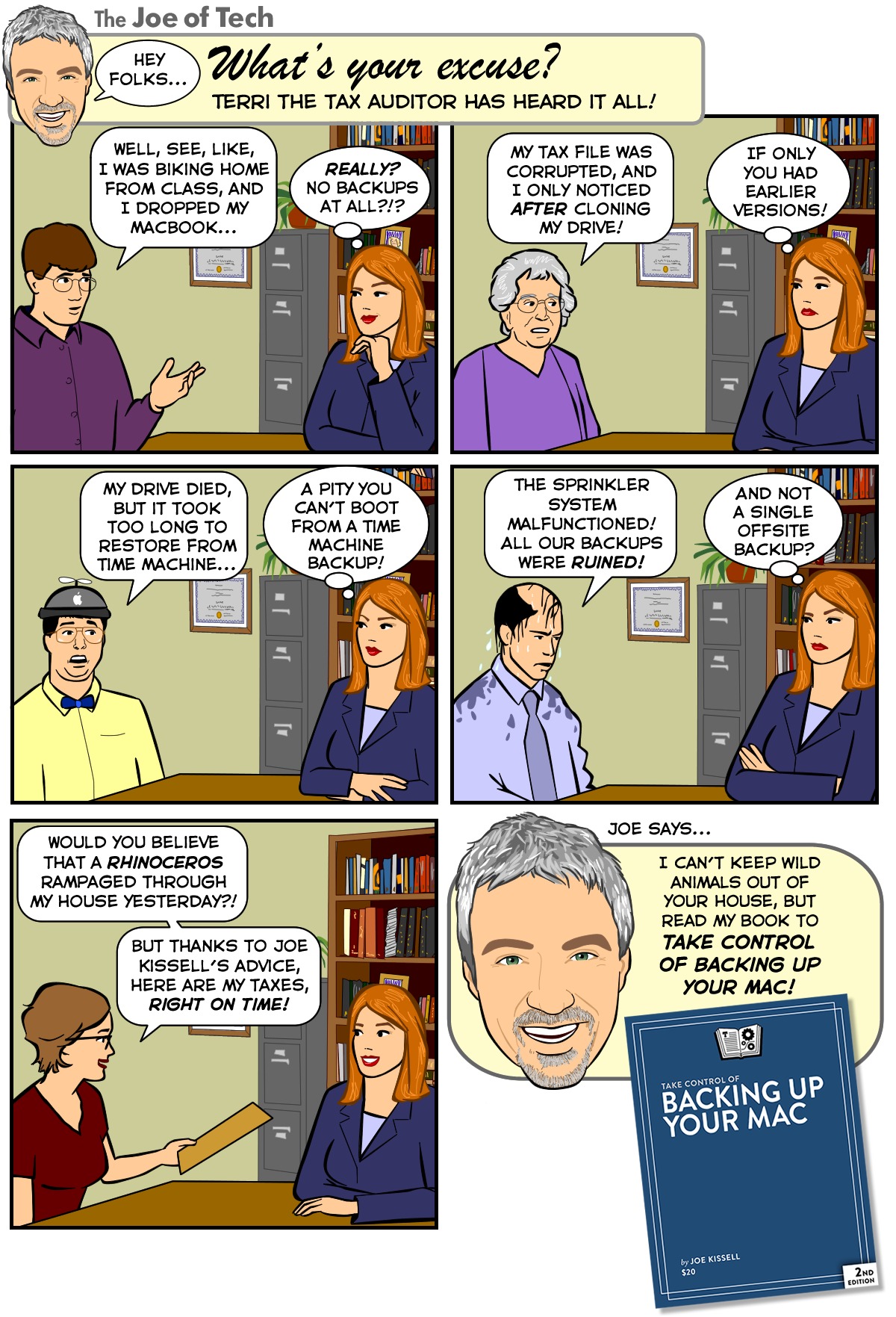 Comments About Why Do So Many People Fail to Back Up?