Apple is making a watch. That much is clear. It couldn’t be more clear unless Tim Cook were to stand shirtless on the top of the Empire State Building, shouting “The iWatch is coming!” over a bullhorn to the 1.6 million residents of Manhattan. Since that seems unlikely to happen, given Apple’s predilection for more staid media events, let’s examine the evidence.

First, Apple has been filing trademarks for the term “iWatch” in just about every country on the planet, including Mexico, Taiwan, Turkey, Colombia, Russia, and Japan. Granted, that doesn’t prove anything. Apple has all sorts of patents and trademarks that it doesn’t use. For instance, what the heck is an AirMac? And it’s not like Apple locked down the name “iPhone” ahead of time.

If I was basing this prediction solely on trademark filings and equivalent entrails, it would just be wild speculation, but how about Apple hiring Saint Laurent CEO Paul Deneve as a vice president for “special projects”? If you’re unfamiliar with Saint Laurent, it’s what Wikipedia describes as a “luxury fashion house,” founded by legendary fashion designer Yves Saint Laurent. If you take a gander at Deneve’s resume, the plot thickens. Before he became a fashion mogul, he was a sales and marketing guy at Apple
throughout most of the 1990s. Between his two gigs at Apple, he has been an executive at fashion houses Courreges, Nina Ricci, and Lanvin. He has worked alongside some of the most revered designers in the world, such as Alber Elbaz, and has deep connections in the fashion industry, sitting on the executive committee of the French Federation of Fashion and of Ready-to-Wear of Couturiers and Fashion Designers. He’s a jury member for the ANDAM Fashion Awards and a board member of French luxury goods association Comité Colbert — not to be confused with comedian and newscaster Stephen Colbert. When it comes to fashion and luxury goods, Deneve is the real deal, and in his spare time, he advises Silicon Valley startups. Busy guy.

Deneve is a great fit for Apple, which has long blended technology and fashion. But why hire him back now? The Mac, iPod, iPhone, and iPad are all plenty fashionable, despite no input from the fashion industry. The difference is that Deneve is familiar with selling things that you wear. And if we look at some of Tim Cook’s statements, that may be just what Apple needs.

While at D11 this year, Cook told Walt Mossberg and Kara Swisher, when asked about wearables, “The ones that do more than one thing, there’s nothing great out there I’ve seen. There’s nothing that’s going to convince a kid that’s never worn glasses or a band or a watch to wear one, or at least I haven’t seen it.” Despite that, he said wearable computing, “could be a profound area for technology,” and called it, “another key branch of the tree.” He even pointed to the Nike FuelBand he was wearing, and later said of it, “The wrist is interesting. I’m wearing this on my wrist. It’s somewhat natural.” He later added,
“The whole sensor field is going to explode.” What CEO is going to pass up an exploding field?

Parsing Cook’s statements, it’s not a stretch to see a CEO with interest in a wrist-based computer, and who’s having a hard time figuring out how to sell the thing. As Cook said, “If we had a room full of 10- to 20-year-olds and we said for everybody to stand up that has a watch on, I’m not sure anybody would stand up.” That’s a telling statement. Apple wants to sell wearables to teenagers. Also telling: when Cook downplayed Glass for its lack of mass appeal, he mentioned how people want glasses to “reflect their fashion.” That’s the key word: fashion.

Presumably, Apple was talking to Paul Deneve in late May when Tim Cook appeared at D11. We can now put the puzzle pieces together to get a sense of what he was thinking. Fashion, style, convincing teenagers to wear a watch. That’s what Deneve’s job will be, I propose, at least initially: making watches cool again, and making the iWatch the coolest of the bunch. Why else would someone leave the CEO position at a major fashion house to return to Apple as a vice president?

Still not convinced? I have another puzzle piece: iOS 7. While many people have criticized its oversized, cartoonish icons, app director Chris Harris drew up a concept of what iOS 7 might look like on a previous-generation iPod nano, which resembled a watch and even had wristbands made for it. The improvement in clarity is astounding. Consider the iWatch, and suddenly a lot of the design decisions with iOS 7 make more sense. (Thanks to @_ChrisHarris for agreeing to
let us republish his concept image.) 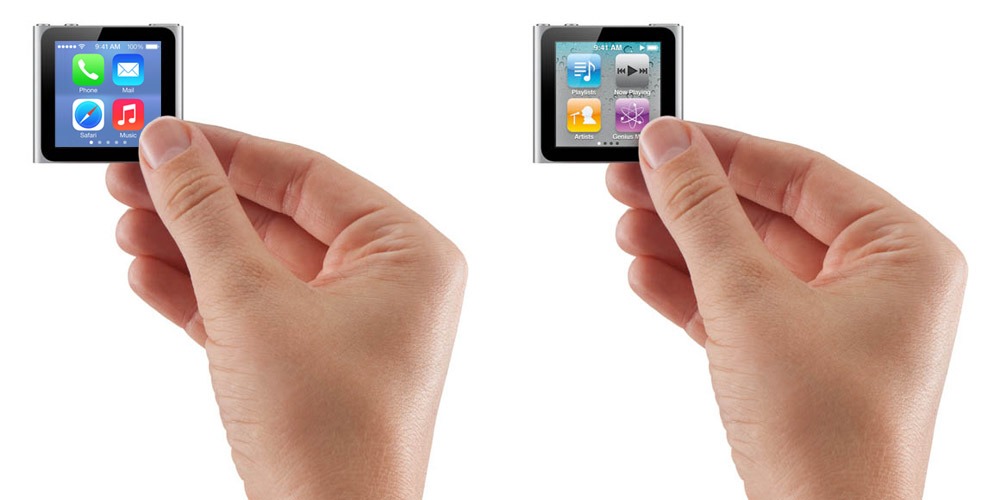 Now that I’ve made a case for the iWatch, let’s speculate on what it might do, and how it will be different from the rest of the wearable field.

Many of the iWatch’s potential functions are obvious. There’s a big market for wearable fitness trackers, and Cook’s comment about sensors would tip the hat toward the iWatch having plenty of them to measure things like pulse, movement, and sleep patterns. Of course, a fitness tracker with built-in audio playing capabilities would be a killer product for joggers.

But fitness and fashion aren’t a fabulous fit. In addition, I think we can expect a hard sell from the lifestyle angle that Apple loves so much. That means viewing family photos and possibly even videos, most likely via Photo Stream. A FaceTime camera would not be out of the realm of possibility, going one step beyond Dick Tracy’s two-way radio watch. And as Apple demonstrated at WWDC, the company is working on sending and sharing notifications between devices intelligently, so we could see the iWatch as a destination for Apple device notifications.

I doubt typing on the iWatch will be viable, but Siri has improved considerably since its debut (hey, quit laughing!), opening the possibility of voice calls, iMessage, scheduling management, maps and directions, and even purchasing movie tickets. However, I think it’s also safe to say that the iWatch will not be a standalone device — the power requirements would be too high — but rather an accessory for iPhones and iPads. Pairing over an energy-efficient Bluetooth 4.0 connection to an iOS device, or even a Mac, seems far more likely.

Speaking of power, how is one to recharge an iWatch, assuming Apple doesn’t go retro and include a winding stem? The Lightning connector is small enough to fit into a watch, and is the most obvious solution, but removing the watch to recharge it seems clunky, especially if one of the uses of the iWatch would be to monitor sleep cycles. However, it could be workable, as the current iPod nano features up to 30 hours of battery life. This is an area where Apple could blow away the competition. Self-winding watches, powered by the wearer’s movement, have existed for years, and 15-year-old Ann Makosinski has invented a flashlight powered by the heat of your hand. The flashlight uses Peltier tiles, which generate electricity when one side is heated and the other cooled. That would be hard to pull off in a watch, but a device that supplemented the iPhone without ever needing to be recharged would be a huge coup for Apple.

What about an App Store for iWatch apps? I doubt it, at least at first. Apple prefers to keep its mobile devices locked down until there’s a compelling reason to open them to third-party developers — the App Store opened a year after the iPhone debuted, and the Apple TV is still not open to all developers. However, that doesn’t mean Apple will lock developers out completely. There will undoubtedly be APIs for Mac and iOS to send and retrieve information to and from the iWatch. However, I’m willing to bet that we’ll see some kind of Nike+ app on the iWatch, as we have on the iPod nano, as that’s a partnership Apple seems to cherish.

Of course, all of this is total speculation. But as the saying goes, where there’s smoke, there’s fire, and there’s an awful lot of smoke. An iWatch fits neatly into Apple’s product range, complements existing products, and offers a new market to conquer. The more I think about the iWatch, the more excited I get. The only question remaining is: will it tell the time?

Comments About Making the Case for an iWatch