In today’s business world, collaboration is king, and because of that, we’ve found ourselves using Google Docs more, both when developing TidBITS articles with outside authors and working on Take Control marketing material. Meanwhile, in the education space, there’s an ever-increasing focus on group projects, and we’ve seen Tristan and his middle-school peers relying on Google Docs for group work. Plus, I’ve been helping start a nonprofit organization to promote STEM (science, technology, engineering, and math) in the Ithaca City School District, and to facilitate a collaborative approach to developing content and to ensure an institutional memory, I’ve gotten everyone in the group to
use Google Docs for documents, spreadsheets, Web forms, and presentations.

As a result of all this, Google Docs has become a significantly more important tool for both me and many others in the broader world. But as I spent more time in Google Docs, I became increasingly frustrated by having to use it in my Web browser. I load hundreds of Web pages every day, and because I don’t always close them immediately (I’m often referring to several at a time as I work), I can end up with 30–60 tabs open at any given time. It’s a mess, I fully acknowledge, but the practical upshot is that Web apps where I spend non-trivial amounts of time don’t mix well with everything else — it’s too easy to lose track of the tab for a particular document among all the others.

The good news is that there’s a solution: a site-specific browser, such as is provided by Fluid or via a clever hack for Google Chrome. The bad news is that, in my experience (and I’ve tried numerous times — I feel like Charlie Brown and the football), complex Web apps never work as well in these site-specific browsers as they do in a full browser.

Luckily, there’s an even better solution. Just as the Mac app Mailplane breaks Gmail out into its own app (see “Zen and the Art of Gmail, Part 4: Mailplane,” 16 March 2011), the app-specific browser RocketDocs from Tricky Duck helps Google Docs escape the confines of the Web browser. In both of these cases, the app is really just encapsulating the Web interface, relying heavily on the WebKit framework that underlies Safari as well, so the basics of Gmail and Google Docs work just as you’d expect, with the niceties of a Mac app surrounding them. They show up in the Dock and the application switcher,
support full-screen mode, and generally work like any other Mac app.

Once you configure RocketDocs with your Google credentials, it logs in and displays the contents of your Google Drive. (Technically, Google Docs has been folded into Google Drive, but most people still refer to the document creation and collaboration features of Google Drive as Google Docs, so I’m sticking with that terminology here.) If you have multiple Google accounts, you can switch between them easily in RocketDocs. 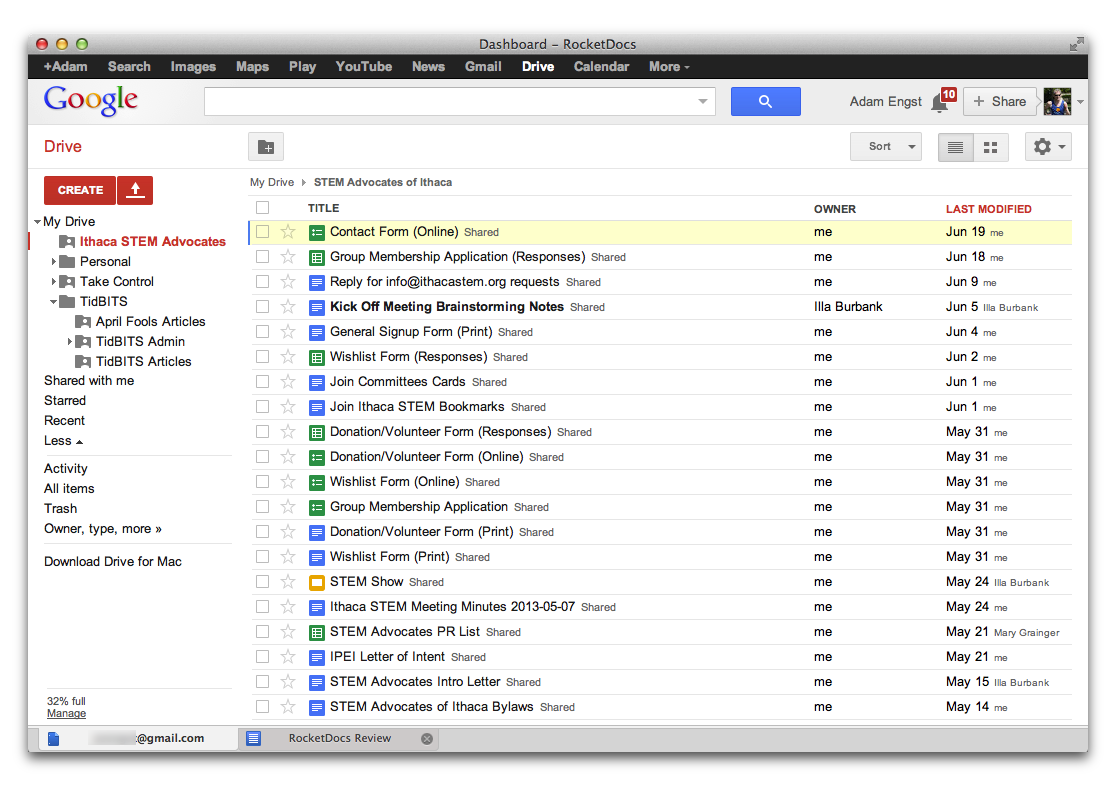 You can create new documents with Command-N or Command-T (akin to creating a new tab), and if you just want to add a file to your Google Drive, press Command-O or just drag it into the main file list. One nicety of using the Open dialog to upload is that you get easy access to the Google Docs conversion options. 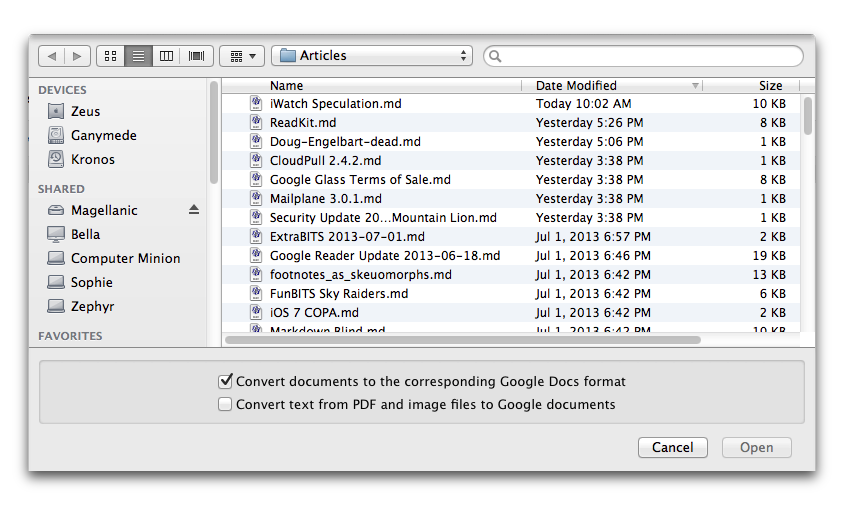 Clicking any document in the file list opens it in its own tab, with the tabs showing at the bottom of the window, rather than the top, as is common with Web browsers. You can switch among documents by clicking the appropriate tab, and close a tab by clicking its X button or pressing Command-W. The file list tab lacks a close button, but pressing Command-W still closes the window and switches to the previously frontmost app; switching back to RocketDocs re-opens the window and file list tab.

Once you’re in a document, everything works more or less as you’d expect, although I’ve experienced a number of minor annoyances. Most troubling is a clipboard-related bug. After some amount of time, pressing Command-C to copy selected text stops working, and just results in a beep. A quick paste with Command-V clears the clipboard logjam and enables copying text again, but since we develop text in Google Docs to move into the Take Control Web site, it’s frustrating to have to fiddle with copy and paste.

Printing requires more work in RocketDocs (and, to be fair, in Safari) than you’d expect, since choosing File > Print or pressing Command-P brings up not a normal Print dialog, but a Google Cloud Print dialog, which nominally lets you print to various devices you have registered with Google Cloud Print. Alas, adding a “classic” printer via my copy of Google Chrome didn’t result in a usable printout for me, and sending to my iPhone did nothing I could determine. What did work was using the Print From My Computer option, which creates a PDF that you can subsequently print from Preview. It’s much easier just to print from Google Chrome, which prints directly to your default printer on the Mac. 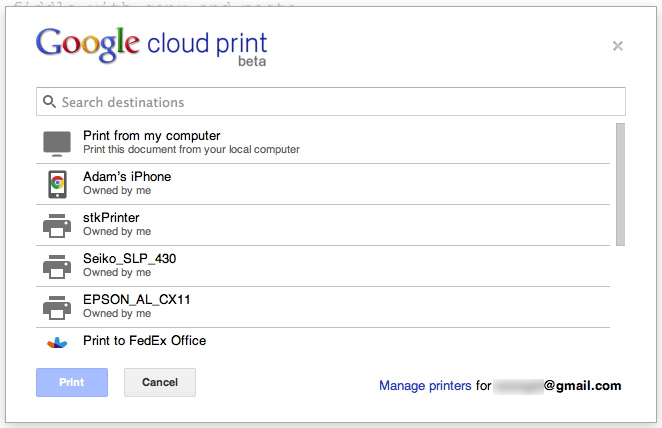 Some smaller nits. If you want to work in a larger view without changing the font size, you’d expect View > Zoom In to do the trick. It works, but then the cursor often ends up out of position, overlapping characters or even several characters to the side of where it actually is. Plus, if you open a document multiple times from the file list, you’ll get multiple tabs; RocketDocs isn’t smart enough to switch you to an existing tab for an already-open document.

Don’t misunderstand. Though these quirks are annoying, particularly the one with copying, they’re still more than made up for by the way RocketDocs breaks Google Docs free of my tab-laden Web browser. RocketDocs isn’t yet as polished an app as Mailplane, and Tricky Duck could do more to bring Mac-based interactions to the Google Docs experience.

For instance, there is a menu bar item that provides quick access to recent files and commands to create new documents and upload existing ones, but it feels bolted on, rather than cleanly integrated into the graphical interface of RocketDocs. (The same commands are replicated in the RocketDocs Dock icon menu for those who use the Dock heavily.) 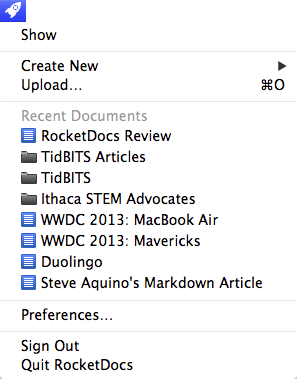 With the app itself though, there’s less integration. I’d like to see a sidebar in RocketDocs that lists recently used documents, so it would be easier to access them. Or, what if RocketDocs could tie into the Finder contents of Google Drive, if present? As it stands now, you can’t even open a file from Google Drive on your Mac in RocketDocs. There’s plenty of room for further integration with the Mac.

But again, RocketDocs performs its basic tasks well, and the only reason I’m looking for more integration is that RocketDocs has already earned a spot among the applications that are always running on my Mac.