To celebrate the fifth anniversary of the iOS App Store, Apple is making some of the most popular iOS apps free for a limited time. There are some great apps in this list, so don’t miss out! Even if you don’t know if you want the app, you can download it now, delete it, and then redownload it for free at any time in the future. 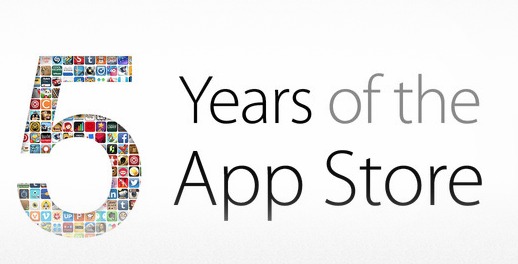 UPDATE: As of 15 July 2013, these apps have returned to their normal prices.

Barefoot World Atlas — An app for children that features an interactive globe full of trivia to discover. (Universal, normally $4.99)

Badland — A unique puzzle platform game that recently won an Apple Design Award, and was a recent FunBITS pick. (For my review, see “FunBITS: Badland for iOS,” 21 June 2013.) (Universal, normally $3.99)

Infinity Blade II — A graphically impressive mix between Diablo and Punch-Out!!, Infinity Blade II puts you in one-on-one matchups with warriors and monsters. The Infinity Blade series has won numerous awards, so be sure to grab this one while it’s free. (Universal, normally $6.99)

Over — Lets you add logos, captions, and drawings to photos. (Universal, normally $1.99)

Tiny Wings — A fun, physics-based game where you race a bird as far as you can before the sun goes down. An iOS classic. There are separate apps for iPhone and iPad, so if you only own one, now’s a great time to grab the other. (iPhone and iPad, normally $0.99 and $2.99, respectively)

Traktor DJ — A well-regarded DJ app for iOS. There are separate apps for iPhone and iPad, which together usually cost around $25, so even if you’re vaguely curious, this is a bargain you can’t pass up. (iPhone and iPad, normally $4.99 and $19.99, respectively)

Where’s My Water? — Disney’s hit water-physics game. Pick it up for the kids, but be wary of the numerous in-app purchases. (Universal, normally $0.99)

Thanks to Apple for providing some great apps at no cost. Be sure to look out for other freebies as well. While researching this article, I discovered more free apps outside of this promotion, including the creepy Dead Space, the acrobatic Mirror’s Edge, and the iOS classic, Flight Control. It’s a great time to stock up on your iOS app library.