FTL: Faster Than Light is a gripping space adventure for the Mac that has you on the run from a massive enemy fleet. You’ll have to contend with limited resources, enemy ships, boarding parties, and all the dangers of deep space apart from mind-numbing boredom. It has won mounds of awards, including IGN’s Best PC Strategy Game of 2012 and PC Gamer’s Best Shortform Game of 2012, and it was named one of NPR’s Best Games of 2012. But as good as FTL is, it’s also tough, and I have a few key tips that will help you stay alive long enough to enjoy the game’s challenges.

FTL doesn’t offer much in terms of a backstory, but any science fiction fan has heard it all before anyway. You command a Federation starship, like the stereotypical Federation from Star Trek, which has obtained information vital in the war against an evil Rebellion that threatens the galaxy. Your mission is to “jump” from system to system until you reach Federation headquarters, all the while pursued by the Rebel Fleet. If you’re a fan of Battlestar Galactica, then you’ll love FTL, as the scenario is strikingly similar.

FTL isn’t your typical space simulation. It’s based on roguelikes like NetHack and Dungeon Crawl Stone Soup. Like those games, FTL’s game content is generated randomly, and failure means starting over from square one. Also, unlike most space sims, you control the crew inside your ship manually.

You start with three crew members, whom you can assign to various ship systems. You have to have one crew member in the cockpit to go anywhere, and you get bonuses for assigning crew to other systems, like engines, shields, and weapons. Each crew member earns experience the longer they use a particular system, so it’s a good idea to keep each member on one system, and to try and keep them alive.

A good practice is to rename your starting crew members to match the systems they’ll manage. For example, “Pilot,” “Engines,” “Shields.” That way, it’s easy to keep them assigned to what they do best. If you’re so inclined, you can even name your crew after characters from your favorite franchises: “Riker,” “Han,” “Adama,” — I even saw one player name his crew after the Starks from Game of Thrones. (Though I personally would rather have Tyrion Lannister at the helm than Ned Stark.) 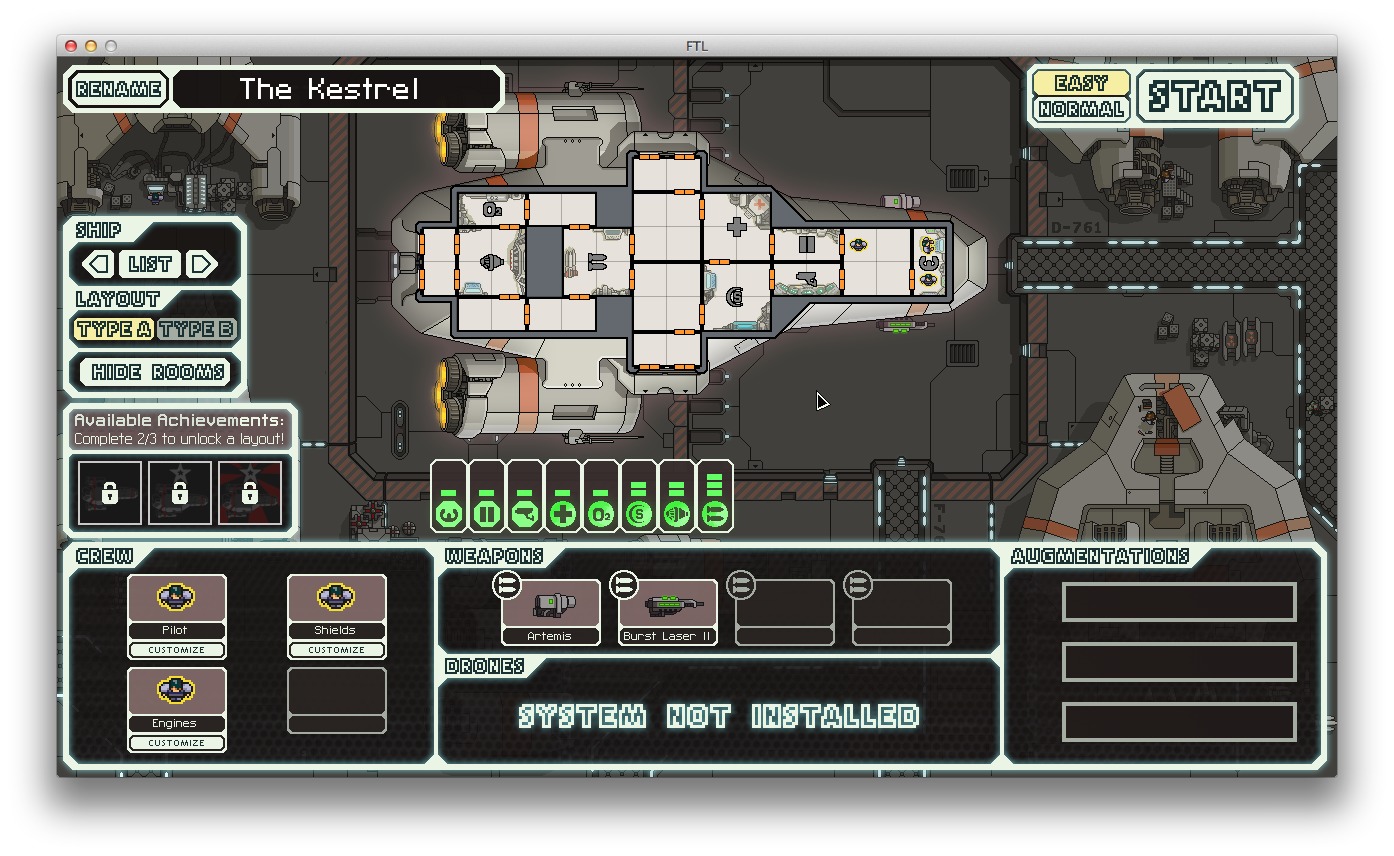 Having complete control over everything that happens in the ship leads to some interesting possibilities. You and your crew will have to repair damaged systems, repel hostile boarding parties, and extinguish ship fires, among much else.

FTL doesn’t suffer fools, even in the game’s easy mode, which I highly recommend to beginners. You must pay close attention to everything on your ship. Did an enemy ship disable your oxygen generator? You had better send a crewman to repair it quickly, or it’s game over. And even after you repair it, you must remember to turn it back on. Ship fire? The good news is that you can open your ship’s airlocks and doors to drain the oxygen out of the room, suffocating the fire. But if you don’t remember to close the doors, you’ll suffocate your crew instead. I hate it when that happens. Fortunately, you can pause the game at any time to plot your course of action.

To up the ante, you’re in a constant struggle for limited resources. The single currency of the game is Scrap, which is used to upgrade and repair your ship, buy new components, buy fuel, and hire new crew members. You obtain Scrap from random events and from defeating enemy ships in battle, either destroying them or accepting their surrender.

Fuel is another source of tension. You use one unit of fuel every time you jump between systems. It’s a wise idea to buy fuel where you can find it, because it can become scarce later in the game. Run out, and you’ll be stranded in space, forced to wait for a passing merchant or enemy ship. Or even worse, the Rebel Fleet may catch up with you.

The game’s universe is split into sectors, each containing a number of solar systems. You must jump from system to system to reach the next sector. Each system has the potential for opportunity or doom. You could happen upon an abandoned hulk to strip for Scrap; find a store where you can buy supplies, upgrades, and crew members; or stumble across a hostile ship. As you jump through systems, the enemy fleet approaches from the left side of the screen, taking control of the systems it passes over. If you cross paths with the fleet, you’ll be forced to do battle, but you also don’t want to rush through the systems, as you’re going to need as many upgrades as you can buy. 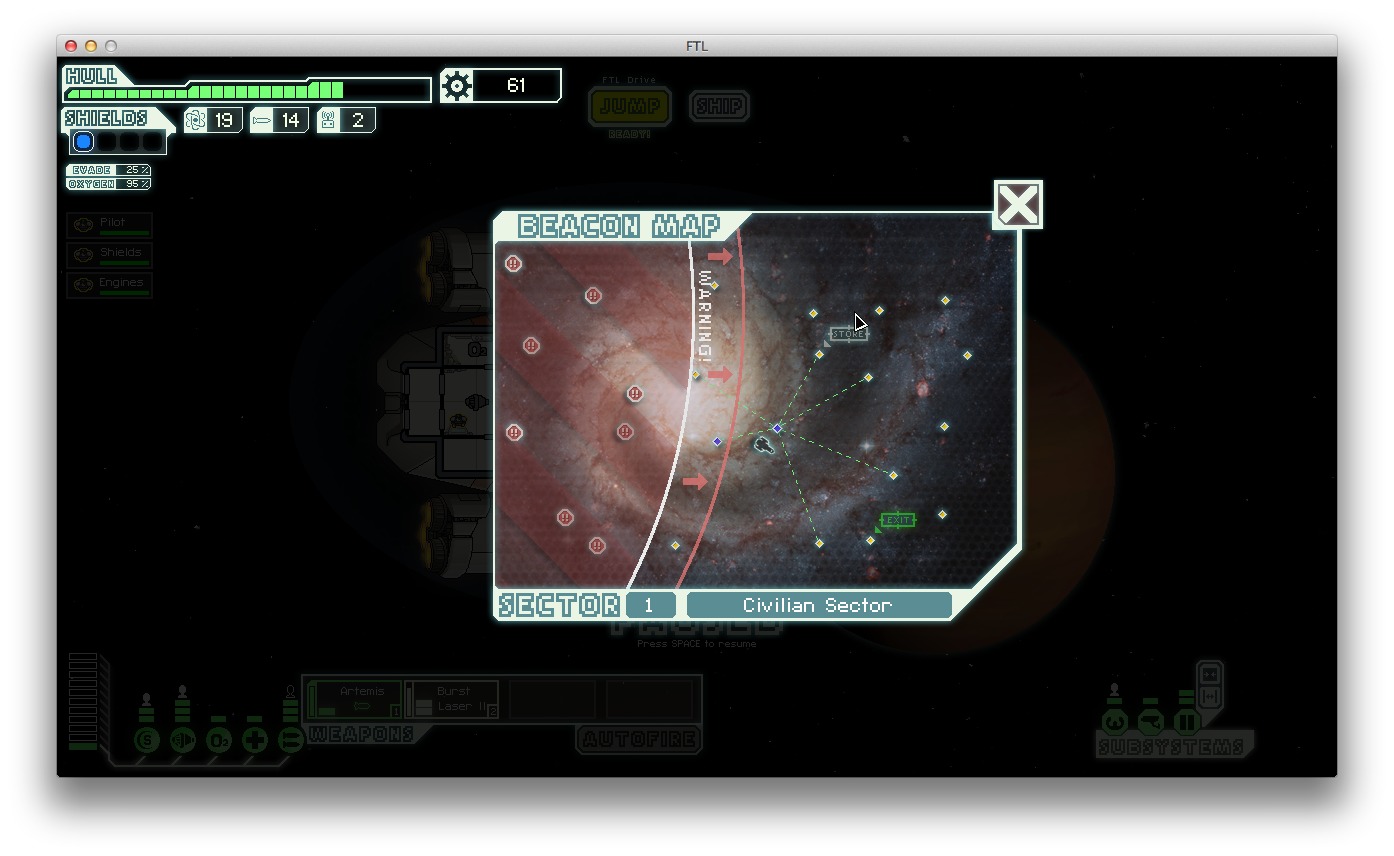 Battles happen in real time. Your ship appears on the left of the screen, the enemy ship on the right — fortunately you’ll never have to fight more than one ship at a time. Early on, combat is simple: power up your weapons, take aim at the enemy ship’s systems, and systematically destroy them. My advice is to target enemy weapons first. Once disabled, the enemy can’t damage your hull, which costs precious Scrap to repair — and thus hampers your ship’s upgrades. Another tip is to fire your weapons together as a volley, since
that increases your chances of breaking through enemy shields. 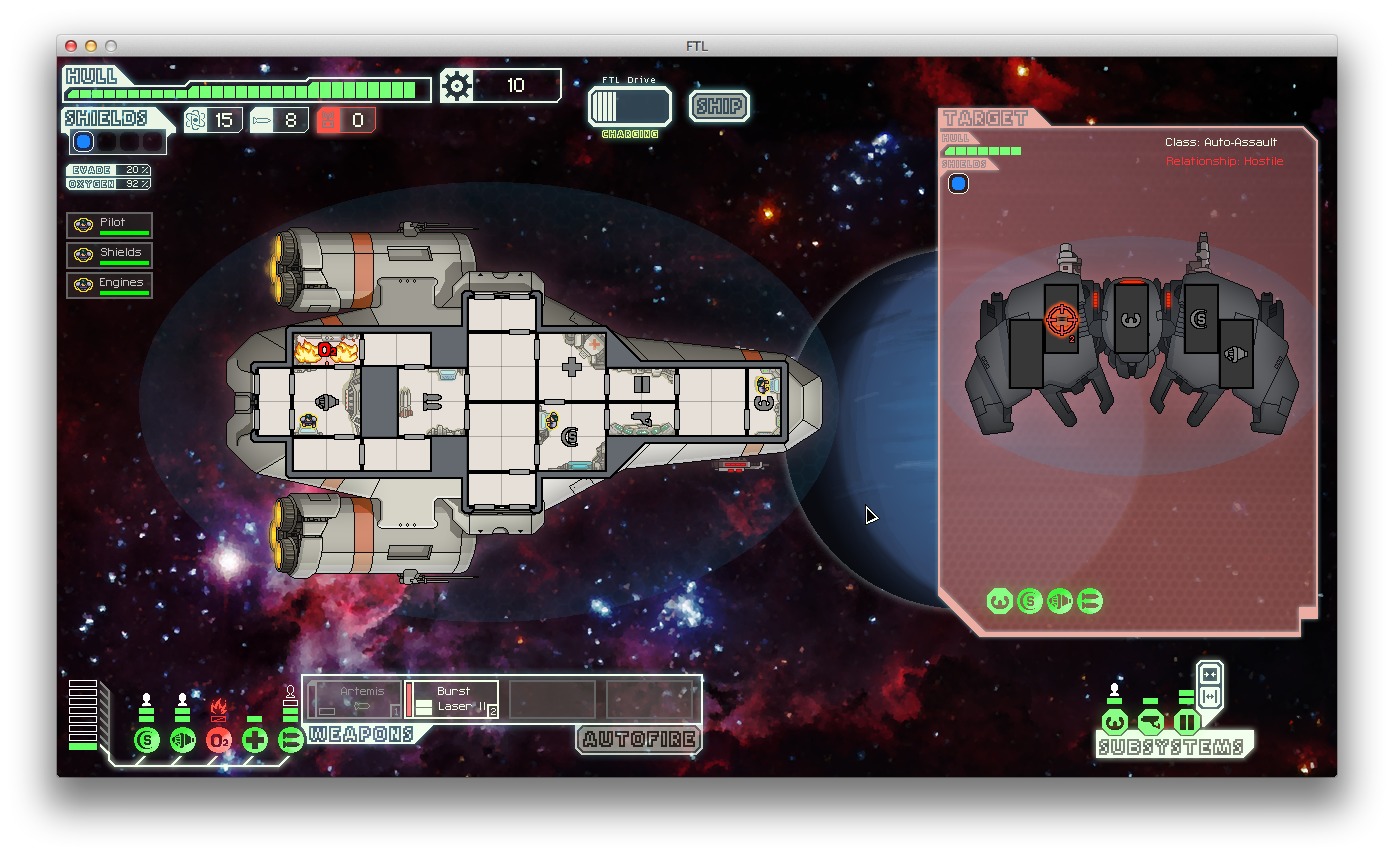 Later in the game, enemy ships come equipped with teleporters, so you can expect to be boarded. Once on your ship, enemies attack your crew and sabotage your ship’s systems. Boarding parties are one of the toughest challenges for new players, but I have some tips to help. First, upgrade your doors to blast doors early on. Doing so costs only 20 Scrap, slows down the spread of fires, and most importantly, boarders will have to cut through a door before opening it, slowing them down. Second, pause the game as soon as they board, send as many
crew members as you can to the Medbay, and then open every door on the ship except for the Medbay, including airlocks. This will suck the oxygen out of the ship except for the Medbay, which in turn drains the enemy’s health. By the time they open the Medbay doors, their health will be low, and they’ll have to contend with a room full of your crew, who are constantly being healed by the Medbay. Third, save up your Scrap, and eventually you’ll be able to afford a teleporter to board the enemy’s ships yourself. 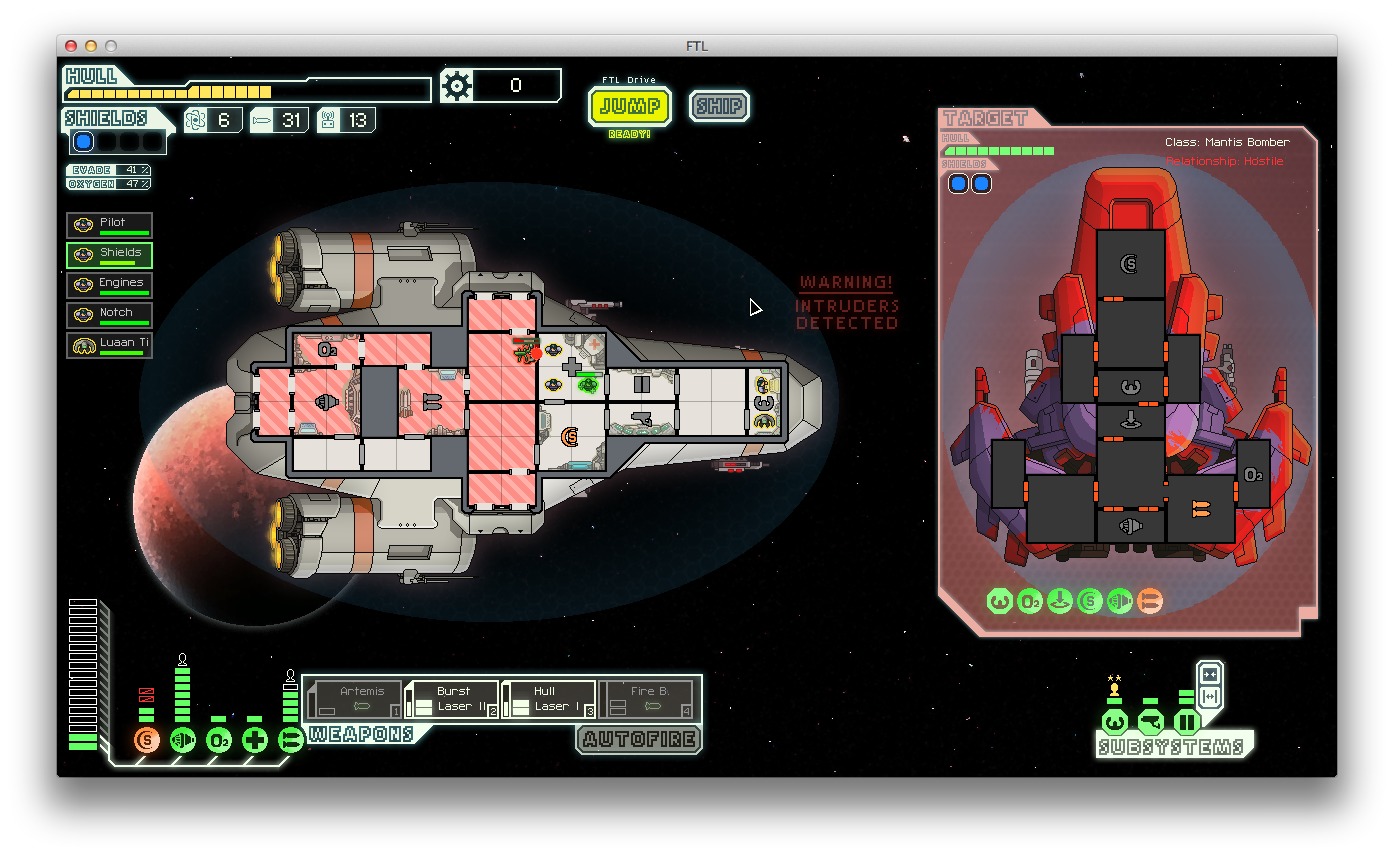 Destroying enemy ships often yields Scrap, but sometimes also weapons, fuel, and additional crew members. Unless it’s a Rebel Fleet ship. Fleet ships are incredibly tough, and the only reward for defeating them is one measly unit of fuel. Your best bet is to disable their weapons and teleporters until your FTL drive charges up, and then make a run for it. In general, if a fight isn’t going your way, go ahead and jump. I also advise upgrading your engines as early and often as possible, because that helps your FTL engines spin
up faster, and you’ll dodge more attacks as well, making engines even more valuable than shields, which don’t protect against missile attacks.

If you’re skilled and lucky enough to make it all the way to the end, you enter the Last Stand sector, where you must destroy the Rebel Flagship before it gets too close to the Federation base. Or so I’m told; I have yet to get that far.

FTL is a tough game. In fact, FTL might as well expand to “For The Loss,” because you’re going to die… a lot. But what I love about FTL, as opposed to more scripted games, is that its complexity and randomness lead to potentially great stories you can share. The FTL Forum is full of them. You teleport a boarding party to an enemy ship, but it jumps away with your crew. You run out of fuel, and manage to fight your way through the Rebel Fleet until you can reach a store. Or maybe, just once, you manage to defeat the Rebel Flagship and make it home alive.

I purchased FTL during a recent sale on Steam, Valve’s much-loved gaming service, for a measly $2.50. However, if you can buy the game direct from the developer during a sale, I think it’s actually a better deal. They give you a code to redeem on Steam, but they also include DRM-free copies of the game for Mac OS X 10.5 Leopard and later, Windows, and Linux (sadly, it’s not yet on iOS). In addition, the developers receive more of the purchase price. Outside of sales, FTL retails for $10 — relatively pricey in the App Store era, but still highly worthwhile, as given the dozens of hours of entertainment it offers.