Rumors of a cheaper iPhone with a plastic case replacing the glass-and-aluminum cases of the last few iPhone models have been flying for years, but a video released to YouTube by user DetroitBORG provides some convincing evidence. In the video, he shows off a white plastic iPhone back panel, provided by blogger Sonny Dickson. If the part is fake, it’s an amazing forgery, as it even includes chassis components like the digitizer and camera lenses.

I doubt the case shown is fake, but it could just be an Apple design experiment. However, Dickson has also posted photos of similar back panels in a rainbow of colors, implying that they’re being mass produced. If so, that would suggest a plastic iPhone debuting later this year, likely in conjunction with iOS 7.

The more interesting question is: why might Apple return to plastic for the case? When the company killed the white plastic MacBook in early 2012, it seemed as though it would be the end of plastic Apple devices, apart from AirPort base stations and the Apple TV boxes.

The usual answer is to have a cheaper device for emerging markets and to compete at lower price points. Despite other products lagging in sales, the iPhone is booming, especially in emerging markets like India, which saw a 400 percent increase in sales in Q3 2013 (see “Apple Q3 2013 Results Repeat Higher Revenues and Lower Profits,” 23 July 2013). Based on Tim Cook’s comments during that investor call, it’s the older models of iPhone — the 4 and 4S — that are largely driving that growth.

But why not just keep selling older models at a discount, as Apple has done so far? When the next iPhone — call it an iPhone 5S — comes out, Apple could drop the iPhone 4, make the iPhone 4S free with a two-year contract, and sell the iPhone 5 for $99. Why not do that? Because the iPhone 5 is an expensive device to make. Although the materials costs for the iPhone 5 aren’t that much different than the iPhone 4S, having been estimated by iSuppli at launch to be between $207 and $238, depending on storage capacity (the previous model ranged from $196 to $254), the problem may instead be manufacturing yield.

As Apple’s Senior Vice President of Design Jony Ive boasted at the iPhone 5’s launch, Apple’s fit tolerances are so tight that iPhone 5 front and back panels have to be matched with a high-precision camera to within a few microns of each other. To put that in perspective, a human hair is about 75 microns wide. That’s a tough feat to pull off in manufacturing, and it’s likely that many iPhone 5 casings have to be rejected.

While we can’t be sure what the yield rate of the iPhone 5 is, we can look at Apple’s reported cost per sale to see the impact. In the chart below, we see that Apple’s cost per sale plummeted in the first half of fiscal year 2012, but rose a whopping 67 percent between Q3 2012 and Q1 2013. What changed? 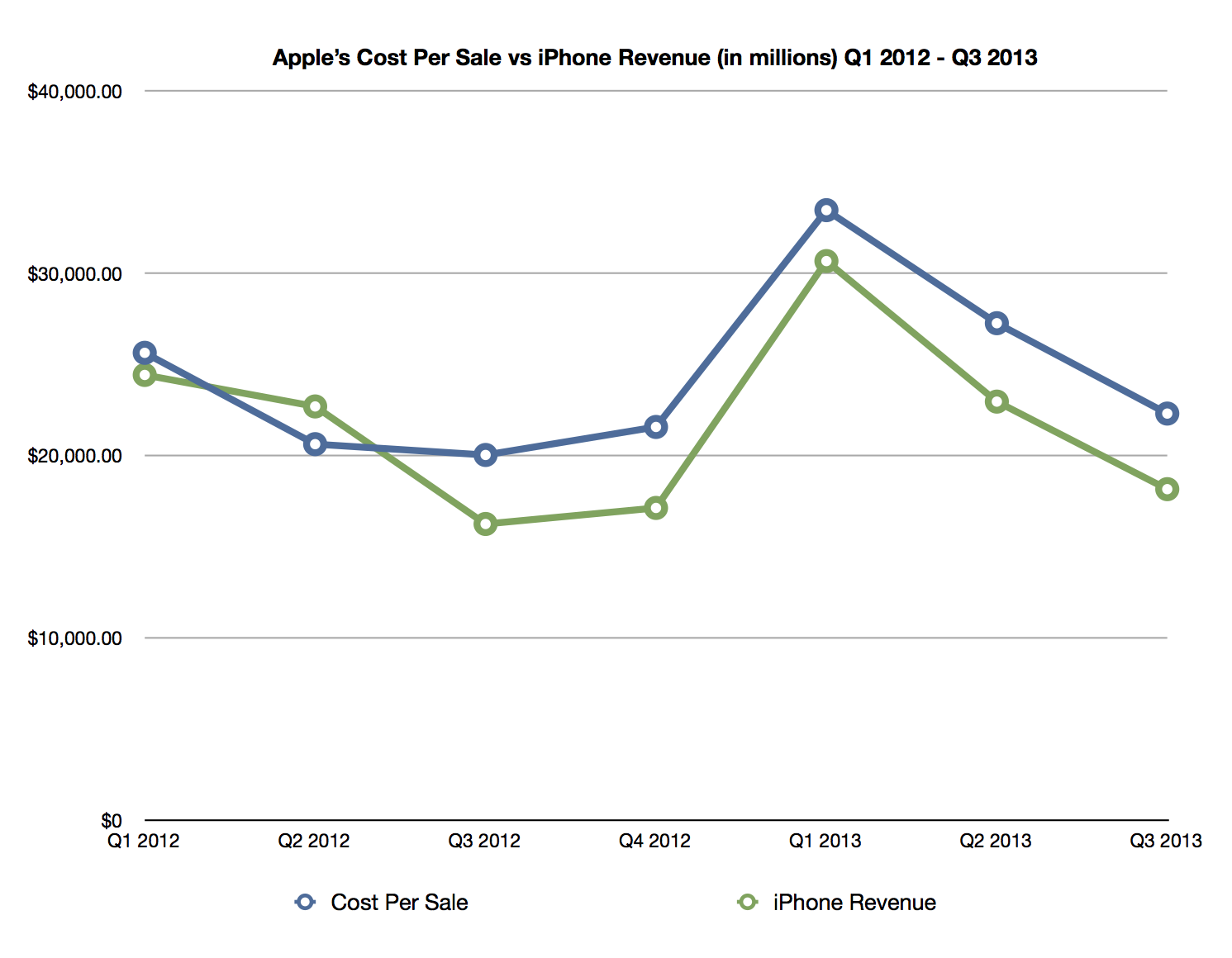 In short, the iPhone 5. It was released 21 September 2012, right at the tail end of Apple’s fourth quarter. Costs began to trend up in Q3, just before its debut, and in Q4, we start seeing Apple’s costs moving in sync with iPhone revenues.

Apple has since taken a hit to its gross margin, which is down nearly 6 percent from a year ago, a worrying trend for investors, and the iPhone 5 is a likely suspect. With such a difficult manufacturing process, Apple may not be able to justify lowering the price of the iPhone 5 as it has in the past with previous iPhone generations. And at the same time, the company is clearly looking hard at what’s necessary to satisfy developing markets with a less-expensive iPhone.

As for the internal components, they could be identical to the iPhone 5, to take advantage of those parts becoming cheaper over time and of economies of scale in purchasing. Wrapping the iPhone 5 in a plastic case exploits those lowered costs and trades pricier glass and aluminum for molded plastic, all while sidestepping the thorny precision construction of the iPhone 5’s casing. Such an approach also gives Apple the opportunity to release an iPhone 5S with improved specs to create price differentiation in the iPhone product line.

Comments About The Case for a Low-end Plastic iPhone