When Nintendo’s Wii, with its innovative motion controller, debuted in 2006, it took the gaming world by storm. People were blown away by being able to play games like tennis by swinging the Wii Remote like a racket. The night before launch, gamers all over the United States were lining up at stores to get their hands on one. I should know, since I spent an entire night in the freezing cold outside a Best Buy to buy one for my little brother. To date, the Wii has sold nearly 100 million units worldwide.

But in spite of its popularity, third-party developers refused to pour resources into it because of its dated, standard-definition internals. Other than first-party titles like Super Mario Galaxy and The Legend of Zelda: Twilight Princess, the Wii suffered from a paltry library. So in spite of its incredible sales numbers, a puzzling lack of support has made dusty Wiis a fixture in closets around the world. The Wii has since been succeeded by the Wii U, which eschews motion controls for a tablet-like controller.

But the idea of motion control didn’t die with the Wii, and you no longer need special gaming hardware to join in on the fun. A couple of innovative games have brought the concept to the iPhone.

Motion Tennis — One of the most interesting games I’ve seen for iOS in a while is Motion Tennis by Rolocule Games ($7.99). It combines your iPhone (4S or 5) or fifth-generation iPod touch with a second- or third-generation Apple TV to provide a motion-controlled tennis experience in your living room. 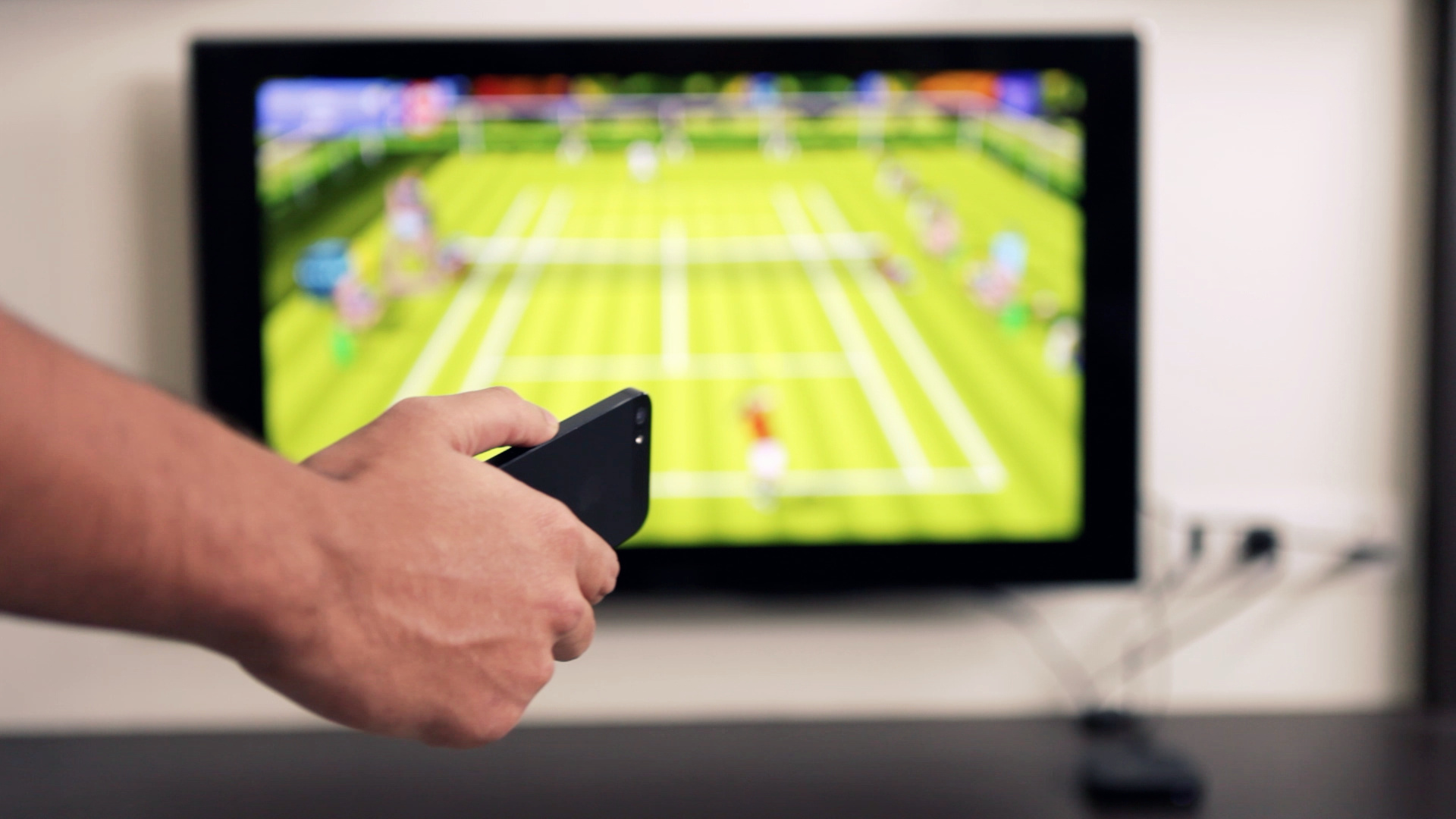 Before you run out and buy Motion Tennis, though, be aware that it requires an Apple TV to function — it is not a standalone iOS game. Also, it is not compatible with the iPhone 4, except as a client for multiplayer, as the iPhone 4 does not support AirPlay mirroring.

Before launching Motion Tennis, you must enable AirPlay mirroring on your device. To do so, double tap the Home button to bring up the multitasking bar, then slide the multitasking bar to the right twice to access the AirPlay button, which is represented by a rectangle intersected with a triangle. Tap that button, select your Apple TV from the list, and make sure the Mirroring switch is set to On. 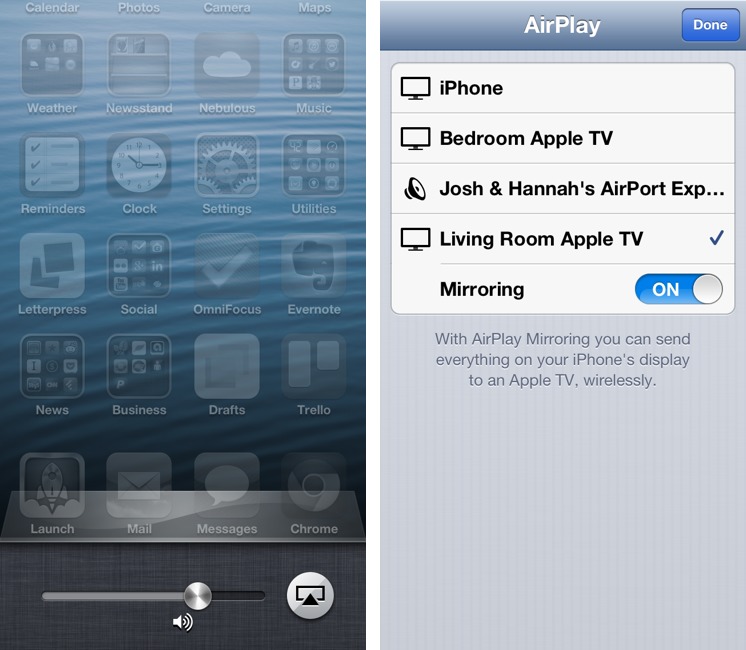 Once you launch the game, you have the choice of playing a match against a computerized opponent, playing a doubles match against another player who owns the game, or playing a survival mode that pits you against an endless battery of opponents. The game tracks the calories you burn, which is a nice touch, but don’t expect to get in shape playing Motion Tennis. 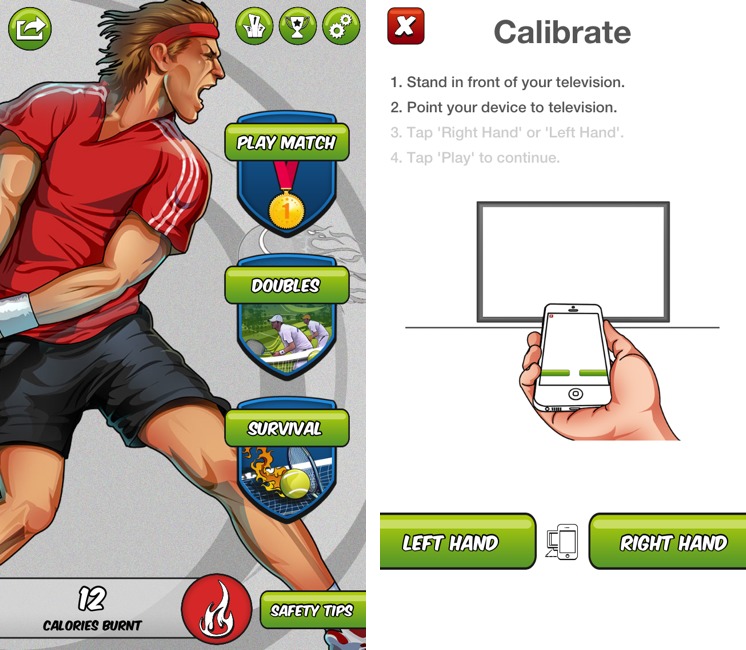 When you start the game, you have to calibrate your device by holding it flat and selecting which hand you prefer. The motion controls work great in my experience. Your swing in the game changes depending on the angle and speed at which you swing your iPhone.

However, Motion Tennis drains power quickly, causing your device to heat up. That heat leads to sweaty palms, and a slippery hand combined with a glass-encased phone and fast arm swings could lead to an expensive fastball through your living room, or, worse, through your TV screen.

There are a couple of solutions for this. If you’re playing with a fifth-generation iPod touch, it features a built-in wrist strap stud, which handily solves the problem. However, if you have an iPhone or an older iPod touch, try the SwitchEasy SW-LAN5-BK lanyard case, which currently costs $23.58 at Amazon.

Motion Tennis is fun, but it’s full of provisos. You must spend $7.99 on the game, own an Apple TV, calibrate the device each time you want to play, and possibly spend more money on a case to keep from destroying expensive hardware. But despite that, I applaud Rolocule Games for such an innovative idea, and if you own an Apple TV and don’t mind picking up the necessary lanyard case, it’s worth checking out. Rolocule Games has hinted at future titles with this technology, and I’m curious to see what they do with it.

However, if you don’t own an Apple TV, there’s a free alternative that’s arguably even more impressive.

Roll It — One of the most jaw-dropping tech demos I’ve seen in years is Roll It, a Google Chrome Experiment that takes Web gaming to a whole new level. 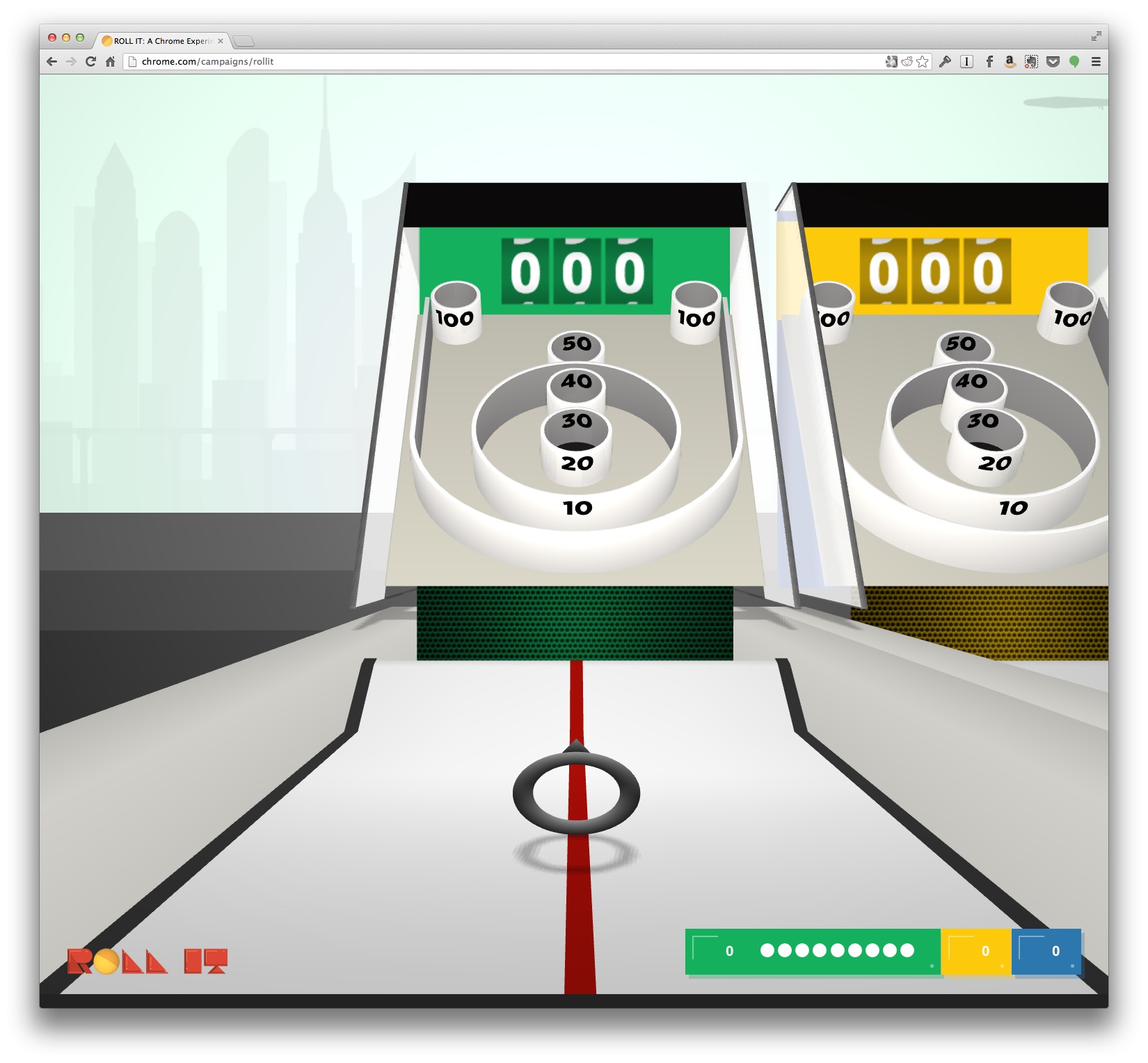 Roll It combines your desktop computer’s Web browser and your smartphone for a motion-controller variant of skee ball. What’s so impressive is that it does all of this inside a Web browser. It supports any modern browser, but of course recommends Google Chrome.

To play, visit the Roll It page on your computer, and then pick up your smartphone. On your phone, open a browser, navigate to a special Web page, and enter a code to sync your phone with the game. 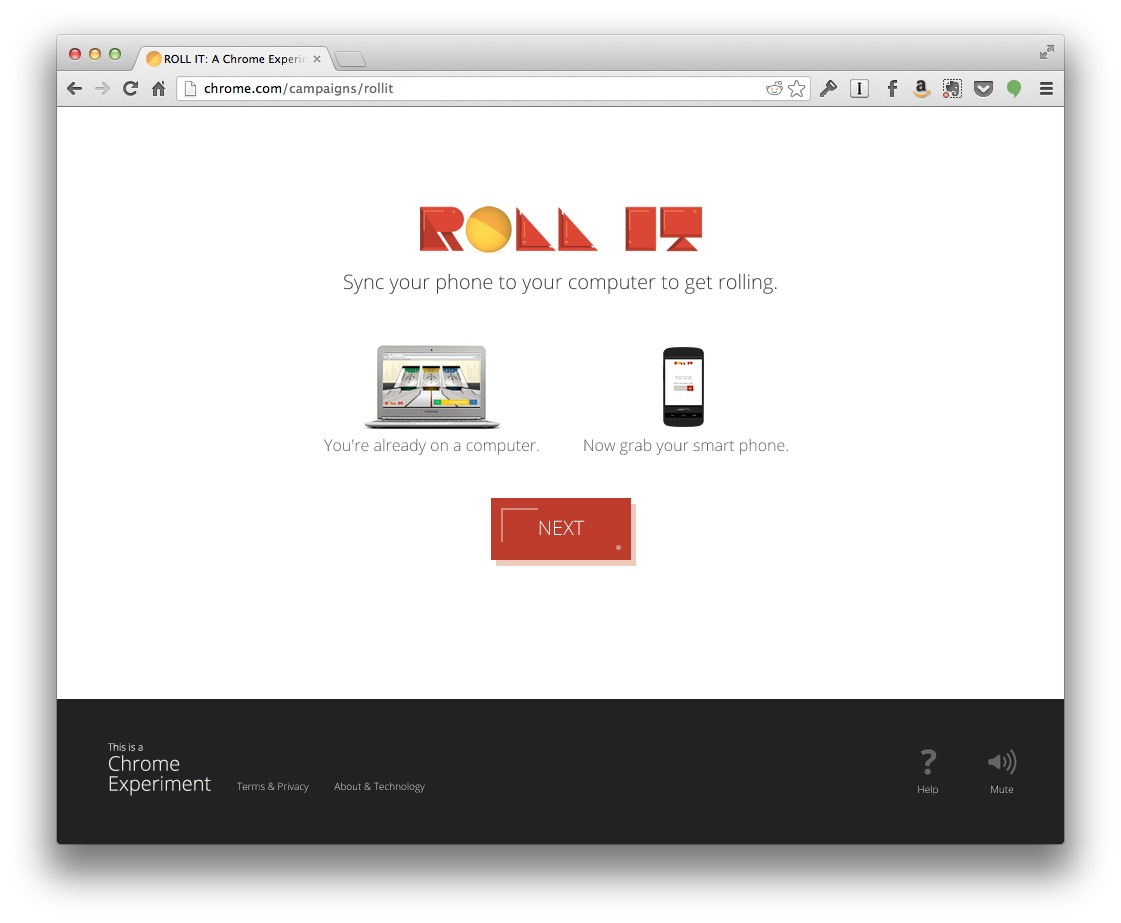 Once synced up, tilt your phone to navigate the game’s menu. You can play solo, or with up to three players.

As for the game itself, well, it’s skee ball, though each level is a different take on the game. You swing your phone to throw the ball, which responds to how fast you swing, as well as the angle. You can also control the direction of the ball by adjusting a control on your phone’s screen. 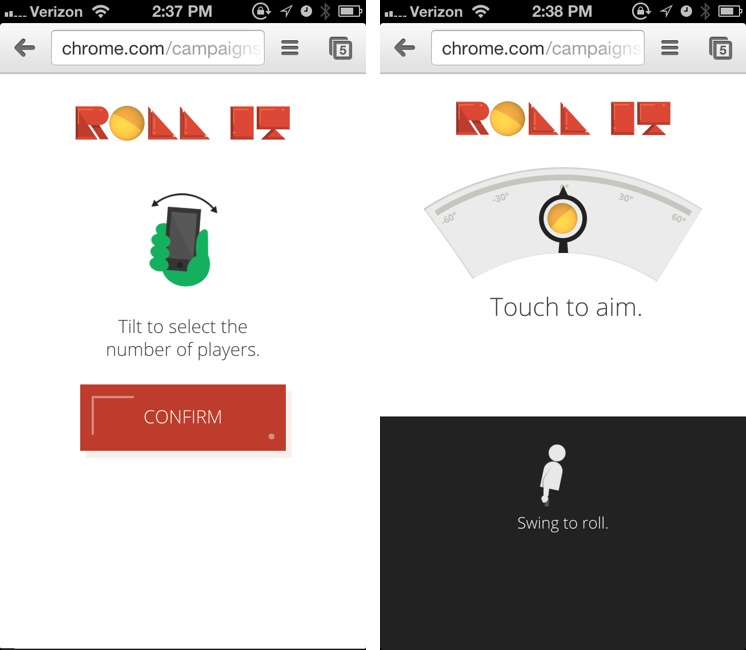 Befitting its “experiment” status, Roll It is far from perfect. For instance, if you switch away from your browser, your phone loses sync with the game, and you have to start over.

But despite that, Roll It is still mind-blowing. Motion control that works with any smartphone, and 3D graphics in a Web-based game! If you own an iPhone, you owe it to yourself to check out this modern miracle, since it’s totally free to play.

Get Moving — As impressive as these games are, they’re little more than gimmicks. But what they demonstrate is that mobile gaming is fast encroaching in the space once dominated by game consoles. These two titles are sure to fire up the imaginations of developers. And with Apple pushing harder into the gaming space — via upcoming technologies like game controller support in iOS 7 and Sprite Kit, which makes 2D game programming dead-easy — I think we’re about to see the iPhone and Apple TV sneak up from behind to become a major threat to entrenched console developers like Microsoft, Sony, and Nintendo. Electronic Arts, the world’s third-largest gaming company,
already brings in more money from Apple than any other platform. The next five years should be an exciting time for Apple gamers.