The Apple TV is Apple’s most underrated device, and I would argue, one of the most important for the company’s future direction. For many of us, the small black box is what ties the Apple ecosystem together — turning an iPhone into a home entertainment powerhouse while simultaneously encouraging investment in proprietary iTunes content. That’s why I was so intrigued when Google announced the Chromecast last week. Unlike the company’s previous Google TV efforts, which were expensive, complicated, and kludgy, the Chromecast is a $35 HDMI dongle that does nothing on its own. Instead, it relies on the Chrome Web browser and compatible apps to “cast” content
to it — a bit like Apple’s AirPlay.

I was fascinated by the device and ordered one immediately. Good thing, too, as it quickly sold out, and the included three months of Netflix that Google touted as an indefinite deal was yanked the next day due to the overwhelming response. Full credit to Google, they upheld their promise and sent me the Netflix promo code.

The packaging for the Chromecast is remarkably Apple-like. Once you slide the box out of its blue and white sleeve, it folds open to reveal the device; underneath is an HDMI extension cable, a micro USB cable, and a USB power adapter. 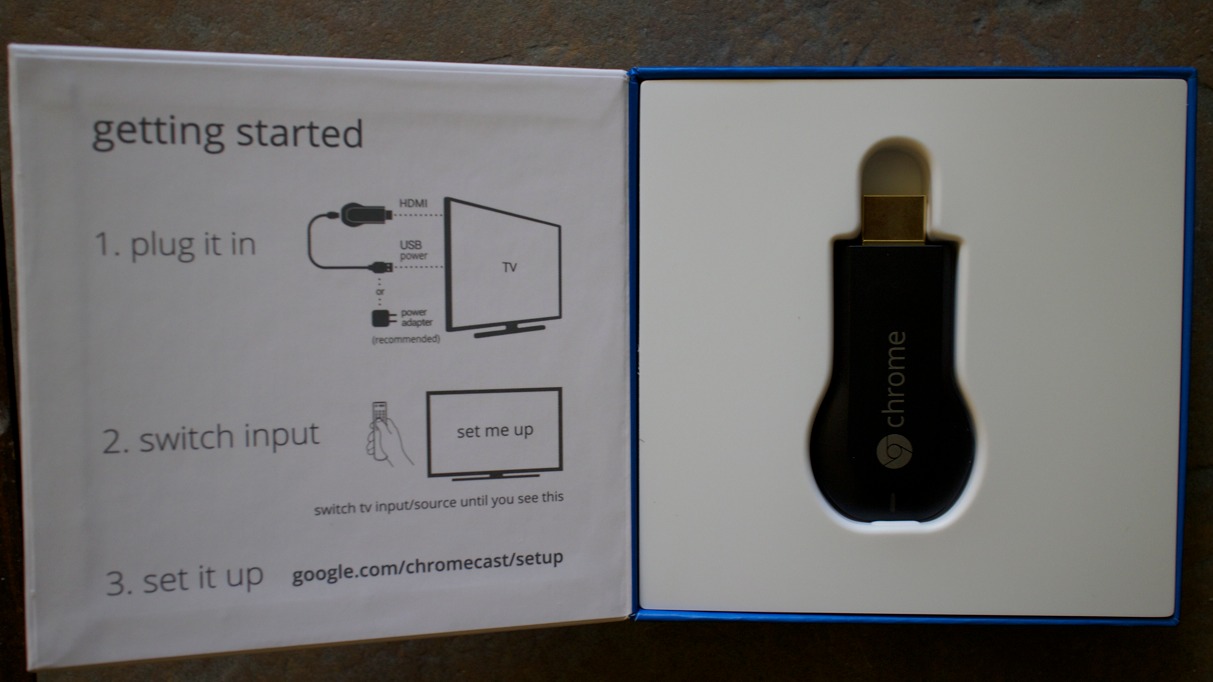 The Chromecast itself is tiny, measuring less than 3 inches (7.6 cm) long. On one side is the HDMI plug, which you insert into your TV. On the other is a power light, a button that resets the device to factory defaults if held down for 25 seconds, and a micro USB port that’s necessary for power. You plug the included micro USB cable into the Chromecast, and then into either a powered USB port on the TV, if one exists, or into the included USB power adapter. My Sharp television didn’t provide power on the USB port, so I had to use the
power adapter. 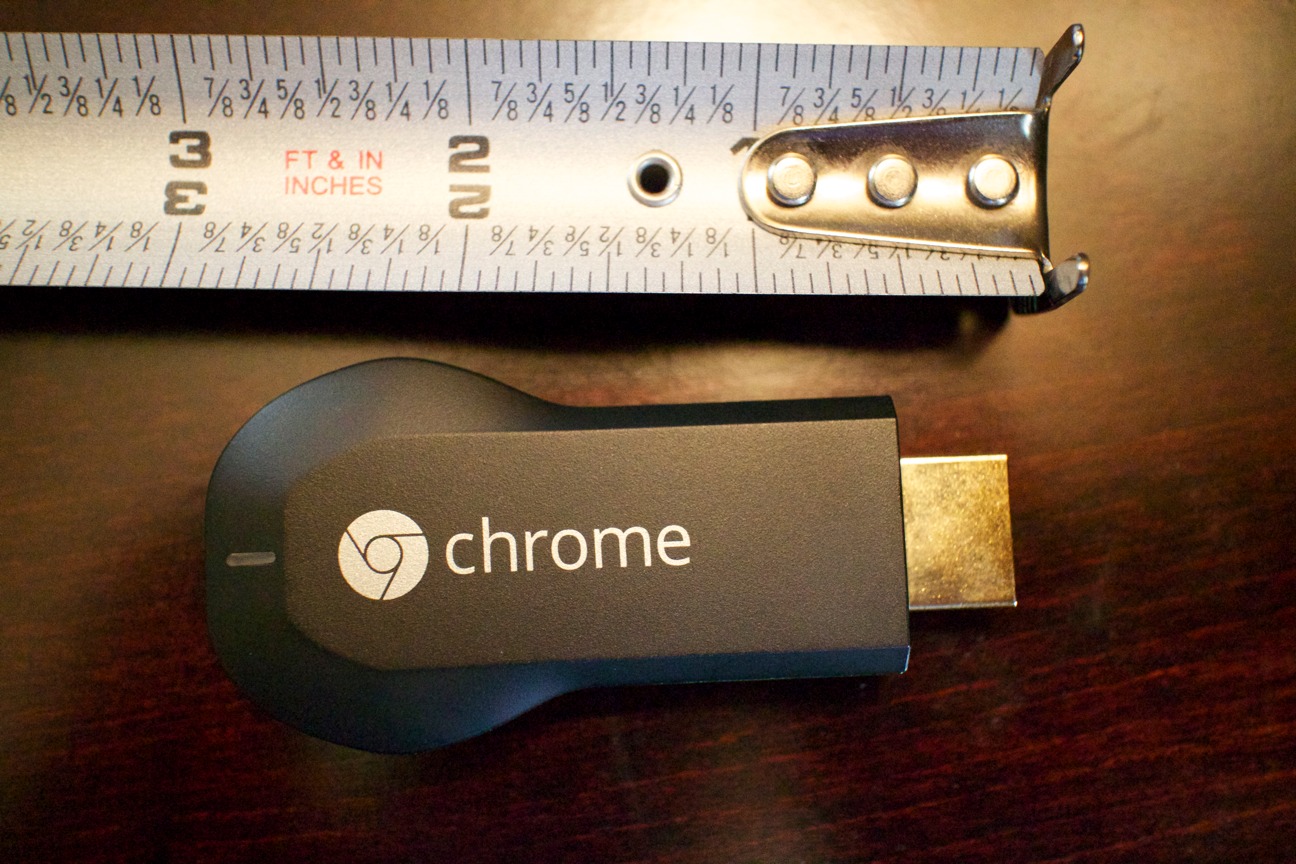 One port that is notably absent is optical audio. So if you’re like me and own an older home theater receiver without HDMI, you’re stuck with whatever audio is available from your TV. Also, unlike the Apple TV, which can send audio to any AirPlay-enabled receiver, the Chromecast can’t wirelessly send audio to another device.

Once you have the Chromecast plugged in and powered, switch your TV to the correct input to start setup. Visit the Chromecast Setup page on an iPhone, iPad, or Mac to begin. I recommend setting it up via the Mac, as Google has provided a native Mac application (click the Download button) that makes setup practically automatic — it can even pull your Wi-Fi password from your Mac’s keychain. I originally set mine up with an iPhone, which was also fairly painless, though I had to disconnect from my AirPort base station and manually connect to the Chromecast over Wi-Fi. Don’t panic, as this step is only temporary. Just open the Settings app, tap Wi-Fi, and select the Chromecast
network. After setup is complete, go back into Settings > Wi-Fi and reconnect to your current network, which should take only a few taps. 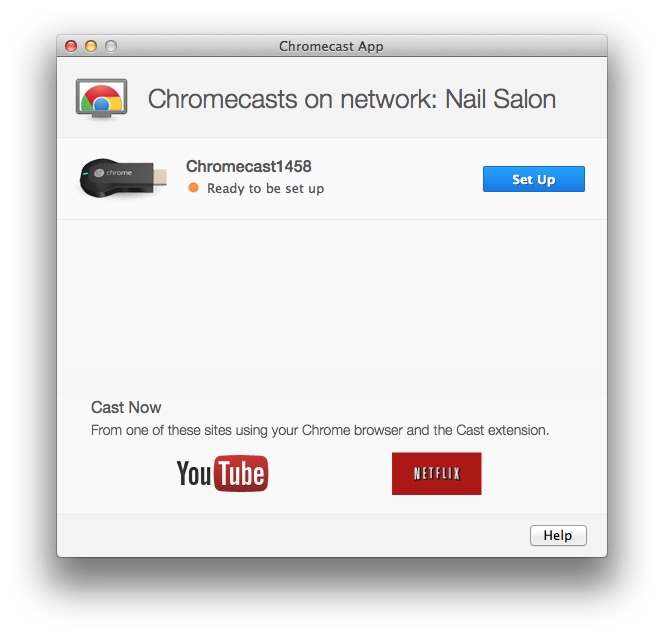 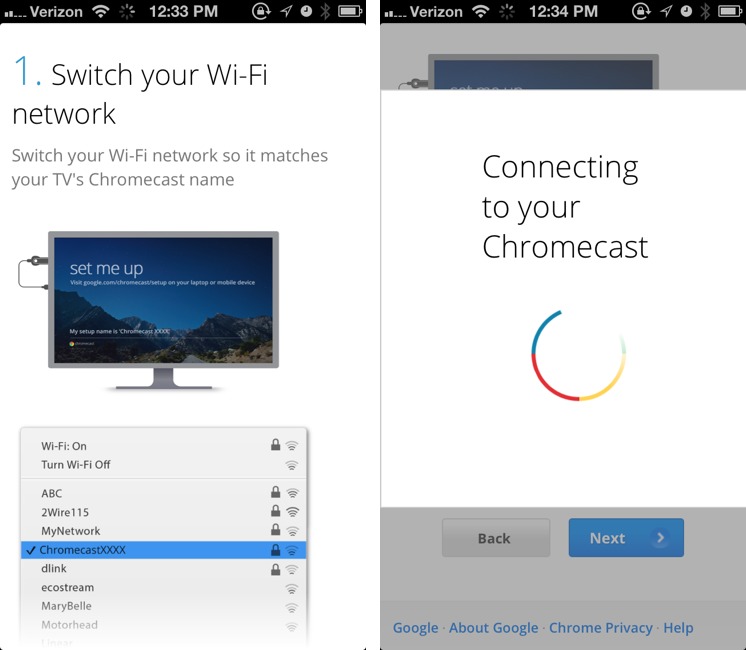 With the Chromecast set up, it’s ready to receive video from compatible applications, which so far include only Chrome on the Mac, Windows, or Chrome OS; Netflix for iOS; and YouTube for iOS. You cannot currently cast tabs from Chrome for iOS. However, Pandora, Vimeo, and HBO GO are reportedly working on
Chromecast support, and any developer can use the Google Cast software development kit to add support to an app. Certain Web apps, such as YouTube, also include direct Chromecast support. If you own an Android device, you can also cast Google Play content to the Chromecast. 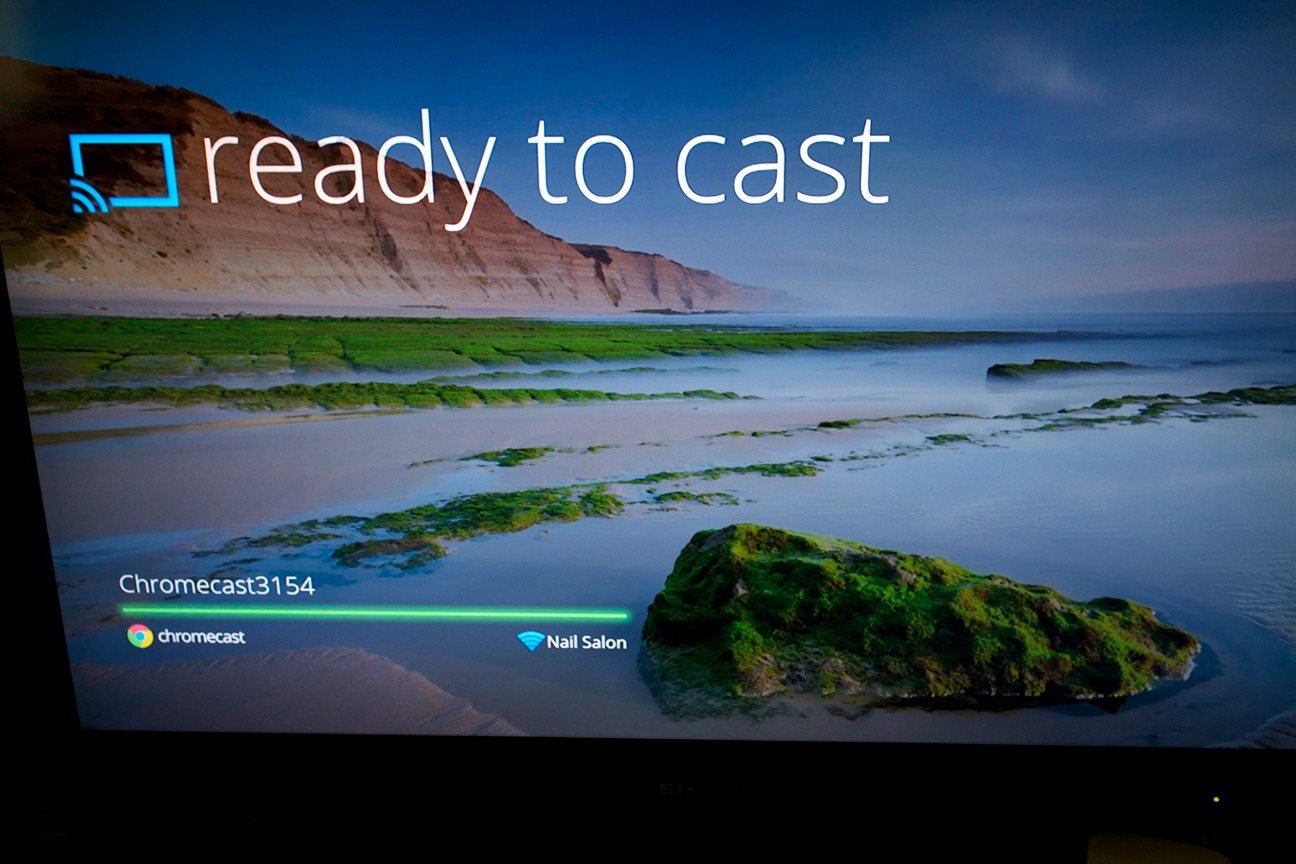 In any Chromecast-enabled app, you just have to tap the Chromecast button, which is a rectangle with curved lines in the lower-right corner, to send content to the TV. To enable this in Chrome on the Mac, you must first install the Google Cast extension, a step that Google seems to have glossed over in the instructions. 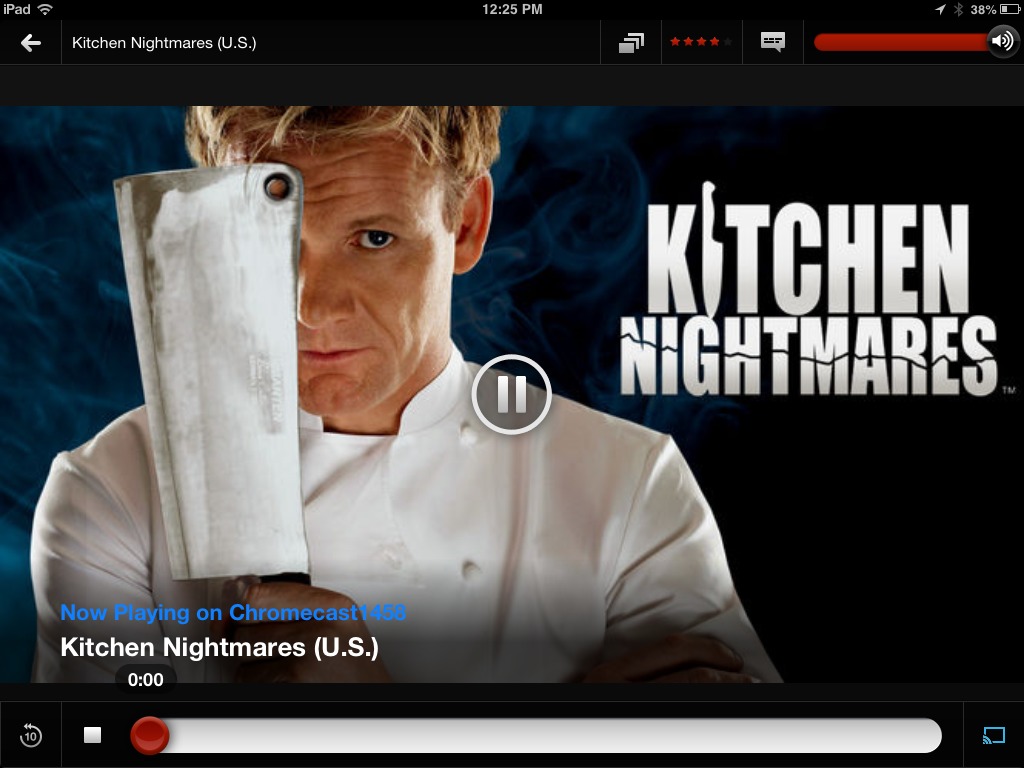 This simplified approach has advantages and disadvantages when compared to Apple’s method. It does eliminate some confusion. When using AirPlay, it can be difficult to predict what will happen if you send the app to the background, put the device to sleep, or try to control your content with the remote control. On the Chromecast, you don’t have to worry about switching away from the Netflix app, because the Chromecast is processing the video independent of the device. However, if you need to pause or
stop the video, or turn down the volume, you might find yourself fumbling to get back to the app, instead of just picking up a remote.

The other big disadvantage is that video looks worse on Chromecast than on Apple TV. It often takes longer to load, appears fuzzy for a bit, and then sharpens into HD quality. But even at its best, the video quality looks hazy, like a fine film of petroleum jelly has been smeared over it. Audio quality also sounds poor compared to Apple TV, but since I can’t use the Chromecast with my home theater speakers, it could just be my TV’s lousy speakers.

While I didn’t notice any sort of burn-in protection on the Chromecast, TidBITS reader Garrett White made a time-lapse video, spanning the course of 20 minutes, showing how the Chromecast slowly shifts screen elements to prevent burn-in. Despite improvements in screen technologies, burn-in, where a fixed image becomes permanently etched into the screen, is still a problem on many displays.

The nice thing about the Chromecast is that with the Google Cast Chrome extension, you can send any browser tab to your TV. Even if you switch between apps and tabs on your Mac, the same tab remains on the TV. In some ways, this is better than OS X 10.8 Mountain Lion’s desktop mirroring, since you can continue to work on your Mac while you stream content to the TV. If you like to watch content from Flash-based Web sites, the Chromecast could be a great addition to your home entertainment system. Also, you can view Hulu content on your TV without a Hulu Plus subscription, but since each video opens in a new tab, prepare for lots of micromanagement.

Curious to push the Chromecast to its limits, I decided to try to play a game of Roll It, Google Chrome’s experimental skee ball game (for more on that, see “FunBITS: Motion Control Games on Your iPhone,” 26 July 2013), on the Chromecast. Since it was released days before the Chromecast, I figured it was meant to be played on a TV. Unfortunately, there is about two seconds of lag between what happens in Chrome and what appears on your TV screen, making gaming nigh impossible. In comparison, AirPlay-enabled games usually work quite well on the Apple TV.

Considering that the Chromecast’s $35 price is roughly a third of the Apple TV’s $99 cost, you get what you pay for. I can say that for me, the Chromecast will not be a fixture in my living room. The lack of optical audio kills it for me, as well as the current paucity of apps and crippling lag for games. However, if you own Android devices or are curious about digital content on your TV, the Chromecast is an inexpensive way to dive in — once Google has more in stock.

If you’re in business or education, you might be tempted by the Chromecast for presentations, but I would recommend the Apple TV instead. While you can password-protect AirPlay on an Apple TV, there is no such capability on the Chromecast. For a high school teacher, the Chromecast is wide open to a potentially career-limiting prank.

While the Chromecast is not currently a threat to the Apple TV, Apple would be foolish to ignore it. Google is working hard to bring content providers on board, and I suspect they will join at a breakneck pace. Just as I think the Apple TV is key to Apple’s future, the Chromecast might, in the long run, prove equivalently important to Google’s.