One of the hottest ideas in the tech world now is the quantified self — the concept of monitoring oneself, recording the data, and using it for self-improvement. This has been applied mostly to personal fitness, with gadgets like the Fitbit (no relation to TidBITS, as you can tell by the capitalization) that track your fitness, what you eat, and even how well you sleep. The free Lumosity app brings the same concept to your brain via the iPhone and iPad.

Few people would argue against becoming a bit smarter, which is what Lumosity aims to help us do. The company was founded in 2005 for neuroscience research and development of brain training technologies. The result is a Web and iOS app whose goal is to enable you to train your brain. While the app has been available on iPhone since 2010, it was recently updated with a flat design and a new iPad version.

When you first launch Lumosity, you must create a login for Lumosity.com, if you haven’t already. You’ll then be asked a series of questions to personalize your training regimen. “Would you like to remember people’s names?” Yes, I’m awful at that! “Would you like to keep track of multiple ideas?” Well, we have Trello for that, but sure! “Would you like to make better decisions under stress?” My wife could go into labor at any moment, so absolutely! 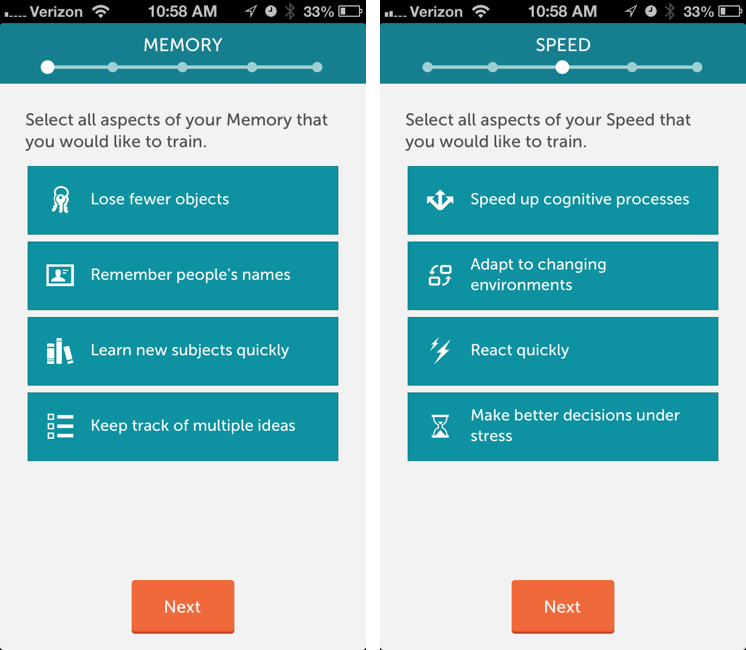 Lumosity takes your input and develops a daily training program, which it recommends that you go through 3–5 days a week. Without a $79.99 annual subscription, you’re restricted to a limited set of tests per day, which are rotated every day. However, it doesn’t seem to interfere with daily training. The subscription also unlocks other nice features, like tracking your progress over time and the capability to compare your scores against other players.

Each test comprises a series of timed challenges, the goal being to complete as many as possible. There’s Speed Match, which presents a series of colored shapes, and, for each one, you have to decide if it’s identical or different from the last. In Color Match, you’re presented with two words, each a color, and you have to decide if the word on top matches the text color of the bottom word. Chalkboard Challenge presents you with two numbers or math formulas, and you have to decide which is larger, or if they’re equal. Many other games are available — both within the iOS app and on the Web site. 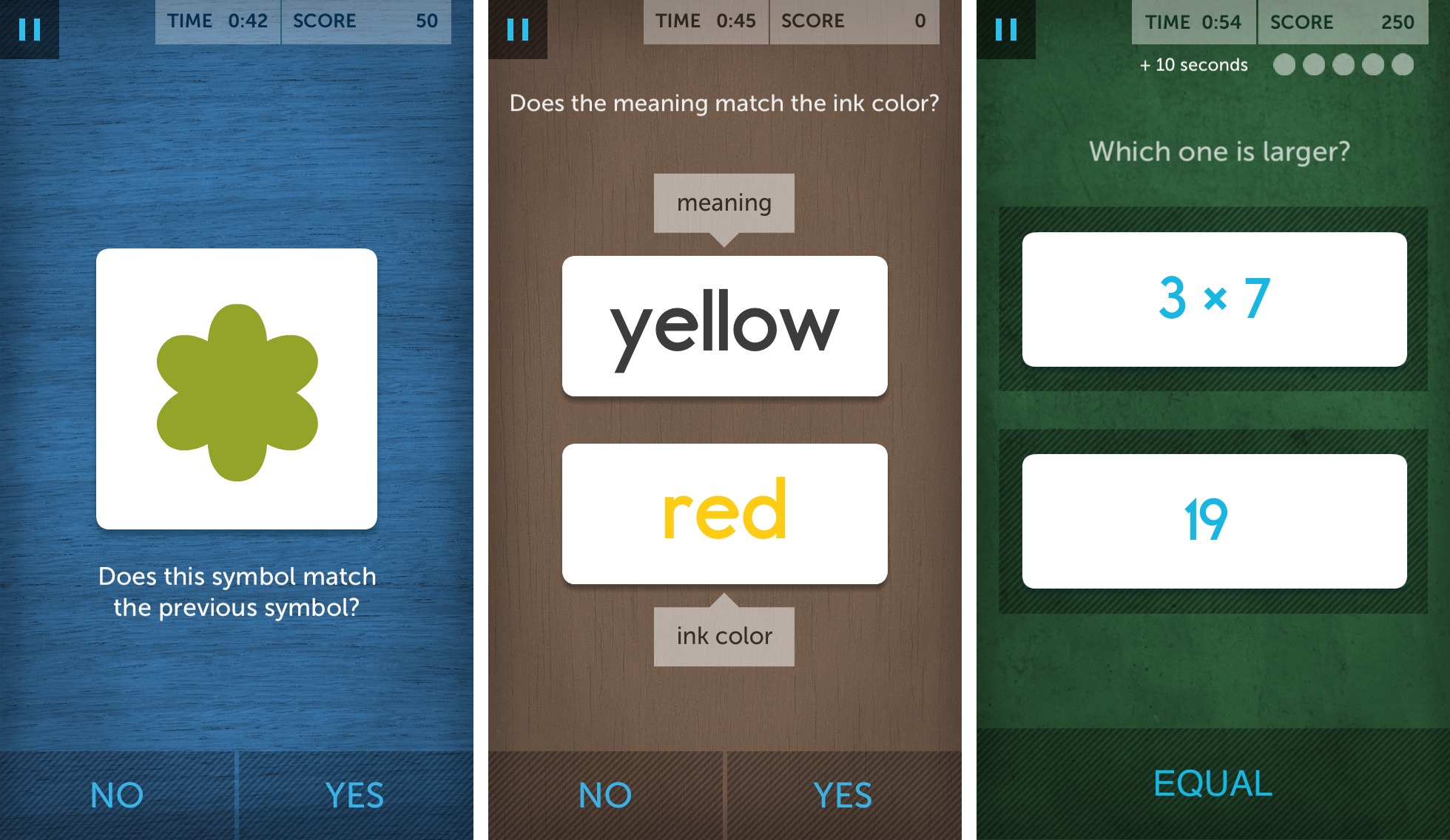 After completing each test, you’re given a score, which is used to calculate your Brain Performance Index (BPI), an overall assessment of brain performance. Paid subscribers can track their BPI over time, or compare against other users. 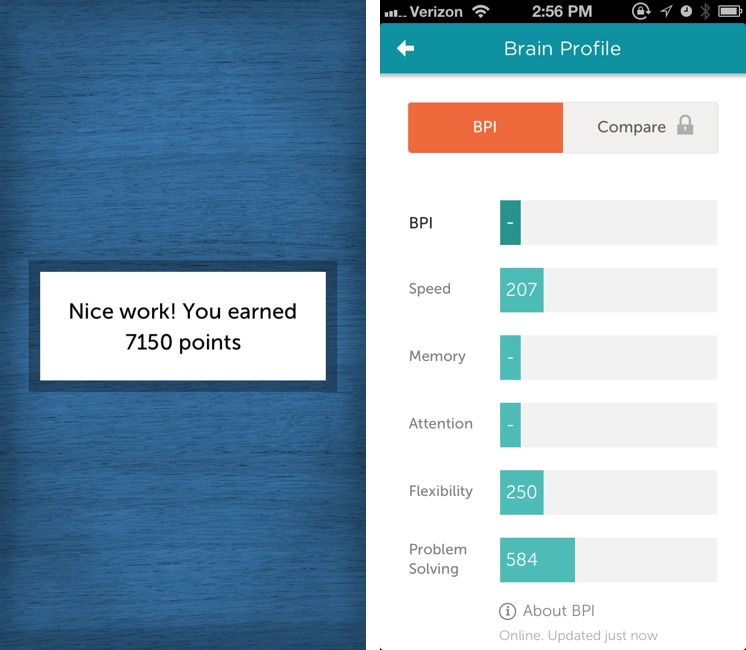 Training takes only a few minutes, and you can set alerts to remind you of specific days and times to train. The app also tracks which days you’ve trained, so it’s easy to keep up with the schedule. The entire app is well designed, with a friendly interface, bright colors, and tasteful fonts. 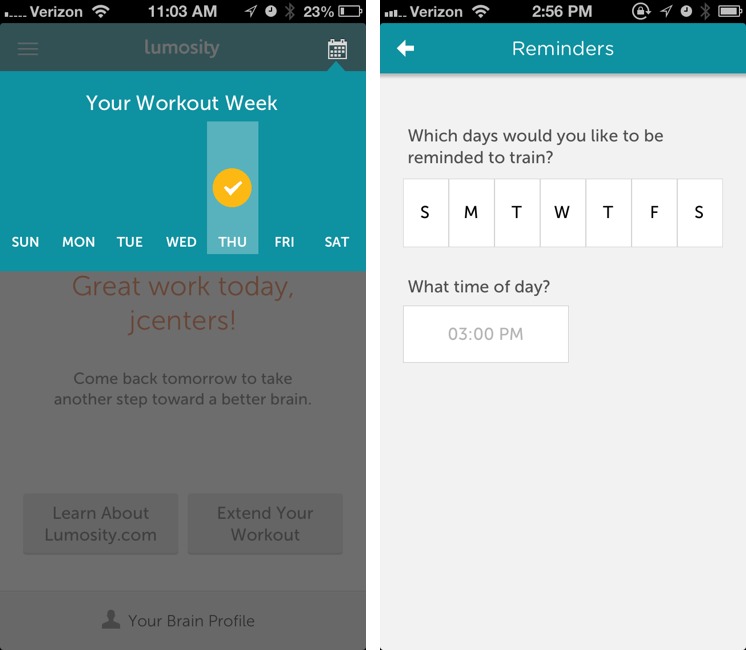 The games themselves are fun, but can they actually make you smarter, as Lumosity claims? The company says it works with researchers from Columbia University and the University of California, Berkley, and its Web site links to a number of peer-reviewed papers. Plus, Lumosity has founded the Human Cognition Project, an ambitious effort to work with scientists, doctors, and teachers to advance neuroscience.

However, the science is still murky, despite numerous studies. David Z. Hambrick, associate professor of psychology at Michigan State University told SmartPlanet “There’s been all this focus on brain training and cognitive training. But there is not convincing evidence to support the claim by Lumosity and other companies that these programs have far-reaching beneficial effects on cognitive functioning.”

In fact, the evidence seems to indicate that these games make you better only at the game itself, not at broader cognitive function. Neuroscientist Dr. Adrian Owen performed a test of 11,000 subjects over 6 weeks and determined that while the subjects improved at the specific tasks the test game presented, they did not seem to improve in other areas.

Still, while it’s inconclusive that these games can actively make you more intelligent, there’s no indication that they do any harm. And many of the games included in Lumosity are some of the same tasks we assign to schoolchildren, such as shape matching and arithmetic repetition. If these methods don’t work, then perhaps we have bigger problems than we realized.

But what about improvements in specific populations? Some studies, such as one from the University of Iowa’s Federic Wolinsky, have shown that brain training games can slow mental decay in older people. On the other hand, according to an article by Jessika I. V. Buitenweg, Jaap M. J. Murre, and K. Richard Ridderinkhof in Frontiers of Human Neuroscience, results of such studies “are neither robust nor consistent,” and they suggest a series of elements that may offer more successful outcomes.

I’d also love to see more career-specific games. How about a game where you’re presented with a paragraph or sentence and you have to find the typo or grammatical mistake? That could help me a lot. Or maybe a similar game for programmers, where you have to spot the error. Perhaps if these games were more specific and less general, they’d be of greater utility.

All that being said, Lumosity is fun and might possibly make you a bit sharper. It’s certainly worth a download, though I won’t be spending $79.99 per year for full access. Nor do I think most people will, despite the game’s popularity. The free daily content should be sufficient to keep most players satisfied, at least until solid data showing mental improvements should appear.

Comments About FunBITS: Train Your Brain with Lumosity