Following on the heels of Instacast, the popular iOS podcast client Downcast from Jamawkinaw Enterprises is now available on the Mac for $9.99. While Downcast was my original pick for podcast listening on the iPhone (see “Five Alternatives to Apple’s Podcasts App,” 22 December 2012), Instacast’s excellent Mac app eventually won me over, thanks to its syncing capabilities (see “Instacast for Mac Fills the Desktop Podcatcher Gap,” 31 May 2013). Will Downcast for Mac be able to win back my affections? 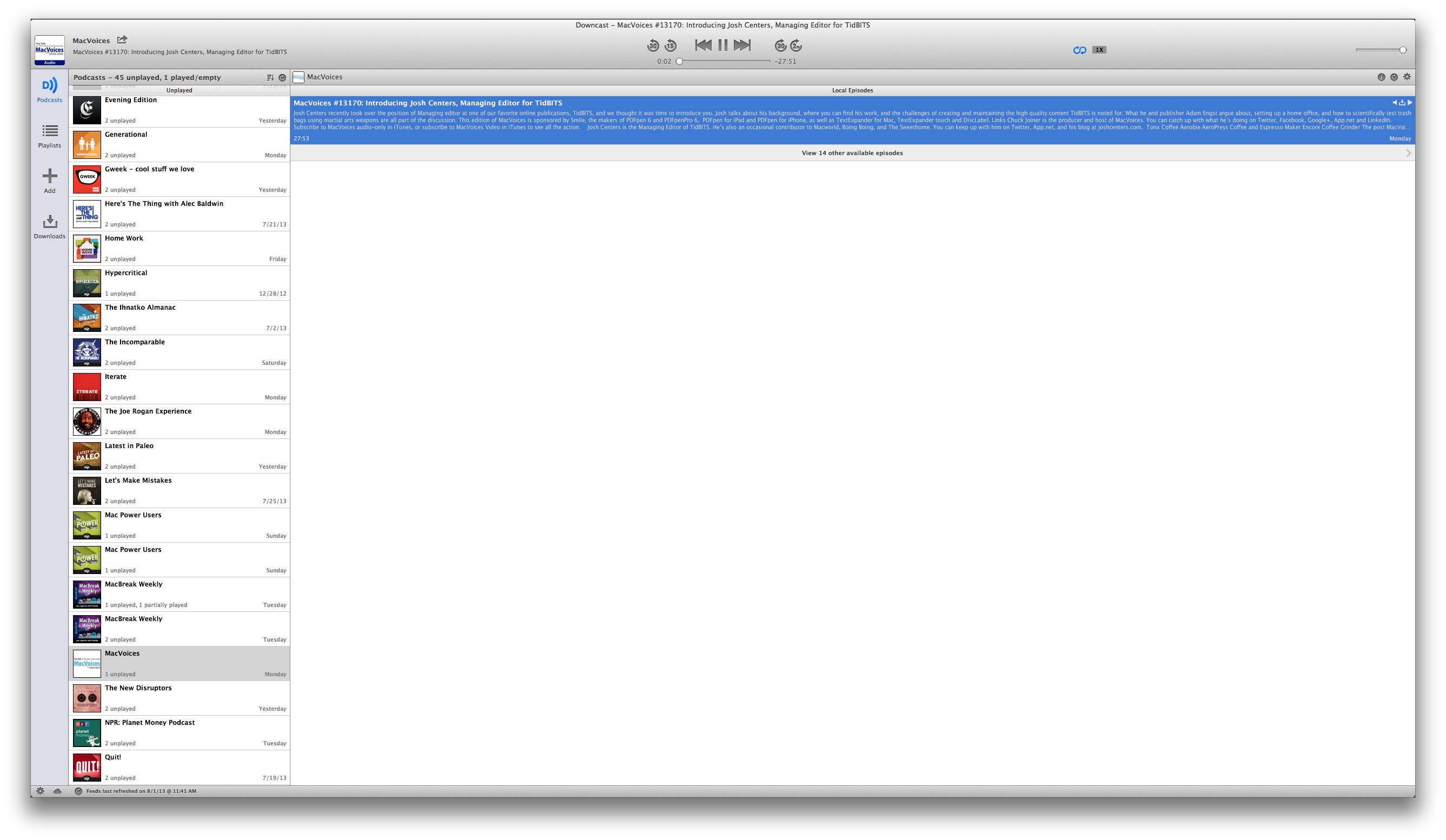 Fans of Downcast will be pleased to see many of their favorite features in the Mac version, especially the multiple skip options. As in Downcast for iOS, you can skip back 30 or 15 seconds, or skip forward 30 seconds or 2 minutes. The 2-minute skip is particularly nice for long podcast advertisements.

But the most important thing about these apps is how well they sync with their iOS brethren. If I just wanted to listen on my Mac, then iTunes, which inexplicably doesn’t sync with Apple’s own Podcasts app over iCloud, would do just fine. While syncing between Downcast’s versions was initially very spotty, after an update to the iOS client, it seems to work pretty well, though you have to wait a few seconds after pausing either app for the sync to occur.

Downcast has some nice advantages over Instacast. Instacast stubbornly tries to use the Mac’s media keys to control playback, which leads to all kinds of problems. A bug in OS X 10.8 Mountain Lion means that you have to enable the Gatekeeper security feature in order to control Instacast playback from the keyboard (which, to be fair, isn’t a major liability — for most people, Gatekeeper should be enabled). Even when enabled, using media keys to control Instacast is spotty — sometimes it works and sometimes it launches iTunes by mistake. Downcast ignores the Mac’s media keys entirely. Instead, you can play or pause a podcast in the app by hitting the Space bar, and skip forward or back 30 seconds by pressing Command and either
the right or left arrow key. When Downcast isn’t in the foreground, you can play or pause with the F8 key, skip 30 seconds back with the F7 key, and skip 30 seconds forward with the F9 key. Downcast has a clear advantage over Instacast when it comes to keyboard control.

Like its iOS counterpart, Downcast for Mac features powerful playlist creation tools. You can create smart playlists to include as many or as few episodes as you wish, and include or exclude video podcasts, downloaded podcasts, partially played podcasts, and all-new podcasts. While this feature is a bit overwhelming on an iPhone, it’s phenomenal in the Mac version. By comparison, Instacast offers only a handful of fixed playlist options. 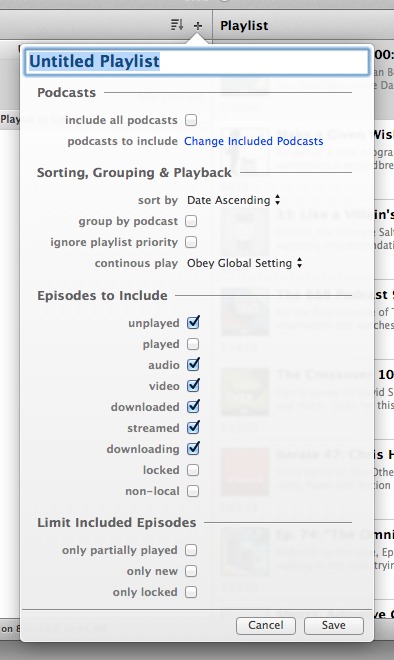 Despite those niceties, Downcast doesn’t yet match up to Instacast’s level of refinement. Instacast, even in beta, was supremely polished, and worked smoothly and reliably. However, as I sit here playing with Downcast, I switched from one podcast to another, then switched back again, and Downcast lost my place, which is a pretty serious bug. (I’ve seen this bug on several occasions, though efforts to reproduce it intentionally have failed.) The CEO of Jamawkinaw Enterprises, Seth McFarland, told me that
the 1.0 release has a number of known bugs that they’re working on fixing soon.

The interface could also use a bit of polish. I’m no designer, but something about the forward and skip buttons feels off to me. They don’t seem to fit with the rest of the app. Also, some of the buttons are spread out in the window in odd places. The playback speed and repeat buttons kind of float off into space, and the share button is also off by itself, near the podcast title.

Additionally, Downcast doesn’t support AirPlay out of the box, unlike Instacast, so if you want to AirPlay content, you’ll have to resort to a utility like Rogue Amoeba’s Airfoil. Also, Downcast has fewer sharing options than Instacast, lacking the capability to send show notes to Instacast or Pocket, and to share episodes via App.net. However, unlike Instacast, it can share episodes over AirDrop or share to Facebook. I seldom use these features, but they’re nice to have.

Instacast’s greatest advantage over Downcast is perhaps its automatic podcast management. In Instacast, you merely specify how much hard drive space you’re willing to give up, and the app takes care of the rest. In contrast, Downcast’s automatic management options are episode-based, which isn’t nearly as helpful because you must manually estimate how much space each podcast will occupy. The point of automatic management is to keep the device from filling up, and Instacast gets right to the point.

On the plus side again, at $9.99, Downcast’s price tag is half of Instacast’s $19.99. Not only that, but you’ll pay even more for the Instacast iOS apps. Downcast for iOS runs $1.99 in the App Store, while Instacast costs $4.99, and Vemedio has already said that the next version, which is being redesigned for iOS 7, will require another new purchase.

Despite the price difference, I’m sticking with my recommendation of Instacast for now, because it enables listening to podcasts on multiple Apple devices with as few headaches as possible and is more polished on both Mac OS X and iOS. However, with some additional refinement and fixes for its 1.0 bugs, I could see Downcast winning me back. Stay tuned to TidBITS as the Saga of Josh’s Podcast Obsession continues…

Comments About Downcast Comes to Mac, but Lacks Instacast’s Polish