Back in the late 1980s, Apple’s CEO, John Sculley, had a vision he described as the Knowledge Navigator, a 21st century digital assistant that would, through magical feats of artificial intelligence and access to not-yet-extant publicly available networked databases, deliver your news, schedule your appointments, answer your questions, and, perhaps, make your hair silky and shiny. The first tangible fruits of that vision emerged at the Consumer Electronics Show in June 1992, when Apple unveiled Newton — its first new product line since the Mac’s debut in 1984.

After over a year of anticipation, the first Newton device, the MessagePad 100, went on sale at the Macworld Expo in Boston in 1993. To get a feel for what the anticipation was like, see Mark H. Anbinder’s “Waiting for Newton,” 14 June 1993. Also, check out some first impressions from our anonymous tipster Pythaeus in “Newton Notes,” 2 August 1993.

Weighing slightly less than a pound (0.45 kg), with a 336 by 240 pixel black-and-white screen and 640 KB of RAM, the MessagePad 100 sported a stylus instead of a keyboard and offered handwriting recognition as its sole method of input. It attracted huge amounts of attention as the first of a new category of computing devices, the personal digital assistant, or PDA. With it, one could compose notes, store contact and calendar information, and perform calculations and conversions. One could even link it, via a serial cable, to a Mac and synchronize information between the two devices.

It cannot be overstated how important the Newton was to Apple. The stakes were so high that a young programmer took his own life under the pressure. Profit margins were shrinking, and it didn’t help that many Apple veterans were suspicious of the project. Housed in a secret warehouse filled with a young, rebellious team, the Newton project resembled the pirate ship that gave birth to the Macintosh, the product that eventually supplanted both the Apple II and the Apple Lisa. Sculley’s legacy, people’s jobs, and even Apple itself were on the line. As Adam Engst stated days after launch, “The Newton must succeed.” In the days before the second coming of Jobs, the
Newton was Apple’s only hope for the future (see “Newton Arrives,” 9 August 1993).

But despite all the hard work, hype, and pressure, the MessagePad’s most high-profile feature, its handwriting recognition, while remarkably good for the first commercial iteration of the technology, was far from perfect, and it could commit some egregious blunders. In fact, the fate of the product line may well have been sealed by that imperfection, which Garry Trudeau mocked in several Doonesbury comic strips produced soon after the MessagePad introduction — strips which introduced the phrase “egg freckles” to the annals of technology mockery. The Simpsons followed
suit, with a school bully writing, “Beat up Martin,” only to see it transcribed as “Eat up Martha.”

In addition to the flaws in its handwriting recognition, the MessagePad was, ironically, less than suitable for delivering and receiving messages. It emerged without a modem into a world where the screeching beasts remained the most common method of accessing the Internet and, with it, email, and where Wi-Fi technology (which the device, of course, lacked) was still in the labs. The only ways to send messages from it were to sync the device with a Mac and then send the messages from there, or to use the MessagePad’s built-in infrared capabilities to beam messages to a nearby MessagePad.

Within months of the MessagePad’s introduction, Sculley and Apple had parted ways. Sculley went on to a disastrous relationship with the company Spectrum, one of the original patent trolls (see “Sculley’s New Job,” 25 October 1993). Nonetheless, Apple continued to work on improving both the Newton’s hardware and the software over the next several years. The Newton’s handwriting recognition was soon perfected, but alas, it was too little, too late.

Although I never owned an original MessagePad 100, I was intrigued by its capabilities after playing with a friend’s, and, after several iterations of the product I eventually did purchase the penultimate version of the device, the MessagePad 2000, at a cost that was roughly equivalent to the price of one of today’s low-end MacBooks. I was both impressed and disappointed by it. 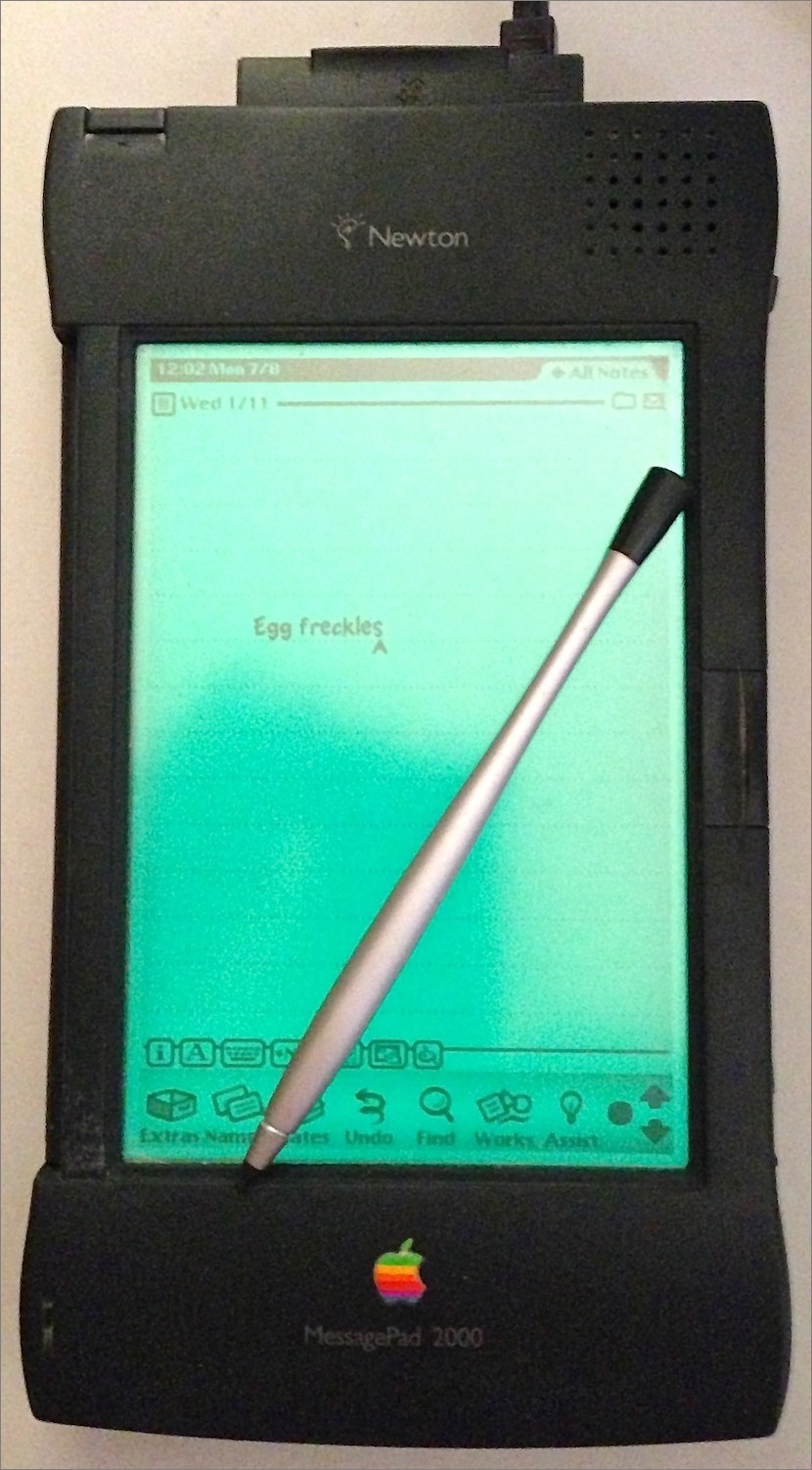 What impressed me were the improvements in handwriting recognition, the larger and now backlit screen, the applications that had begun to be produced for it, including a rather sophisticated word processor, and the hardware add-ons, such as an actual keyboard and slots for PCMCIA cards, one of which I populated with a modem card that enabled me to access email while on the road. 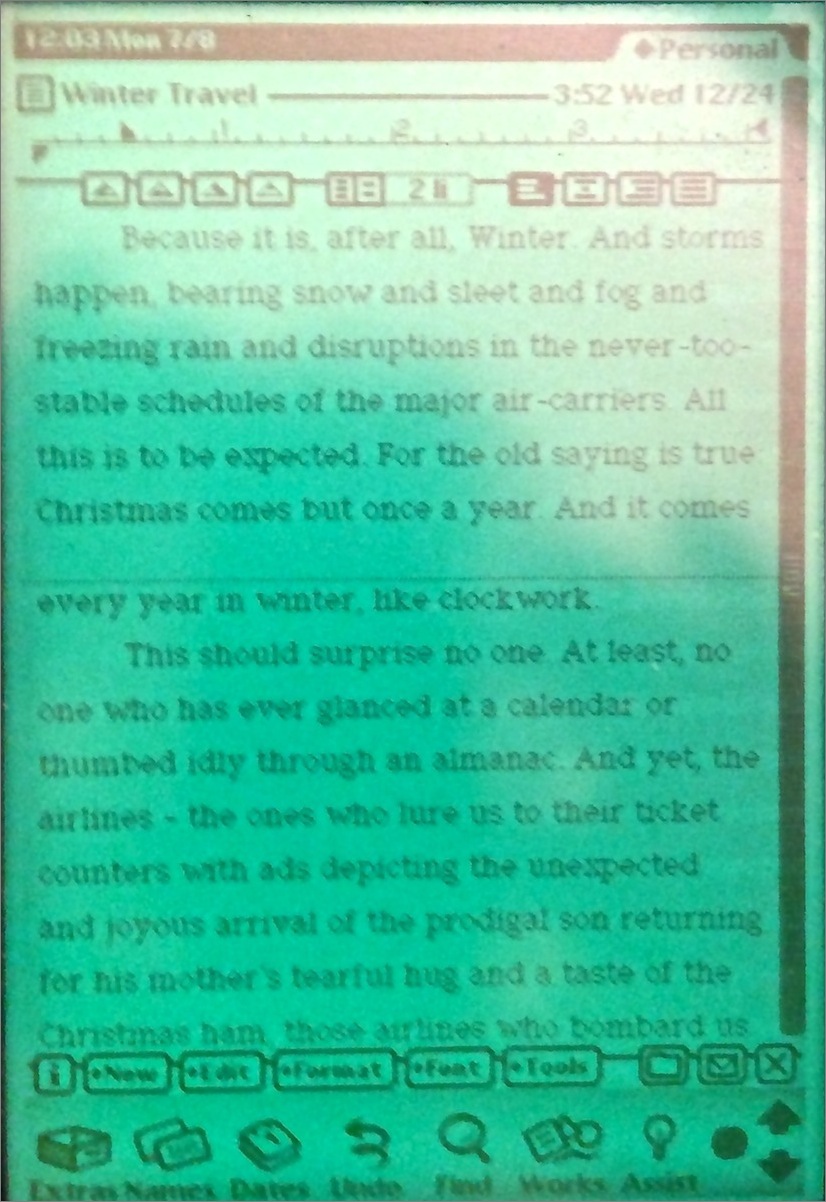 What disappointed me were the device’s basic limitations and general clunkiness: the larger screen was still inadequate for intensive word processing, the modem was haphazard and unreliable, the battery life (it ran on four AA batteries) was mediocre, and the hoops one had to jump through to transfer information to the Mac (connect the cable to the Mac, fire up the Newton Connection Kit software, and, maybe, if the wind was blowing to the southwest, avoid a Mac system crash so one could laboriously move files from the
Newton to the Mac) all combined to make using it less than the pleasure I wanted it to be.

Nonetheless I did manage to do some productive work with it, including, for example, conducting an impromptu afternoon interview in a park with an award-winning film editor, armed only with my Newton and keyboard. And it became my regular companion when I had to attend meetings and take notes, even though it made me the object of some good-natured ribbing.

By May 1997, with Steve Jobs back at Apple, the Newton platform was spun off to a separate Apple-owned subsidiary, Newton Inc.; by September, its fate was sealed, when the closure of Newton Inc. was announced. In all, Newton had only four years in the sun – barely enough time to get a tan (or even to develop egg freckles). (To see our original news item of the Newton’s death, see “Newton Falls from Apple’s Tree,” 27 February 1998.)

So the project that “must succeed” not only failed, but was strangled to death by a ruthlessly energized Steve Jobs. But, despite that, the Newton is perhaps the most successful flop of all time. Although Jobs was looking at touchscreen technology in the early 1980s, it was John Sculley who dreamed up the Knowledge Navigator, and made the idea of a flat, portable, touchscreen-based computing and communications device a commercial reality. The Newton inspired the PalmPilot, which was less ambitious but more successful. Palm’s work inspired Windows Mobile, and the idea finally evolved into the iPhone and iPad we love today. In the end, the product that had to save Apple led to the product that made Apple the richest technology
company in the world.

And so, while Adam Engst may have been wrong about Apple’s need for the Newton to succeed (it turned out that what Apple needed more at that point was the return of Steve Jobs), try replacing “Newton” with “iPhone” in the following paragraph from that 1993 article.

So again, the Newton must succeed. Not only for Apple, but also for us. No other computer company has shown the guts necessary to introduce such a radically new technology in such a big way. Without Apple and the Newton we would be stuck with DOS-compatible palmtops, constantly shrinking in size and remaining as stupid as ever. I’m the last person to pretend that Apple has all the answers, but I’ve never seen another company willing to drop the old and the obsolete along the wayside to keep progress rolling. And all that even if it annoys some customers. I realize this sounds like the egomania of Steve Jobs, but some things must be done because they will change the world, because they are the right thing to do. Apple must
now convince the world that the Newton is the right thing to do, that the Newton will change the world. So easy to say, so hard to do.

The Newton’s only fault was that it was too far ahead of its time. It suffered from more imagination than the technology of the 1990s could support. Even now, we’re still catching up. Its perfected handwriting recognition lives on in the seldom-touted Ink feature in Mac OS X. The “poof” you see when you drag an icon off Mac OS X’s Dock? That came straight from the Newton. And even Newton’s tag-based “soup” filesystem has echoes in the Finder tagging we’ll see making a comeback in OS X 10.9 Mavericks.

Although the Newton failed, the concepts behind it changed the world forever. As much as we might want to look back on it and snicker about “egg freckles” and “Eat up Martha,” it was a technological marvel that we’re still trying to perfect. And while Apple probably wishes you would forget the Newton, the company is still looking back to it for “new” ideas. Today, years after Apple sent Newton to the land of forgotten tech, it still keeps the old trademark around. Maybe, just maybe, Newton will rise again.

Comments About Newton: The Greatest Flop of All Time