Gameloft has long been an App Store mainstay, perhaps best known for its knockoffs of popular gaming franchises for iOS. Activision has Call of Duty: Modern Warfare; Gameloft has Modern Combat. Rockstar has Grand Theft Auto; Gameloft has Gangstar. Microsoft produces Halo; Gameloft turns it into N.O.V.A. You get the idea. It’s The Asylum — makers of such movie classics as “Snakes on a Train” and “Transmorphers” — of iOS gaming.

But the thing is, Gameloft does an excellent job with these knockoffs. So good, in fact, that other companies hire Gameloft to make official games, like Iron Man 3, NFL Pro 2014, and Ice Age Village. In fact, I’ll even admit to preferring some of Gameloft’s knockoffs over the games they’re based on. I’ve found the campaigns of the N.O.V.A. series to be far more exciting than some Halo games.

Gameloft has been so successful that they decided to get into the hardware business, with the Duo Gamer controller, released in late 2012. The Duo Gamer is a Bluetooth controller for the iPad, but the trick is that it supports only Gameloft games, and only a handful at that. The original asking price? $80. Stop laughing! Cut it out, I’m trying to write here! OK, I’ll just wait…

Needless to say, the Duo Gamer wasn’t a hit. To put things in perspective, an official controller for the Xbox 360 or PlayStation 3 can be had for under $40. With Apple-sanctioned gamepad support coming to iOS 7, Gameloft now wants to pretend the Duo Gamer never existed — you’ll find no mention of the controller on the company’s Web site.

But I did not come here to bury the Duo Gamer, or to spit on its grave. Rather, after Zac Zichy, co-host of The Menu Bar podcast, pointed out that it’s on sale for $6 on Amazon, I said, “Why the heck not?” It’s not much to gamble to see if I can enjoy some of my favorite iOS games more, and if it’s the worst purchase I make all year, it’ll be a vast improvement over when I was in my 20s — an era that spawned great investments like a $300 Renaissance festival samurai sword and a Motorola Droid.

The Duo Gamer comes with the controller, an iPad stand, and two AA batteries. The stand and batteries are worth the price on their own. Despite being made of cheap plastic, the stand is actually decent. It’s a stable base, and the feet secure it well to my desk. It supports the iPad in both landscape and portrait modes, with a hole on the bottom to thread a 30-pin dock or Lightning connector through. It also offers a notch where you can place the controller.

As for the controller itself, it feels incredibly cheap. Cheap as in you might expect to find it in one of those shady knockoff consoles full of pirated NES games at a flea market. And it’s so boxy. The edges aren’t full-on square, like the NES — they’re angled inward so the controller isn’t agonizing to hold. Still, you’re going to deal with sharp edges rubbing against your palms.

The controller is a familiar layout to most gamers. There’s a small D-pad, two analog sticks, four face buttons, two shoulder buttons, and one last button that does double duty for both pause and power.

Setting up the controller is easy. Just turn it on, open the iPad’s Settings app, tap Bluetooth, and select the Duo Gamer. You don’t need to do any additional setup in the games themselves. The few that support the Duo Gamer do so automatically, and quite well.

According to the App Store, which helpfully lists every compatible game for the Duo Gamer, it supports only nine games. For this review, I tested three: the racing game Asphalt 7, first-person shooter N.O.V.A. 3, and MMORPG Order & Chaos Online. These aren’t reviews or endorsements of the games themselves, but rather general impressions of how well the Duo Gamer works with them. 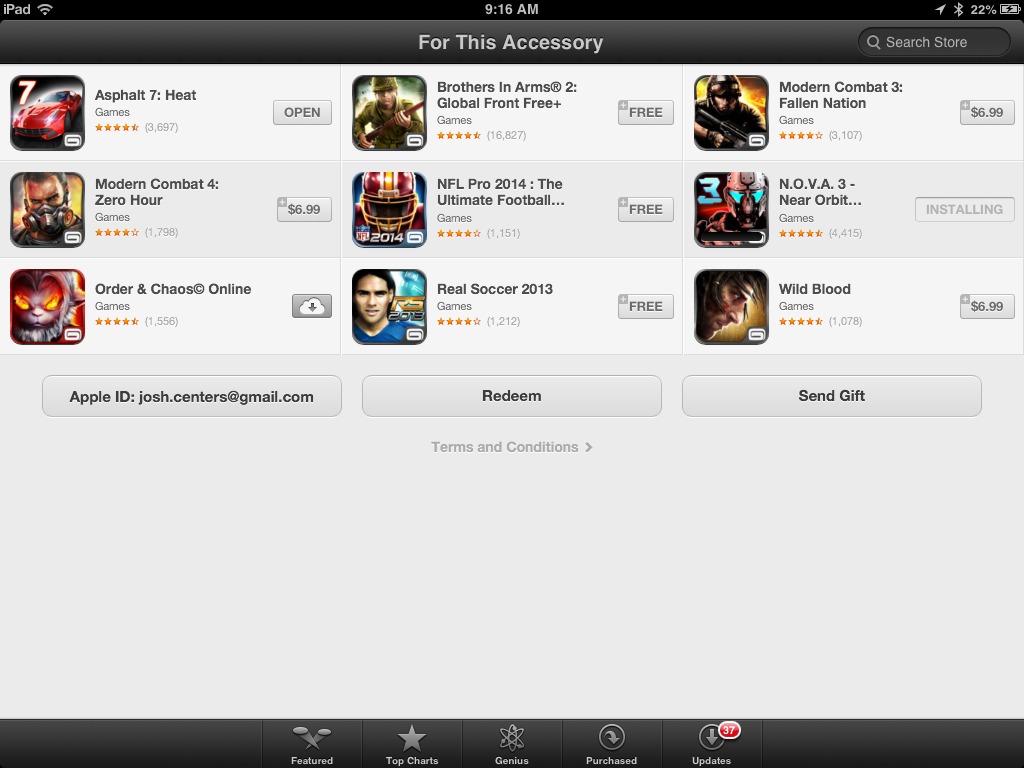 Asphalt 7 — A racing game in the same vein as the Need for Speed series, Asphalt 7 is only $0.99 on the App Store. Most racing games don’t demand much of their controllers — you can technically get away with only a way to steer. 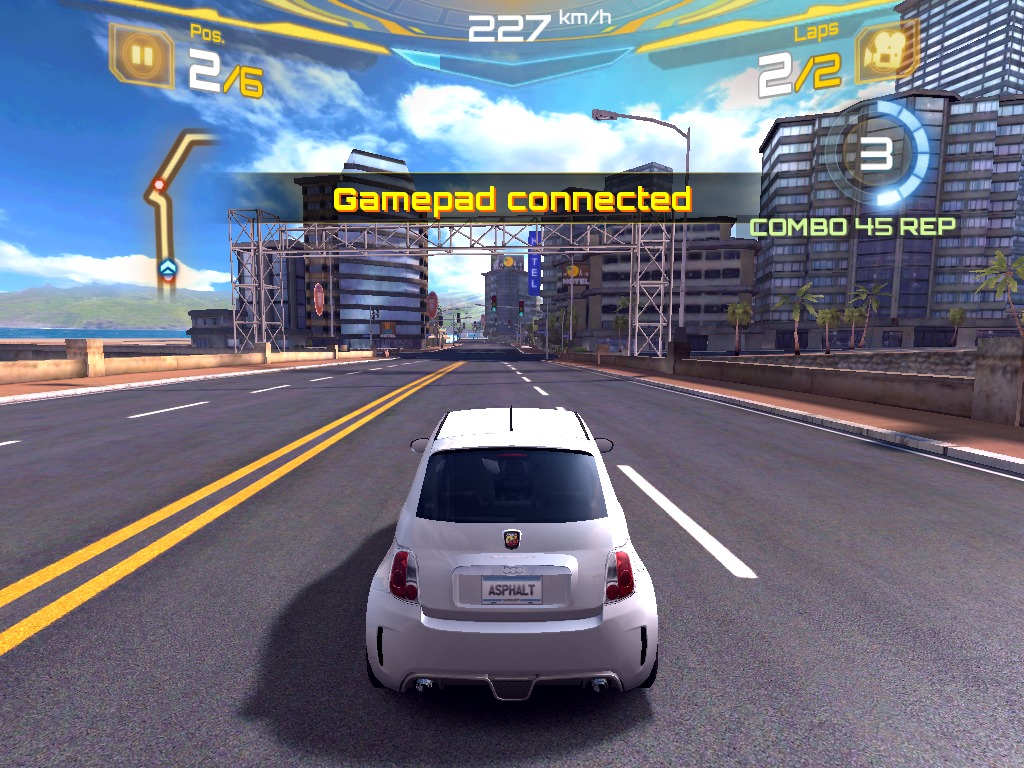 Likewise, Asphalt 7’s controls are simple — there’s steering, acceleration, braking, plus a Nitro boost and camera controls. You can accelerate by holding down the A button or pressing forward on the right analog stick. Brake with the left trigger, by pulling back on the right analog stick, or by tapping the X button. The B button lets you switch camera modes, down on the D-pad lets you look behind the car, and the right trigger activates Nitro. 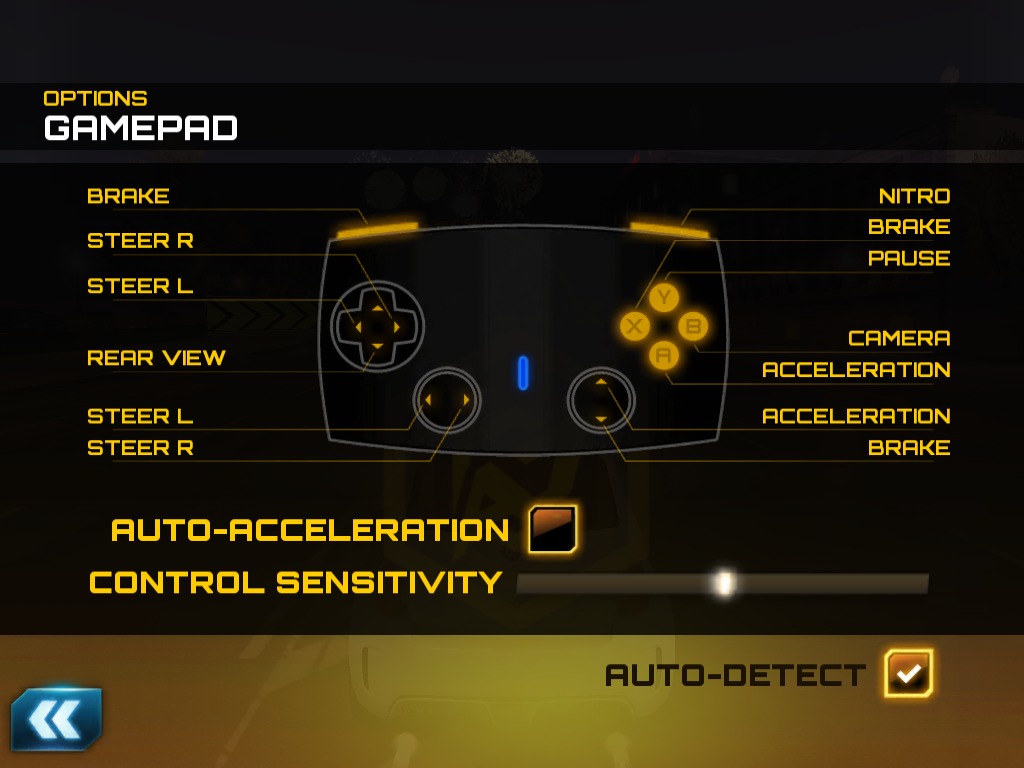 Asphalt 7’s touch and gyroscope controls worked well enough, but the Duo Gamer works even better. Using the right analog stick to control braking and acceleration is great, making it easy to slow down for tight turns. However, there are some menu items that I can’t seem to access with the controller, forcing me to use the touchscreen.

N.O.V.A. 3 — Borrowing heavily from the Halo franchise, the N.O.V.A. series has been a long-time first-person shooter (FPS) favorite on iOS. Despite Gameloft’s relatively excellent controls, playing a FPS with a touchscreen can often be frustrating. N.O.V.A. 3 ($6.99) is where the Duo Gamer truly shines. 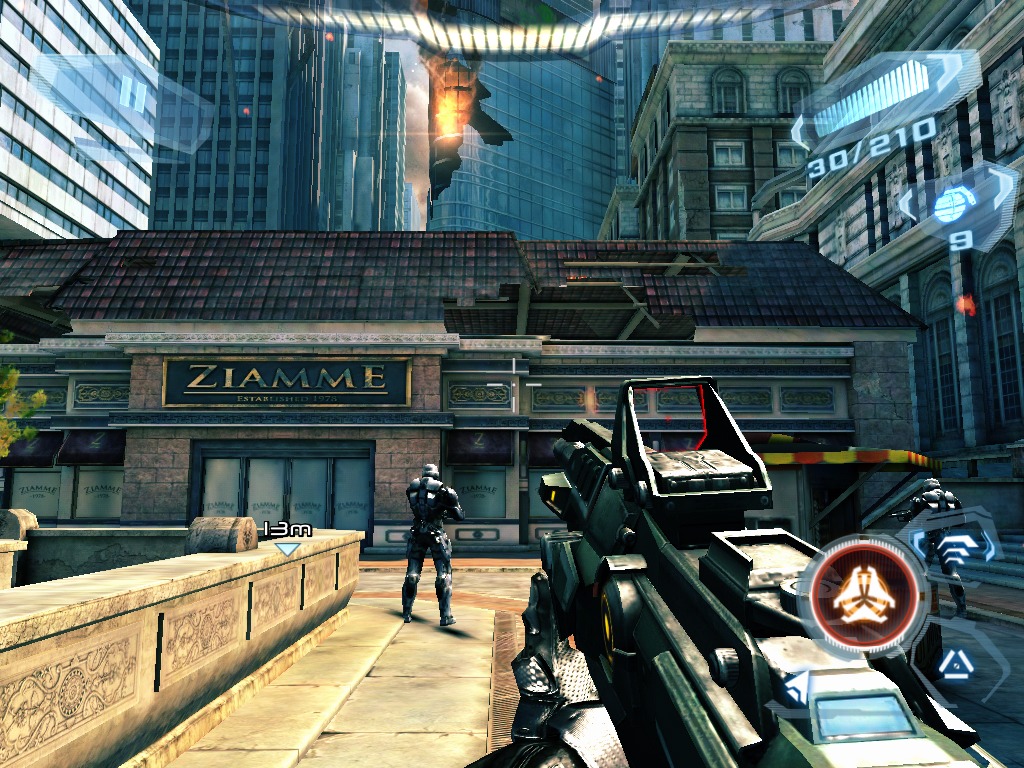 Players who are already used to console FPS controls will feel right at home, as the layout is practically identical. The left analog stick controls movement, the right stick your view, left trigger brings up your gun’s iron sights, and the right trigger shoots. 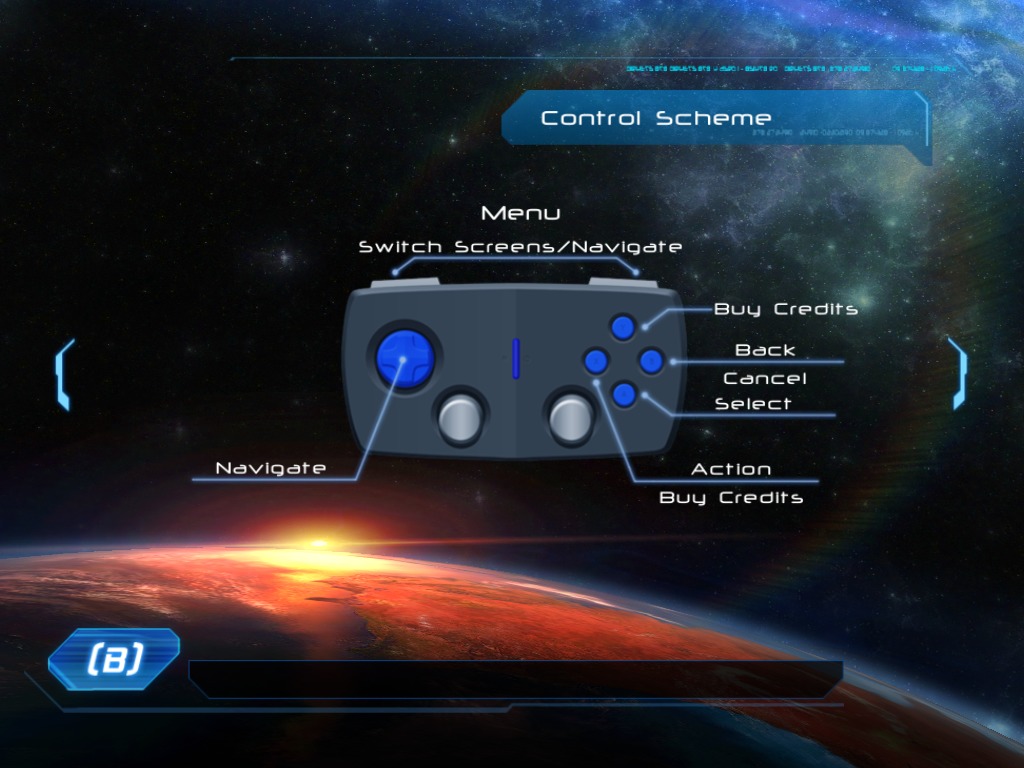 If anything, the Duo Gamer makes N.O.V.A. 3 too easy. In a quick play session, I breezed through the first level of the game in minutes. In multiplayer matches, the Duo Gamer would be like bringing a gun to a knife fight.

If you’re a fan of N.O.V.A. 3, the Duo Gamer is a worthy investment. Unfortunately, it isn’t compatible with the first two titles of the series.

Due to a severe college WoW habit, I try to avoid massively multiplayer online role-playing games (MMORPGs), but I’ve always been impressed with OCO. MMORPGs are a tough genre — hard to get right, and most fail spectacularly. And they are complex! High-level WoW players often have 40 or more action buttons on their screen at any given time. But somehow, Gameloft has made a successful MMORPG that works with the limitations of a small touchscreen. 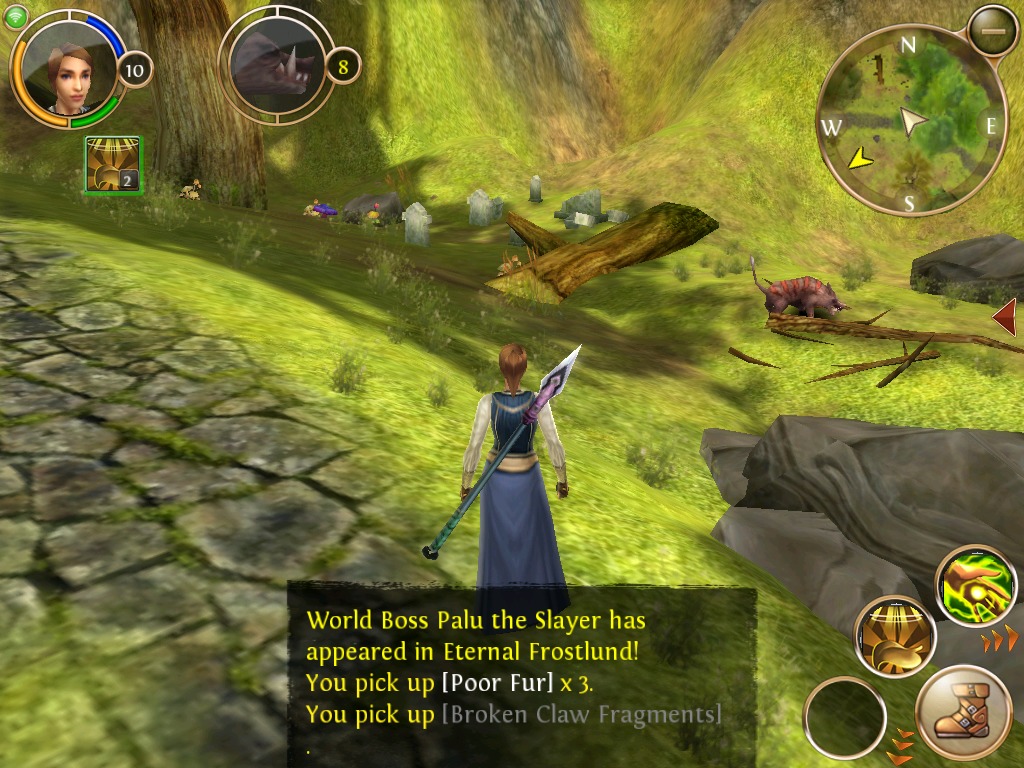 While the Duo Gamer works just fine in OCO, the controls are trickier. As in N.O.V.A. 3, you use the analog sticks for movement. But then things get a bit weird.

The way OCO works around the “screen full of buttons” problem is to limit your action bar to six items — with only three being on screen at a time. With the Duo Gamer, you use the left trigger to flip between the two action bars.

Then comes the problem of selecting a target. When using just the touchscreen, you tap the target you want to interact with. So if you want to attack a goblin, you tap it, then tap an attack power from your action bar. When using the Duo Gamer, you use the right trigger to select and cycle through targets, and it does its best to guess which one you want.

The top three face buttons, X, Y, and B, are used to activate actions in your action bar, while the A button is used to activate the default action — usually talking to NPCs or auto-attacking enemies.

To jump, you press the right analog stick, and pressing the left stick brings up the world map. The D-pad brings up the game menu.

The Duo Gamer’s controls for OCO are strange and take a bit of adaptation. I’d say that it’s better to rely on the touchscreen, but the big advantage of using the Duo Gamer is the stand. While using the controller and stand, I feel more like I’m playing a real video game, plus I save myself the neck strain of staring at an iPad in my lap.

Taking It to the Next Level — One of my hopes with the Duo Gamer was that I could use AirPlay to display the games on my Apple TV to create a console-quality gaming experience with my iPad. Unfortunately, that didn’t pan out.

The first game I tried was N.O.V.A. 3. It worked, but it was unplayably laggy. Most games I’ve tried over AirPlay work great (such as “FunBITS: Sky Gamblers: Storm Raiders for iOS and Mac,” 28 June 2013). I’m not sure if it’s a software issue, or if my iPad 2 is just getting long in the tooth — N.O.V.A. 3 is a graphically demanding game.

Order & Chaos Online doesn’t technically support AirPlay, but AirPlay mirroring will still display the game on your TV, just at the iPad’s 4:3 ratio instead of a full 16:9. However, I didn’t notice any lag.

As for Asphalt 7, it just doesn’t work. It technically supports AirPlay, but crashes as soon as I enter a race. Boo.

A Taste of Things to Come — If Gameloft is The Asylum of gaming companies, then the Duo Gamer is the Sharknado of iPad accessories. The idea is awesome, and even if the execution is terrible, I still kind of like it.

Even with its flaws, putting my iPad in the stand and playing games with a controller is a great experience — one I hope I get to enjoy with even more games after iOS 7 is released.

The Duo Gamer is a bold experiment gone wrong: the price was outrageous, the compatibility limited, and the controller’s boxy design uncomfortable. But with gamepad support coming to iOS 7, it gives a taste of what’s in store for us. Hopefully, Apple’s partners will have learned from Gameloft’s mistakes.

And as I said above, even if you don’t care for the gamepad functionality, the included stand is quite good. I like it better than any of the others I’ve tried, and at $6, it’s a good price for just a stand. Just add a Bluetooth keyboard and you’re ready to work.

Some of my friends have made the comment that cheap isn’t a feature. I agree — but it’s a heck of a benefit. If I had spent $80 on this thing, I wouldn’t be writing about it right now. Instead, I would be taping up the box to send it back to Amazon. But for the ridiculously low price of $6, I’ve had a lot more fun than I thought I would — and got a great iPad stand to boot.