It’s a scary time to be an American. After the revelations of ██████ ███████, we know that our post-9/11 security state is out of ███████. The ███ is spying on all of us, backed by a secret █████ that’s headed by none other than the Chief Justice of the Supreme Court. Congress seems too frightened to discuss it, much less take action. Our president seemingly wants to try to make
us feel better about it, despite new ██████ reported regularly. And on top of it all, the review board set up to reform the NSA is packed with intelligence insiders.

On the bright side, developers Neven Mrgan and James Moore have taken advantage of the situation to create an innovative new word puzzle called Blackbar. The game costs $2.99 in the App Store and is universal for both iPhone and iPad.

The best way to describe Blackbar is that it’s an ongoing crossword puzzle with a dystopian storyline. The game consists of a series of messages exchanged between Vi and her best friend, Kenty. Kenty has just taken a job with the Department of Communication. She’s in trouble, but doesn’t know it yet. 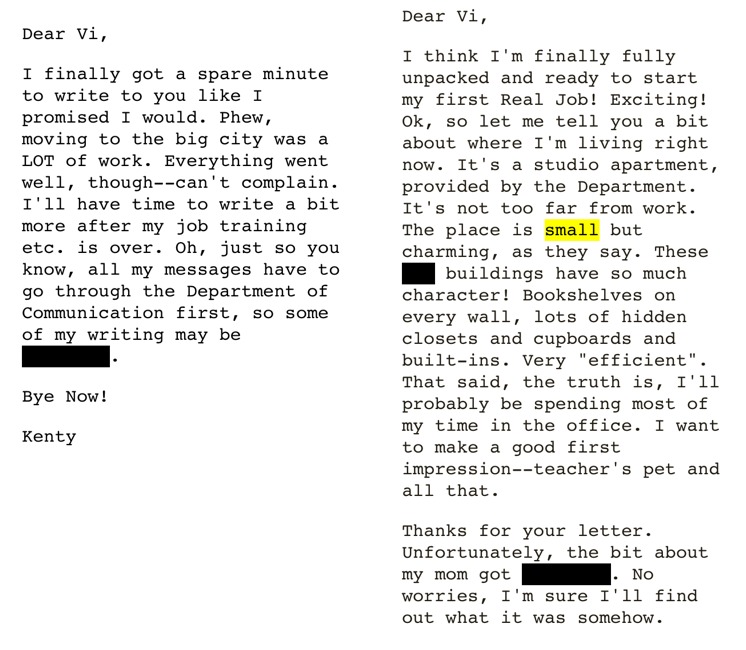 Parts of the letters Kenty sends to Vi are redacted by the Department, and you have to fill in the blanks using context clues and guesswork. As the story unfolds, you’ll have to work out coded messages and even math puzzles to decipher what Kenty is saying. Fair warning: Kenty gets pretty frustrated at some points, and you’ll have to decode some foul language.

In the story, you’ll also be contacted by a number of third parties — warnings from the Department, advisories from Your Neighborhood Board, and a mysterious “friend” who signs letters with only a patriarchal cross. These last messages can be particularly tough to decode, since your “friend” deliberately misspells words. 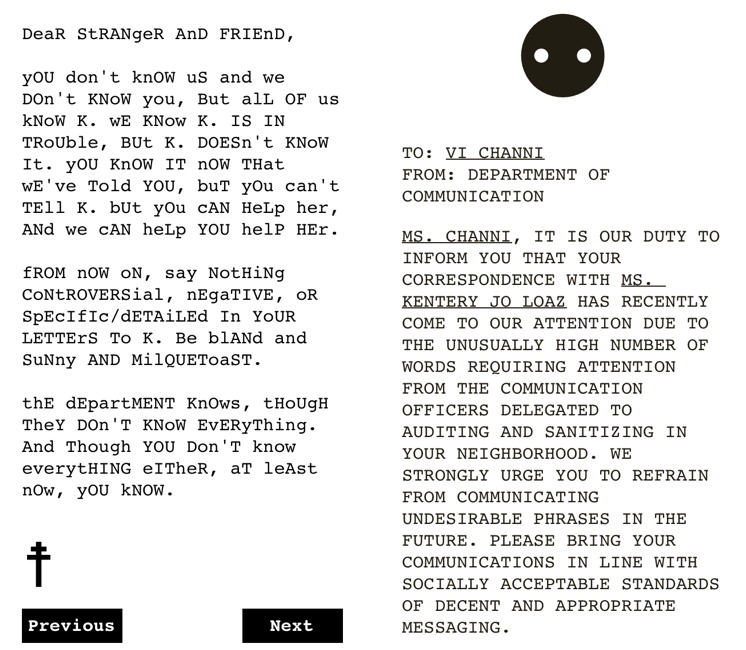 There are contextual clues in the text of the messages, and you can flip back to earlier messages for additional clues, but sometimes it just isn’t enough. If I had one feature request, it would be some way to get extra hints in the game, without resorting to a cheat guide.

I like the style of the game, which has a retro feel. The messages look typewritten, with black Courier text on a white background. When you successfully figure out what a word is supposed to be, it’s highlighted in yellow. Plain black graphics add to the look.

So if you’re looking for a challenging puzzler that makes a unique statement, check out Blackbar. And if you’re worried about maintaining your ███████ (and you should be!), then check out Joe Kissell’s latest Take Control book: “Take Control of Your Online ███████.”

MR. CENTERS, OUR COMMUNICATIONS OFFICERS DETECTED AN ATTEMPT AT LINKING TO INAPPROPRIATE MATERIALS IN THIS ARTICLE. FOR YOUR SAFETY AND CONVENIENCE, WE HAVE SANITIZED THE ARTICLE TO THE BEST OF OUR ABILITY. YOU ARE WELCOME.

PLEASE REFRAIN FROM PUBLISHING UNSUITABLE COMMUNICATIONS IN THE FUTURE.