Apple last week announced the iPhone 5s in three colors: gold, silver, and “space gray.” No pre-order availability was announced for the 5s, unlike the simultaneously announced iPhone 5c (see “Apple Announces Low-Cost Plastic iPhone 5c, in Five Colors,” 10 September 2013), but the phone itself will be available on 20 September 2013 in the United States, Australia, Canada, China, France, Germany, Japan, Singapore, and the UK to start, with 100 countries and over 270 carriers included by December 2013. The iPhone 5s lineup and pricing remain similar to previous models, with a 16 GB model for $199, a 32 GB model for $299, and a 64 GB model for $399 (all with, of course, the obligatory two-year contract).

The iPhone 5s is a notable upgrade over last year’s iPhone 5, with identical casing but a number of significant internal improvements. It features Apple’s new A7 system-on-a-chip, with up to 56 times more graphics performance than the original iPhone. The A7 is also the first, and so far only, 64-bit CPU architecture for mobile phones. iOS 7 and its included apps have been re-engineered for 64-bit support, and Apple’s development platform, Xcode, has been updated to enable developers to develop both 32- and 64-bit versions of their apps simultaneously.

Also new is Apple’s M7 motion coprocessor. The M7 chip takes measurements from the accelerometer, compass, and gyroscope without waking the A7, presumably offering better battery life for motion-sensing apps, like fitness trackers. Apple is integrating M7 support into its Core Motion API, and Nike is already developing an app, called Nike+ Move, that uses the updated API.

Speaking of battery life, the iPhone 5s purportedly can provide 10 hours of 3G talk time (up from 8 on the iPhone 5), 10 hours of browsing over Wi-Fi, 40 hours of life when playing music, and 250 hours (up from 225) of charge on standby.

The camera system in the iPhone 5s also features significant improvements, including a 15 percent larger sensor with larger pixels to provide better color and less noise, an f/2.2 aperture (the iPhone 5 featured an f/2.4 sensor) for better low-light pictures, and a new five-element Apple-designed lens. Also new is the “True Tone” flash, which features two LEDs, one cooler and one warmer, that can be mixed for better skin tones. The camera features an image-stabilization feature that combines multiple shots to produce a sharp photo. It also boasts a burst mode at 10 frames per second, 28-megapixel panoramas, and 120-frames-per-second slow-motion video at 720p. You can even take a still photo while shooting video.

The camera’s software has also been made smarter — for example, it chooses the best of the burst mode pictures to show you first, adjusts the True Tone flash automatically depending on external conditions, and continually alters the exposure as you pan while taking panorama photos.

Perhaps the most drastic outward change to the iPhone 5s is its new Touch ID fingerprint scanner, built into the home button (see “Q&A about Fingerprint Scanning,” 10 September 2013). The capacitive sensor, which is 170 microns thick and has a resolution of 500 pixels per inch, can unlock the iPhone or authorize iTunes purchases with just the touch of a finger. The Touch ID scanner can learn up to five fingerprints and can capture a fingerprint from an angle. Should you not wish to (or be able to) use the fingerprint scanner, there is an option in iOS 7 to use a password instead of a fingerprint scan. The home button itself can still be pressed for standard behaviors, though gone is the rounded square icon that has been an iPhone standard since day one.

In terms of industrial design, Apple has traded the black and white dichotomy for three options: gray, silver, and gold. In each case, the metallic color occupies the edge of the phone and the bulk of the back. For the gray model, the face (apart from the screen, obviously) is black; for the silver and gold models, it’s white. We’ll be curious to see how the different colors sell — the gold seems pretty gaudy to our eyes.

To be released alongside the iPhone 5s is the iPhone 5s Case, a $39 leather case available in five colors: black, brown, beige, yellow, blue, and Product(RED), the last of which will have proceeds donated to the (RED) AIDS charity. Like the iPad Smart Cover, the iPhone 5s Case features a microfiber lining to keep the phone clean. The dye has been infused into the leather, so hopefully we won’t see the color rub off like it did with the leather Smart Covers. The iPhone 5s Case is also compatible with the iPhone 5, since the two phones have exactly the same dimensions. That should make accessory manufacturers happy too. 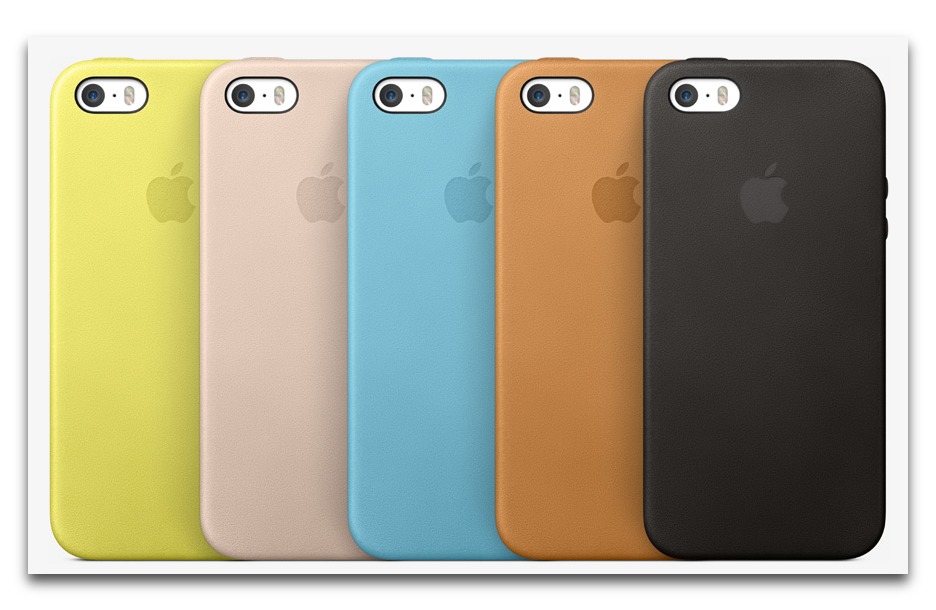 Additionally, Apple is getting back into the dock business, with docks for both the iPhone 5s and iPhone 5c. The new iPhone 5s Dock features a Lightning connector, a line-out port to connect your iPhone to powered speakers, and hands-free calling thanks to “special audio porting.” It costs $29 and is also compatible with the iPhone 5, but unfortunately does not include a Lightning-to-USB cable.

Comments About iPhone 5s Announced, Knows You by Touch