Why do you do it, Apple? Why did you feel the need to switch the iPhone’s trailing letter from uppercase to lowercase?

Most of the time, no one notices, and that’s the goal — such blunders get in the way of our mission, which is to communicate information and ideas clearly and accurately. (I would be remiss if I failed to give a quick shout-out to our friend Chris Pepper, whose skill in spotting mistakes in our articles could land him a lucrative career in proofreading, should he ever tire of Unix system administration.)

Our efforts require constant vigilance and knowledge of a vast amount of arcana, such as the missing space and capitalized P in QuarkXPress. For the most part, we try to honor whatever naming conventions companies come up with, apart from non-acronym all caps (Nvidia, I’m looking at you) and trailing punctuation (perhaps Yahoo’s exclamation point is now meant to be ironic).

Small, but Annoying — So what’s with Apple suddenly changing from uppercase letters in the iPhone model name to lowercase? They started with the iPhone, then jumped to the iPhone 3G, because of its 3G compatibility. Reasonable enough, but when the time came to revise that model, Apple decided to add an S to the name (to indicate that it was speedy, snazzy, and sophisticated, perhaps), and, for one dark week or so, put a space between the 3G and the S, as in “iPhone 3G S.” I don’t know that I can claim credit for Apple’s reversal after having complained vociferously about the name in our initial coverage (see “New
iPhone 3GS Boosts Power, Performance, and More
,” 8 June 2009), but I was exuberant to see Apple close up the space (see “Ding, Dong, the iPhone 3GS Space Is Dead,” 22 June 2009). Next came the iPhone 4, and, with no nomenclatural surprise, the iPhone 4S, followed by the iPhone 5. Truth, reason, and the Oxford comma ruled supreme.

(During this time, alas, Apple reverted from the reasonably named iPad and iPad 2 to the confusing iPod naming scheme, such that our article about the iPad 3 had to explain that it would officially be called just “iPad” again, forcing us to prefix it repeatedly with “third-generation” (see “Apple Announces Third-Generation iPad,” 7 March 2012). That continued with the fourth-generation iPad (not iPad 4), likely to make room for the iPad mini. It seems likely that we’ll soon see a fifth-generation iPad instead of an iPad 5 and a second-generation iPad mini in favor of an iPad mini 2.)

With Apple’s announcement of the replacements for the iPhone 5, it was only logical that the new models would be called the iPhone 5S and iPhone 5C, and if you look at liveblogs and early drafts of articles, that’s what everyone wrote. But it wasn’t to be. As part of our consistency checking, we glanced at Apple’s press releases before we published and discovered that Apple had demoted the letters, giving us the iPhone 5s and 5c instead. Worse yet, it was soon discovered that Apple had gone back to rewrite history, renaming the iPhone 4S to the iPhone 4s.

Plurals and Possessives and Bears, Oh My! — From the perspective of someone who lives and breathes text, this is a wrong-headed move, because it both is inconsistent and introduces confusion-causing ambiguity, not just into everything that’s written from now on, but also into the historical record. From now on, whenever you see the phrase “iPhone 5s” in a sentence, you’ll have to read carefully to determine if it’s talking about the new iPhone 5s, or several iPhone 5s. In some cases, there may be no way of knowing what’s meant — you can’t know what I’m referring to when I write “The iPhone 5s flew off shelves.” John Gruber also talked about this briefly on Daring Fireball a year ago. Luckily, the difference is clear in spoken English, where one is “five-ess” and the other is “fivez.”

On the other side of the fence, the Chicago Manual says not to use an apostrophe to form the plurals of capital letters used as words, abbreviations that contain no interior periods, and numerals used as nouns, as in: “In education in the 2000s, the three Rs were joined by URLs.” So although the Chicago Manual is silent on the combination of letters and numbers Apple used in “iPhone 5s,” I believe it would come down on the side of an apostrophe-based plural. (We won’t suggest the William Safire approach, at least as satirized by the Onion, which would suggest “iPhones 5s.”)

That then leads to the question of how to form the possessive of the plural, if you wanted to discuss “the cases of the iPhone 5s’s on the table.” The logical conclusion would be to say “the iPhone 5s’s’ cases on the table,” a clause useful mostly for causing copy editors to throw themselves from windows. The carnage would be defenestrating.

Laying Down the Law, or at Least the Style Guide — What then, are our options? I believe strongly in honoring the names chosen by creators, which is one reason why TidBITS follows the style of Tim Berners-Lee and the World Wide Web Consortium in capitalizing “Web” when it stands alone as a word. From that standpoint, we will grin and bear the lowercase “iPhone 5s” and “iPhone 5c.” They are Apple’s names, and Apple gets to say.

However, I stop short of allowing any person or company to decree that previously used names are now wrong, so we will stick with the original “iPhone 4S” capitalization. This is actually the second time Apple has changed the name of a major product mid-stream — at some point during the reign of Mac OS X 10.7 Lion, Apple suddenly started dropping the “Mac” and referring to the operating system as merely “OS X Lion.” We refused to honor that flip-flop, but when it was time for the next big cat, we acceded and called it OS X 10.8 Mountain Lion.

(As an aside, the best snarky comment generated by this discussion on Twitter came from Arik Dreyer, who slyly noted that Apple’s lowercase treatment of the 5s and 5c was consistent with Mavericks and Maverickc.)

In the end, what we’ll actually do is what we’ve done all along, which is write around these awkward constructions. Much as I dislike the inconsistency of having to capitalize some iPhone names and not others, the reality is that plurals in particular have long been worrying, so we try to avoid them. Such rewriting might involve recasting my final example above to something like “the case of each iPhone 5s on the table.”

We hope that, as is always our desire, you simply won’t notice such textual contortions.

Blame the Glyphs — So why did Apple make this change? Apple PR hasn’t deigned to reply to my query on that topic, and I’ve seen speculation that the 5 and the capital S were somehow too similar, particularly in Helvetica Neue. I’m not buying that argument in particular, for the simple reason that Apple almost always uses a special boxed form of the letter when typography is in question, as you can see in my collection of screenshots from Apple’s iPhone pages through the years. 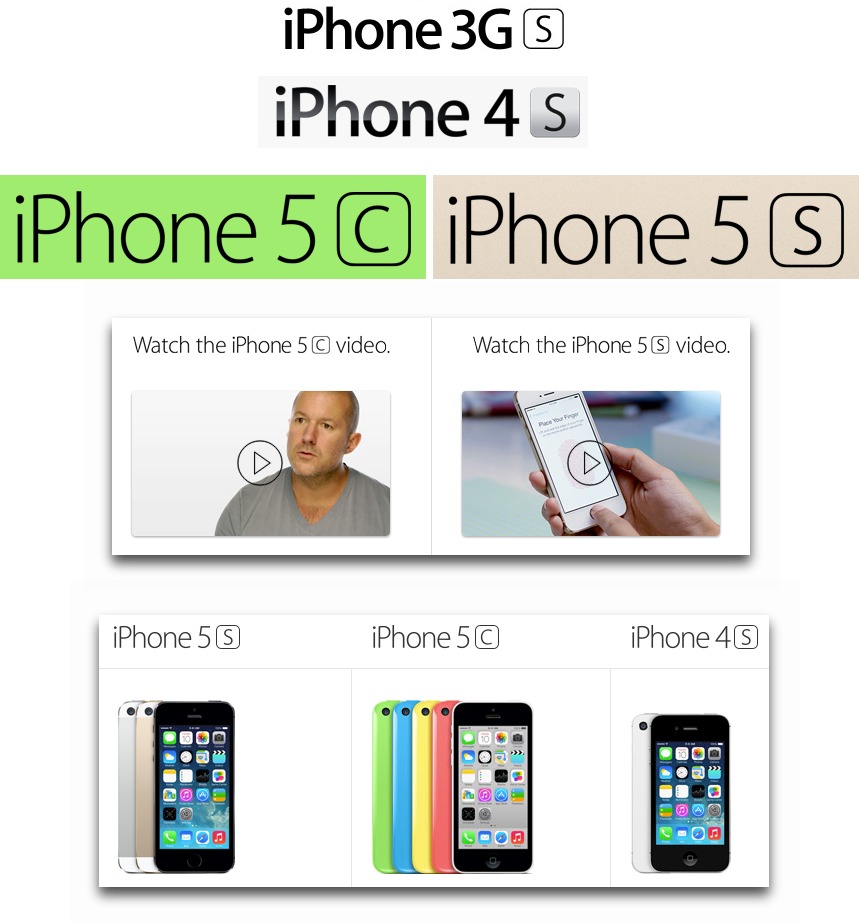 I suspect we’ll never know why Apple decided to switch to lowercase letters, just as we’ll never know why the company decided to drop Mac from the name of its operating system. The reasons might be complex and intertwined with numerous future business decisions (perhaps capital letters are considered bad luck in China?), or they may simply be capricious, because Jony Ive decided it looked better.

It’s worth remembering that, for the most part, the concerns I’ve laid out above seldom come up for Apple itself. Apart from the department that writes support articles (also the only group within Apple that is forced to struggle with the company’s constant reuse of names), it’s uncommon for Apple to depart from the curiously formal trademark usage, where plurals and possessives don’t come into play. Apple marketing material consistently uses iPhone 5s as a proper name, as in: “iOS 7 was designed with iPhone 5s in mind.”

No one but Apple talks that way, but that doesn’t mean Apple wouldn’t like you to. For some wonderfully delusional thinking that may explain Apple’s lack of concern with reader confusion, check out Apple’s Guidelines for Using Apple Trademarks and Copyrights, where you’ll learn that trademarks are adjectives used to modify nouns, where the noun is a generic name of a product or service. As adjectives, Apple says, trademarks may not be used in the plural or possessive form.

Aha! Now we’re getting somewhere! With a quick trip to the Apple Trademark List to discover what the generic term for the iPhone is, we discover that we should actually be using it in a form like this: “I’m sure we’ll be hearing more about the iPhone 5s and iPhone 5c mobile digital devices in the future!” We’ll get right on that. 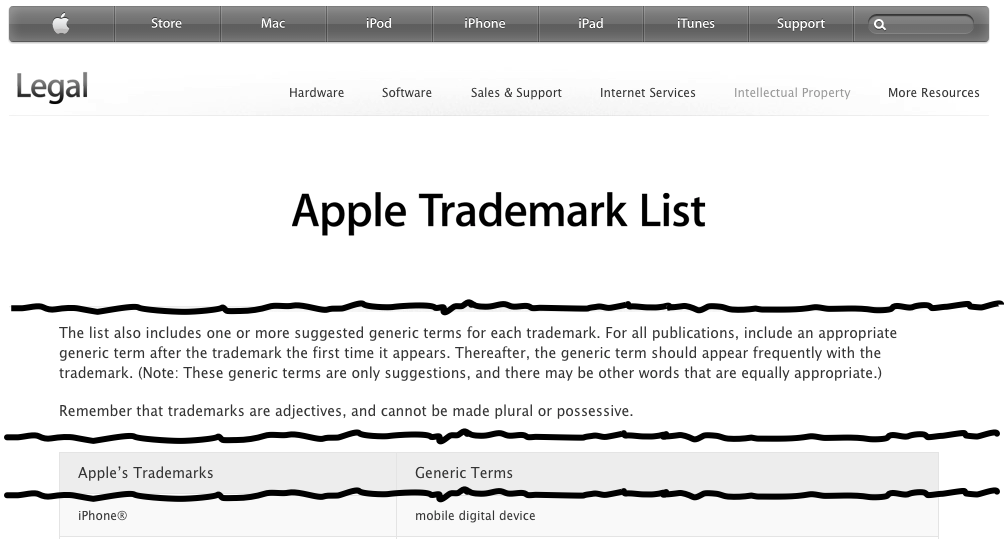