With the introduction of iOS 7 comes the long-awaited iTunes Radio, Apple’s personalized music streaming service that competes with the likes of Pandora and Songza. iTunes Radio is built into the Music app in iOS 7, the just-released iTunes 11.1 on the Mac (see “iTunes 11.1 Adds iOS 7 Compatibility and iTunes Radio,” 18 September 2013), and the second-generation Apple TV and later, with a forthcoming software update.

For those of you familiar with Pandora and similar services, you might shrug and say, “Well, who cares?” To be honest, you wouldn’t be entirely unjustified in doing so, as iTunes Radio is functionally identical to Pandora, basing stations on genres, artists, or songs. However, what iTunes Radio can offer that Pandora can’t is complete integration with your Apple devices. You can control iTunes Radio via Siri, your Mac’s media keys, or your Apple TV’s remote control. If you hear a song you like, you can buy it immediately or add it to your wish list. And if you’re already paying for iTunes Match, you’re guaranteed an ad-free experience.

If you’re a fan of the Beatles, you’ll be happy to know that Apple struck a last-minute deal to get them on iTunes Radio, making it the only streaming service besides Pandora to feature the Fab Four.

iTunes Radio on iPhone and iPad — To get started, fire up the Music app in iOS 7. You’ll be presented with a big, friendly welcome to iTunes Radio. Tap Start Listening to begin. 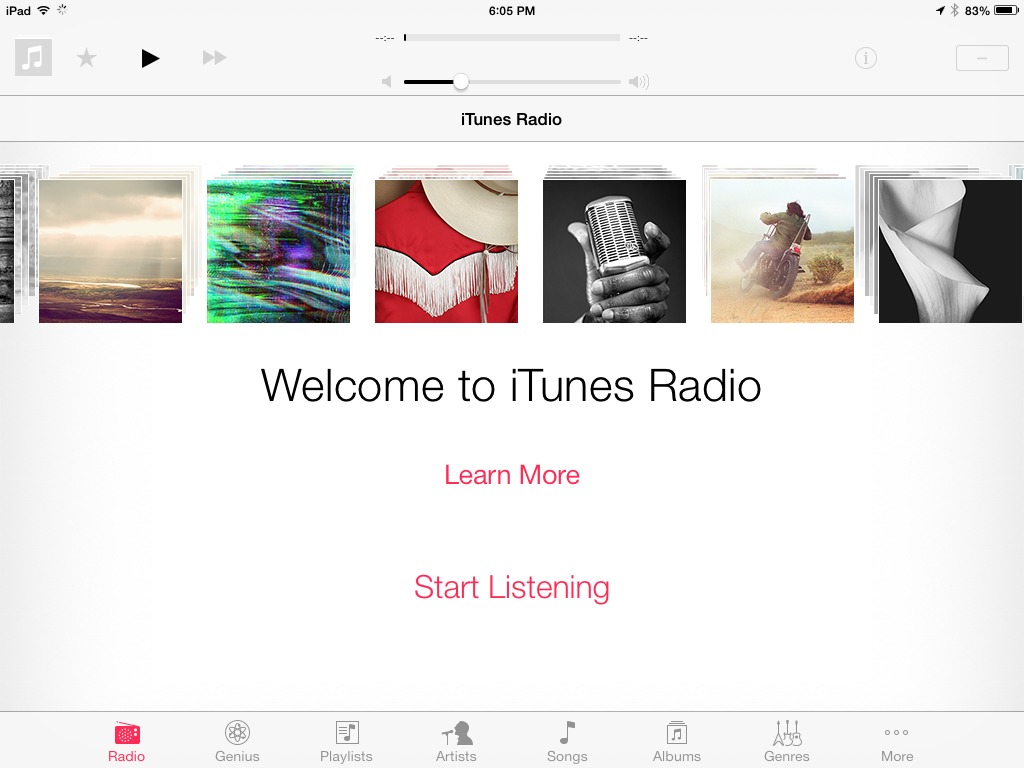 There are three ways to create a new station. The first is iTunes Featured Stations, which change periodically. Just tap one to start playing, and if you like it, tap the info button at the top of the player screen to add it to your stations. More on that in a bit. 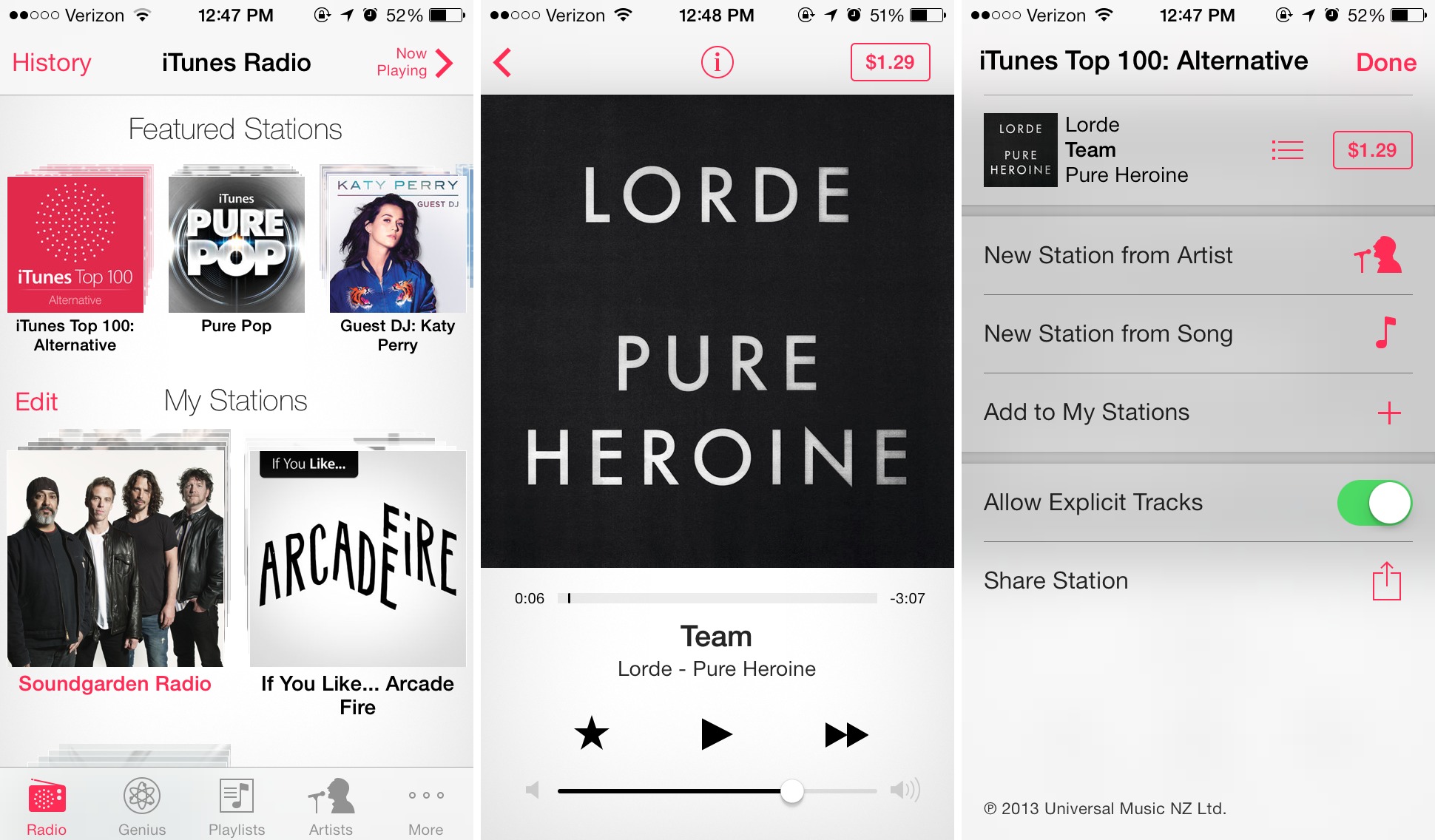 The next two ways start by scrolling down and tapping the New Station button. You can either create a station based on a search for genre, artist, or song, or you can select from a number of genre stations.

Each genre station features a number of sub-genres, so for instance, in addition to the Metal Radio station, you have sub-stations for, amusingly enough, Black Metal, Death Metal, Doom Metal, Grindcore, Hardcore Metal, Thrash Metal, and more.

Once you have a station set up, you can tailor it to your tastes. Tap Edit next to My Stations to edit your stations. If you’d like to delete multiple stations, tap Edit on that screen to present delete buttons for each station. If you want to tweak individual stations, just tap the station name. 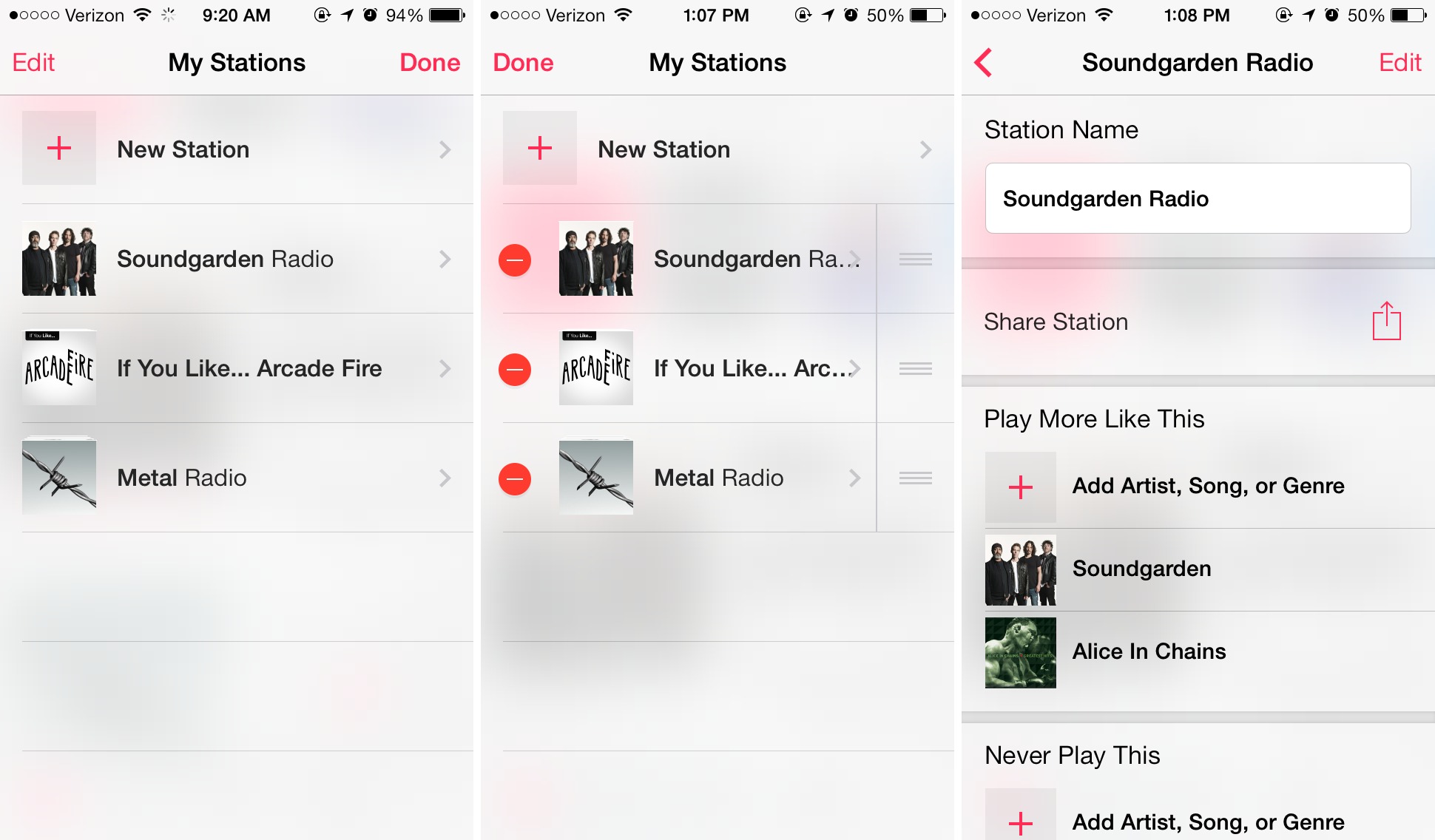 When editing a station, you can change its name, share the station with a friend via AirDrop, Mail, Twitter, or Facebook, and, best of all, tell it what to play and not play. For instance, I want my Soundgarden station to play more Alice In Chains, so under Play More Like This, I added Alice in Chains. But I don’t want Nickelback, so under Never Play This, I tapped “Add Artist, Song, or Genre” and added them. If you’d like to remove an item from one of the two lists, just swipe it to the left to reveal the Delete button.

Let’s talk playing music itself. At any time, you can tap Now Playing in the upper-right corner to access the music player. It’s similar to playing local or iTunes Match music, with a few important differences. First, you’ll notice a prominent purchase button with the price of the track. If you want to buy the currently playing song, just tap that to buy it. Of course, you’ll have to enter your iTunes password first if you haven’t bought anything in the past few minutes. 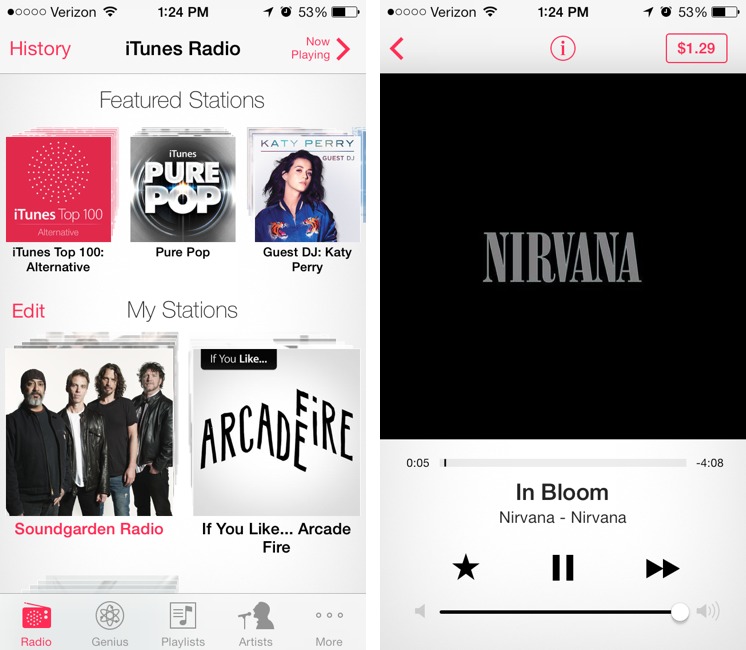 Tapping the star brings up a menu that lets you tell iTunes Radio to play more like that track, never play that song again, or add it to your iTunes wish list. If you make a mistake with the first two, you can always edit the station to fix it. You can also access the star from the Lock screen controls. 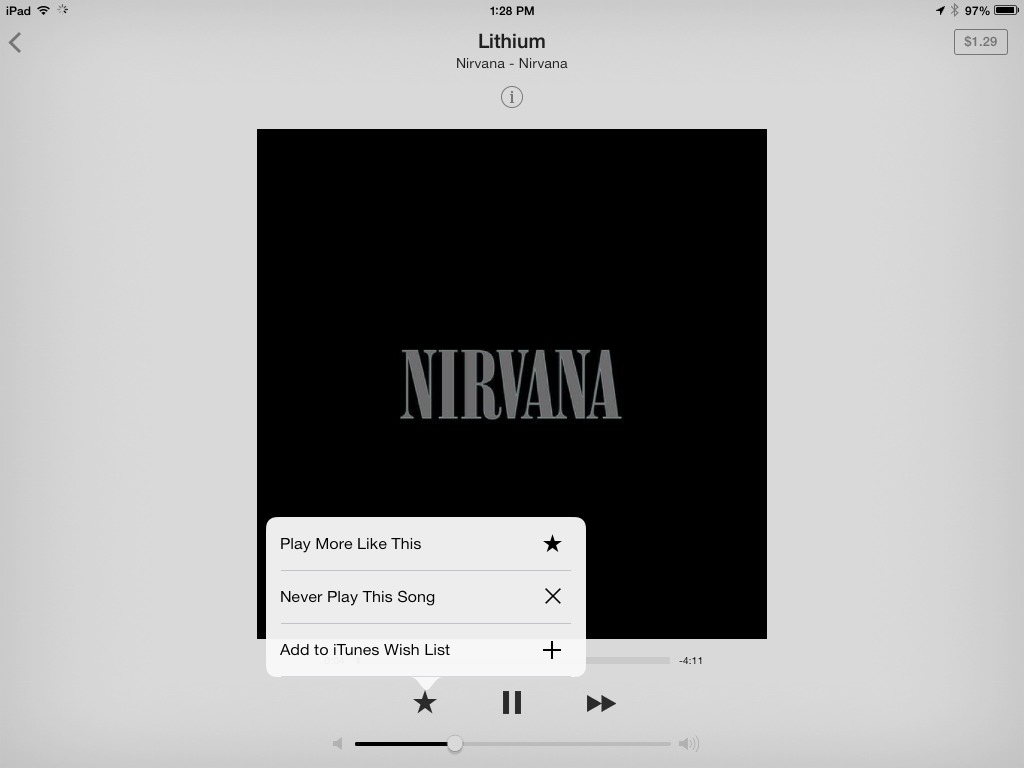 The Next Track button does exactly what you’d expect, but you can’t skip more than six times in an hour on a particular station. Rumor has it that iTunes Match subscribers will get unlimited skips, but that has yet to come to pass.

If you tap the Info button at the top, you get a number of options for both the track and the station. You can create a new station with that artist or song, tweak the station to play hits or less-related materials, and enable or disable explicit tracks. Explicit tracks are disabled by default, so if you want them, be sure to turn them on.

One of the coolest aspects of iTunes Radio is that you can access almost all of its features with Siri. You can tell Siri, for instance, to “play Soundgarden radio,” and it should come right up. Of course, you can say “play,” “pause,” or “skip” to control the player, but you can also tell Siri to “play more like this” or “never play this song again.” Siri can also add songs to your wish list, or tell you what song is currently playing. 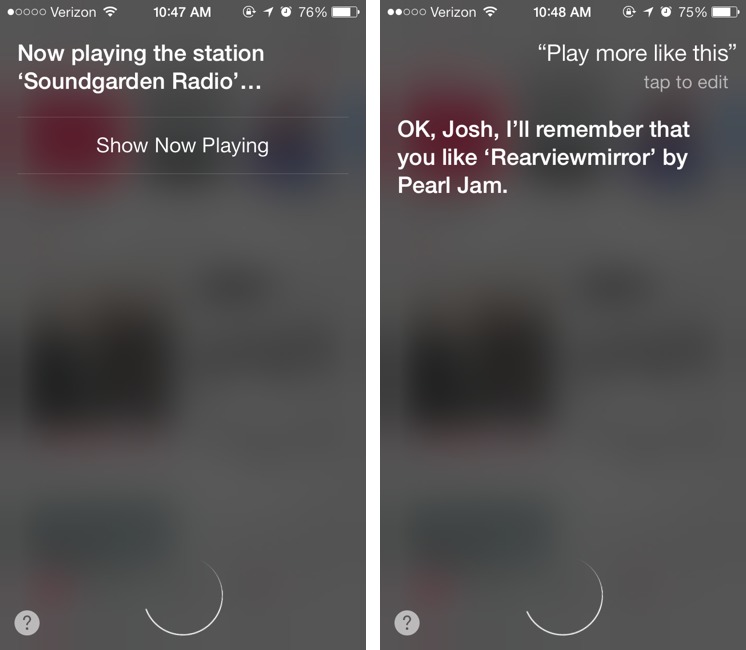 To get started, enter your music library and click Radio in the list of options at the top. To add a new station, click the plus button to the right of My Stations or select a featured station. As with the iOS player, you can either choose a genre station or search for the genre, artists, or song on which you want to base your station.

The star in the upper-left works like the one in iOS, enabling you to play more songs like the current one, never play that song again, or add the song to your iTunes wish list. 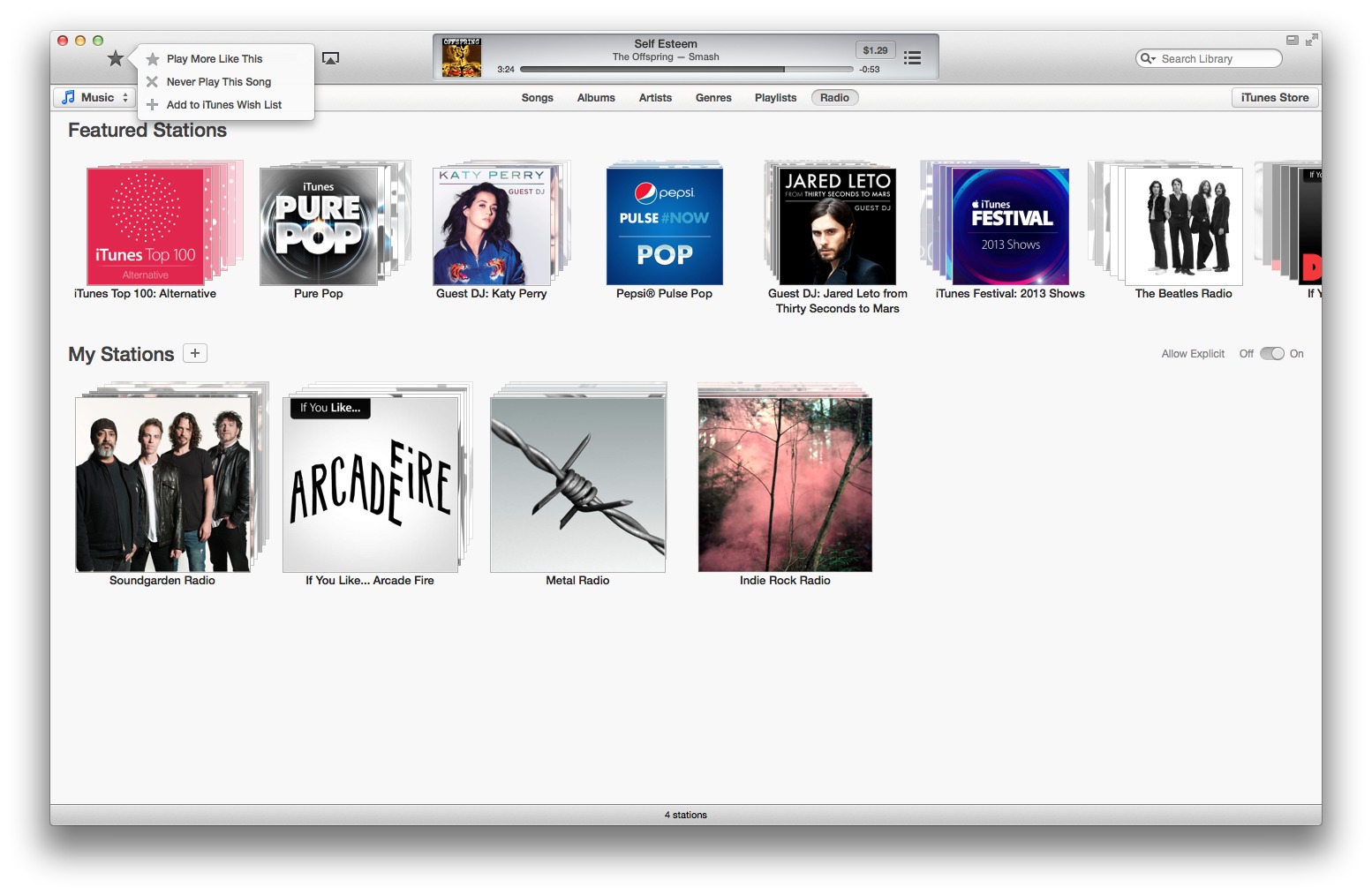 If you hover over the song title, you’ll see an arrow to the right of the title. Click it to reveal a menu enabling you to play more songs like it, never play the song again, add the song to your wish list, or create a new station from the song or artist. To the right of the song information is a button that lets you purchase the song. 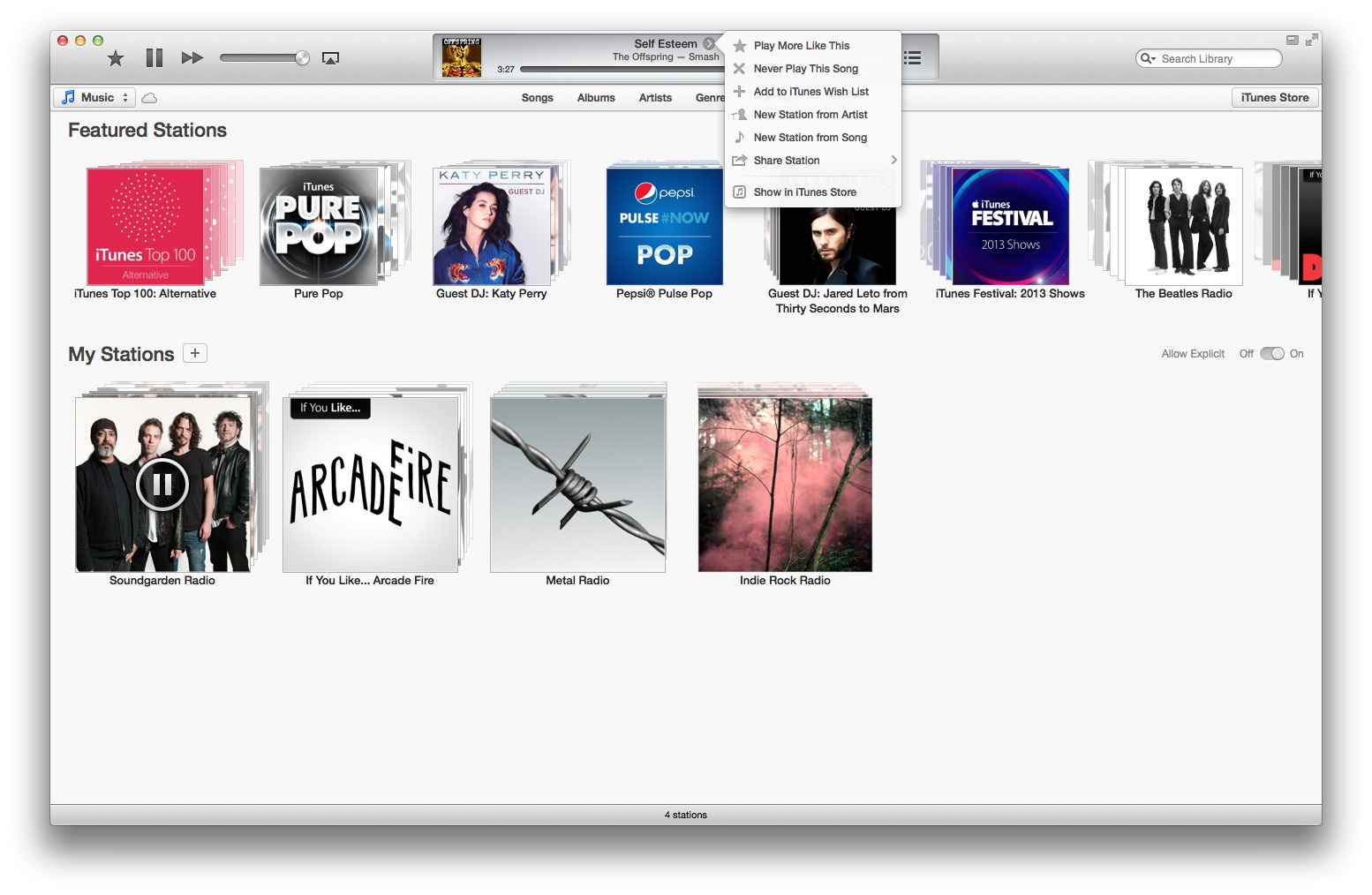 The Allow Explicit switch in the far right of the screen, in line with the My Station label, lets you enable or disable explicit content.

To play an individual station, click the play button in the middle of a station’s artwork. But if you click outside of that button, you can edit the station itself, including what to play and not play. If you double-click the station name, you can rename the station. 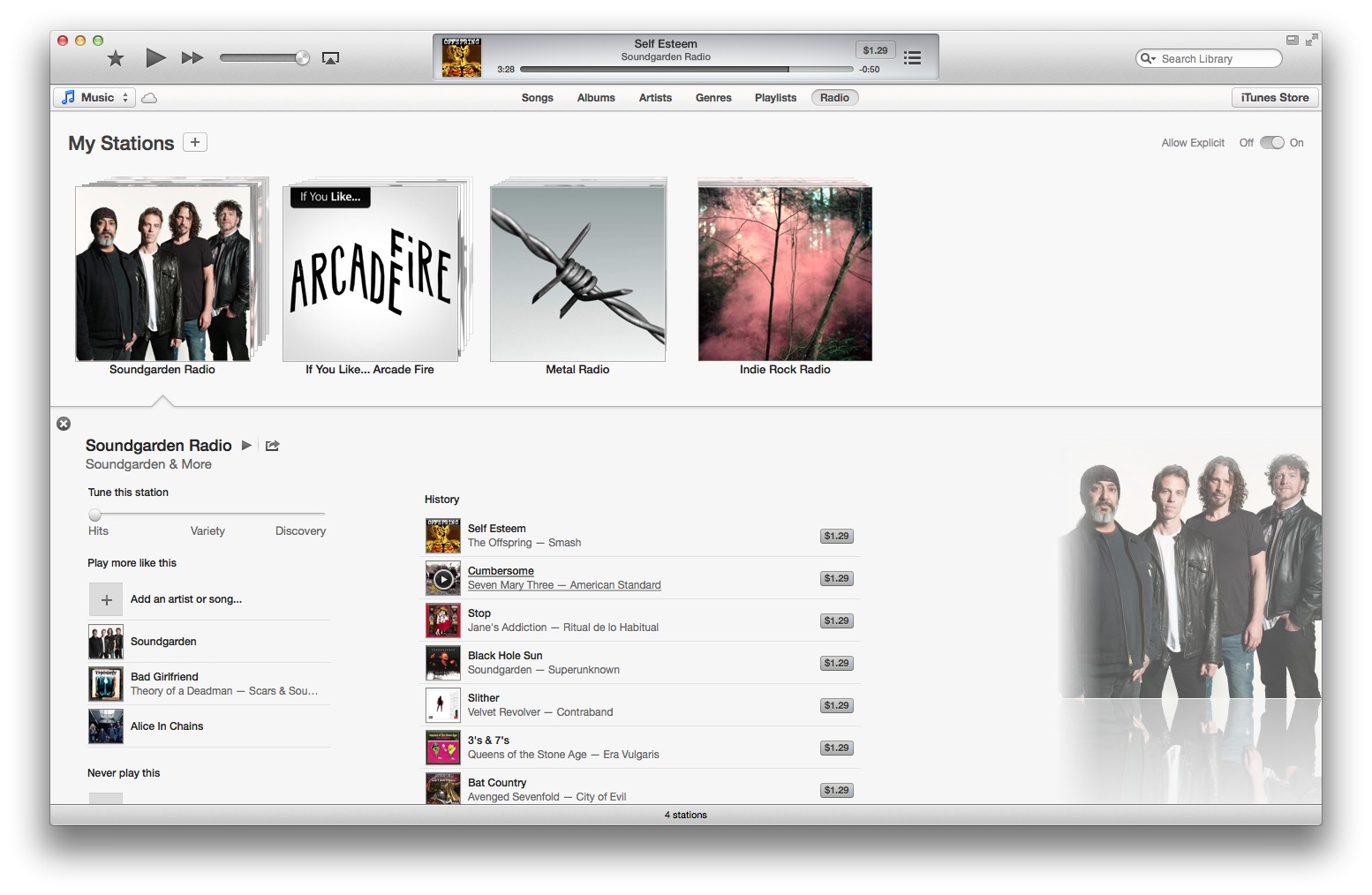 iTunes Radio on Apple TV — The Apple TV has been updated to software version 6.0, which brings iTunes Radio to the big screen. To get started, just open the iTunes Radio app from the Home screen.

[Update: Apple released the Apple TV 6.0 update on 20 September 2013, but after numerous reports of the update bricking devices, Apple withdrew the update. It appears that users with the 6.0 update can no longer access iTunes Radio from the Apple TV. However, when it’s available again, this is how it will work.]

You’ll find the interface markedly similar to its Mac and iOS siblings, without any loss of capability. The Stations tab shows you the stations created in the Music app on iOS or in iTunes, as well as Featured Stations. If you want to add a station directly from your Apple TV, you can select Add Station from the Stations tab, or navigate to the Add Station tab. Creating a station on the Apple TV works exactly as it does elsewhere; you can either choose a genre station or search for your own.

You can even edit your stations by navigating to the Edit Stations tab. There, you can enable or disable explicit content, and customize each station by selecting what to focus on and what to avoid.

After starting a station, the music keeps playing even if you navigate out of the iTunes Radio app. To control playback, open the iTunes Radio app again and then navigate to the Now Playing tab. There, you can play, pause, or skip to the next track. If you press the down arrow on the remote, you’ll be presented with a scrolling list of options that let you buy the track, add the station if it isn’t in your list already, add the song to your wish list, create a new station from the artist or song, or view the album in the iTunes Store.

Rock On — Overall, iTunes Radio is a great free service that strengthens the entire Apple ecosystem, thanks to its integration into iOS, Mac OS X, and Apple TV, plus its connections with Siri, iTunes Match, and more. Having control over each station is delightful, and iTunes Radio promises to have at least as good selection as its competition. If you love music and have a compatible device, check it out.