With iOS 7 freshly installed on your iPad, iPhone, or iPod touch, it’s time to verify that essential settings are configured properly and that you are up to speed on the most important changes. Work through this pre-flight checklist to ready yourself for your first few days with iOS 7. I’ll point out items that have moved in iOS 7 and talk about a few gee-whiz, sexy features later, but first, let’s take care of the two essentials: Lock screen security and signing in to important accounts and services.

Get Centered — In iOS 7, besides the camera, two control screens can be opened from the Lock screen: the new Control Center and the iOS 7 version of Notification Center. Because a passcode is not required to open those screens, you should make sure that you are cool with those items being available to anyone who picks up your device. If you aren’t, you can remove them from the Lock screen via the Settings app.

Indicated by a subtle dash-like lozenge at the bottom of the Lock screen, Control Center slides up from the bottom of the screen in response to a swipe up (if you have trouble with this gesture, start with your finger literally off the bottom of the screen). Experienced iOS users should find Control Center’s icon-driven features self-explanatory, including switches for Airplane Mode and Do Not Disturb, AirPlay options, and (on some models) a flashlight button. These controls seem generally innocuous, but if you want to keep a toddler from playing with them, for example, shut off that option in Settings > Control Center. And if you’re not a fan of Control Center in general, perhaps because it pops up while you’re while playing a
game, you can disable it within apps as well. 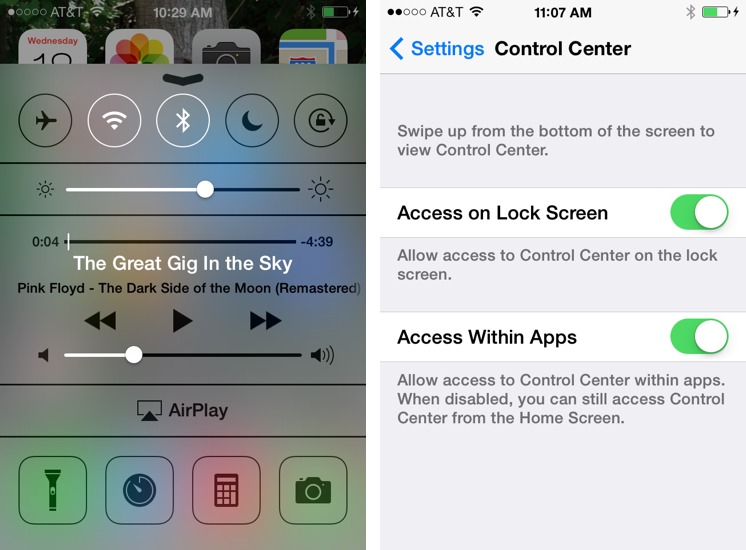 To avoid accidentally toggling an option in the top row of Control Center (such as Bluetooth), get in the habit of closing Control Center by swiping down from above it on the screen, or just tapping above it. 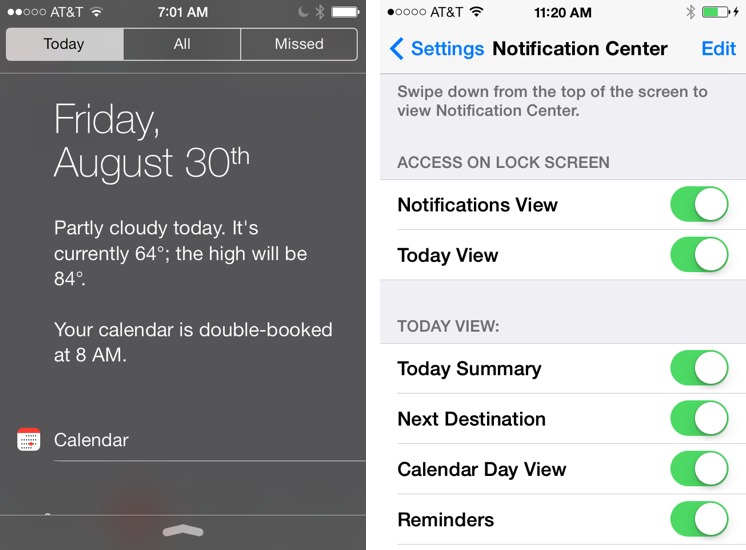 More Lock Screen Options — To tweak a few additional Lock screen behaviors, visit Settings > General > Passcode Lock, and consider the switches under Allow Access When Locked; the image below shows the options on my iPhone; different devices have slightly different choices. While you’re on the Passcode Lock screen, if you aren’t happy with the complexity or frequency of your Lock screen passcode, now is a good time to adjust it. (And, if you are lucky owner of a new iPhone 5s, with a passcode set up, you can turn on the Fingerprints feature.)

In case you’re wondering, the Camera app is always available on the Lock screen, so you can’t prevent someone from taking photos.

ID Your Apple ID — In Settings > iCloud and in Settings > iTunes & App Store, check your iCloud and iTunes logins to make sure you are signed in with the accounts that you want to use — many people have ended up with multiple Apple IDs, and it’s easy to end up with your accounts in a muddle.

While you are on the iCloud screen, make sure all the switches for individual iCloud services are set the way you want them. In particular, I strongly recommend turning on Find My iPhone, partly because it can be handy for finding a misplaced device, but more because it now renders the device useless to a thief by requiring your Apple ID to erase or restore it (see “iOS 7 Locks Stolen iPhones to Prevent Resale,” 18 September 2013).

Although you probably won’t see it immediately after iOS 7’s launch, keep an eye out for an iCloud Keychain switch. iCloud Keychain is designed to securely store and share your Web login credentials and credit card information between Safari in iOS and Safari on a Mac running OS X 10.9 Mavericks.

While you’re on the iTunes & App Store screen, look in the Automatic Downloads section and confirm the settings for downloading new content. In particular, pay attention to the new Updates switch in that list. If it’s on, new versions of apps will automagically download without your having to remember to retrieve them via the App Store app. However, this makes it more difficult for you to learn about what’s new in an update, or decide not to get it. A recent update to the Google Authenticator app, for instance, deleted users’ stored settings, and while Google pulled the update immediately and released another update that fixed the problem for affected users within a week, it still caused significant consternation for some
TidBITS readers. If you do enable any automatic downloading and you have a smallish data plan, take note of the Use Cellular Data switch; keep it off to make updates download only over Wi-Fi.

Check What Downloads over Cellular — In addition to limiting some iTunes Store downloads to Wi-Fi, as noted in the previous paragraph, you can keep data costs down by monitoring your usage and shutting off unwanted cellular activity. Visit Settings > Cellular and scroll down to access various options, including checking your usage details and shutting off cellular access for individual apps. At the bottom of the screen, note the System Services item, which reports on cellular usage for different background tasks in iOS 7, so you can tell if some background process has gone haywire. We haven’t seen any excessive data usage in iOS 7 betas, but we will be watching
carefully (“Mysterious iOS 6 Cellular Data Usage: A Deeper Look,” 24 October 2012). 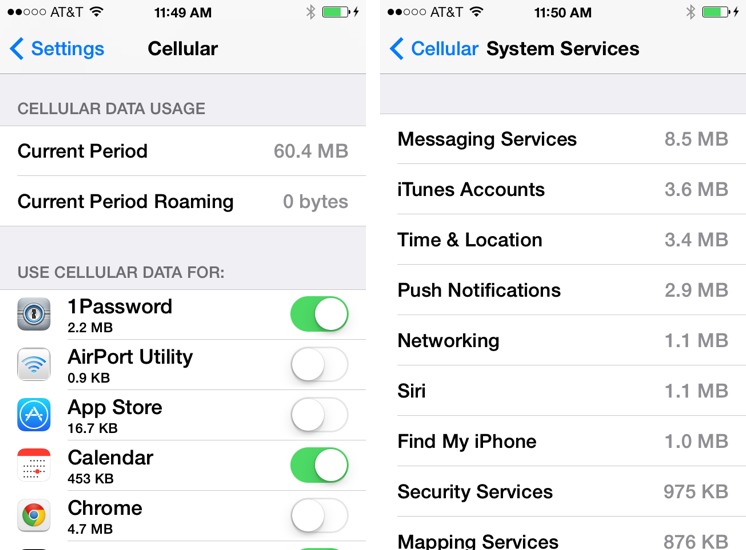 More Credentials — If you’ve upgraded an existing iOS device to iOS 7, your various accounts are probably set up correctly, but it’s worth checking anyway, and it’s absolutely essential when setting up a new device! First, make sure you can access your usual networks and devices by verifying that you have an active Wi-Fi connection and that any Bluetooth devices you use are properly paired.

With that done, check the apps and services that you use regularly to ensure you are logged in, or can log in if you want to. Open Settings and scan the entire list (at the left on an iPad) for account-based options. Of course, there are the settings in Mail, Contacts, Calendars, but don’t forget about Game Center, Messages, Twitter, Facebook, and — new in iOS 7 — Flickr and Vimeo.

Now, go beyond what appears in Settings. Do you use Dropbox or some other file-syncing service? Make sure it’s working! Is your email arriving? Calendars updating? You know the drill.

Where’d It Go? — Your device is secure and your accounts are set up. Good! Now it’s time to get oriented, and learn which features have disappeared or moved in the switch from iOS 6 to 7: 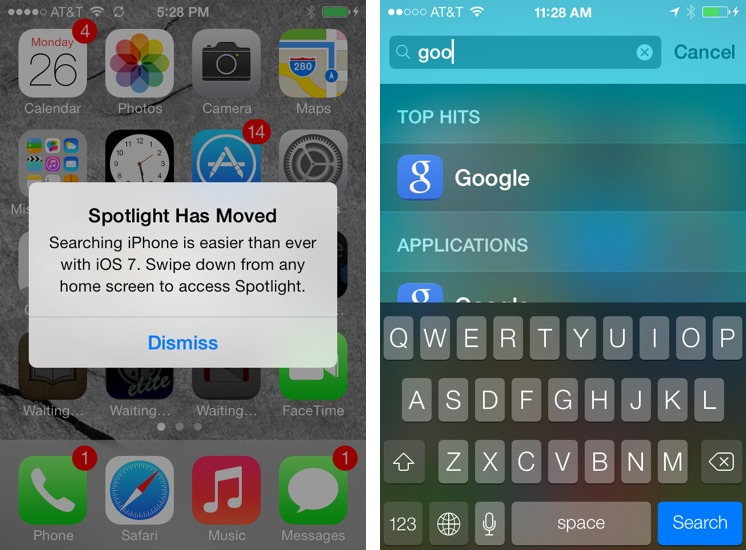 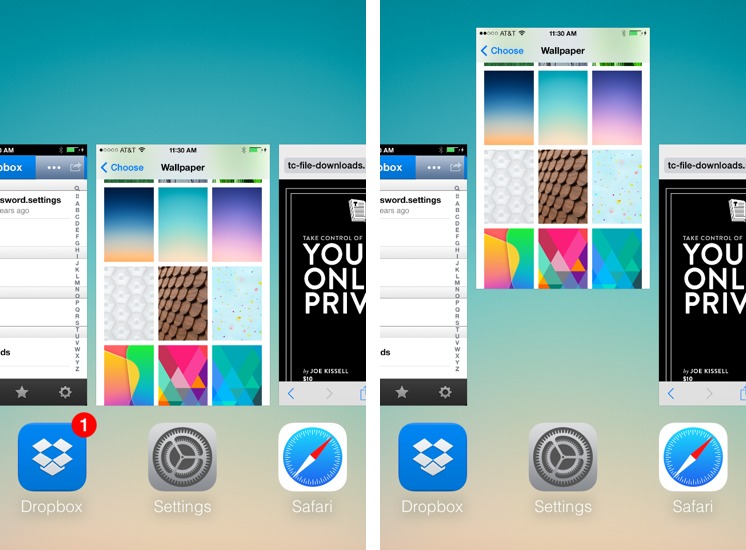 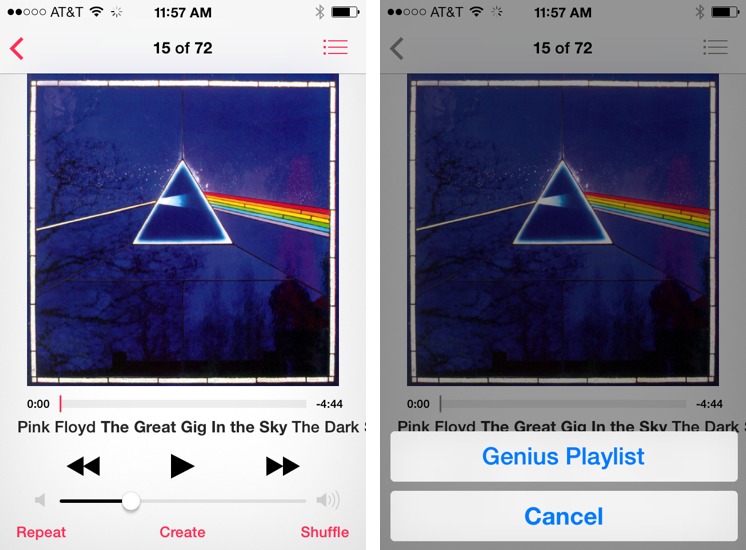 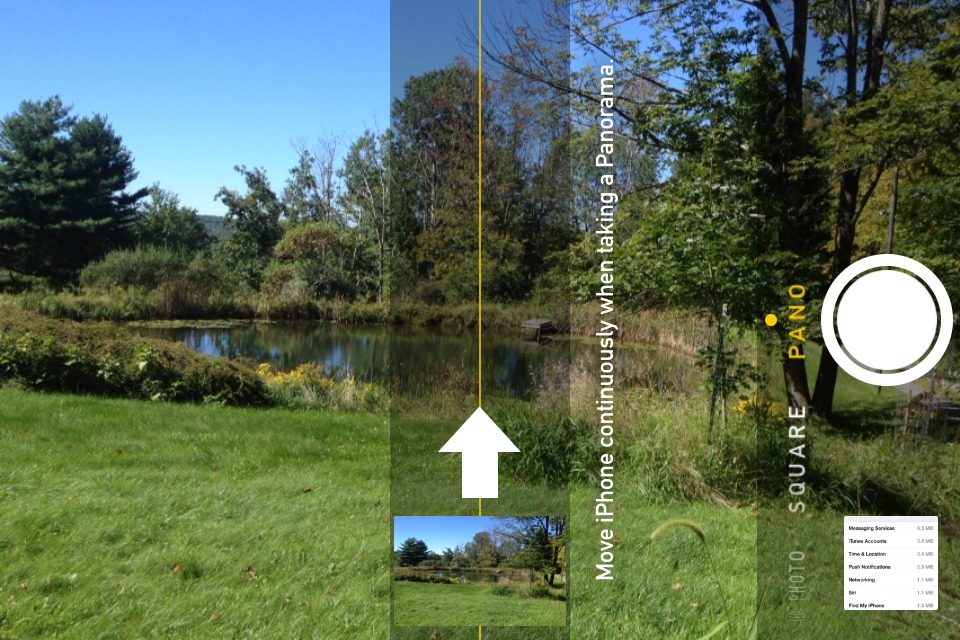 Must-know Features — It’s playtime! Let’s look at a handful of iOS 7 features that I can’t resist sharing. There are many more changes in iOS 7, but let’s focus on a few that are immediately useful, outrageously cool, or demo fodder: 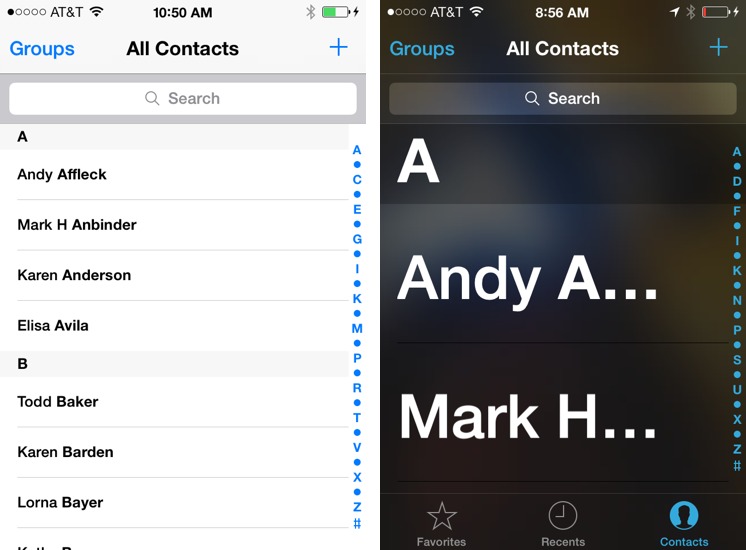 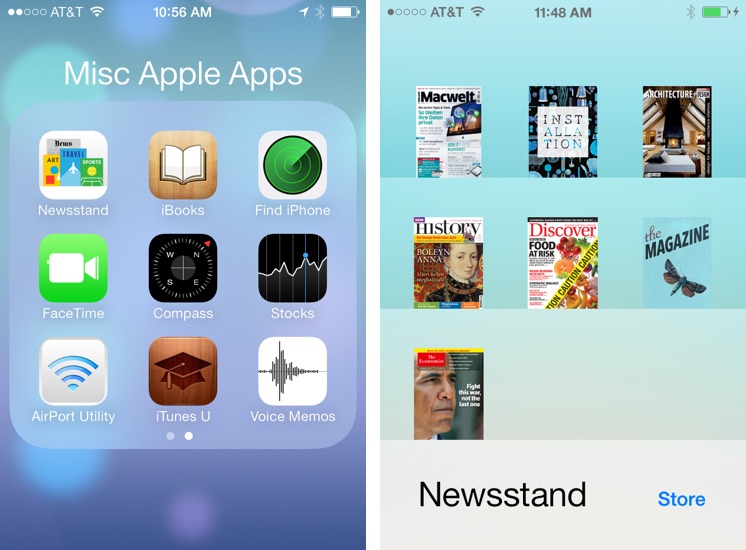 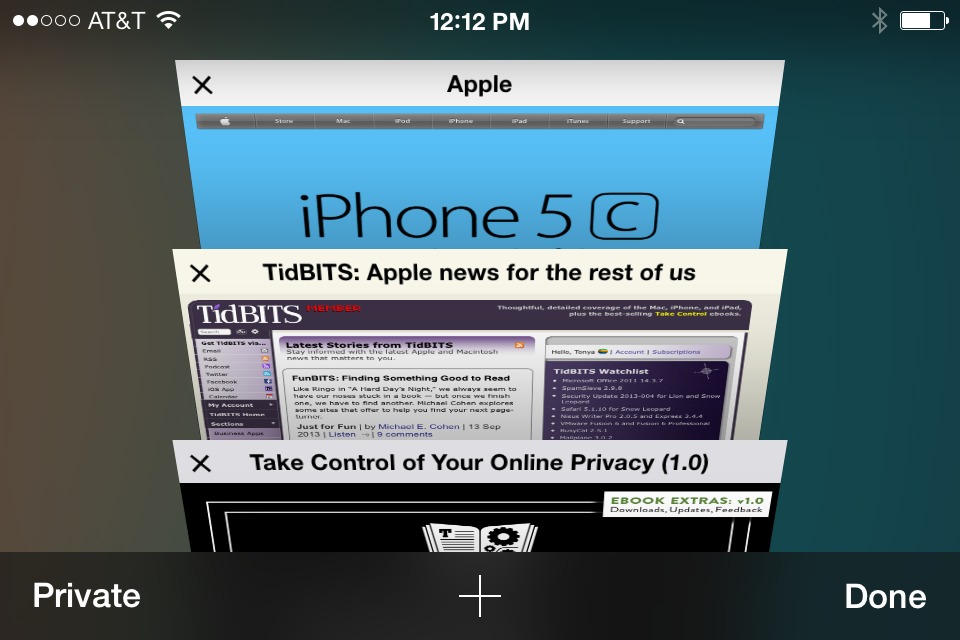 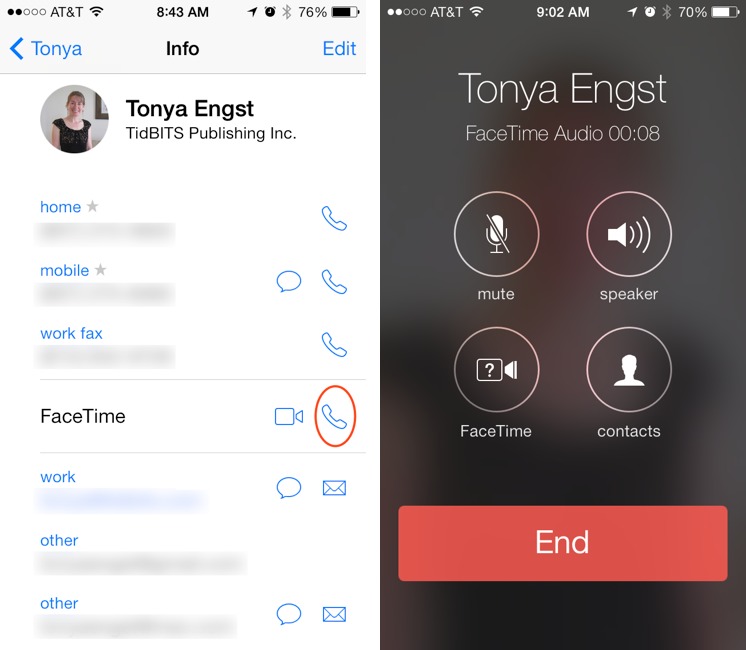 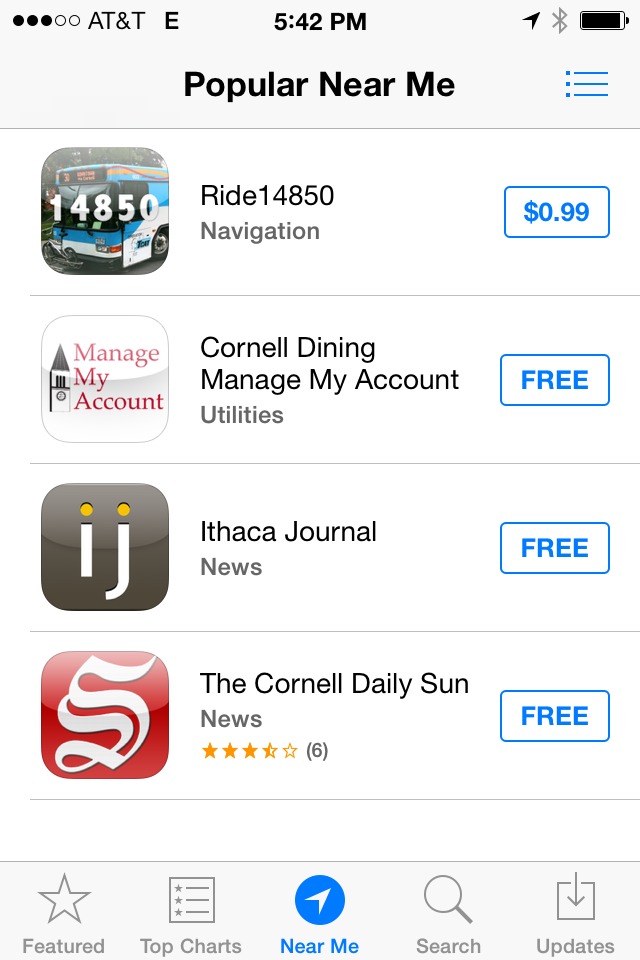 With the above list of notable features soaked into your brain, you’re good to go with iOS 7. But, although this article is a great start and enough to help you maintain your geek cred the first time you show off iOS 7 to a friend, it’s far from a complete tour of what’s new in iOS 7. Despite passionate lobbying from others on the TidBITS staff, I’ve not said anything about iBeacons (“The Promise of iBeacons in iOS 7,” 18 September 2013), most changes in Safari, call blocking, new Siri commands, and much more. Look to additional TidBITS articles for more about iOS 7 and how you can put it to good use.