The market for low-end compact cameras is quickly drying up, replaced by the photo capabilities of smartphones such as the iPhone, the iPod touch, and even the iPad. Apple has invested heavily in camera hardware, evidenced not only by the physical components of the camera in the iPhone 5s, but in the way image handling is boosted by dedicated processor functions.

For iOS 7, Apple also focused on the software that handles the capture and viewing of photos, revamping both the included Camera and Photos apps. The camera controls look quite different, but it’s the Photos app that’s likely to cause the most disorientation initially.

A New Look for the Camera App — Although the Camera app looks different from its iOS 6 incarnation, the features you’re accustomed to are still there: photo capture, video capture, HDR (high dynamic range) mode, panorama capture, flash, and a toggle for switching between the front- and rear-facing cameras. (The specific features vary by model. I’m using my iPhone 4S and third-generation iPad as reference here, but will note differences with other models as appropriate.) 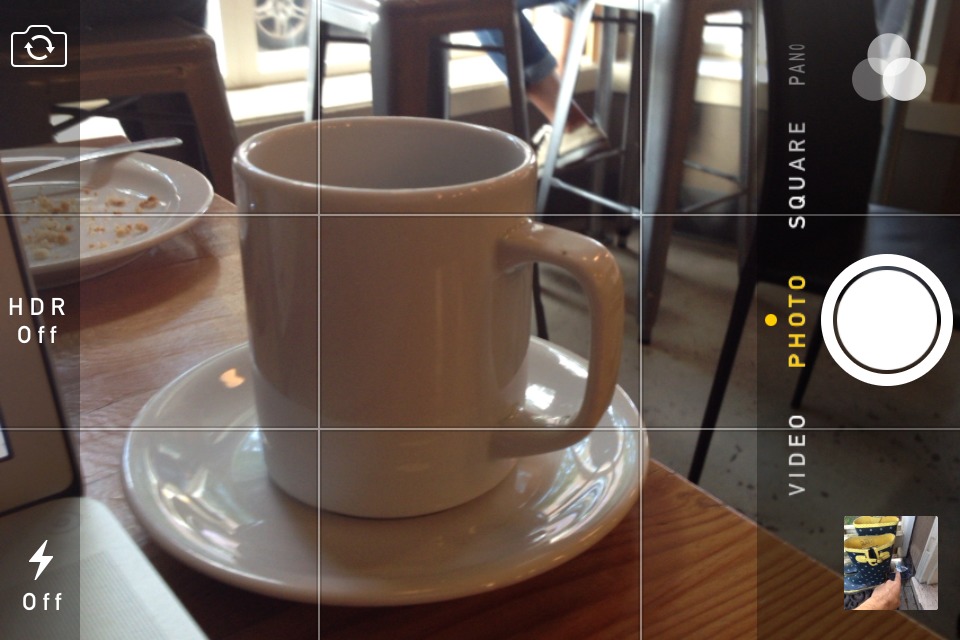 Switching modes seems awkward at first, requiring that you slide the mode names as if they’re mounted on an invisible wheel — you can’t just tap a name to activate it, which seems odd given Apple’s apparent desire to reduce analog visual cues in the operating system. There’s a better way, though: swipe the middle of the screen to change modes.

But Apple hasn’t just reshuffled the furniture. A new Square format crops the image so it doesn’t matter if you’re holding the device horizontally or vertically, and is no doubt a response to the aspect ratio used by the immensely popular Instagram service.

Apple has also added filters for applying effects to images. (Apple’s site says filters in the Camera app are available for the iPhone 5 and later and fifth-generation iPod touch and later, but I see them on my iPhone 4S. They’re not available in the Camera app on the iPad, but you will find them in the Photos app.) 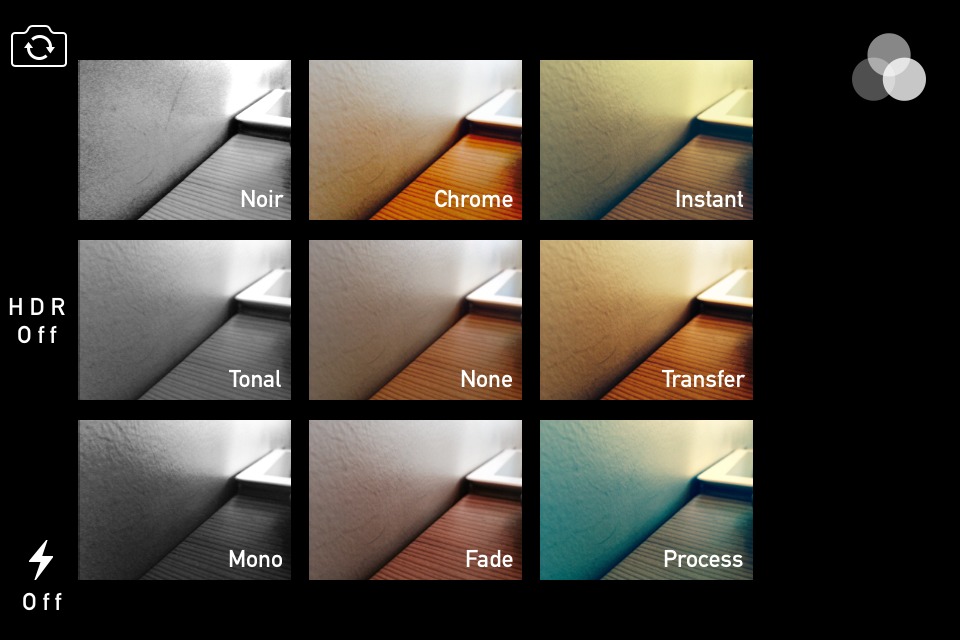 I’m not a huge fan of photo filters, but Apple has implemented them in a smart way. You can either apply the filter to an existing image, or, by tapping the overlapping circles, preview and apply the filter before you take the picture. If you change your mind later, you can switch to another filter in the Photos app or remove the filter and view the image as it was captured; the camera doesn’t hard-code the effect into the image. Also, the camera modes remember the last filter setting — you can leave Square
set to the Mono filter to always shoot in black-and-white, for example.

One welcome change is the capability to capture photos in bursts. The iPhone 5s is doubly impressive in that it can grab 10 shots per second. That performance didn’t trickle down to older models, but you get the same feature at a slower speed: pressing and holding the shutter button starts firing shots until you let go (at a little less than 2 shots per second on my iPhone 4S).

The new burst mode does remove one of my favorite features, though: under iOS 6 and earlier, you can press and hold the shutter button without taking a shot, giving you the opportunity to frame your shot and then simply slide your finger off the button to capture, thereby reducing the possibility of introducing camera shake by tapping the screen.

And here’s a small detail: The option to view a grid overlay is now enabled by default; you can turn if off in the Settings app under the Photos & Camera category.

A New Approach for the Photos App — As with much of iOS 7, the core capabilities of the Camera app are still there, but revamped in appearance. The new Photos app, however, forces a new approach to how you browse and view your images.

To start with, the view is broken down into three sections: Photos, Shared, and Albums. I’ll get the latter out of the way since it’s the least changed. Any albums you’ve created on the device or synced from iTunes appear here, with the addition of a couple of auto-generated albums: panoramas you’ve shot appear in a new Panoramas album, and movies are collected into a new Videos album. 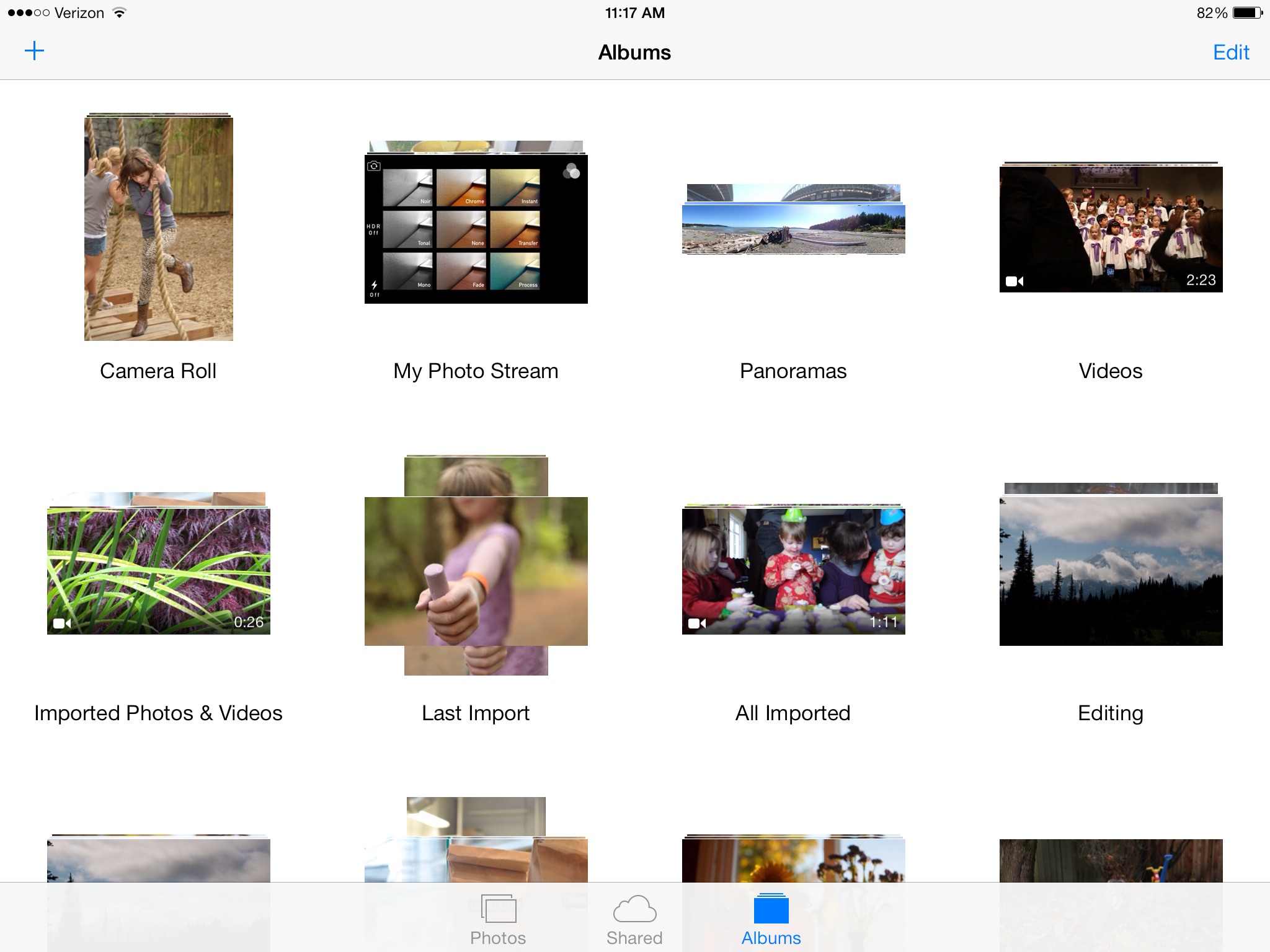 If you sync photos with iPhoto or Aperture and include the Faces feature, you’ll find a Faces album here as well. In iOS 6, Faces was its own top-level category. That applies to Events, too, synced from the computer.

The Photos category in iOS 6 was a catch-all for all photos on your device. Under iOS 7, Apple has instituted an organization scheme based on a combination of time and location, broken down into Years, Collections, and Moments.

At the top level is Years, which separates your photos based on years in what might just be the prettiest bit of modern art in the operating system. Every photo is represented with a tiny icon to give you a top-down view of your entire library (large libraries still require scrolling). 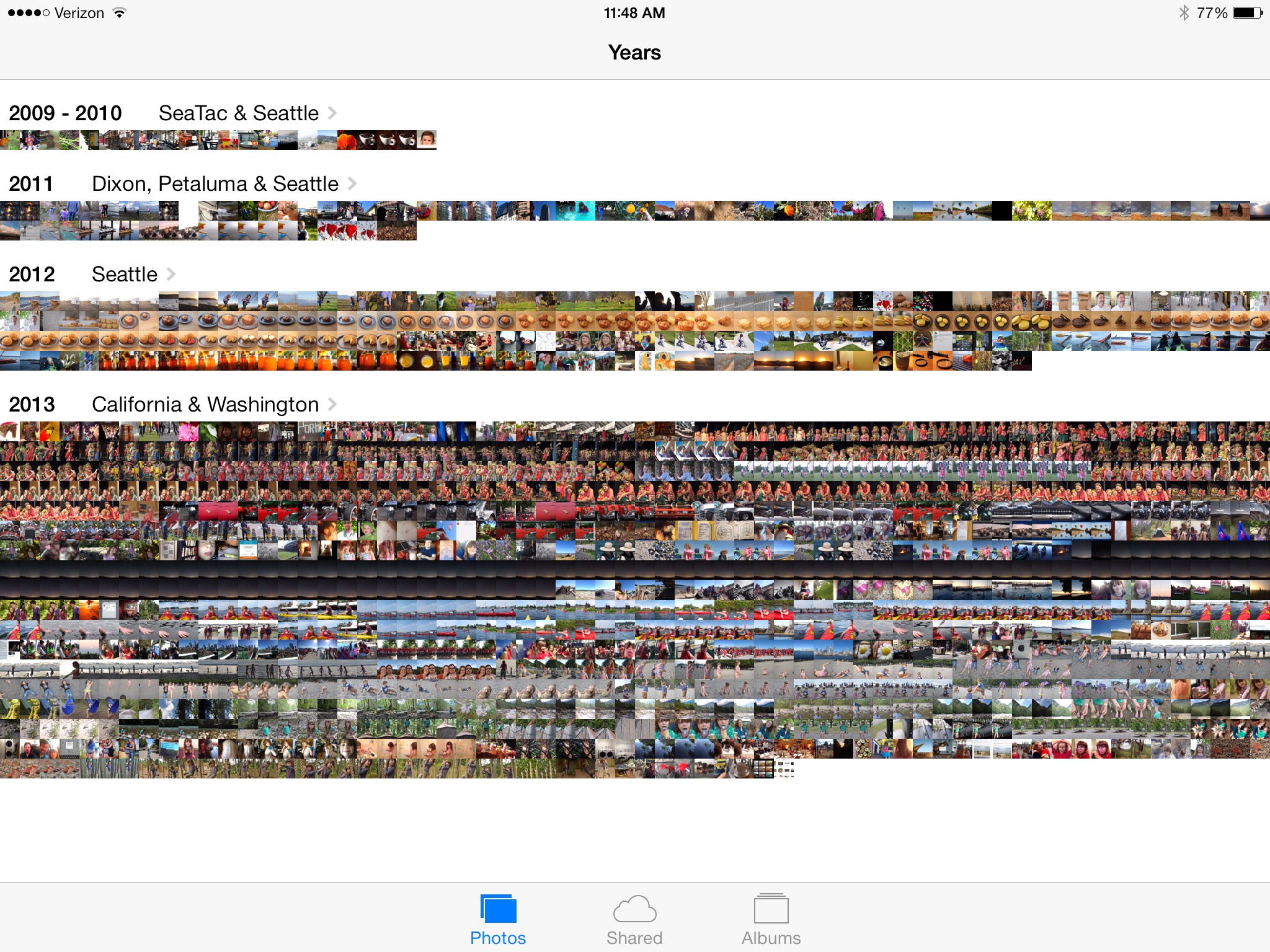 Drag your finger over the miniature thumbnails to view a slightly larger preview; when you let go, the app displays the last-touched photo full-screen. 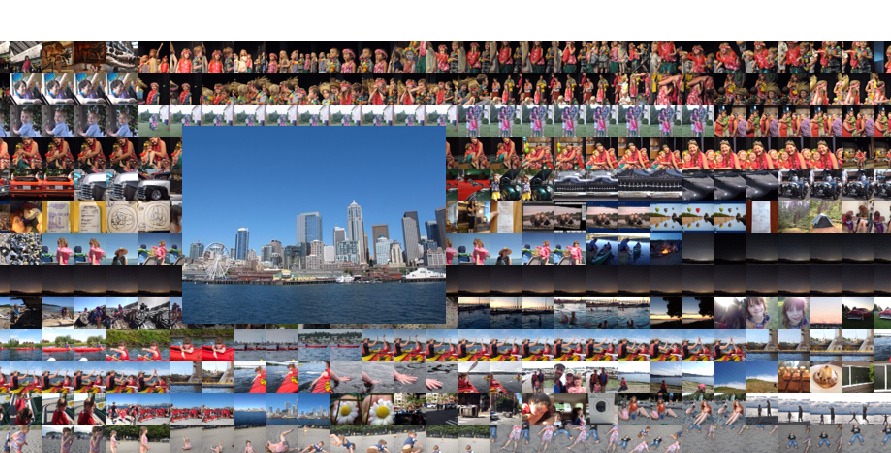 Although it’s not immediately apparent, two things are going on in the Years view. The library is organized by date, but the app also lists the locations in which the photos appear. Tap the name (such as “California & Washington” in my example above) to view the photos on a map. This view replaces the top-level Places view in iOS 6. 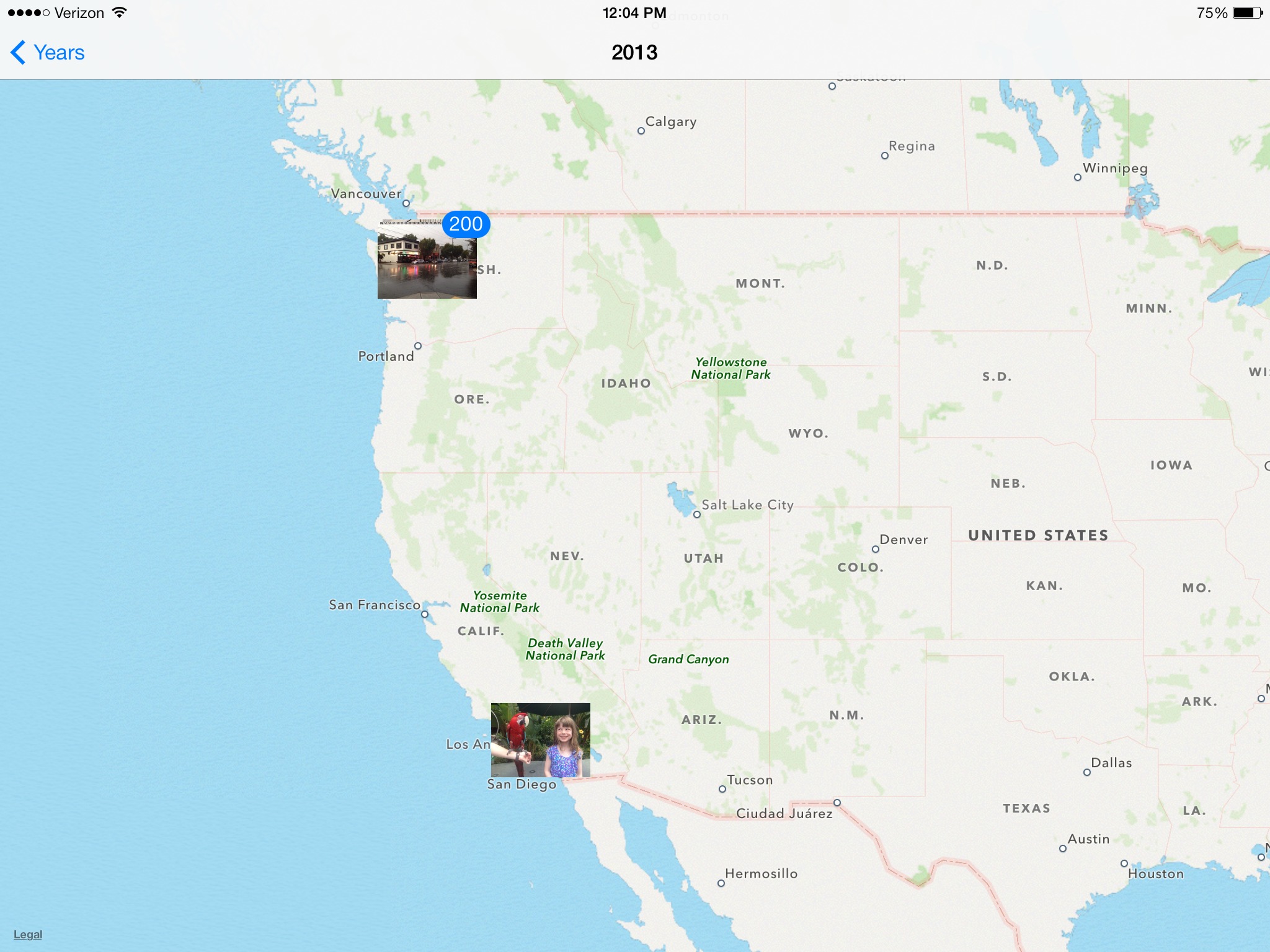 Pinch outward on a thumbnail to zoom in on the map and reveal more precise locations. Tapping a photo group jumps out of the map and reveals all photos in that location. The map feature extends all the way down through the Photos hierarchy; you can tap a location name in any view to bring up the map.

Going back to the Years view, tapping an area zooms into the Collections view, which offers more detail broken out into location and date. If a series of photos does not include geolocation data, they’re labeled with the capture date; tapping the date doesn’t do anything (only labels followed by a gray greater-than sign (>) are active links). Here, too, you can drag on the thumbnails to view a slightly larger preview of each image. 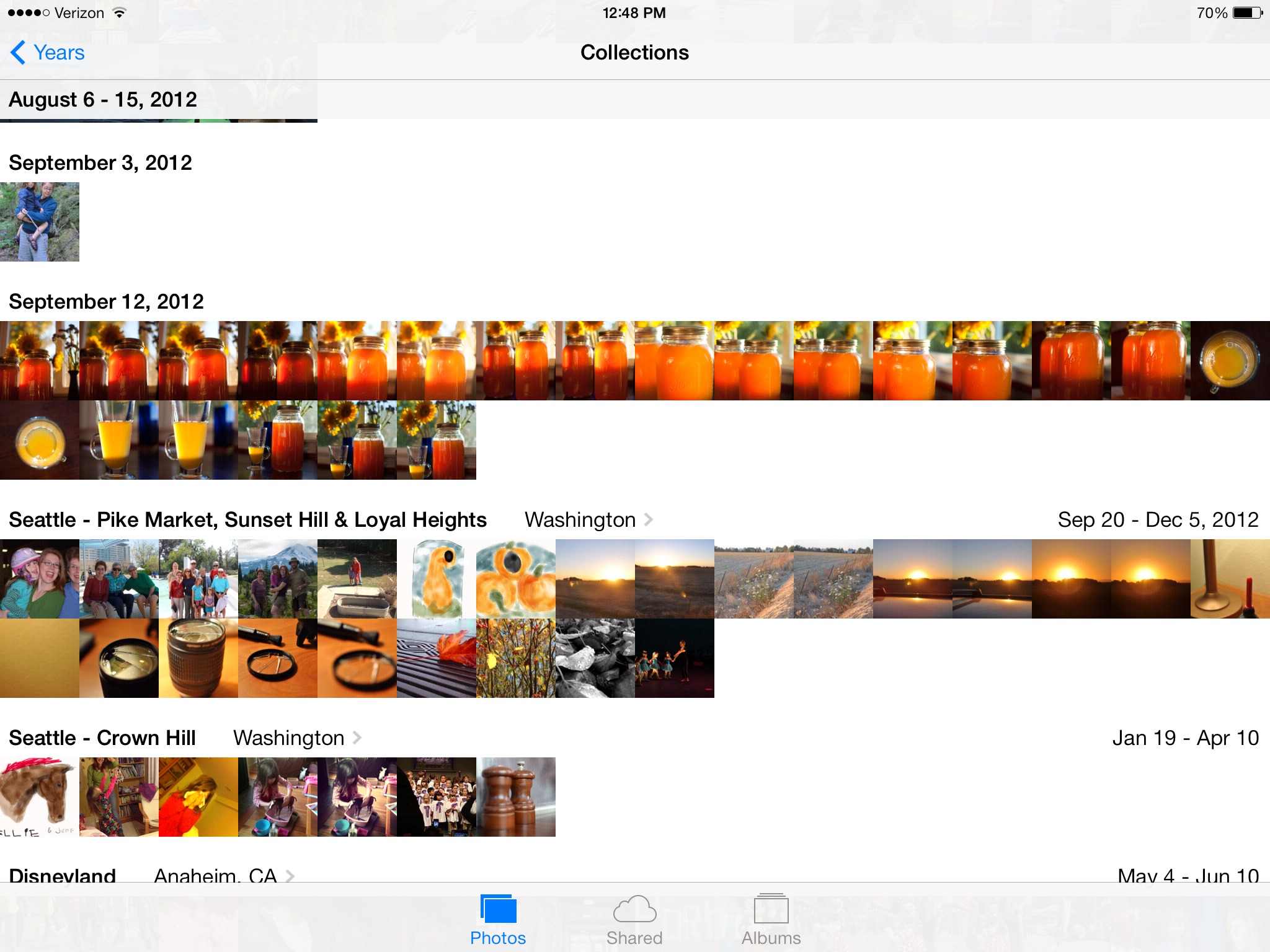 Collections are made up of Moments, which you access by tapping a group of photos. The Moments view presents more-coherent thumbnails; tap one to view the photo full screen. 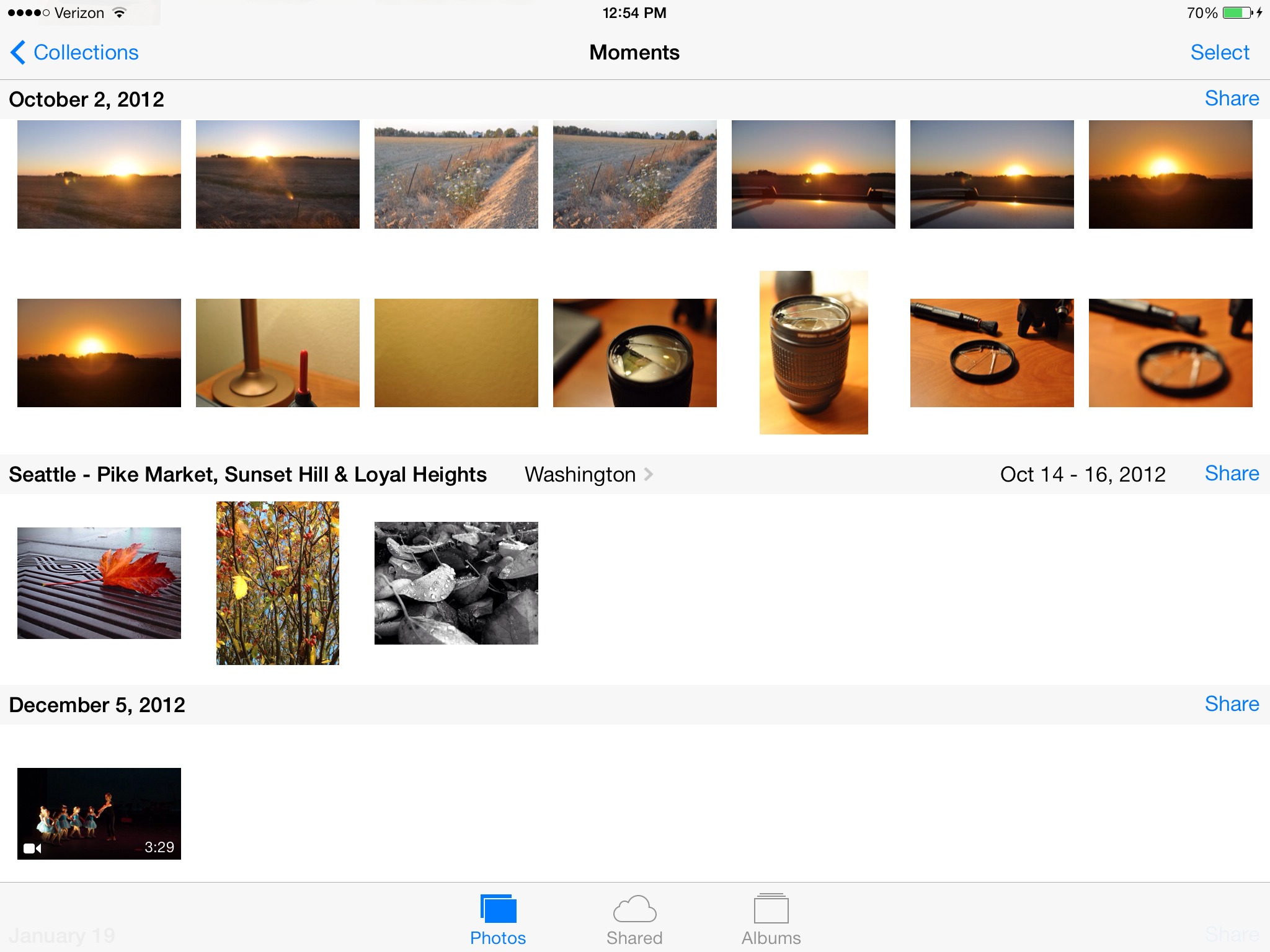 Initially the photo is partially obscured by the Photos app’s navigation at the top and bottom of the screen, but tapping once on the screen hides those bars. 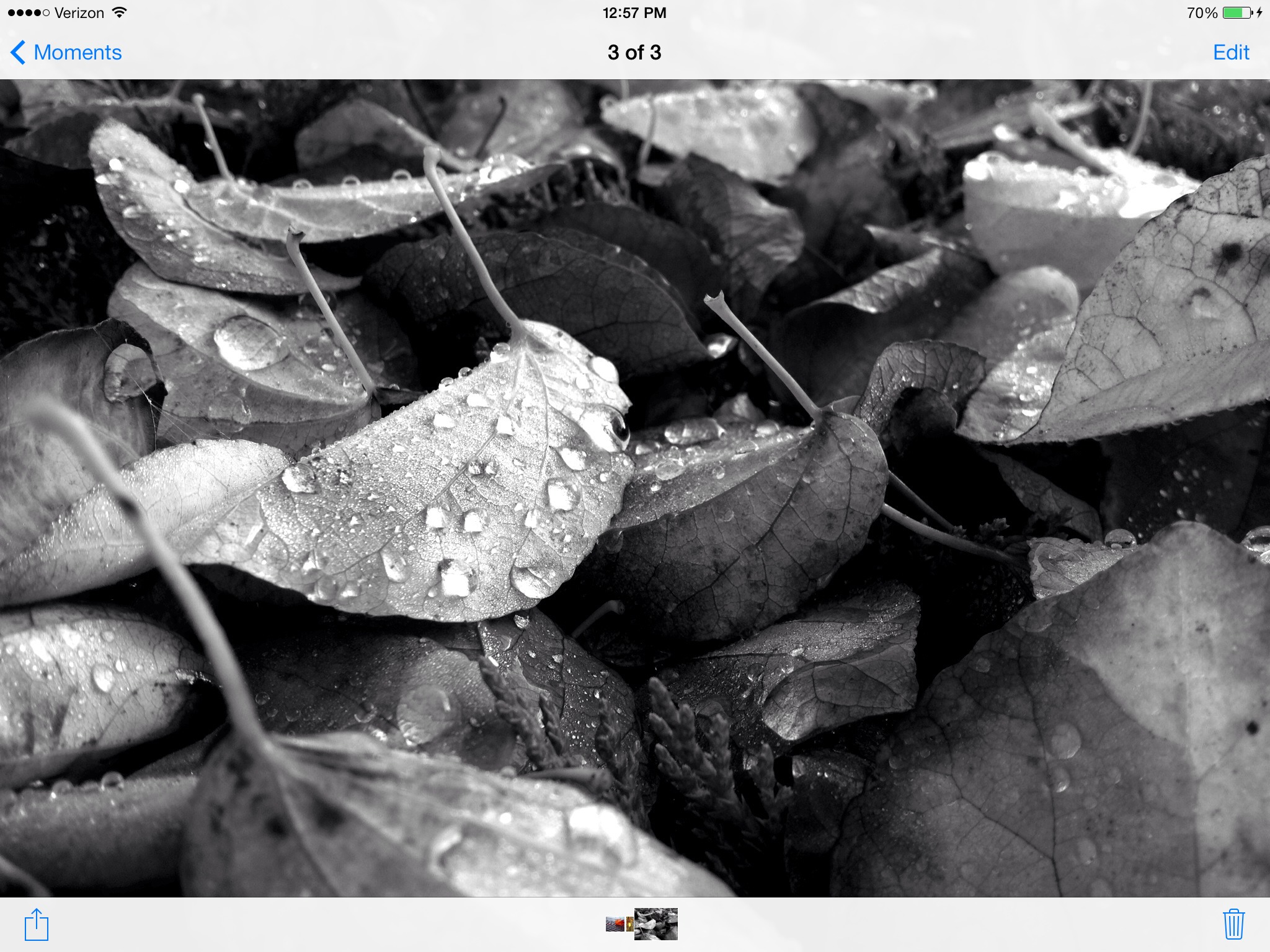 Photo Sharing — The Photo Stream tab in iOS 6 has been replaced by the Shared view, which features a new Activity feature: Anything you’ve shared, or items added to shared iCloud Photo Streams by others, appear in a scrollable view. It’s a nice addition, and reinforces the goal of having people like and comment on photos. 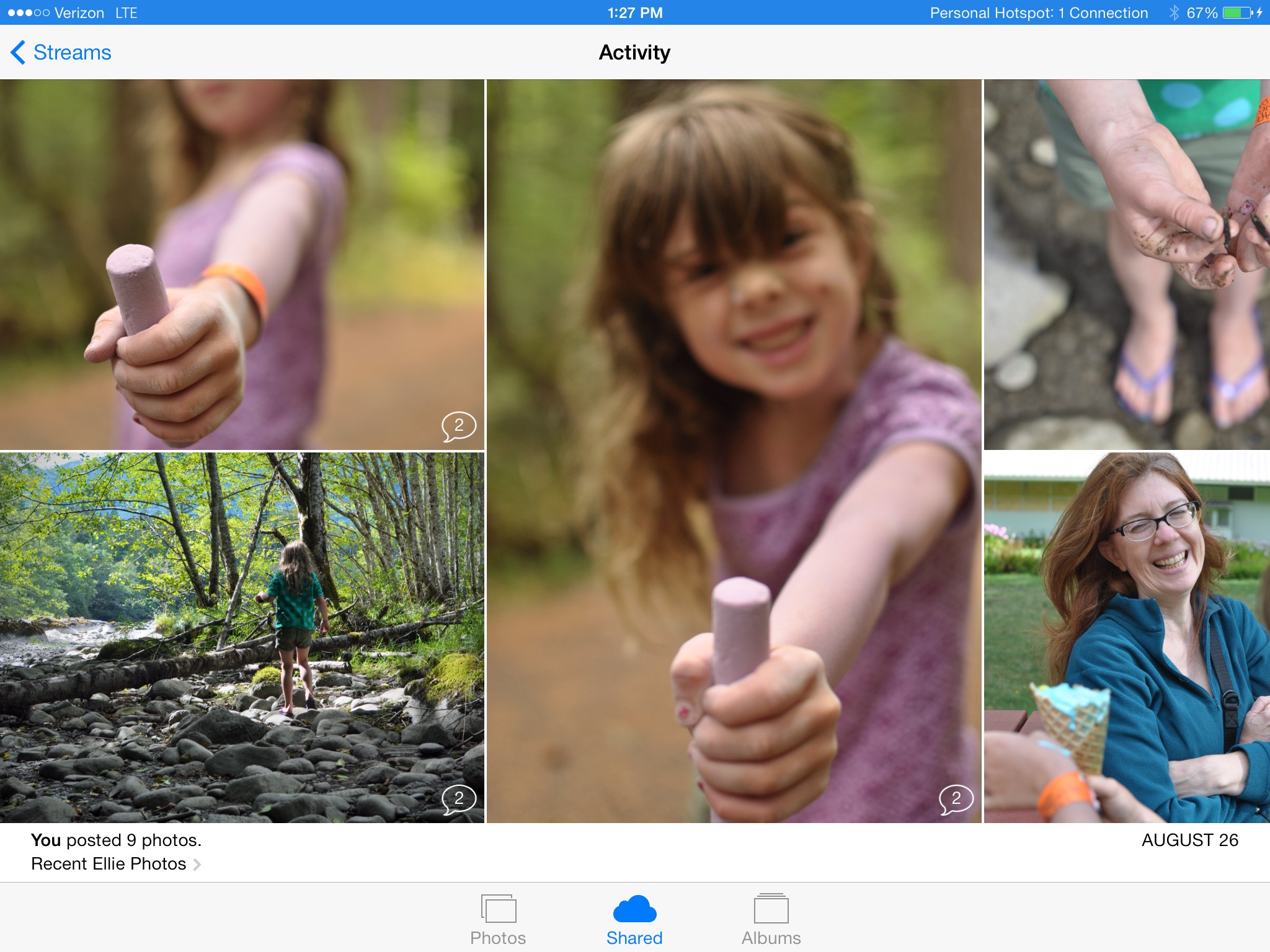 Tapping the Streams link in the top-left corner takes you to all photo streams you’ve shared or subscribed to.

As for sharing new photos, the mechanism in iOS 7 is mostly the same as in iOS 6, but with a couple of differences. The capability to select photos to share is available only in the Moments view: tap the Select link and then tap to select individual photos you want to share. iOS 7 also adds a Share link for every moment. Tap the link and choose to either Share This Moment (all images in the group) or Share Some Photos (individual shots from the group). Either way, the app presents you with iOS 7’s new popover for sharing via Messages, Mail, iCloud, Facebook, or Flickr (plus options to copy or print the items).

A Brief Aside about Slideshows — An iPad or iPhone makes a great presentation device for photos, so naturally the Photos app includes the capability to play an impromptu slideshow. (On the iPad, a Slideshow button appears in the Albums view. On the iPhone, you must select a photo within an album, tap the Share button, and tap the Slideshow button.)

However, I wish you could see my face as I type this, because I’m incredulous. After seven revisions of the operating system, the Slideshow feature is still hobbled by the fact that it can play only one song. You can opt to play music during the slideshow, but when you select the music from your iTunes library, you get to pick one song.

Look, I understand that playing slideshows with music probably isn’t an activity that people are clamoring for. But if you have a slideshow longer than a few minutes, the music feature makes no sense.

The Photos app slideshow feature has become my white whale, I’ll admit it. It’s the element I turn to with each release to gauge whether Apple is really paying attention to details. And for six years I can’t help wonder: What else are they overlooking? Well, besides some sort of library synchronization between iPhoto/Aperture and iOS devices so you could do some level of organization and editing away from your Mac. One major reason I say nothing about iOS devices in “Take Control of Your Digital Photos on a Mac” is because there’s no good way to work on your photo library on an iOS device.

For basic editing, the Photos app lets you rotate, crop, fix red-eye, and enhance (automatically adjust tone and color) an image. New in iOS 7 are filters, which, as I mentioned earlier, are notable for being able to restore a photo’s original look even if you shot the image originally with a filter applied. 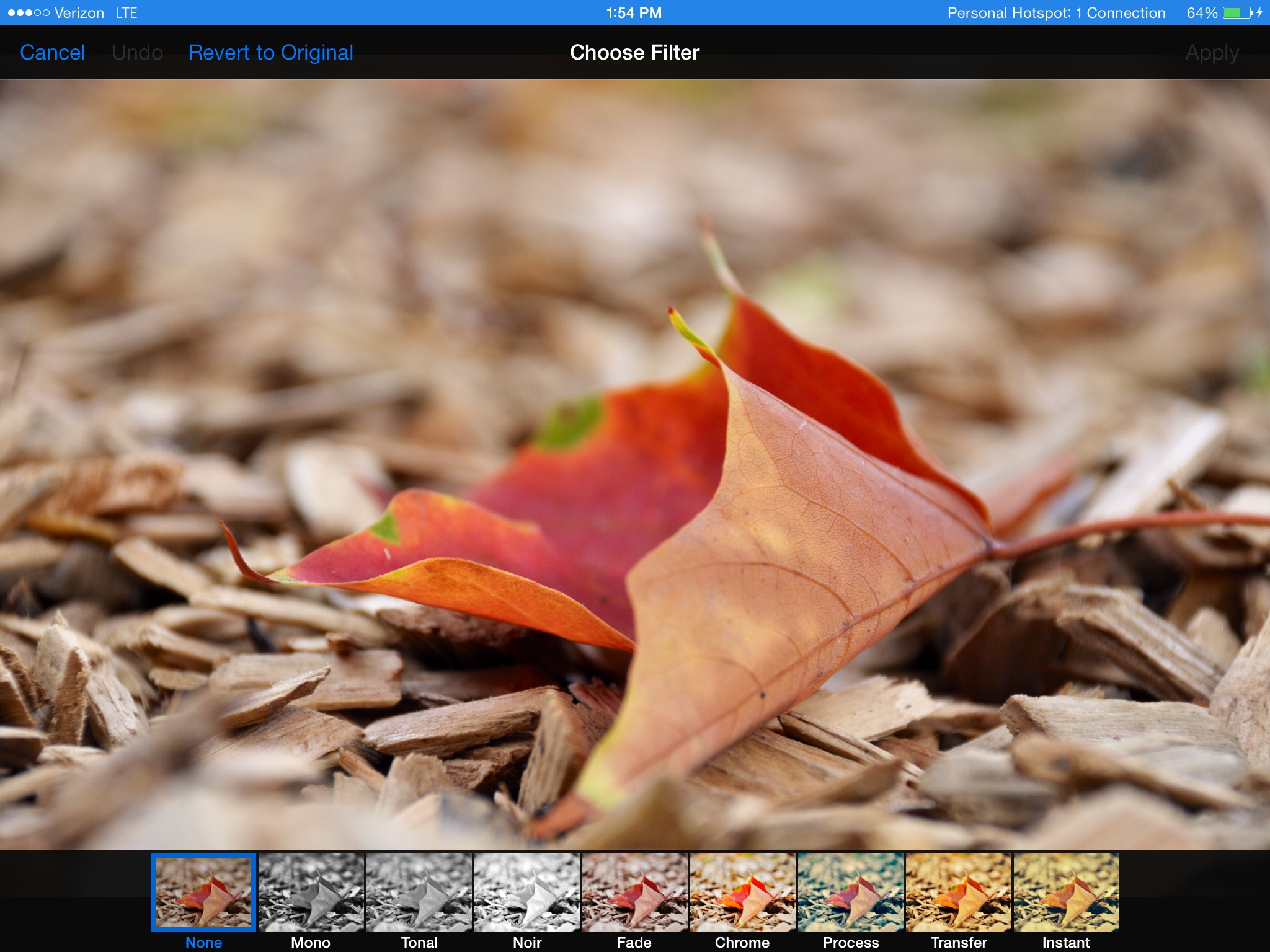 Photo Focused — The changes to the Camera app and the Photos app are designed to better anticipate how you browse images, and I think for the most part they’re successful. Instead of feeling regimented into different corners of the app, iOS 7 encourages you to dive into your library to pluck out the images you want. And, following the iOS 7 aesthetic, everything is clean, letting your photos (rightly) demand your attention instead of the app and its interface. Despite this, I’m sure the change will be disorienting at first for some people. As with the rest of iOS 7, though, it’s worth being patient and getting used to the new approach (not the least because nothing
you can do will change it).

Comments About Photos Get Renewed Focus in iOS 7