When Apple first announced iOS 7 at WWDC (see “Apple Unveils Completely Redesigned iOS 7,” 10 June 2013), a feature was listed on one of the SDK slides that was hardly touched upon in the day’s announcements: iBeacons. I’m not surprised that Apple didn’t say much about the feature to the press at the time, since iBeacons, unlike flashy new interface design, snazzy parallax effects, and helpful features like Control Center, is devilishly difficult to describe with a picture and five-word caption. The feature would have been lost in the noise. 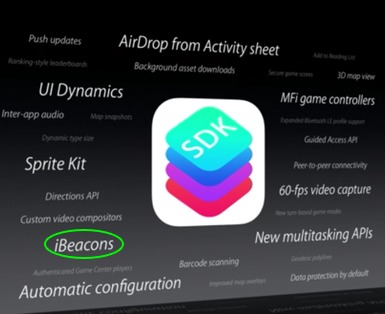 That’s ironic, because the point of iBeacons is to help you find things — or, rather, to help your iOS device to find itself. iBeacons is the general name for a set of additions to the Core Location framework that developers can use when designing apps: it isn’t a new piece of hardware, nor a new app, but a capability. Apps can use iBeacons to answer the question “Where am I?” not in terms of a location on a map, like GPS does, but in terms of where the device is relative to another device.
Specifically, where it is relative to another device acting as an iBeacon.

Think of an iBeacon as a tiny radio you can put almost anywhere. When your iPhone or other iOS device gets within range (a few dozen feet or so), it detects the iBeacon and can estimate how far away it is. Each iBeacon has its own identifier, too, so if your iPhone is within range of more than one iBeacon, it can tell them apart.

Here’s one thing you may be thinking: “Where do I get an iBeacon?” Look in your pocket: if you have an iPhone 4S or later (or a third-generation iPad or later), you already have a potential iBeacon. However, other companies are making standalone iBeacons, such as Estimote.

What makes iBeacons possible is Bluetooth 4.0, along with a Bluetooth radio that supports BLE — Bluetooth Low Energy. As the name suggests, the BLE flavor of Bluetooth is very battery-friendly: it can enable a dedicated iBeacon device to run for many weeks at a time without recharging or requiring a new battery.

Here’s another thing you may be thinking: Why should I care? Actually, you shouldn’t, just yet, unless you’re a developer who wants to create apps that could use fine-grained location awareness. Then you might care a whole bunch.

It’s easy to come up with examples where such a location-savvy app could be handy. For instance, a department store could set up iBeacons all over the place, and an iPhone app designed for that store could use those iBeacons to guide you to the location of items that appeared in search results. Similarly, a city library could distribute an app that guides patrons to specific books among the collections and even allow checkouts, or a museum could offer a tour app, or an airline could offer an app to help you navigate the airport (“Michael, your flight is boarding in 5 minutes at Gate 79, and you’re currently passing Gate 11.”). Or imagine a future version of Find My iPhone that could turn your iPhone into an iBeacon, so, when you
accidentally lose it in the couch cushions, you could wander around the house with your iPad mini or MacBook and play “Getting warmer… getting cooler… getting warmer again” as you search.

What makes iBeacons appealing to developers is that it is easy technology to exploit: your app simply has to tell the location service in iOS to watch out for iBeacons with a particular identifier, and then the app can sit in the background, consuming almost no resources or power, until an appropriate iBeacon comes in range, at which time iOS wakes the app up with the news. And iBeacons should be cheap technology to deploy: standalone iBeacon devices will start out costing less than $100 each, and the price may well drop significantly if the feature becomes popular: given the hundreds of millions of iOS devices out there already capable of using it, iBeacons has a good shot at popularity.

Here’s the bottom line on iBeacons: it can make your iOS device smarter about where it is, but you won’t notice it until developers start making use of the technology. Then your magical device will become just a little more magical.

Comments About The Promise of iBeacons in iOS 7