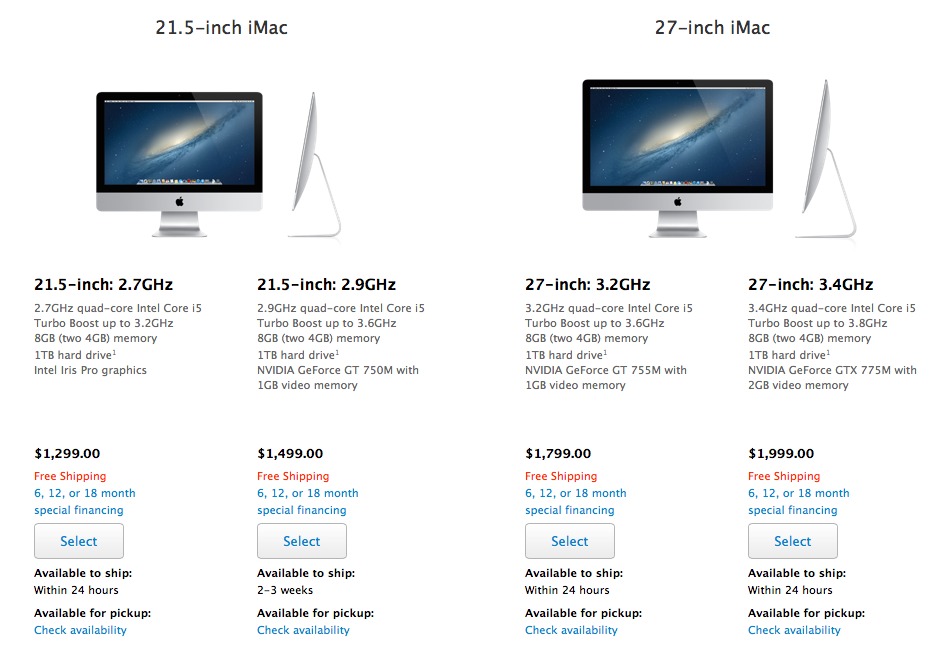 The base iMac model starts at $1,299 and features a 21.5-inch IPS screen with a resolution of 1920-by-1080, a 2.7 GHz quad-core Intel Core i5 processor, 8 GB of RAM, a 1 TB 5400-rpm hard drive, and Intel Iris Pro graphics. You may wonder how Intel Iris Pro stacks up to the Intel HD 4000 graphics processor found in newer Apple laptops. AnandTech ran comparison benchmarks, and found that the Iris processors are nearly twice as fast as the Intel HD
4000. To put things into perspective, the Intel HD 4000 is powerful enough to support the graphically intensive game BioShock Infinite (for a review, check out “FunBITS: In Praise of BioShock Infinite for Mac,” 6 September 2013). Integrated graphics have came a long way over the years.

The high-end 21.5-inch model, starting at $1,499, swaps in a 2.9 GHz quad-core Intel Core i5 processor and a Nvidia GeForce GT 750M graphics processor with 1 GB of video RAM. It has the same customization options as the base model, except it can also be upgraded to an optional 3.1 GHz Intel Core i7 for $200 more. If you want more RAM in one of the 21.5-inch iMacs, have it added when you order, since the RAM is not user-accessible. Both 21.5-inch iMacs retain the same clock speeds as their predecessors.

Overall, while these new iMacs are not a drastic change from last year’s models, the addition of faster CPU clock speeds, 802.11ac Wi-Fi, and more powerful graphics processors make the 2013 iMac lineup a welcome enhancement. Now if only you could replace a failed hard drive without a set of suction cups…