With the advent of the iPhone 5 and the new Lightning connector, Apple did away with its long tradition of offering docks for its pocket devices. However, in the face of falling profits (see “Apple Q3 2013 Results Repeat Higher Revenues and Lower Profits,” 23 July 2013), Apple has reentered the accessory market in a big way, introducing both official docks and cases for the new iPhone 5s and iPhone 5c (for my oh-so-brief look at the iPhone 5s Case, see “39-Word Review of the $39 iPhone 5s Case ,” 24 September 2013). The iPhone 5s Dock is backward-compatible with my
iPhone 5, so I decided to test it out.

However, there’s a new horse in the race. OK, there are a variety of horses milling around in the paddock, but none matches up to Twelve South, which makes some of the finest Apple accessories money can buy. Twelve South’s accessories match Apple’s aluminum aesthetics, with gorgeous products like the BackPack for iMac (an innovative storage shelf that attaches to the iMac’s stand) and our own Michael Cohen’s favorite, the BookArc for iPad (an elevated stand for the iPad). Twelve South recently introduced the HiRise
adjustable stand for the iPhone 5, iPhone 5s, iPhone 5c, and iPad mini. 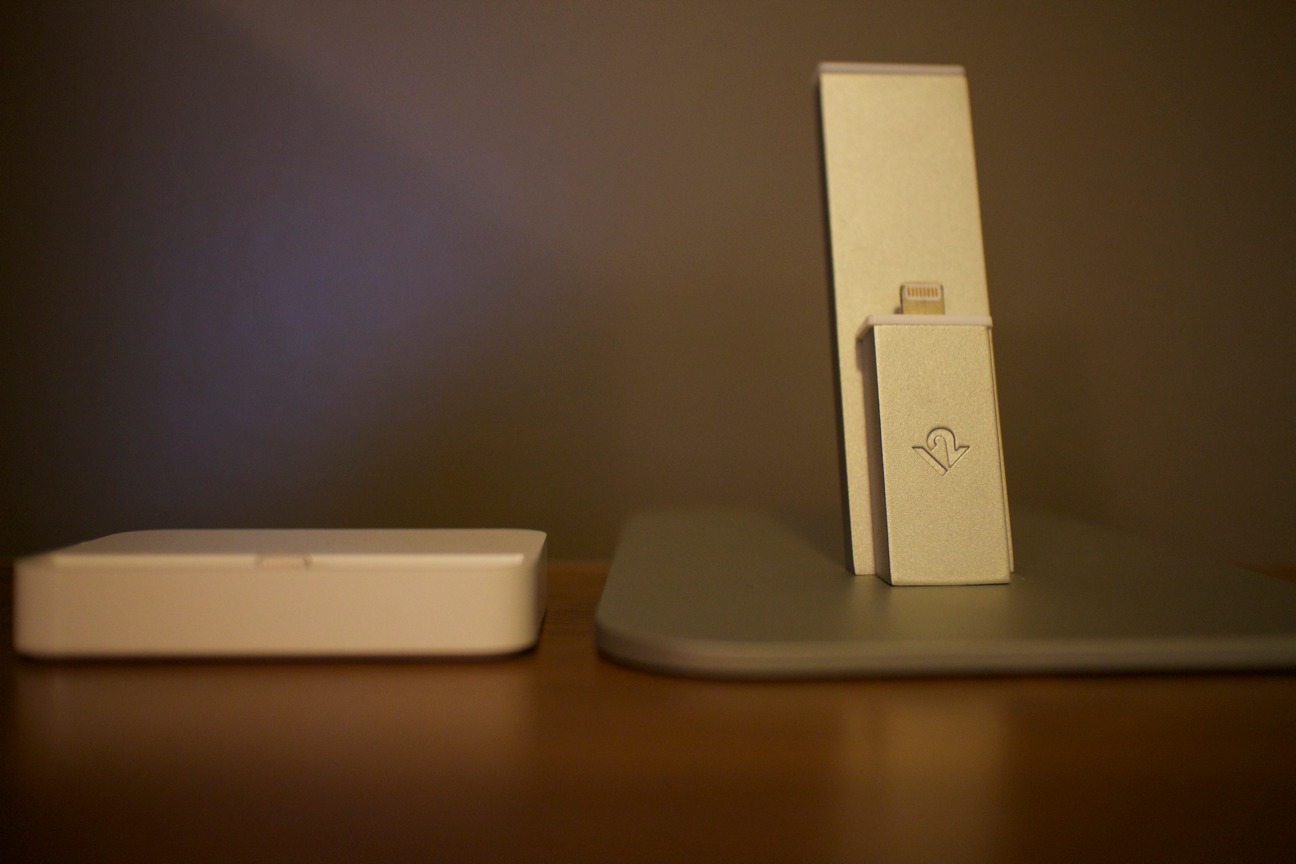 Apple’s iPhone 5s Dock is a tiny plastic rectangle. It measures less than 2.5 inches (6.35 cm) long and less than 1.75 inches (4.45 cm) wide. To use it, just plug a Lightning cable (not included) into the back. If you’re feeling fancy, you can connect a powered speaker to the dock’s line-out port. Just set your iPhone in the dock and you’re done.

Unless your iPhone is in a case, that is. The iPhone 5s Dock is perfectly fitted to the iPhone, so it’s not compatible with even Apple’s official case. This has always been a problem with Apple’s docks, but you’d think the company could have come up with something better after taking a year off.

Twelve South’s HiRise, on the other hand, will accept your encased iPhone, your iPad mini, and just about any gadget that’s small enough with a Lightning port on the bottom. However, with great flexibility comes great complexity. The HiRise is less of a dock and more of a hobby kit.

When you open the (quite nice) HiRise packaging, you don’t have a dock, but rather a dock construction kit, with all the parts you need. There’s a front support, a rear support, a base, a plastic base cap that holds a hex key, four hex screws, and three Lightning cable clips. As with Apple’s docks, a Lightning cable is not included (though that’s probably best, given reports that iOS 7 refuses to work with unofficial Lightning cables). 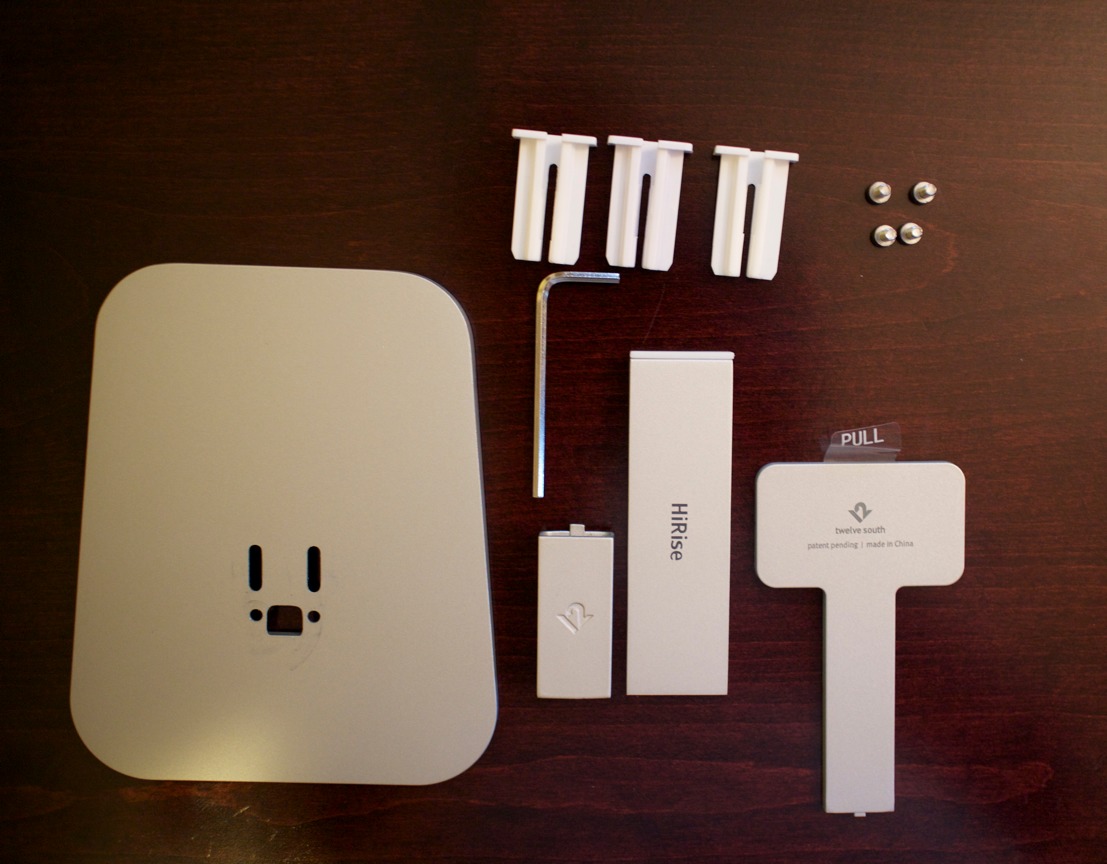 Assembly isn’t easy, and the instructions aren’t much help. The tricky part is screwing the front support to the base, as it attaches at an angle. So you’re trying to hold two small, angled, aluminum parts together with one hand, as you insert and tighten tiny hex screws with the other. The instructions say to thread the Lightning cable through the front support before assembly, but I found it much easier to assemble first and thread the cable through later.

Once the front support is attached to the base, and the cable is threaded through, you have to attach it to the top of the support with one of the included clips. One clip is for naked iPhones, another for thin cases, and the last for thick cases. The clips insert into the front support only one way, and it’s easy to put them in wrong. And Cupertino help you if you do, because if you insert the clip wrong, it gets jammed and is a pain to remove.

You then have to insert the rear support and screw it to the base via two long holes in the bottom of the base. It’s hard to keep the screws in place. However, the elongated holes make it possible to slide the rear support forward or back to accommodate different case thicknesses. Finally, you clip the Lightning cable into a channel on the bottom of the HiRise, and cover it with the base cap.

There’s no easy way to free your Lightning cable. While you can just unplug the cable from the back of Apple’s dock, with the HiRise you have to unclip it, then route it out of the bottom of the base.

It took me about thirty minutes to assemble the HiRise, and I used to work in machining and sheet metal fabrication! But once assembled, the HiRise is quite attractive, though at about 4 inches (10.16 cm) wide and 5 inches (12.7 cm) long at its widest, it takes up more desk space than the iPhone 5s Dock.

If I were to suggest an improvement for the HiRise, it would be to ship the unit preassembled. That would double the size of the packaging, but would present a much better user experience. I’d also replace the hex screws with thumb screws, removing the need for the included hex key and base cap.

So which dock is more stable? Although you might think the tall HiRise would be less stable than the iPhone 5s Dock, the HiRise’s larger, heavier, aluminum base provides much more stability than Apple’s tiny plastic dock.

How about the Lightning connection? On the HiRise, the iPhone sits on the front support, which is only about 0.63 inches (1.58 cm) wide. It’s easy to nudge the iPhone in such a way as to lose the connection. I thought with its wider support, the iPhone 5s Dock would provide a better connection, but I was wrong, as it’s just as easy to knock the iPhone connection loose in Apple’s dock. Turns out, Lightning, while it can be used in a dock, just isn’t meant for docking.

The irony is, while it’s all too easy to disrupt the Lightning connection, it’s actually quite difficult to remove the iPhone from either dock. Forget about just lifting it off the dock with one hand; you need to hold either dock down while you lift up on the iPhone. However, with a little practice, you can remove the iPhone from either dock with one hand. For the HiRise, the trick is to push down on the rear support with your middle finger as you pinch and lift the iPhone with your thumb and forefinger. On the iPhone 5s Dock, I press down on the dock with my pinky (like a gentleman) while pinching and lifting the phone with my index and middle fingers and thumb. I find it easier to remove my iPhone from the HiRise, as the rear
support offers a platform to push against.

Finally, what about audio and call quality? Apple and Twelve South take very different approaches. The Apple dock covers the bottom speaker and microphone, so Apple employs “special audio porting” to enhance the sound. Basically, the dock is sufficiently concave to apply a slight amplification — similar to inserting an iPhone in an empty glass. The HiRise instead puts the iPhone on a narrow-enough base so as to not cover the headphone jack, microphone, or speaker.

I tried a speakerphone FaceTime Audio call with TidBITS publisher Adam Engst, and he couldn’t discern any difference in sound quality between the two docks. On my end, the Apple dock was slightly louder, but it wasn’t a significant difference over the HiRise.

A clever aspect of the HiRise’s design is that it not only leaves the headphone port uncovered, but also offers enough clearance to insert and remove a headphone jack. The iPhone 5s Dock doesn’t technically support headphones through the line out jack, but I plugged in a pair of EarPods and they worked fine, with a notable caveat: the in-line remote controls were disabled, and I wasn’t even able to adjust the volume with the iPhone’s buttons.

In the end, the Game of Docks is a draw. Neither dock is especially useful, since the Lightning connector isn’t suited for docking. When you can’t quickly and easily remove the iPhone, much of the utility goes out the window. However, both docks make a nice throne for your iPhone, and keep the cable in place.

Which one is right for you? If your main reason for having a dock is to connect it to a wired speaker quickly, and you don’t use a case, then the iPhone 5s Dock is the way to go. Otherwise, the Twelve South HiRise is the better choice. Yes, it’s annoying to assemble and adjust, but that design almost guarantees that you’ll be able to use it for the entire life of the Lightning connector. At $34.99, it’s a bit more expensive than the $29 iPhone 5s Dock, but it’s constructed of nice aluminum instead of plastic and plays nice with headphones.

Comments About A Game of Docks: Apple Versus Twelve South