This week, we’ve heard from a number of visually impaired users who are having difficulties with iOS 7 (see “Peering at iOS 7 for the Vision Impaired,” 19 September 2013, and “iOS 7 Animations Cause Nausea for Some,” 25 September 2013). We feel terrible about that, but I became excited when I discovered Vanished, a unique game for iOS that even the most visually impaired can enjoy (with a caveat). Better yet, it’s free until 1 October 2013.

In Vanished, your character wakes up in complete darkness, able to navigate only by directional audio clues. The object of the game is to wander around each level until you find the exit, which is marked by chiming. It’s a little like the 1982 Haunted House game for the Atari 2600 — perhaps the first example of the survival horror genre.

Vanished requires headphones — Apple’s EarPods work nicely here. To walk forward, you hold a finger down on the screen, and you rotate your body to change direction — a clever use of the iPhone’s compass and a nice alternative to most 3D games, where you press an analog stick in the direction you’d like to go. 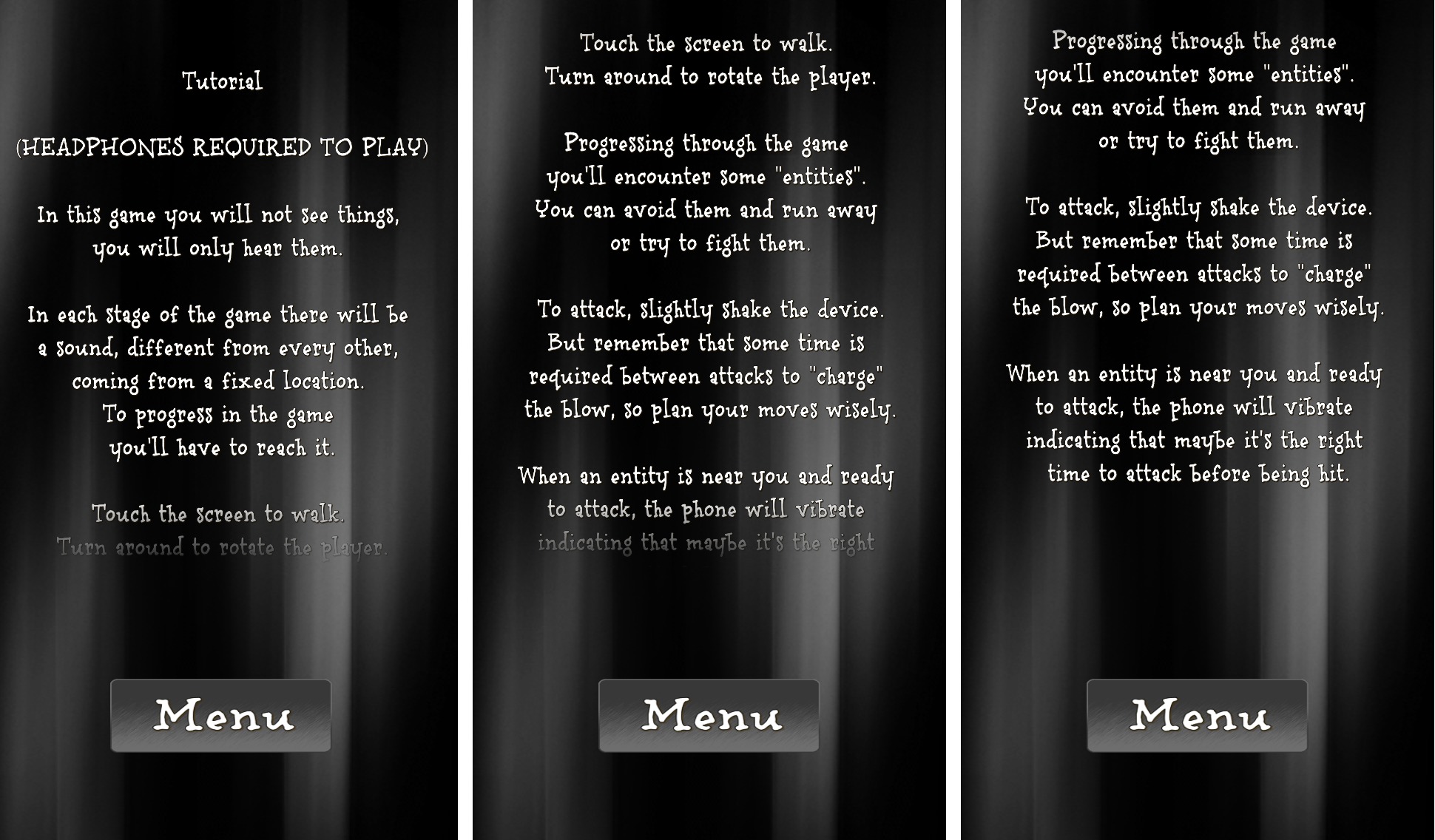 To navigate, you rotate until you hear some kind of beacon sound in front of you, perhaps a police radio or creepy whispers, then press your finger on the screen to walk toward it. Along the way, you’ll pass by other creepy sounds. Sometimes you’ll hear heavy breathing, laughing, or grunting, indicating that a monster is close.

Monsters? Yes, and unfortunately, combat is where the game falls flat. Your phone vibrates when a monster is about to attack. You can either run in the other direction, or shake your phone to attack (hold tight!). I suggest you run, as the combat is unforgiving. One wrong stab in the dark, and you’re dead. Some additional guidance would be welcome here. But there’s no shame in running; after all, the goal is to escape anyway.

Vanished is an interesting take on gaming, and definitely worth checking out if you normally avoid games in part because of their reliance on visual effects. I think it could be a blast at Halloween parties. Put your friends in a dark room with the game and listen for the screams!

But there’s one big oversight in Vanished, as pointed out to me by reader Moof: the game’s menus don’t support VoiceOver, so it’s difficult for a blind user to start the game. Considering the audio-based gameplay, this is a weird omission, and one I hope is fixed soon.

From Vanished to Daredevil — Despite its flaws, Vanished is a fun concept piece that’s worth checking out while it’s free. I’ve long been fascinated by the idea of an audio-only game — “The Hitchhiker’s Guide to the Galaxy” author Douglas Adams was reportedly working on one before he passed away. This base idea could be developed into something great.

Take the Marvel Comics crime-fighter Daredevil, for instance. Also known as attorney Matt Murdock, Daredevil was blinded by radioactive chemicals, which robbed him of his sight, but gave him super-powered senses. Daredevil can hear and identify an individual heartbeat from a block away and even tell if that person is lying. He also uses a special “billy club” — a cane that breaks into two pieces, with a long length of cable that he uses to beat up thugs and swing between buildings. It’s kind of like a nunchaku on steroids.

Now, imagine a Daredevil iPhone game, if someone were to build on Vanished’s concepts. You raise your phone until you hear a “tink” indicating a grapple point for your billy club. You flick your iPhone at it, and swing up to a rooftop. You hear fighting in the distance. You press on the screen to run toward the sound. As you get close, you aim your phone in the direction of the fight and hear five heartbeats. All are beating fast, but one is clearly in a panic. Someone’s being attacked! You aim your iPhone at one of the attackers and flick to throw half of your billy club at him, catching him by surprise. One down.

You press down on the screen to close in on the thugs. You sense an attack coming — your iPhone vibrates — and you quickly shake it to knock the second hoodlum unconscious. You aim the phone and rotate around until you hear the heartbeat of a third attacker, who’s staying just outside of reach. You shake the phone to leap across the roof and deliver a flying kick to his head. You hear the final punk run off, and you go to check on the victim. He’s bruised, but he’ll be OK. However, something’s odd, you can sense that there’s something he’s not telling you…

I can also imagine a visual replay, where you can see (and hear) your fight again, so you can learn what new sounds mean and perfect your skills. And, let’s face it, as cool as an audio-only game is, some slick graphics would still be appreciated by those who can see them.

I’m not a developer, but if that sounds as awesome to you as it does to me, go bug Marvel until they make it. In the meantime, check out Vanished, which hints at the potential of the iPhone for visually impaired gamers.

Comments About FunBITS: Even the Blind Can Play Vanished