Apple’s iOS 7 brought with it a new interface, numerous under-the-hood improvements, and updates to core apps. It’s a huge change from iOS 6, perhaps the most significant update to iOS ever. Unfortunately, it’s impossible to make such sweeping changes without causing some consternation.

We’ve written about how iOS 7 interface choices have caused problems for people with certain visual impairments (“Peering at iOS 7 for the Vision Impaired,” 19 September 2013), and how its use of depth and movement can induce motion sickness for others (“iOS 7 Animations Cause Nausea for Some,” 25 September 2013). Those troubles are side effects of intentional design decisions, but here I want to focus on other problems we’ve experienced with iOS 7 that are wholly unintentional — just plain bugs. These bugs are far from universal, but they have affected both us and other iOS 7 users, and are worth watching for in your use.

Crashes Under Low Battery — On my iPhone 5 running iOS 7, I’ve experienced a number of full-device crashes, where the iPhone screen shows a white spinner on a black screen, then goes dark. Although I was once able to restart the iPhone, only to suffer another crash nearly instantly, the iPhone usually reports that it’s out of power, and won’t restart until I plug it in.

The common element in these crashes is low battery life, usually under 20 percent, although one crash occurred at almost 30 percent. When I give the iPhone power, it restarts immediately and shows the expected amount of battery life remaining. So it’s not that the battery is actually running out; instead, iOS 7’s power management code is freaking out once the battery level falls to around 20 percent. I do see a number of LowBatteryLog files in Settings > General > About > Diagnostics & Usage > Diagnostic & Usage Data, though their contents don’t reveal a smoking gun. Letting the battery run down completely and then recharging entirely to recalibrate it made no difference.

I’ve heard a few other reports of this problem from TidBITS staffers and people on Twitter, but I don’t believe it’s terribly widespread, perhaps because most people don’t let battery life drop so far regularly. The main concern is that, as we have come to rely on our iPhones for important tasks like GPS navigation in unfamiliar areas or just-in-time access to essential documents like boarding passes in Passbook, having your iPhone crash and refuse to restart toward the end of a long day could be troublesome. One of my crashes came while asking Siri for directions to an appointment at a location I’d never visited before. Luckily, it was in Ithaca, and I had a general idea of the area, so it wasn’t problematic, but if I had
lost GPS capability or access to Passbook late at night while travelling, I would be very unhappy.

My advice? Until we see an update to iOS 7 that might fix this problem — iOS 7.0.3 is rumored to be coming soon — bring charging hardware or an external battery whenever you anticipate being in a situation where your iPhone battery could run low.

Messages in the Mist — Another area where I’ve come to rely heavily on the iPhone is Apple’s iMessage system. Now that Tristan is in high school and needing pickups from cross-country practice and meets, we use Messages to communicate and coordinate. A few days ago, Tonya sent me a message and I replied, but didn’t receive a response. When she got home and we resumed the conversation, it became clear that she had no idea what I was talking about. And indeed, the messages I had sent were not on her iPhone.

The messages were clearly on my iPhone, though, so we chalked it up to cosmic rays. The next day, while I was out of the house, I needed to communicate with Tristan to find out whether or not to pick him up. My message to him didn’t get a quick response, and when I pinged Tonya to see if she knew more, I didn’t hear back from her either. That’s when I noticed, at the top of the Messages screen, the text “Sending 1 of 3.” That’s right, even though I had connectivity, the messages weren’t being sent. In fact, it was still trying to send Tonya the messages from the previous day, without having displayed an error message.

Force-quitting Messages from the multitasking screen made no difference, so I restarted my iPhone, after which the messages appeared with red exclamation points and the Not Delivered tag. Tapping the exclamation point let me resend the messages, just in time, and everything worked out well. Obviously, had this been an urgent situation, I could have called, but since iMessage has generally been reliable, I didn’t even notice the failure for a day, and could easily have missed the Sending message. 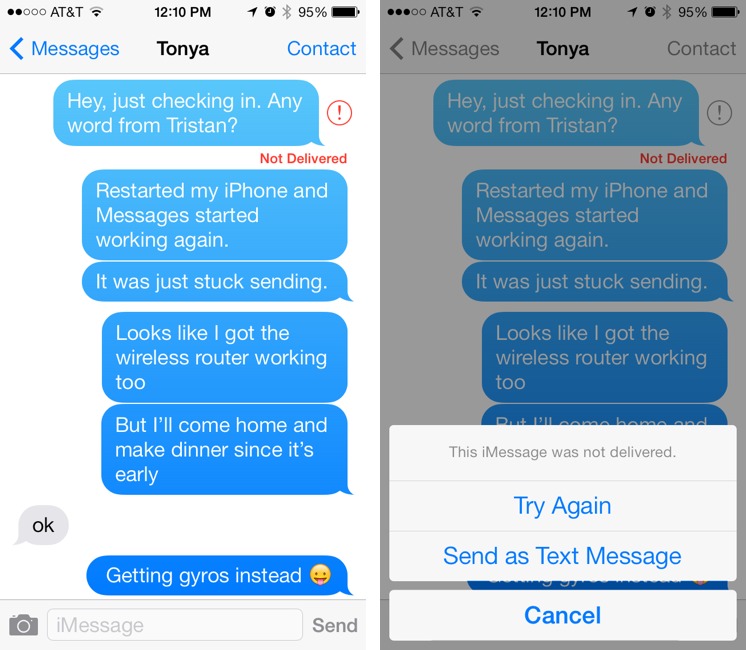 I believe this problem is somewhat common, from various discussions on the Apple Support Communities. The symptoms vary a bit, with some people getting Not Delivered messages even though the messages are being sent, but it’s clear that there are issues. In a statement to the Wall Street Journal, Apple has acknowledged
the problem and promised a fix.

Until Apple addresses this problem, the workaround is to pay attention to the top of the Messages screen, and if it gets stuck on Sending, restart your iPhone. In general, it’s also good to acknowledge messages that contain important information, so the sender knows they were received — that took some training with Tristan.

Siri, Are You There? — Less firm are the problems I’ve experienced with Siri in iOS 7. At times, Apple’s servers are clearly having trouble, since I’ll get a message back from Siri telling me to try again later. And other times, I’ll say something to Siri and just get no response back at all — or at least no response in the amount of time I’m willing to wait before I perform the action manually. All this started when I began using preview builds of iOS 7 — under iOS 6, I’d become quite fond of Siri.

My anecdotal experiences have been matched by some people posting on the Apple Support Communities, but still others have said that Siri is working better for them in iOS 7 than in iOS 6. As a result, I’m less comfortable saying this is an actual bug in iOS 7, but one way or another, Siri will be losing users.

Why? Just as with the previous two problems, it comes down to trust. When you can’t trust Siri to work some significant portion of the time, you stop trying. I’ve already noticed that in my usage — I don’t even think about using Siri in situations where I would have in the past.

Who’s Playing That Audio? — Our final concern with iOS 7 revolves around audio, and reveals a couple of bugs and a design mistake. Matt Neuburg isolated this problem when he turned on his Bluetooth wireless headphone and started to hear audio. He didn’t want to listen to what was playing, so he opened Control Center and tapped the pause button, but to no effect. The name of the audio track appeared, but without an icon; it was impossible to tell what app was producing it. Further investigation with Mocha iSys revealed that the KCLU app was running, even though Matt had explicitly forced it to quit from the multitasking screen earlier, and stranger yet, the KCLU app didn’t appear to be active at all.

The first bug is that it seems possible for some action (an inadvertent press on a Bluetooth headphones button, perhaps related to the fact that Matt had force-quit the KCLU app earlier?) to relaunch an app that isn’t running. Connected to that is the second bug, that the relaunched app doesn’t appear on the multitasking screen. Third, the audio controls in Control Center don’t work reliably. And finally, unlike the audio controls in iOS 6, Control Center gives no visual indication of what app is producing the sound.

We actually understand the third bug involved, because it hits close to home. Our own TidBITS News app can play the audio versions of our articles, but under iOS 7, Control Center’s audio controls don’t work with it. It turns out that apps that play audio must be rewritten to support iOS 7, although it still seems like a bug for Control Center’s audio controls to fail with older apps.

While writing this piece, I also discovered the trick that Matt needed to identify the KCLU app. Although Control Center doesn’t show the name or icon for the app playing audio, if you double-tap the track name, the appropriate app opens. This does not work from Control Center on the Lock screen, though. And even if you can’t stop or identify the audio, another workaround is to play audio from another app, like Music, which takes over and enables Control Center to operate properly again.

Apart from that tip, the takeaway from Matt’s story is to look for updates to older apps that play audio. It’s impossible to say more about what might have caused the KCLU app to relaunch spontaneously, but should you see something similar, let us know in the comments.

In the meantime, hold tight and wait for iOS 7.0.3, and we’ll hope that Apple addresses these concerns.