Rogue Amoeba is the king of Mac audio tools, and we love them for it. Most of us record our articles with their Audio Hijack Pro and edit with Fission. In fact, Audio Hijack Pro is one of my favorite Mac utilities, as I often use it to record Skype calls. And there’s a special spot in my heart for Airfoil, which lets me send audio to my stereo or Apple TV via AirPlay from apps like Rdio, not just iTunes.

But when Rogue Amoeba released the $15 Intermission, it took me a while to wrap my head around its possibilities. Intermission is like an audio TiVo for your Mac. It continuously buffers the last three hours of audio, and lets you jump back at any time, while continuing to buffer. You can also pause live audio, and move forward through cached audio to skip ads.

Intermission is a simple app that resides in your menu bar. Click its icon and you can use the scrubber to move backward and forward in time. The Jump Back and Jump Forward menu items skip forward or back 10 seconds, a length of time you can adjust. Choosing Jump to Live brings you back to live content. And if you prefer using the keyboard for all these features, you can set keyboard shortcuts for everything in Intermission’s preferences. 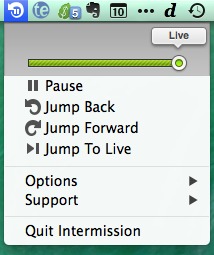 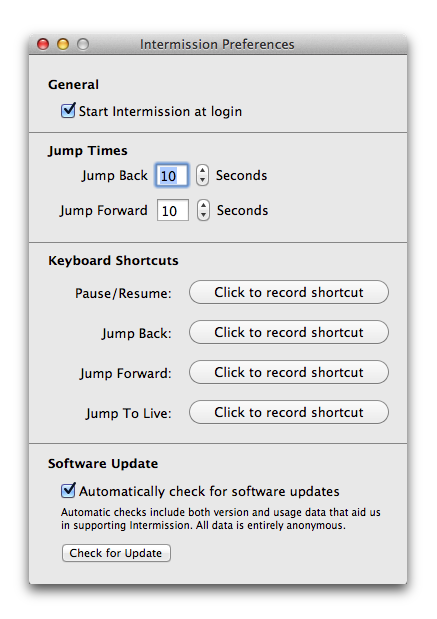 My first use of Intermission was to pause and skip back in live podcast streams, such as the ones I listen to through the 5by5 Radio app. At last I can pause a live broadcast when the phone rings or I
need to use the bathroom!

Intermission is also a useful addition to Apple’s new iTunes Radio service, which I love (to see why, read “FunBITS: Tune into iTunes Radio,” 18 September 2013). But the problem with services like iTunes Radio is that they don’t allow you to listen to a particular song again. With Intermission, I just slid the scrubber back and listened again.

Another trick is to let iTunes Radio play while you’re away from your Mac. Then, when you come back, you can listen to the prerecorded stream, skipping back and forth as you desire.

What made Intermission click for me is when I forgot to record a Skype call in Audio Hijack Pro. It suddenly dawned on me that I could open Intermission, pull back the scrubber, and review the parts I had forgotten. Unfortunately, Intermission doesn’t record input, only output, so I could only listen to the other side of the conversation — my part was missing. I’d love to see the capability to record both input and output in a future release.

It would also be interesting if a future version of Intermission enhanced the visual display of the recorded audio, indicating when no audio was playing and showing which app was responsible for different chunks of the recording. That would make it easier to scrub through and find specific bits.

Sometimes Intermission can cause confusion, because live audio keeps “playing” even as your scroll back in time — it’s just recorded to disk instead of being played through your speakers. That’s certainly the correct behavior, but in some cases, you may want to pause the currently playing audio before skipping back in time, so when you jump back to the present, you don’t have to try to find the right spot to start from again. Another small downside of Intermission is that it uses quite a bit of power, so it would be best to quit the app if you need to extend battery life on a long airplane flight.

But, for only $15 (with a free trial), Intermission is a great app to keep running, since you never know when it’ll come in handy. And if you’re a TidBITS member, you’ll receive a 20 percent discount, just as you do for every Rogue Amoeba product!