Halloween is fast approaching, so it’s time to try to scare ourselves silly with horror movies, haunted houses, children dressed as Miley Cyrus, and spooky video games. On iOS, I can’t think of a better Halloween game than Limbo, an independent platform game that originally debuted on the Xbox 360 in 2010. Limbo has since come to Playstation 3, Windows, Mac, and a few months ago, iOS. It costs $4.99 in the App Store and is universal for iPhone and iPad.

In Limbo, you play an unnamed boy who travels to the edge of Hell to find his sister. It’s a side-scrolling platform game, but you won’t be jumping on enemy mushrooms or battling flying turtles here. Instead, Limbo is more focused on solving puzzles than combat. Even when you fight a giant spider, it’s more of a series of interconnected puzzles than a traditional video game duel.

Limbo is a dark game, both literally and metaphorically. The game is entirely grayscale, covered by film grain, with heavy emphasis on black — the protagonist is solid black, with only white dots for eyes. But the style works, and it’s one of the most beautiful games I’ve seen. The Mac version won an Apple Design Award in 2012.

The darkness sets Limbo’s creepy tone, and helps tone down the gory deaths. Usually when you die in the game, it’s by some sort of dismemberment. One second, you’re asking yourself if that tree has claws, the next you’re watching helplessly as your character is being torn limb from limb. If anything, the black-and-white color palette makes such deaths all the more surreal. 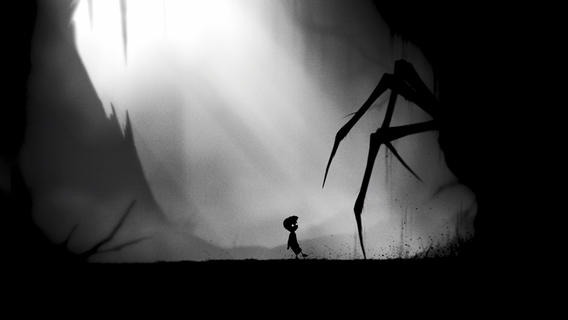 Perhaps even more impressive than the visuals is how well the controls have been translated for touch. You won’t see any lousy onscreen directional buttons here. Instead, you control everything through swipes. Swipe your left thumb to the right and hold it to move forward, and swipe with your right thumb to jump and climb. It’s simple, elegant, and responsive.

So if you’re looking for a good scare for Halloween, Limbo might just be the nightmare you desire, in addition to being a game that makes you think about every move. It’s a fantastic port of the original, and the developers have raised the bar for touchscreen platform gaming controls.