I’ve always tried to maintain good financial discipline. Life is a lot easier when you spend less than you make, so budgeting is the cornerstone of that commonsense strategy.

But I’ve never cared for most ready-made budgeting systems. My usual complaint is that they split my spending up into too many pointless categories. Yes, I’d like to set aside some money for groceries, but I don’t care to calculate how much I spend on croutons every month. For that reason, I set up my own budget spreadsheet to track the few categories that made sense for me, and kept up with how much money was available for each.

That worked well for years, but required me to keep track of receipts and manually input how much I spent on things, which was time-consuming. It became more difficult to keep up once I started freelancing on the side, and after I got married, it became untenable. There was no way I was going to ask my wife to keep every single receipt and enter it into a spreadsheet. Now that our first child is here, the idea is even more laughable. I’m lucky to eat dinner and stick to my deadlines most nights — never mind punching all my receipts into a spreadsheet.

To get at least some kind of a grip on my financial life, I turned to Intuit’s Mint service, which ties into your various bank accounts and promises to budget automatically. But like most budgeting systems, Mint splits things up into too many categories. I don’t care about my clothing or entertainment budgets, because those are things I worry about only after monthly bills, gas, and food. And Mint is particularly bad with automatically categorizing my purchases. Anything you buy from a gas station is counted against your gas budget. Bought a Mountain Dew and a Snickers at the corner Speedway? Mint doesn’t see those as groceries, because it thinks they’re gas. A bag of ice, a hot dog, and five
gallons of gas? That’s all gas. Emergency aspirin? That’s also gas. You get the idea.

Sure, Mint would probably be a lot smarter if I took the time to train it, but if I had time for that, why would I use Mint? Ultimately, I wanted something simple that would let me know how much I have to spend after the essentials are paid for.

Level Money for iOS, which is free in the App Store (the company is funded by venture capital), promises to be that app. It tosses out categories entirely. You enter your income and the bills you pay every month, set a percentage of income you want to save, and Level Money does the rest. Like Mint, it manages access to your online bank accounts through Intuit’s backend so everything is automatic. 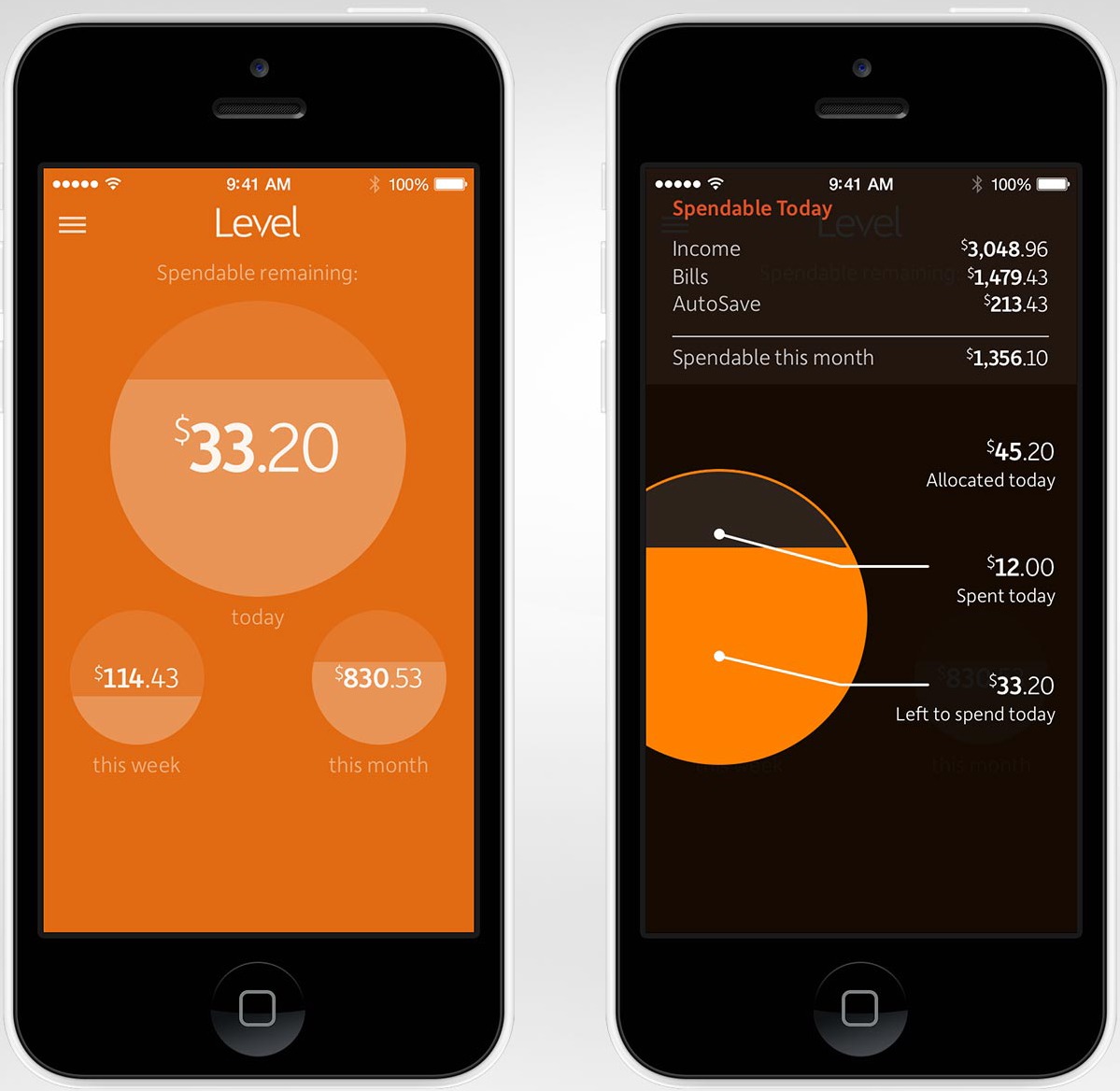 If there’s one thing that annoys me about Level Money’s interface, it’s that when I view a list of transactions, it often doesn’t mention where the transaction occurred. “You spent $136.02.” OK, on what, where? It’s usually not a big deal, unless I’m trying to analyze our monthly bills to see if they’ve fluctuated.

With a bit more intelligence, I think Level Money could easily solve this problem. For instance, if I could select a transaction called TRICOUNTYUTILITY, and label that as my utility bill, then the process would be far more automatic. Level Money already sort of lets you do that, but with the payee being unlisted much of the time, it falls short of being helpful.

That’s pretty much all to say about the interface. Level Money keeps it simple, and for me, that’s a huge step in the right direction. But, as with Mint, the Intuit back end — where Level Money gets its data — has some details you should be aware of.

First, Level Money’s support for specific banks is pretty limited, confined mostly to about 100 big national banks like Ally, Bank of America, and Chase. You can suggest a bank to the developers, but who knows how long it will take them to add it. Frustratingly, Intuit has access to almost every bank in the nation. Mint was useless to me before Intuit purchased it, because it didn’t support any of the banks I used. But once Intuit purchased Mint, that changed nearly overnight. It’s one of the few big acquisitions that worked out well for the end user.

Since Level Money works through Intuit, there’s almost no reason to have such a small list of banks. The developers claim it takes time to test each bank, and I can respect that, but somehow the Mint team was able to pull it off in short order.

But right now, I’m guessing you’re probably pounding your fists on the desk and shouting, “BUT WHAT ABOUT SECURITY? DO YOU EXPECT ME TO JUST HAND OVER MY BANK PASSWORDS TO SOME SKETCHY APP DEVELOPERS WITH NO APPARENT BUSINESS MODEL?”

Well, to be frank, that’s a definite concern. If you’re uncomfortable with the idea, I say to trust your gut and walk away — which is decent advice in general.

Level Money’s Web site has a standard security spiel about using 128-bit encryption, etc. But Dave Fayram, vice-president of engineering for Level Money, has been open about how their systems work. “If there is a security compromise, the attacker will never get your bank credentials. We don’t store them on your phone and we don’t store them on our servers,” said Fayram in a comment at Wired. Again, Level Money uses the same back end that Intuit uses for Mint, and Mint hasn’t had any major security failures so far (the New York Times explored Mint’s security policies in 2010).

Plus, Intuit’s, and therefore Level Money’s, connection to the banks is read-only, so it would take a full-fledged breach of Intuit’s databases before your accounts could be at significant risk. Even then, many financial institutions (including Ally, Bank of America, and Fidelity) offer guarantees that will reimburse any losses due to unauthorized account access if you report the problem promptly. Check your bank’s service agreement or search for the bank’s name and “online banking security guarantee.”

Like anything on the Internet, Level Money is a balance between security and convenience. But for me, the partnership with Intuit eases my concerns. Granted, many in the Mac community hold no love for the company, which has been jerking Mac Quicken users around for years. But Intuit has a good record when it comes to security, and I’ve never had issues with Mint.

Frankly, I’m more worried about individual bank security than I am about services like Mint or Level Money. I’ve used far too many online banks that limit my password to eight measly characters, which is frightening. Safer is a bank like Capital One 360, formerly ING Direct. It uses special read-only passcodes for services like Mint and Level Money, so even if your credentials were stolen, the attacker could only view your information, not transfer money or take any other action.

The Level Money app handles security in a similarly smart way. You don’t need a password to view how much you can safely spend, but you have to log in if you want to change settings or view more in-depth information. It’s a good balance between security and convenience.

One final comment. Since Level Money is geared toward Millennials (people born sometime between 1980 and 2000) it seems that every time this app is discussed online, the Millennial bashers come out in full force, with comments in the vein of, “These Millennials need a dumbed-down finance app because they don’t have their helicopter parents around to balance their artisanal checkbooks!” Speaking as a Millennial, I can’t resist sharing a few thoughts.

A 2012 survey showed that half of all Americans spend more than they make – a group that extends far beyond Millennials. Granted, the economy stinks and about 15 percent of America lives in poverty, but half of the survey respondents said they didn’t even set monthly savings goals. And another more recent survey suggested that 27 percent of Americans have no savings at all.

Put simply, we have a serious lack of financial awareness in this country, regardless of generation. Anything that helps make the complex world of finance more accessible and encourages people to save money is a good thing, and Level Money fits the bill. It offers a simplified way to budget your money and track savings, and although there are certainly security concerns, you have to ask if they’re more worrying than inadvertent overspending. For me, they aren’t.