We’re pleased to welcome as our latest long-term TidBITS sponsor Avatron Software, a Portland, Oregon-based developer of a variety of clever utility apps, including:

While Air Sharing and Air Login are indisputably cool, Air Display 2 is the one that really rocks my world. I’ve evangelized using multiple monitors on Macs since before some of our younger readers were born, and while adding a second monitor has become easier over the years, Air Display requires no hardware beyond what iOS devices and computers you already have lying around. You just need Air Display’s free host software on your Mac and a copy of the Air Display client software for the device you want to turn into a second screen.

I see two primary uses for Air Display. First is when you’re travelling and are limited to the small display of, say, a MacBook Air. Air Display lets you expand that by turning your iPad into a second display for the MacBook Air. It’s great for storing Photoshop or InDesign palettes, a Web browser window for reference while you’re writing in BBEdit or Pages on the Mac screen, or just keeping Messages visible while getting the app out of your way (and still being able to use a real keyboard). Even better, the iPad actually becomes a touch-screen display, so if you tap it, it’s just like clicking in that location with your Mac’s mouse. You can also mirror your display to the iPad, so you could, if there’s no projector for a
small presentation, let multiple people watch on iPads rather than looking over your shoulder — Air Display 2 can now extend or mirror your screen to up to four devices.

You’re not limited to using an iPad as a second screen, which leads to Air Display’s other primary use, which is expanding your screen real estate while at your desk, taking advantage of other computers you may have around. For instance, you could slave your MacBook Air to your iMac as a second screen or, better yet, put that PC you’re required to have to work as a second monitor. Air Display does work on an iPhone, which is perhaps more amusing than useful. It’s hilarious to see a tiny — but fully functional! — Dock
running down the edge of an iPhone screen. 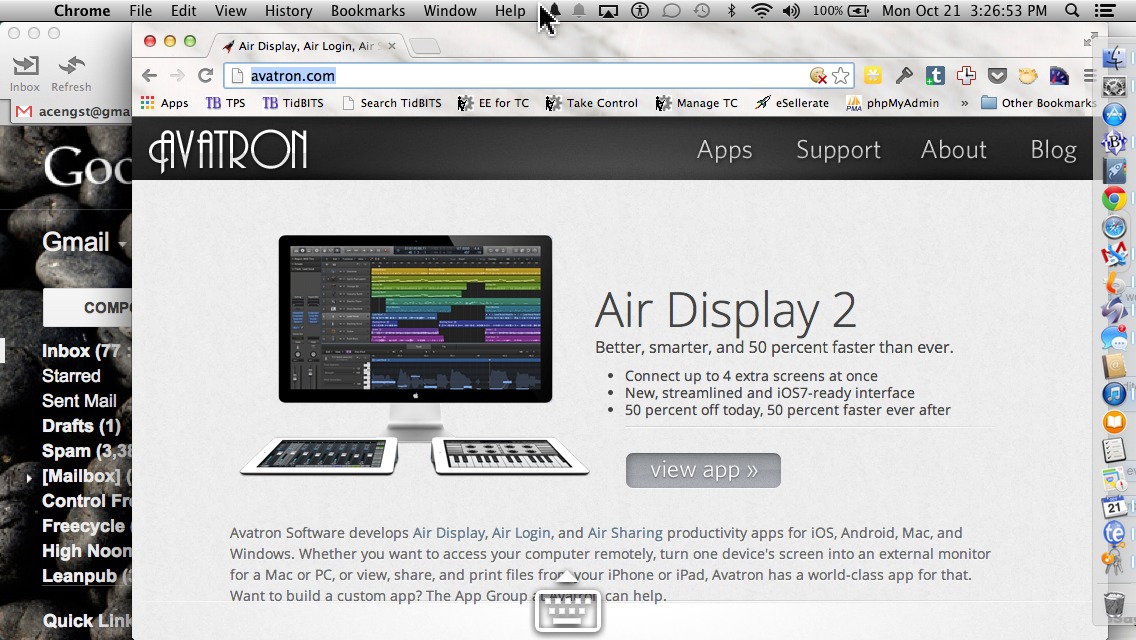 Of course, using even the speed-enhanced Air Display 2 over Wi-Fi won’t be as responsive as using a directly connected display, but as long as you’re not trying to play a video or use it for gaming, you probably won’t care. The productivity win from having more screen space far outweighs any annoyance of slightly slower screen drawing.

Thanks to Avatron for their support of TidBITS and the Apple community!