Apple has announced two new models of the iPad: the iPad Air starting at $499 and the iPad mini with Retina display, starting at $399. The iPad Air ships on 1 November 2013 with no pre-order available, while the iPad mini with Retina display will ship at an unspecified time in November. The first-generation iPad mini will remain available at a lower $299 price point, and, perplexingly, the iPad 2 lives on for $399. However, with the dismal iOS 7 performance on these older iPads, I wouldn’t recommend anyone purchase the iPad 2 or iPad mini at this point unless low price is paramount (and even then, a used third- or fourth-generation iPad might be
a better deal). 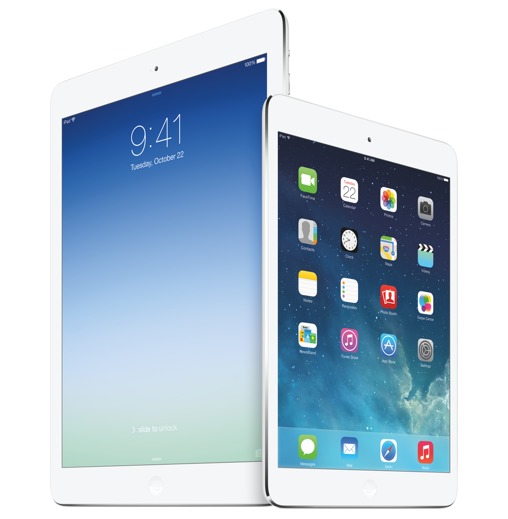 One of the LTE carriers added for the new iPads is T-Mobile, which is offering 200 MB of data per month — for life, even if you stop being a T-Mobile customer. The company will also offer, in addition to traditional monthly subscriptions, day and week passes. One day of 500 MB will cost $5 and a week of 1 GB will run you $10.

Interestingly, neither of the new iPad models features the new Touch ID fingerprint sensor of the iPhone 5s. This would have been welcome, as typing passcodes on the larger screen is a pain, and would have been an incentive to upgrade for users of the third- and fourth-generation iPads.

But perhaps the most surprising change to the lineup is the newly dubbed iPad Air, so called because it’s the thinnest, lightest, full-size iPad ever, at only 7.5 mm thick and weighing in at only 1 pound (453 grams). By comparison, the iPad 2 is 8.8 mm thick and 1.33 pounds (603 g). The iPad Air features the M7 motion processor featured in the iPhone 5s, which constantly stores movement data while using minimal battery power. Also included are dual microphones and improved backside illumination.

Which iPad model should you buy, assuming you’re looking for one? Unless you want the larger screen (perhaps for easier onscreen typing), the iPad mini with Retina display looks like the way to go. It’s still thinner and lighter than the iPad Air, and is $100 cheaper. The processor, battery life, and camera are identical on the two models, and the iPad mini nominally has a nicer display due to the finer resolution — 326 pixels per inch versus the iPad Air’s 264 ppi.

Is it worth upgrading from an existing iPad? Obviously, we haven’t been able to spend any time with these new models yet, but the promised performance improvements seem compelling, particularly for those accustomed to an original iPad or iPad 2. And for those who were interested in the first-generation iPad mini but held off because of its older processor and lack of a Retina display, the new iPad mini is tremendously attractive.